Black Farmers Breathe New Life into Agriculture in the South

Portraits of farmers working the land to reclaim history, change the future, and redefine local perceptions about Black farming. 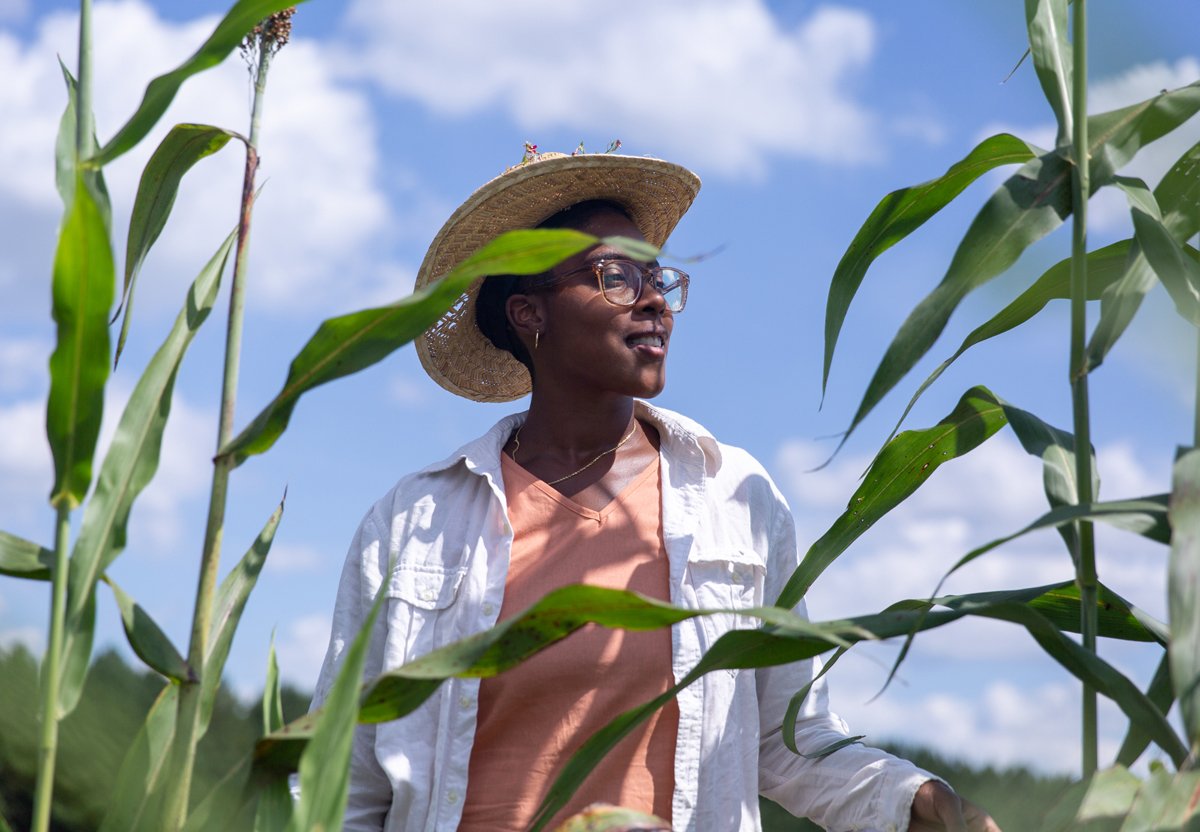 Eunice Hill came to Edgecombe County so Sly could fly.

Sylvester “Sly” Hill Sr. is her husband, an aerospace engineer from northern Virginia with a knack for tinkering, building and small details. At the end of a long gravel road just off Highway 33, the couple lives in a little brown farmhouse surrounded by herb gardens, animal pens, bee hives, and an overgrown runway for the single-seat aircrafts Sly builds by hand.

Inside, they display a veritable herboristeria of plants, herbs, and medicinal tinctures collected by Eunice over the 12 years they’ve called Edgecombe home.

The Hills are part of a community of Black farmers in the Rocky Mount area who are doing atypical work to breathe life back into Black agriculture in the South. Friends of theirs, such as Dallas Robinson and Earl Ijames, are focusing on history and education to help change the local perceptions about Black farming. 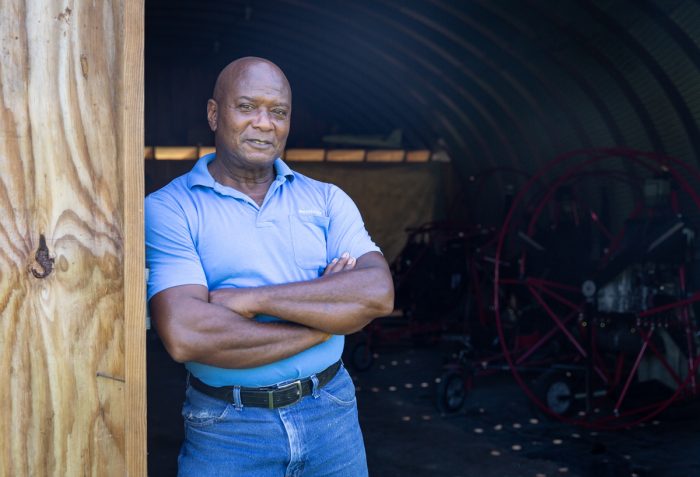 Sylvester “Sly” Hill Sr. in his hanger on the Hill Family Farm in Edgecombe County, N.C.

This past summer on the Hill Family Farm was a little different. A year ago, there might have been as many as 250 children on the farm on any given day, learning to feed Pancho the Mediterranean donkey, or observing as Sly delivers the kids of a mother goat. This was called the Youth Agricultural Summer Program, a skills-learning opportunity for low-income students and those with learning disabilities to earn extra credit toward their high school diplomas.

In the wake of a generational pandemic, Eunice and Sly must tend to the animals on their own again.

“Having the children out here, it brought so much life to this place,” says Eunice, gesturing out toward empty fields. The vegetables are still being grown and harvested, but the heart of the farm is missing.

The advent of COVID-19 canceled the 2020 summer program. In the past, the Hills, with the help of a few volunteers, taught the students where food comes from, how to care for animals, and how to prepare healthy food. Volunteers taught zumba, yoga and meditation.

“Animals are great teachers,” says Sly with a wry smile. “You gotta learn that if you walk behind a donkey, you’re gonna get kicked.” 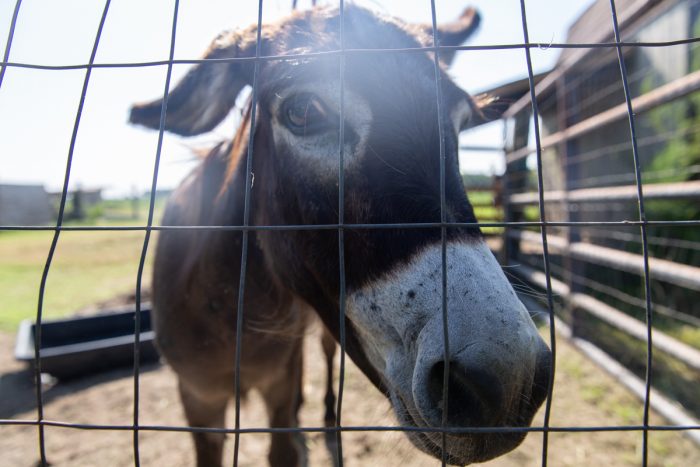 A mediterranean donkey stares at the camera at the Hill Family Farm in Edgecombe County, N.C. on August 30, 2020.

Eunice says that the Youth Agricultural Program doesn’t make them any money, but that the children are a worthy investment for the future.

“It’s important for us to make this a community of love and healthy living,” Eunice says. She learned the value of these things growing up in Puerto Rico, where, “you could go walk 10 minutes out of town and pick a dozen mangoes from a tree that everybody got to enjoy.”

Sharing, and helping others who have less than yourself, is part of Eunice’s faith and her core philosophy. From 2012 to 2015, she traveled around the country with the United Church of Christ, starting community gardens at parishes from Miami to Milwaukee. She even built a vegetable garden at the home church of President Barack Obama in Chicago. She loved this work, but in 2015 she lost her job and had to return to Edgecombe County for good.

It wasn’t long after that she got a call from the Enfield Middle School exceptional children coordinator, asking if she would take some exceptional students on her farm, to teach them life skills for extra credit.

The decision to welcome so many strangers into their home was not an easy one. But Eunice prayed. Sly tinkered. And in the end they opened their arms to a community of children, many of them Black and indigenous and Hispanic girls and boys who have been left behind in the local school system.

“I remember there was one little girl from town who didn’t really have much,” Sly says. “She saw one of these goats have a kid and she said to me and Eunice, ‘I can’t come to the program no more, but will you name this goat after me?’”

“We would see her time to time after that,” Eunice adds, “and she’d always ask ‘how my baby doing Ms. Hill?’ and I’d say ‘Well, now your baby’s got babies! Your baby’s a grandmother now!’ It’s experiences like that, they mean so much to these kids.” 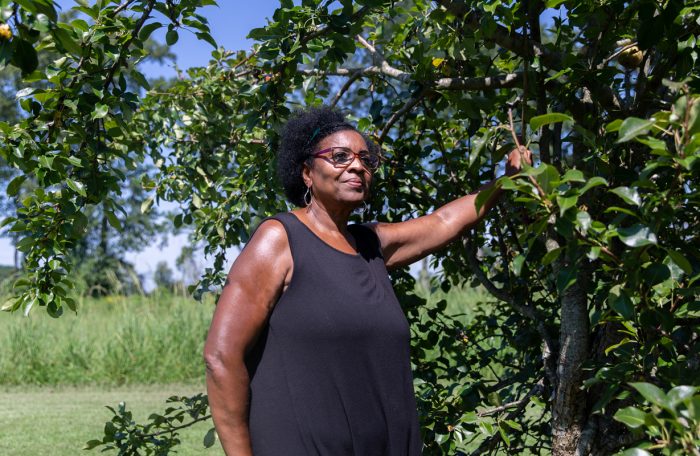 Eunice Hill in her garden outside her home on the Hill Family Farm in Edgecombe County, N.C.

Twenty miles down the road, in Nash County, some in the next generation are taking the future into their own hands.

Robinson grew up 15 minutes from the Freedom Farm, which is still in its first year of operation, mostly grass and cover crops with a few raised gardens to test the soil for future planting seasons.

The farm is for sustenance and sharing, she says. The concept of selling food into major markets has become less appealing to her the more she learns about how the agricultural industry can disparage Black people with predatory lending and land grabbing.

In the quest for a new method of sharing food with her community, Robinson reaches into the past to reclaim a heritage that has been systematically buried for centuries.

“I tell people, these were seeds that were braided into women’s hair, like Black African women brought this to you,” she says. “These were purposeful skills that were second nature for the people that were then deemed slaves. And just this skill set, this art and this craft was diminished by that rebranding of our ancestors as only slaves. I think acknowledging that we have this agricultural genius, the cultivation of healthy produce, is empowering and changes people’s relationship to land completely.”

She dons a straw hat with a bundle of flowers running through the seams, and makes sure to touch each plant she passes as she walks down the winding paths she made earlier this year. They are meandering and maze-like, jarringly distinct from the straight, industrial lines on other farms.

“I guess that’s the femininity in me,” she laughs. “My mom told me that the paths are very ‘me,’ whatever that means.”

Robinson wants her farm to be a beacon of education and of unlearning false interpretations of history. The name of the farm is two-fold, for Harriet Tubman, whose courage to return again and again to the land of slavery to free her people inspires Robinson, and for Fannie Lou Hamer’s Freedom Farm, a name generally absent from Black history. Hamer was a Civil Rights leader from Mississippi, who in the 1950s and ‘60s radicalized her small town to support voting rights and the empowerment of poor people both Black and white.

“People don’t remember Fannie and her legacy for a lot of reasons,” Robinson says, “because she was loud and fat and talked about economic empowerment. But that’s a voice people need to hear now, like right now, and a voice I want to honor by naming this farm for her.”

Robinson has an appreciation for history, and questions always how it’s told and for what purposes. But to really get a deeper understanding of how the teaching of history has maligned Black farmers, she says, “you gotta talk to Earl.”

A little closer to Raleigh, on the eastern edge of Wake County, most people know Earl Ijames as ‘the palm tree guy.’ Earl is a farmer, a horticulturist and a historian, a man whose love for the land and its trees is only surpassed by his passion for uncovering the hidden truths of the past. He works as a curator for the North Carolina Museum of History, and in the past has worked as an archivist, a bookseller in Wendell, N.C., and as a salesman of native palm trees across the state.

“Trees tell important stories, especially in North Carolina,” Ijames says. “Case in point being the origin of the term ‘Tar Heel.’ How many people know the truth behind that story? That it comes from the history of the longleaf pine tree and the legacy of enslaved people working these forests to extract tar pitch . . . before it was a rallying cry for white soldiers, it was a derogatory name.” 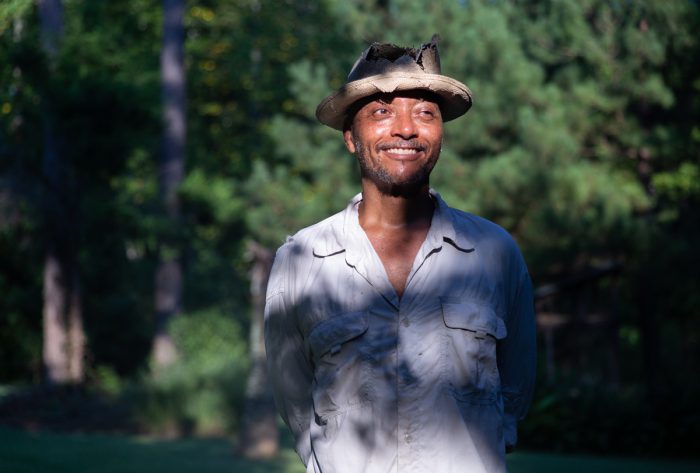 Earl Ijames outside his house in Wake county, N.C.

Stories like these are why Ijames has worked to save the Carolina longleaf pine from extinction. His garden is full of pine saplings, seeds that he hopes can keep the legacy of those enslaved people alive in the landscape itself. He is adamant that the teaching of history, especially Black history, has been warped so far from the truth that even contemporary historians often argue on false premises.

“There’s so many moments in history, from the Civil War to the Emancipation Proclamation to, yes, the Black Panthers, that are talked about through the lens of whatever narrative became dominant at the time . . . there are these forces of resistance, of struggle, that were passed off as aggression or just plain washed away by white folks writing the stories of the time.”

Ijames’ father was a member of the Black Panther Party in Winston-Salem during the 1960s and ‘70s. He can remember his father and other Black Panthers walking children to school, providing them with lunch money, and encouraging young people to vote.

“I used to be kind of an angry person,” says Ijames, referring to the discrimination his family faced. “But I can’t go around angry at people about something that, even if I go in and get all my guns and go try to do something about it, there’s nothing I can really do. But vengeance is the Lord’s. And the Lord told me good living is the best revenge.”

He gestures to his land, his family and the refurbished Victorian house he lives in among the pines. “And you tell me, ain’t this seem like good living to you?” 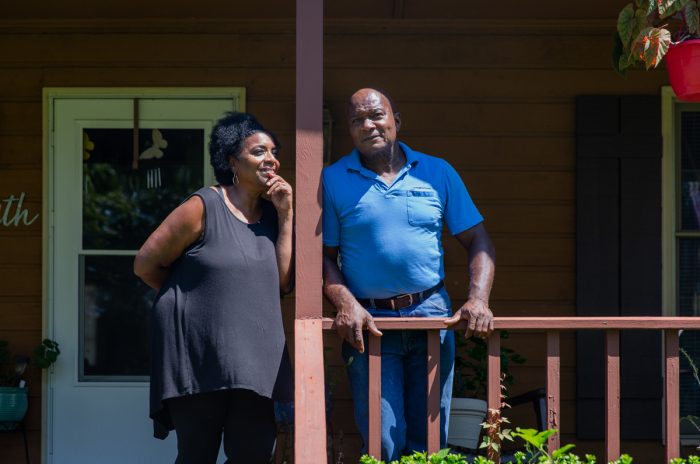 Eunice Hill and Sylvester Hill Sr. pose for a portrait on the porch of their family home at the Hill Family Farm in Edgecombe County, N.C.

Earl aims to reclaim history in the same way that Dallas Robinson aims to reclaim the future, and much the same as Eunice and Sly Hill hope to reclaim their community right. In a land scarred by generations of suffering, all of their voices are working together to heal and to educate, to unlearn and forge a new path forward.

Back on the Hill Family Farm, Eunice, and Sly want to keep their farm the way it is, and for them that means coming home at the end of the day to find friends and neighbors sitting on the porch, just enjoying the peace and quiet of an Edgecombe County evening.

“People like to come here,” says Eunice. “People like the trees and the plants and the farm animals . . . that’s why we opened up our farm to everyone in the first place. The people need some land to reflect and take a second to just sit.”

This article was produced by, and originally published in, the UNC Media Hub, and is reprinted with permission.

Drew Wayland is a senior at the University of North Carolina, majoring in journalism with a minor in creative writing. He has reported for news organizations in South Africa, Canada, and the Netherlands. He hopes to pursue a career in environmental or human rights journalism. Read more >