Bailouts Not Enough to Keep Ginseng Farmers in Wisconsin Afloat

Sitting at the nexus of trade wars, bailouts, and elections, farmers in the state—which produces 95 percent of the country’s ginseng crop—are struggling to survive. 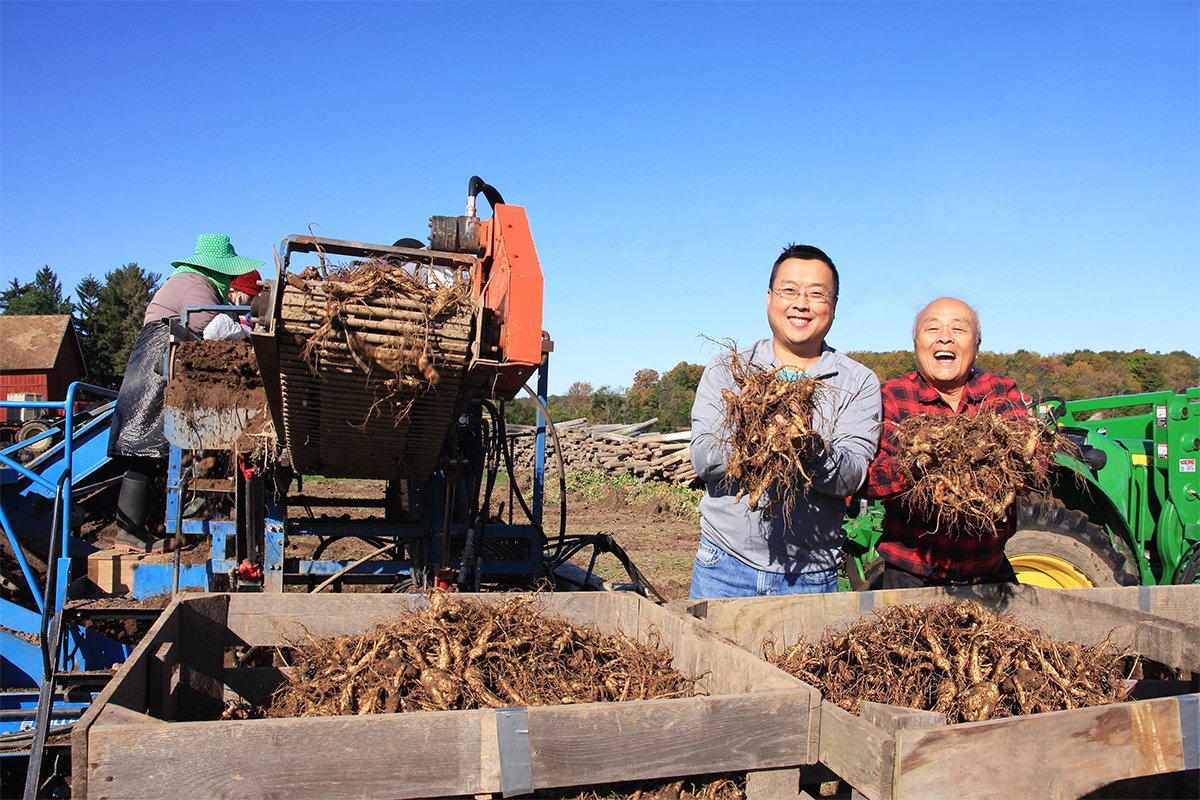 Joe Heil has been farming ginseng in rural Central Wisconsin for 25 years. He is the owner of Heil Ginseng Farms, a fourth-generation family business. Producing up to 150,000 pounds of roots per year, Heil Ginseng is one of the largest ginseng farms in the United States. Yet despite its longevity and scale, Heil is struggling to keep his business afloat. Expensive tariffs amid trade wars between the U.S. and China were the initial blow to Heil’s sales, followed by the coronavirus.

“I’ve been in the business for 25 years, yet I do not want to be farming right now,” Heil said. “I cannot keep borrowing more and more money each year if I can’t pay it back. It just financially doesn’t work.”

Like Heil’s farm, the entire Wisconsin ginseng industry has suffered from severe losses since the Trump administration declared a trade war on China in 2018. American ginseng farming is a small industry, almost entirely concentrated in Marathon County. One hundred fifty ginseng farms—up to 10 acres (30 acres in total root undergrowth) each—operate in the county, many run by Hmong and Latinx farm workers.

Even with its small geographic size, the industry produces a total of 1.2 million pounds of roots per year—representing around 95 percent of the annual American ginseng crop. Known for its medicinal benefits, the crop is largely exported to China, Taiwan, and Hong Kong, contributing an average of $40 million per year to the Wisconsin economy.

But with increasing tariffs and travel restrictions, ginseng farmers are facing hefty taxes and a severe dip in product demand—imminent threats to the survival of the industry. Although President Trump announced during last month’s rally in Wisconsin that the government would be paying out an additional $13 billion in new farm aid “to help farmers . . . including Wisconsin’s incredible dairy, cranberry, and ginseng farmers who got hurt badly,” the industry is on the ropes, and ginseng farmers are feeling the pain. The state’s ginseng farmers say they need more than intermittent—and unevenly distributed—bailouts in order to survive.

Located north of Wausau, Wisconsin lies Hsu’s Ginseng Enterprises, an American ginseng operation that covers more than 1,000 acres of land and employs more than 100 staff employees and seasonal Mexican farm workers on H-2A visas. Second-generation ginseng producer Will Hsu is the president of the farm, taking over the business his Taiwanese immigrant father began in 1972. Hsu’s business is said to be one of the most successful ginseng producers in the world. Still, an operation as profitable as Hsu’s was by no means insulated by trade wars.

“It’s just been punch after punch to the industry, starting with tariffs as they escalate,” Hsu said.

Marathon County’s ginseng industry faced immediate decline once the trade wars began. Since July 2018, tariffs on U.S. agricultural commodities rose from a 7.5 percent value-added tax to 50 percent. In 2019, the state’s agricultural exports to China fell by 28 percent. As a result, Wisconsin ginseng prices dropped from $50 per pound to roughly $20 per pound, according to Hsu. 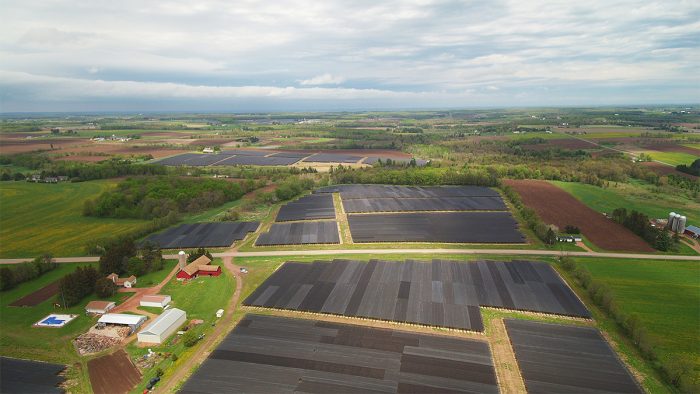 “Ginseng used to bring in $50 to $80 million dollars of economic value directly to the farms,” Hsu said. “And now we’re probably a third or a quarter of that, because the prices have continued to drop year after year. Almost all of that money came in from abroad.”

The pandemic landed an additional blow to their operations and sales, decimating the domestic market, says Hsu. Travel restrictions to and from China hindered foreign customers from purchasing Wisconsin ginseng. In addition, Hsu believes that American customers are buying less ginseng due to the pandemic’s impact on consumer behavior and anti-Chinese discrimination amid Trump’s “China Virus” rhetoric.

At the beginning of the trade wars, Hsu’s ginseng farmers were unable to sell their crop supply because of expensive tariffs. The excess ginseng supply, which can be stored dry for up to five years, has only accumulated since the pandemic reduced its demand. “Now the domestic business is hurting, and we have a much smaller international segment of the business,” Hsu said. “I don’t really know where the recovery starts. Hopefully soon.” 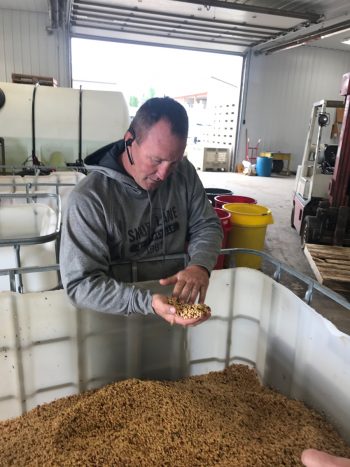 As a result of tariffs, ginseng producers in Wisconsin have been paying double the amount of ginseng export taxes compared to Chinese producers, according to Heil, who also serves on the board of directors of the Ginseng Board of Wisconsin. The imbalance in taxes is hurting Wisconsin ginseng farmers, since they are unable to compete with Chinese prices. “We haven’t seen prices this low in 35 to 40 years,” Heil said. “So financially, we’re struggling. We’re just hoping that the price of ginseng eventually comes back up.”

The decrease in demand for Wisconsin-grown ginseng has coincided with rising costs of production, adding to the financial blow on Heil’s farm. “My labor goes up, my land rent, everything goes up,” said Heil. “But my prices keep going down.”

Researchers Are Uncertain About The Future of Wisconsin Ginseng

Eric Burkhart, a ginseng expert and a botanist at Penn State University, talks regularly with Wisconsin’s ginseng farmers. He is aware that Wisconsin ginseng is recognized as a high-quality product in the global ginseng marketplace, its reputation serving as the foundation for the farmers’ deep relationships with Chinese buyers. Trade wars, however, corroded these ties, lowering the demand for it.

“It takes a lot of time to get these relationships going,” Burkhart said. “And when you pull the rug out from under, it’s not helpful.”

“The deteriorating U.S.-China relations and the negative income shocks for Chinese households led to a substitution of imported ginseng with domestically grown products in China,” Zhang explained by email.

In addition, ginseng is not as adaptive as other export-heavy crops grown in the U.S. The crop takes up to five years to grow, and lacks alternative domestic channels that crops such as corn have.

The pandemic also imposed additional barriers on Chinese buyers, says Zhang. Travel restrictions prevent buyers from visiting Wisconsin to check on the quality of the products, and coronavirus fears over contaminated shrimp and salmon imports have prolonged the customs inspection process.

Farm Aid Is Helpful, but Far from Adequate

In response to the financial losses across American agriculture this year, the Trump administration announced two farm aid packages to help offset the damages. The U.S Department of Agriculture (USDA) announced the Coronavirus Food Assistance Program in April that provided $19 billion in relief for farmers and ranchers who were hurt by the pandemic. Under the additional $13 billion in aid Trump announced in September, farmers will receive up to $250,000 in aid, based on the amount of annual sales lost per farm. 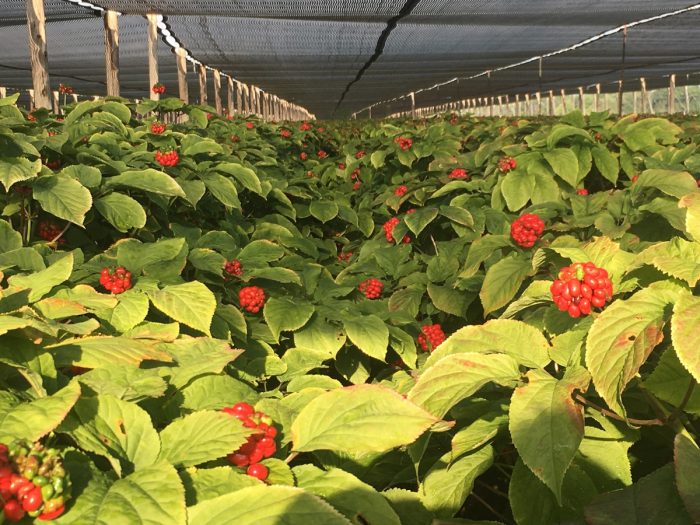 The first aid package wasn’t without faults, prioritizing larger farmers over small ones, and excluding some farmers entirely, National Farmers Union president Rod Larew said in a statement after the Trump announcement.

Heil was one of those farmers who didn’t qualify for aid. “Ginseng farmers got none,” Heil said. “No aid meant no sales and no cash flow.”

Jim Schumacher, owner of Schumacher Ginseng Farms, also did not receive aid in the first round. As of now, he’s only received $3,500 in relief payments from the Wisconsin Farm Support Program. “In the grand scheme of things, it isn’t a lot,” Schumacher said. “But obviously, everything helps.”

While it is not clear how much farm aid ginseng farmers will receive in the second wave, Hsu believes that the payouts will be minimal due to the size of the ginseng industry relative to meat and dairy. “Ginseng is uniquely positioned in agriculture,” Hsu said. “Because the industry is so small, the payouts are going to be very small.”

Given the industry’s size, annual ginseng output and current prices, Hsu predicts that ginseng farmers will receive no more than $3 million out of the $13 billion pie, less than 1 percent of the second round of agriculture bailouts.

Small ginseng farmers are especially at risk for aid denial, says Hsu. “If farmers can’t prove to the government that they had any sales, they may not qualify for aid,” Hsu said. “And so the people who need it most may not receive it.”

Schumacher expects a fair amount of aid from the second round of bailouts. While grateful for the relief, he does not think it’s enough for ginseng farmers to sustain their farm operations. “It helped a lot of the farmers here, but it’s not anywhere close to what we’ve lost in business,” Schumacher said. “There are many farmers getting into ginseng harvesting now that are really struggling.”

Like Schumacher, Buckhart doesn’t believe bailouts are long-term solutions. He sees the bailouts as an ineffective band-aid for the challenges facing the industry .

“There’s no reason for this kind of posture,” Buckhart said. “Bailouts are not going to fix that harm.”

Will the Election Save Wisconsin Ginseng?

Ginseng farmers say they are being left behind by an administration that continues to purport its support for small farmers. However, Trump’s announcement of additional farm aid in Wisconsin—a crucial battleground state—may help drum up support among rural Wisconsin voters.

Although farmer support for Trump’s re-election has fallen since April, Heil believes that another Trump presidency is crucial for Wisconsin’s ginseng industry to recover. “I’m optimistic that if Mr. Trump wins, we can turn the industry around,” Heil said.

Despite Heil’s support for a Trump re-election, he criticizes the Trump administration’s refusal to prioritize the needs of Wisconsin’s ginseng farmers. Heil has repeatedly expressed his concerns to public officials to no avail and is frustrated by what he perceives as their ignorance.

“We’re good, honest, hard-working people, and that’s where I feel the administration truly doesn’t understand what we go through every day,” Heil said. “We have people [in office] who come up with all these regulations and extra standards that hurt working people, yet they don’t realize the impact. It’s not important enough for them to care, which is sad.”

Schumacher, who’s harvested ginseng for over 50 years, doesn’t think that a change in administration will impact the future of Wisconsin ginseng. The real concern, according to Schumacher, is the U.S. Fish & Wildlife Service (USFWS). The USFWS requires ginseng farmers to apply for endangered species permits in order to export ginseng abroad. Permits were required after the Convention on International Trade in Endangered Species of Wild Fauna and Flora (CITES) identified wild ginseng as being at risk for extinction, with researchers finding a strong link between climate change and the decline of American ginseng.

Schumacher laments how permits act as trade restrictions for ginseng farmers whose sales are reliant on exports to China. “It’s not the politicians,” Schumacher said. “It’s those people who have been working in the USFWS who are reluctant to change anything.”

While Schumacher remains optimistic that the industry will turn around once the pandemic is over, Heil longs for a more immediate solution. “I just hope I can survive,” Heil said. “I have kids who want to be third-generation ginseng farmers. But if this continues, there will no longer be ginseng in Wisconsin.”

Aaron Mok is a freelance journalist who covers climate, agriculture, and social justice. His work has been featured in Politico, GreenBiz, Food Tank, and more. Read more >