The nationwide shelter-in-place orders have led to a surge in purchases of certified USDA Organic foods, with much of the growth coming from industrial-scale farms. 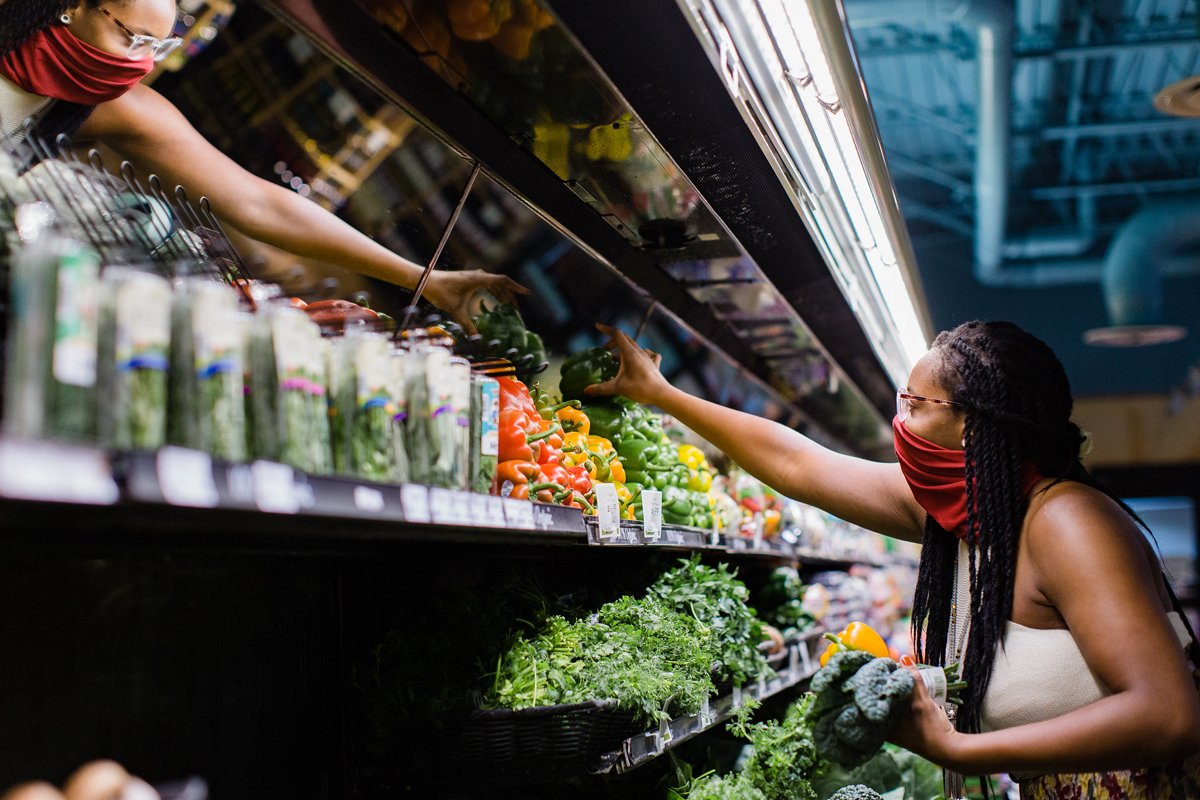 When COVID-19 forced communications consultant Kyle Freund and his wife to work from home this spring, the Madison, Wisconsin couple and their 5-year-old daughter began seeking out organic produce from small local farms. They stopped patronizing large supermarkets, shopped only at the co-op, and subscribed to a community supported agriculture (CSA) program through a nearby farm.

“It’s become a priority for us, knowing where our food comes from,” said Freund.

He’s not the only one. For all the disruptions it has caused, the COVID-19 pandemic has been a boon to organic food sales, with sales increasing in double digits and outpacing conventional produce sales—a phenomenon that has been touted by the organic industry.

But the image of Americans flocking to buy organic produce at farmers’ markets and through CSA programs is somewhat misleading when it comes to the growth of organics, according to some food advocates. Direct-to-consumer organic produce sales, which have skyrocketed during the pandemic, still account for a very small percentage of overall organic sales. Instead, far from the ideal of small family operations feeding local communities, much of the recent growth has come from industrial-scale farms.

Linley Dixon, a small organic farmer in Durango, Colorado and the associate director with the Real Organic Project, says that large organic agribusinesses are squeezing out small and mid-size farmers and taking over the industry.

“My concern is that the shelf space for real organic is usurped by industrial, shallow organic,” Dixon said. “What people really want is real organic: soil-grown and pasture-raised.”

But others in the industry say those large-scale organic farms bring important benefits.

“The idyllic five-acre organic farm that only sells within a five-mile radius . . . won’t feed many people. Shouldn’t organic be something people of all incomes can avail themselves of?” said Kathleen Merrigan, executive director of the Swette Center for Sustainable Food Systems at Arizona State University and former U.S. deputy agriculture secretary.

The U.S. organic food sector has seen steady growth in recent years. New data from the U.S. Department of Agriculture’s (USDA) National Agricultural Statistics Service (NASS) 2019 Certified Organic Survey shows the number of certified organic farms increased by 17 percent to 16,500 between 2016 and 2019, and the number of certified acres rose by 10 percent to 5.5 million.

The survey shows sales of certified organic commodities—produce, livestock and poultry products—were up 31 percent from 2016, when the previous survey was conducted. The largest organic farms (with sales of $500,000 or more) accounted for just 17 percent of all organic farms but represented 84 percent of all sales.

Overall, organic food sales have doubled over the past decade to $50.1 billion in 2019, according to the 2020 Organic Industry Survey released by the Organic Trade Association (OTA). Nearly 6 percent of the food Americans now eat is organic.

COVID-induced pantry loading has further expedited that trend, with organic food growth in the double digits month after month, consistently outpacing the growth of conventional food. In March, total organic produce sales increased by 22 percent from the previous year—growth that was significantly above the increases of January and February of this year. Organic sales could likely have been higher, said the report, but they were hampered by the limited supplies of food in supermarkets. 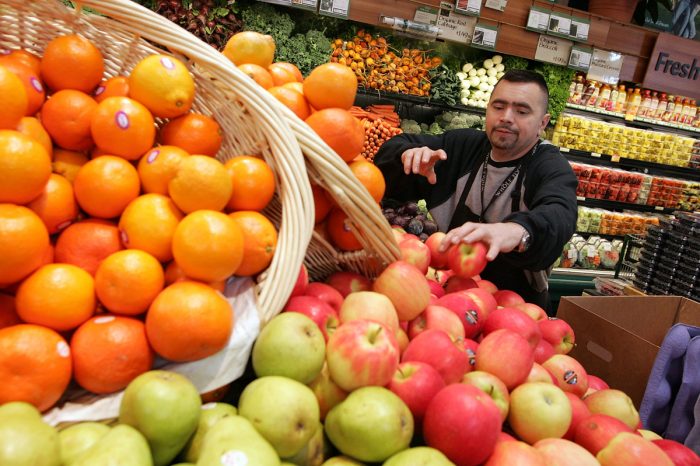 Even after the initial panic-buying, organic produce sales continued to grow during the second quarter of the year, again exceeding growth rates for conventional produce. Organic fruit and vegetable sales increased 17 percent from April through June, as compared to the same time period last year. Bananas, carrots, and apples—which have the smallest organic premiums and also are more shelf-stable—saw the highest produce sales by volume.

Some consumers, like Freund, the Madison consultant, upped their support for small organic farmers because they “can provide safer, more distributed networks and avoid some of the bumps and shortages the global supply chain experienced this spring,” Freund said.

But the type of direct-to-consumer sales that have soared during the pandemic make up just 5 percent of total organic food sales, according to OTA. Most of the increase in sales has occurred in supermarkets. According to the NASS survey, just 2,993 of the 16,585 farms in 2019 sold directly to consumers, accounting for just $300 million of the $9.9 billion in total organic commodity sales.

One of the main reasons for the growth is that organic food is mostly linked to eating at home, which increased significantly as Americans adjusted to quarantine, said Laura Batcha, CEO and executive director of OTA, which represents more than 8,500 member companies across the supply chain. While there are no hard statistics to prove it, the vast majority of farmers’ sales go through retail channels, Batcha said. (Before the pandemic, food service menus had also seen a rise in organic produce.)

“If people are shopping and eating from their own fridge, it’s more likely to be organic than if they’re going into a shop or cafe from their office,” Batcha said. “When we can control our choices, people choose to eat more organic food.”

Another part of the appeal of organics, Batcha said, is that consumers associate it with health—something that has been much sought after during the pandemic. Organics are also more affordable and accessible than ever, she added, available through SNAP, Costco, bargain food outlets, and through the less-expensive organic private labels (store brands) at grocery stores.

And the trend is likely to hold into 2021, even after the pandemic is over, she said, given that a number of major companies such as Indeed and Google have extended their work-from-home policies by a full year and others like REI have announced plans to allow their employees to work remotely indefinitely.

The rise in organic sales doesn’t reflect a rise in the kind of organic farming Dixon, with the Real Organic Project, wants to see more of. Yes, small organic farmers have seen an increase in sales (Dixon’s own sales tripled at her mixed vegetable farm of five acres, allowing her to expand and add a new greenhouse), but those sales are tiny, she said, when compared to the large agribusinesses producing the bulk of the organic food.

That’s because while smaller organic farmers may thrive through direct sales, they can’t often sell their products to grocery stores, said Dixon. Because of the power they yield in the marketplace, large-scale organic farms are undercutting small and mid-size farms in retail sales and in some cases pushing them out of business, she said. This includes milk from organic mega dairies whose cows produce more than 450 small dairies put together and poultry raised in large chicken barns that feature tiny, screened-in porches as “outdoor access.”

One of the biggest threats to smaller-size farmers, according to proponents of Real Organic, comes from organic hydroponic operations, which grow produce without soil, using a substrate such as coconut husks, and rely on a liquid feed to supply nutrients to the plants. Such practices, said soil-based blueberry farmer Hugh Kent, give hydroponic farms an unfair advantage and go against the original intention of the USDA organic standards, which focused on improving soil fertility, rather than simply cutting out certain pesticides and synthetic fertilizer.

In addition, hydroponics operations often rely heavily on plastic to keep the substrate in place. “Consumers don’t realize that when they’re buying hydroponically grown berries, they’re often supporting enormous farms that degrade the quality of the soil and create unrecyclable plastic waste,” said Kent, who grows on 20 acres in Eustis, Florida. “It’s the same kind of industrial agriculture that organic buyers typically are trying to avoid.”

Dixon said these type of organic operations keep the number of smaller-size organic farmers low, and prevent many existing operations from growing. “Without the mega-farms, the growth of small organic farms would be so much further along,” she said.

To help shoppers choose food from family farms the group supports, the Real Organic Project officially released its new Real Organic label last week, with 430 farmers certified across the country. The label is meant to distinguish soil-grown and pasture-raised products under the USDA organic label. And it’s only one of several efforts designed to distinguish food that is grown in a manner that goes beyond today’s organic standards. The new Regenerative Organic label—created by a Patagonia, Dr. Bronners, and Rodale Institute—is another example.

Big Organic Has its Benefits

But some experts say the growth of organics has value, even if it’s not all small producers who benefit.

As Merrigan sees it, the growth of larger organic farms has allowed Americans across all income levels and racial groups—82 percent of households—to eat some percentage of organic food.

“Some see the sale of organic food at Walmart, Target, and Costco as a sign that something is wrong with organics, that something is foul with the organic standards,” Merrigan said. “But . . . part of providing access is scaling up and making organic mainstream. It should not be the domain of wealthy people.”

Scale, she said, is also relative depending on the crop. A thousand-acre wheat farm in Nebraska is not considered large, while that size would be seen as enormous in Vermont.

More acres in organic production also translate to fewer synthetic pesticides, fertilizers, and other chemical inputs. And staying small, she added, doesn’t necessarily equate with stellar adherence to the standards. Some small organic farms have problems, too, including poor food safety, animal welfare, and environmental practices, while some very large farms excel in those areas.

The main focus, Merrigan said, should be to strengthen oversight, beef up funding for the organic program, and continue updating the organic standards, something the USDA has been slow to support. Despite recent challenges, like oversight failures on fraudulent organic grain imports, loopholes that allow large dairies to skirt the rules, and the Trump administration’s withdrawal of an improved animal welfare rule (which is still playing out in court), she still sees the organic program as “strong and rigorous.”

“I believe the vast majority of organic producers are following the rules and want stricter rules because that gives them the market differentiation, which gives them the higher premiums,” added Merrigan.

Despite the growth of industrial-scale organic farms, many Americans still can’t afford organic food. And COVID-19 has only deepened that access gap by leaving millions unemployed and struggling to put food on their table.

For Christa Gutschenritter, a Portland-area mom whose family experienced “a major financial hit” as a result of the pandemic, buying organics is no longer an option. Gutschenritter, a wedding photographer who also sells craft kits from home, and her husband, who runs a dog boarding business, saw 30 percent of their income disappear overnight this spring. Their businesses have not recovered since then.

Before the pandemic, the family routinely ordered food from Whole Foods and Walmart, spending at least $650 per month on groceries. They also regularly visited the local farmers’ market and other stores. About half of the food they bought was organic—especially milk and produce for their three children.

When COVID-19 hit, the couple immediately cut their grocery budget and eliminated organics. A few months ago, the family joined Birch Community Services, a nonprofit organization on the edge of Portland that runs a members-only food bank for working families under financial stress. Because Birch redistributes food that would otherwise go to waste, it sometimes offers its members organic produce—an option Gutschenritter appreciates more than ever.

And like many things that have become out-of-reach for a large swath of Americans since the pandemic began, organics run the risk of being seen as symbol of the deepening income divide in this country—regardless of how they’re produced.

“Organic food is [now] a real a luxury,” said Gutschenritter.

Top photo CC-licensed by the city of St. Petersburg.

Reporting for this story was underwritten by a grant from Organic Valley.