Without a 'Right to Garden' Law, It May Be Illegal to Grow Your Own Food | Civil Eats

How one Illinois family's backyard hoop house put them at odds with city officials.

The most delicious vegetables are the ones you grow yourself, as many have come to realize during the pandemic. But some cities and counties have restrictions that prevent people from gardening at home. In one Midwestern town, a temporary greenhouse has ended up on the wrong side of the law, revealing a value system that is distinctly regressive.

Nicole and Dan Virgil, who live in Elmhurst, a suburb of Chicago, are dedicated vegetable gardeners. By the summer of 2015, they had maxed out their 2,000-square-foot backyard with raised beds and were relying on them for much of their family’s produce. They had branched out from simply growing the typical salad ingredients to cultivating potatoes, fennel, leeks, and tomatillos. In late August, the plants were still going full-bore, and the Virgils wondered how they could extend the Midwestern growing season. (In this climate zone, seedlings go into the ground on Mother’s Day and peter out in October.)

“It seemed like such a shame that everything would come to a dead stop once the temperature dropped,” says Nicole, who is among an estimated one-third of all Americans who have grown food at home. “We really wanted to make a dent in our grocery bill and in our carbon footprint—we didn’t turn our whole backyard into a garden just to have a few token vegetables.”

After doing some online research, Dan built a “high-tunnel” hoop house to protect two of the larger garden beds. The temporary greenhouse, made of plastic sheeting over a frame of PVC pipe and plywood, was nine feet tall at its apex. It was big enough to produce sufficient heat to warm the soil and allow the Virgils to stand inside while gardening in frigid conditions. In more temperate climates like California’s, farmers use hoop houses to protect delicate blackberries and raspberries from dew and fog.

A few weeks after their hoop house went up, Nicole found a violation notice from the city taped to it. “I thought it had to be some kind of misunderstanding, that it couldn’t possibly be serious,” recalls Nicole. She had assumed that the hoop house, a lightweight temporary structure akin to a tent, wouldn’t be subject to city regulations.

After several discussions with city officials, 16 public meetings over two years, a lawsuit filed by the Virgils, and a subsequent appeal, the city remained unmoved, siding with the neighbor who had filed the original complaint. The Virgils found themselves stuck in a catch-22 of having an unpermitted temporary structure while having no way to get a permit for a temporary structure. Facing a daily fine, they took down their hoop house. 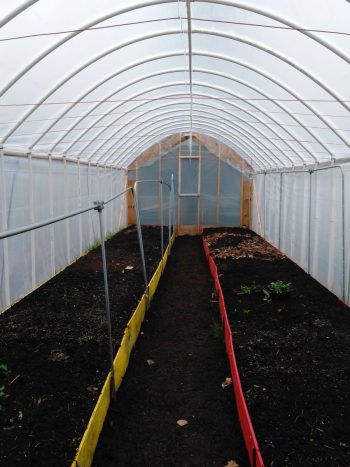 Inside the Virgil’s hoop house.

Why would a backyard hoop house be so contentious? The Virgils are among many home gardeners around the country who have triggered a city or county ordinance that restricts edible gardening. It’s fairly common for local governments to have a broadly written landscape ordinance, which may not explicitly prohibit vegetable gardening but requires grass or similar vegetation and calls for plants within a certain height.

The neatly manicured yard has long been a status symbol; lawns first appeared in the 1700s on European estates, whose owners could afford to have high-maintenance living carpets. And the suburbs have historically differentiated themselves from “ag land.” “A lot of rural land was developed into suburban municipalities, and the zoning code was changed to prohibit agricultural uses—people didn’t want a pig farm to move in,” says Laura Calvert, the former executive director of Chicago-based nonprofit Advocates for Urban Agriculture.

Given the context, it’s easy to see how the neighbors might look down on home gardening as a form of subsistence farming. “People think that it’s beneath them,” says Nicole, who documented her struggle in a recent op-ed for the Chicago Tribune.

The goal of these ordinances, whether they’re about landscaping or temporary structures, is to maintain property values. (The racist practice of redlining, which kept African Americans out of the suburbs, was rationalized in the same way.) However, the perception that growing vegetables will drive down home values is “not rooted in any evidence,” as Calvert points out.

Now the pandemic shutdown is shifting these cultural attitudes. For the first time in a long while, people have seen empty shelves in grocery stores and witnessed hoarding. The past months have been a visceral reminder of how important it is to have access to healthy food, which no doubt prompted many to start planting. Elmhurst’s neighbor, Chicago, is ahead of the curve; it embraced hoop houses in its 2011 ordinance promoting urban farming while still regulating them with restrictions on their size and height. “We have broad mayoral support for urban agriculture,” says Calvert. “It provides all these benefits, including food access, public health, and public education.” 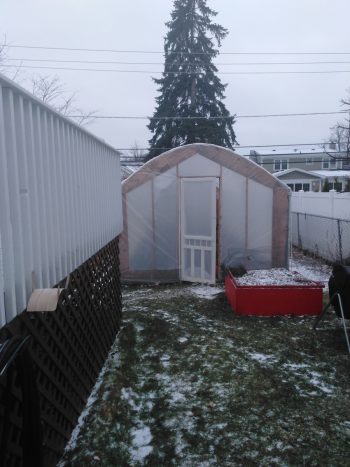 The Virgil’s hoop house in winter.

In addition to these imperatives, there are also philosophical and legal principles to defend. On a basic level, the right to garden year-round can be encapsulated as the right to do what you want in your own yard. The Virgils are advocating for a state Right to Garden bill, which would override local ordinances. They’ve joined forces with attorney Ari Bargil at the nonprofit Institute for Justice, which works on constitutional law cases and helped pass the first such gardening bill in Florida.

Bargil sees restrictions on home gardening as a violation of a fundamental right: “We have the right to use our own properties to grow our own food, as long as that use doesn’t impinge on someone else’s freedom to enjoy their property.” And he feels that landscape ordinances smack of authoritarianism. “If a vegetable garden is attracting pests, it has a bearing on the health and safety of a community, and that should be regulated,” he says. “But if the government is acting like Disney World and specifying what your front yard should look like, that’s not a vision of a free society.”

The Right to Garden bill in Illinois has been through three rounds of revisions and should go before the state legislature in its next session, which begins in early 2021. The Virgils are cautiously optimistic that their cause will prevail. “I’m just trying to do something good,” Nicole says. “I want to help people live well and help each other and have food in abundance.”

This article was originally published by Sierra, and is reprinted with the permission of the author. Photos courtesy of Nicole Virgil.

Lydia Lee is a freelance writer in the San Francisco Bay Area, focused on architecture and design. She got her start writing about technology and was a reporter for The Industry Standard and Salon.com during the first dot-com boom. She’s been an editor at California Home+Design, The Architect’s Newspaper, and Remodelista. Read more >