What Impacts Do the West Coast Wildfires, Smoke Have on Crops? | Civil Eats

What Impacts Do the West Coast Wildfires, Smoke Have on Crops?

In the midst of weeks of poor air quality, wine grape and cannabis growers try to assess the damage of the ash and smoke on their crops, as well as to human health.

On September 12, Iverson Family Farms posted ominous images on social media of their fields under a ruddy red sky, thick with a stagnant, dense haze—a stark contrast to the vibrant annual Wooden Shoe Tulip Festival, a well-known spring attraction in Oregon’s Willamette Valley. As the Beachie Creek and Riverside fires raged roughly 25 miles away, the farm was in Stage 3 evacuation for 10 surreal autumn days.

It’s a scene that has played out throughout the western U.S. as roughly 40 large fires, amplified and accelerated by climate change, burned in September. The coastal states were most heavily impacted: California, in particular, has endured an unprecedented span of fire over the last two months. As of today, California’s devastating Glass Fire has damaged, if not destroyed, nearly 30 wineries in Napa and Sonoma counties.

Ash has been raining down on farm fields for weeks. Farmers of most crops—from fruit to lettuce—have been able to wash it away with minimal impact to operations, says Christopher Valadez, President of the Grower-Shipper Association of Central California. Still, since farmers don’t necessarily have the labor to clean produce, consumers have been advised to take extra precautions and wash fruits and vegetables thoroughly before eating them.

Luckily, Iverson Family Farms, a diverse, third-generation operation growing grass seed, tulips, wine grapes, and hemp, did not experience direct fire damage. Beyond worries over community losses, “I was concerned with embers that could have drifted onto the farms and ignited fields and homes,” says Giavanna Accurso, director of research and development for Iverson Family Farms and FSoil, the family’s hemp oil processing facility.

As the smoke clears, however, many farms, including Iverson Family Farms, are taking steps to make sure no invisible damage occurred in high-value crops susceptible to smoke—notably cannabis and wine grapes. Unfortunately, answers won’t be swift in either case.

In grapes, smoke damage imparts a burnt, ashy, even medicinal taste to the resulting wine. When wood burns, it releases volatile compounds, called phenols, which can bind to grape sugars, only to be released during fermentation. Cannabis may also be similarly impacted by volatile compounds, and possibly other chemicals if buildings—and not just wildlands—burned nearby.

The potential for widespread impact has left the labs that test grapes for smoke damage backlogged with requests, says California Farm Bureau Federation director of media relations, Dave Kranz. Tests that would typically take two to three days to process, are now taking several weeks, he says. A message on the website of California-based ETS Laboratories, one of the primary facilities able to test grapes, says they are unable to give customers a timeline to expect results.

One big difference this year is the fires occurred earlier in the season. During the October 2017 fires, only 10-15 percent of the crop was left on vines by the time the fires started, says Anita Oberholster, a viticulture specialist at University of California at Davis. “This year, the wildfires started when only 10 to 15 percent had been harvested; most grapes were still on the vine,” she adds.

“An estimate of the amount of smoke damage is really difficult,” says Oberholster. Glenn McGourty, a University of California viticulture advisor in Mendocino County, agrees. He says suspended particulates, which you can see in the atmosphere, don’t do much damage. It’s the volatile phenols, which are released in close proximity to the fire that can bind to the sugars in grapes to form compounds called glycosides. During fermentation, glycosides break apart, releasing the phenols that have a smoky flavor. In general, red wines, especially ones made with thin-skinned grapes like Pinot Noir, tend to be most affected. And that’s why it’s impossible to predict damage without testing.

Oberholster says that not every farm will necessarily be impacted. “Smoke exposure and risk is really complex,” she says. For example, only when smoke is really fresh is there a correlation between the density of smoke you see with the naked eye and actual exposure. And any breakdown of phenols in sunlight depends on atmospheric conditions. “We don’t know the half-life of [phenols], but there is some anecdotal evidence it could be 24 hours, maybe longer,” says Oberholster.

Oberholster advises growers to have their grapes tested if they experienced smoke at all, and especially if the wind blew fresh, dense smoke directly towards them. In the case of the current fire—the Glass Fire—raging in Napa and Sonoma, that could mean a lot of grapes. 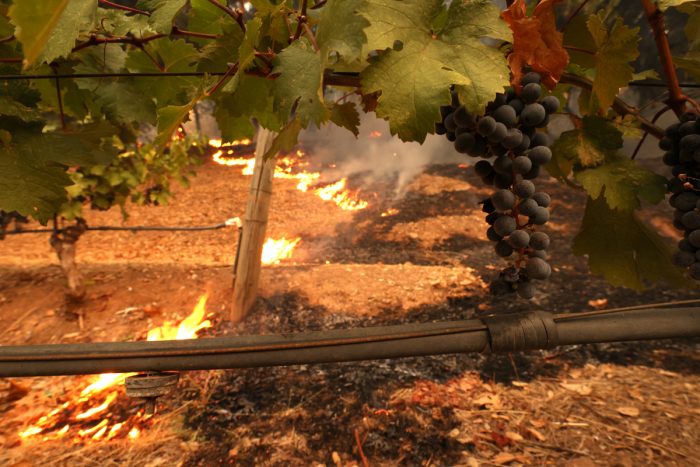 Fires from the Glass Fire burn in a vineyard in St. Helena, California, on September 27, 2020.

“We are telling people to wait until as close to harvest as they can to test,” she says, for two reasons. With so many fire events, growers should only send grapes ready to be picked to avoid overloading laboratories with samples and unnecessary, additional costs. First, labs inundated with samples will slow the results and cost the grower more. It’s around $150-200 per sample to determine which grapes are impacted. And insurance requires that growers test every block of every variety they grow.

But despite the ongoing concern in the industry, and the fact that some wineries have already decided not to make a 2020 vintage, Oberholster cautions against condemning the entire crop.

“I don’t want people to look at fire maps and think everything is impacted and all wine from 2020 is going to be bad—because that’s not true,” she says. “Air quality and smoke exposure risk is not the same thing.”

McGourty agrees. “There will be plenty of places that make good wine this year,” he says.

But the testing may need an overhaul too. Currently, labs search for between two to seven marker compounds of damage, but there is evidence from Australia, which has been dealing with smoke-tainted grapes for 15 years, that there are up to 13 marker compounds of smoke damage, according to Oberholster.

The Impact on Cannabis

Cannabis, too, may have smoke damage—but, compared to wine grapes, there is far less research yet available on the impact of phenols. The Global Hemp Innovation Center at Oregon State University has just formed an industry collaborative to assess the smoke impacts on everything from smokable cannabis flowers to essential oils, such as CBD.

Given the sticky nature of cannabis flowers, traces of toxic chemicals in ash or smoke carry additional concerns. In Oregon’s Jackson County, home to the Rogue Valley’s 6,300 registered hemp acres, the Almeda Fire burned a number of manufactured homes, raising concerns about heavy metals—for chromium to arsenic in pressure-treated wood—that could be difficult to wash off. 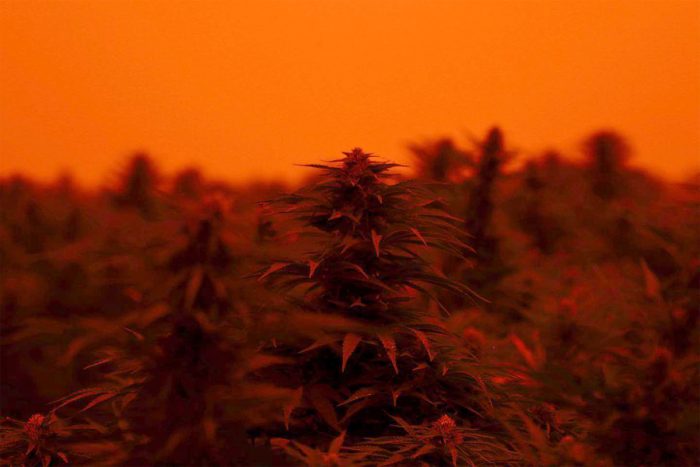 In Oregon, 17 percent of grow sites statewide faced imminent danger from wildfires in late September, which is roughly 10 percent of Oregon’s outdoor cannabis acreage, according to hemp industry analysis group Hemp Benchmarks. Growers, especially those who are relatively new to the crop, have had a lot of questions. More than 350 people attended a September 23 virtual hemp field day, seeking answers.

The most pressing questions were: what amounts of contaminants may affect quality and safety of products, and are residues, such as heavy metal contamination, left behind on the plants, says Jeff Steiner, associate director of Oregon State University’s Global Hemp Innovation Center, which hosted the online event. “We just don’t have answers yet,” he says.

Steiner is overseeing the formation of the Smoke Effects Working Group, an industry-based stewardship group that will develop methods and collect samples from around the West to analyze for quality, heavy metal content, and the same phenols that can impact wine. Accurso is part of that group. She is particularly interested in compounds including dioxins, polycyclic aromatic hydrocarbons, and heavy metals, since she says “we don’t know what burned.” Steiner and the growers she works with are doing what they can to determine if the fires had any discernable impacts. “We want to be able to back up the quality and safety of our products with scientific data,” she says.

Steiner says in addition to short-term research efforts to assess this year’s crop, the industry group will also develop long-term research and science-based management plans over the next five years to respond to anticipated challenges from wildfires in the western U.S.

“It’s a strategy similar to the one adopted by the wine and grape industry five years ago,” he says. “This is not a new issue for agriculture,” he adds. Unfortunately, it appears it will be a more prevalent one.