Heleodora Vivar Flores is one of the city’s most vocal advocates for street vendor rights and decriminalization.

This story originally appeared in Prism, and is reprinted with permission.

Heleodora Vivar Flores is one of the most visible and vocal advocates for street vendor rights and the decriminalization of street vending in New York City. Now in her late 70s, Heleodora has been en la lucha (in the fight) for over a decade. The proud matriarch migrated to the United States from the southern Mexican state of Guerrero in 1987. She’s been a loving presence in the predominantly Dominican neighborhood of Washington Heights in Manhattan since the late ‘90s, where she began selling Mexican tamales and atol after years of working in restaurants.

As a leading member of The Street Vendor Project, Flores has been part of multiple advocacy campaigns and countless protests. She’s journeyed through every corner of New York City, connecting with fellow street vendors, informing them of their rights, the city’s restrictions, and urging them to join the fight. Because the licensing application doesn’t require a Social Security number, most street vendors are undocumented. There are as many as 20,000 street vendors across the city, according to The Street Vendor Project, including mobile food vendors and merchandise vendors. Many of them have faced ongoing harassment from the police.

In November 2019, the video of Elsa, a churros vendor, being handcuffed and dragged outside the subway station by police, went viral. “Even during the pandemic, there were cops who were giving tickets to undocumented vendors in Corona Plaza in Queens. So, not even at a time when people are at their most desperate, at their most vulnerable, when they’re trying to provide for their families, has there been an appreciation and a recognition and an understanding that vendors, they’re not committing crimes,” says Carina Kaufman-Gutierrez, deputy director at The Street Vendor Project.

For some context, in the case of mobile food vendors, they must obtain both a food vendor license and a permit from the New York City Department of Health for the cart or vehicle where they’re transporting the food. While the licenses don’t have a cap and are more easily obtained after people take a food handling course, since the 1980s, the city has only allowed for some 5,100 street vendors in the entire city to get permits, shielding just a few from thousands of dollars in fines and possibly arrest.

After past failed attempts at increasing the number of street vending permits in the city, The Street Vendor Project is once again pushing for a bill in the New York City Council, Intro 1116. The bill, which was introduced in 2018, would create 4,000 new mobile food vendor permits over the course of the next 10 years. It would also create a dedicated vending enforcement and regulation agency to remove the NYPD from having involvement in regulation of street vending.

In a conversation with Prism in early September, Flores spoke to us about her journey as an immigrant from Guerrero, Mexico, and a matriarch trying to support her family, her advocacy, and her own experience with police harassment as she tried to make a living. Here she is, in her own words, which have been condensed and edited: 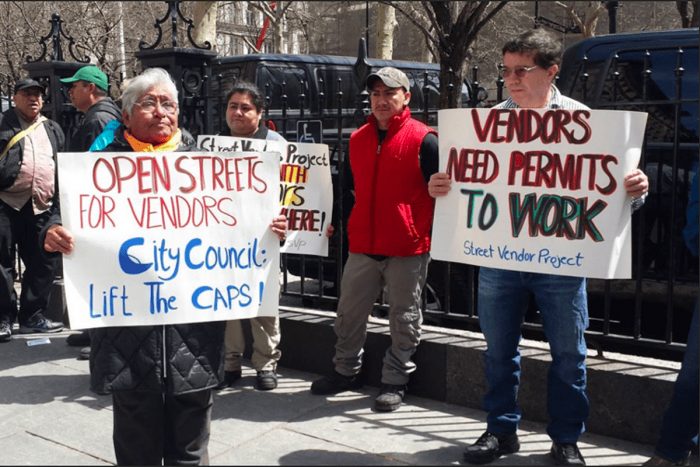 When I came [to the United States], I worked in clothing factories, I worked ironing clothes, I worked in restaurants. Then one of my sons opened a restaurant, but it didn’t progress due to some family issues. We came here with the purpose of surviving, to support the family. Little by little, I brought my seven children and four grandchildren. Sadly, one of my granddaughters passed away recently. She was battling with cancer for seven years. She fought, but we couldn’t do more and she’s left us. She’s my little angel now. She would tell me, “Grandma, when you’re not here anymore, I’m going to keep up the fight.” But she left me first.

[When] I was working in restaurants, I began to have a problem with one of my arms. I think it was arthritis. Then I started having issues with one of my legs. This prevented me from continuing to work. I wondered what I was going to do. And I thought, well, I’m going to sell food in the street. I enjoyed this type of work and it’s a common trade in my country. When you come here, you bring your customs with you. I started cooking food. But I didn’t know how difficult the situation is.

In 2004, there was an organization [for street vendors] called Esperanza del Barrio on 117th Street and 2nd Avenue. There were like 600 of us but none of us had [vending] licenses and if you were undocumented you didn’t get a [vending] license. Together, we fought the city to get street vendor licenses, which is the badge that proves we’re apt to handle food outdoors. We took a course that taught us [food safety], distancing rules [and other regulations]. After the course, we got our licenses. And we thought, “With this, we’ll be able to work freely.” That wasn’t the case.

We needed to buy a food cart and a permit, a sticker to put on your cart that says you’re a street vendor. And so we started that fight. And to this day, we’re stuck there. Esperanza del Barrio dissolved. Some of us joined The Street Vendor Project. Others didn’t want to keep doing this anymore. And others created another organization, VAMOS Unidos in the Bronx. We’re all in the same struggle.

I didn’t buy a food cart and I kept selling my food like I did before. I live in Washington Heights. I would make tamales and atol. I bring that tradition from my country. One day, I came face to face with the police. They took my atol and the container where I had my tamales. I didn’t go outside for the next two days. I wondered, “What am I going to do now?” I bought new containers and started selling food again. And [if we saw the police], we would run away. At the time, there wasn’t a big Mexican community [in Washington Heights], but now there is. [Street vendors,] we all come from different cultures. Dominicans sell their pastelitos and habichuelas con dulce. Others sell tostadas. And we’d all run together [if we saw the police]. And that is how we survived for some time.

One summer, many of us decided to go sell at Van Cortlandt Park, the last stop in the train. It’s a big park, where a lot of people go to play. We sold a lot. In two hours or less we’d run out of food. But the park’s police started watching us and one day they came for us. I didn’t have any food left. But other compañeras still had food, some had just arrived at the park. And the police took everything from them. My daughter just happened to have been playing soccer at the park with her team, so I told the police that I had brought food for the team. They warned me that if they saw me there again, they would fine me and that they could arrest me. I told one of my daughters that I wouldn’t sell food anymore. But necessity forces us.

I decided to try to sell other merchandise like necklaces, earrings, hats, and scarfs. But it was the same situation. I set up my table and the police came demanding to see my permit. And I said, “I don’t have one.” The city isn’t giving us permits.

In 2014, we launched another campaign with The Street Vendor Project to keep fighting for these permits. There’s a lot of people who have been taking the risk of selling without a permit. We went to every corner of the city: Brooklyn, the Bronx, Manhattan, Queens. Gathering signatures and also informing vendors about The Street Vendor Project and the city’s restrictions because many of them still didn’t know the rules. We have to deal with [multiple] things: the city’s rules, the police, and the [New York City Health Department]. We were able to introduce [a bill] to the New York City Council. There were rumors that the proposition would pass. [But the bill was killed in December 2017] and once again we lost hope. But I’ve told the compañeros, “Don’t lose faith, compañeros. Let’s keep going.”

There are a lot of people who say street vendors are dirty and a competition [to restaurants]. But I say we will never be competition. To the contrary, we help the poor community, because sometimes we don’t [have money] to go to a restaurant and in the street we can eat for $5 or less.

[In 2018,] we started working on another campaign. But then the coronavirus disrupted our plans. But we have reactivated.

Thank God I didn’t get sick. But one of my sons got sick. I live with my two sons. It was when this thing started. He had a ferocious cough. He wasn’t sleeping. I would make him warm soup, give him Vicks massages, massages with eucalyptus. At the time we didn’t know if it was the virus. Two weeks went by. He started feeling better and got the test. He tested positive. One of my daughters, too, because her husband got sick. To this day, her lungs hurt.

I haven’t been able to work. I just go out to buy food and to take walks.

Some things have changed [for street vendors]. Before, [the police] would throw away our food. They would put Clorox in our beverages. If you had tea, coffee, or atol, they would put Clorox in the container so you couldn’t sell it anymore. This never happened to me, but they would take the money other compañeros earned. Today, if they take our merchandise unjustly, we have a lawyer who represents us. We haven’t won our permits fight. But we have at least earned some respect. Human beings, we have the right to find ways to survive.

Prism is a BIPOC-led nonprofit news outlet that centers the people, places and issues currently underreported by national media.