A new white paper from the Rodale Institute and the Carbon Underground says that regenerative practices, if adopted around the world, could sequester all annual carbon dioxide emissions. Critics warn the scientific data doesn’t support these claims, and may oversell the benefits. 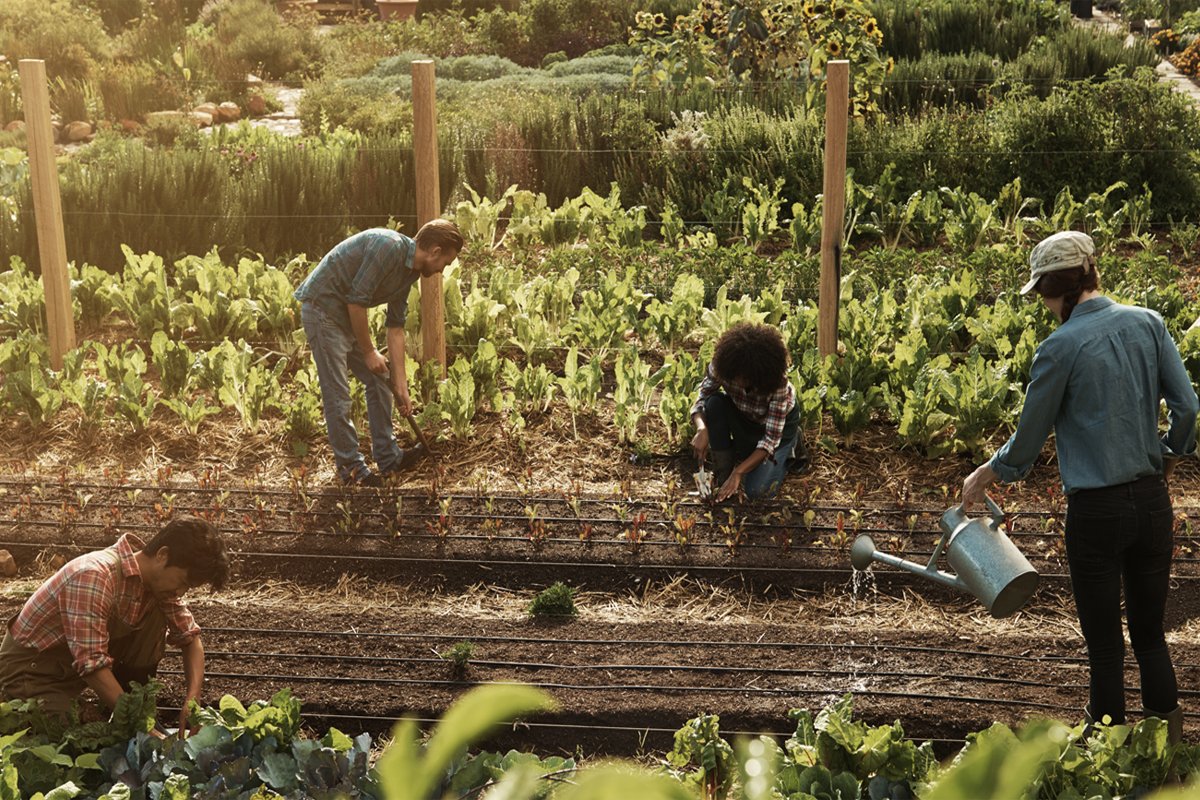 Regenerative agriculture is having a moment. A new Netflix documentary highlighting its potential to rebuild soil, Kiss the Ground, is drawing attention to the practice’s climate mitigation potential. Companies including General Mills, Target, McDonald’s, and Cargill are investing in regenerative agriculture. Presidential candidate Joe Biden has mentioned paying farmers to sequester carbon in his campaign language, and several U.S. senators have introduced a bill to help farmers generate carbon credits after adopting regenerative practices. And new public and private carbon markets (and one new ecosystem service market) are being formed to issue those credits.

As wildfires, extreme temperatures, droughts, floods, and other climate-fueled disasters plague much of the country, it’s easy to see why a solution that promises to draw carbon out of the atmosphere while simply farming differently has growing appeal.

And there’s good reason for all the optimism. Many experts agree that regenerative agriculture practices—including, for example, the use of cover crops, reduced or no tillage, and diversified crop rotations—hold great potential to rebuild dwindling organic matter, improve soil health, stave nutrient runoff that causes water pollution, and sustain biodiversity.

A new white paper from the Rodale Institute and the Carbon Underground—called Regenerative Agriculture and the Soil Carbon Solution—lays out these benefits in detail and aims to define the suite of practices that will rehabilitate ecosystems.

Robert Rodale, son of the Rodale Institute’s founder, is said to have coined the term “regenerative agriculture” in the 1970s, and the farm and research facility has long been a pioneer in organic practices and soil health. Now, the Institute is behind the new Regenerative Organic certification and label, which it launched with Dr. Bronner’s and Patagonia in 2018. Meanwhile, The Carbon Underground has assembled the Soil Carbon Index, which they hope will be an “outcome-based, verifiable standard designed to improve soil health and build soil carbon by encouraging the shift to regenerative agricultural practices.”

“With this white paper, Rodale Institute shows us how regenerative agriculture has the potential to repair that damage and actually reverse some of the threatening impacts of our climate crisis,” Tom Newmark, Chairman of The Carbon Underground, said in the press release for the paper.

The paper promises to bring the latest science to bear, but it makes an eye-popping, unsubstantiated claim. It says that regenerative practices, if adopted around the world, could sequester all annual carbon dioxide emissions. The document states: “Data from farming and grazing studies show the power of exemplary regenerative systems that, if achieved globally, would drawdown more than 100 percent of current annual CO2 emissions.”

Rodale soil scientist Yichao Rui confirms that the white paper authors based the extrapolations of carbon sequestration rates found in one study of a corn and wheat organic system based in the Mid-Atlantic and one study of a regenerative grazing system in the Midwest to the rest of the world—regardless of soil type, temperature, or precipitation regime. The report features a few other studies as evidence—such as agroforestry projects in Costa Rica, cover crops in the tropics, or organic amendments in olive orchards in the Mediterranean that have also recorded roughly twice the amount of carbon sequestered that Rodale used in the extrapolation.

“The 100 percent offset of greenhouse gas emissions is based on a thought experiment,” says Rui. “This is our perspective. I understand there will be questions. Not everyone will agree.”

Every soil scientist interviewed for this piece agreed that the benefits of regenerative agriculture are wide-ranging and many, including for climate change mitigation. But they also agreed the 100 percent claim was baseless.

“Regenerative agriculture is a powerful drawdown, both to reduce emissions and add new carbon sinks . . . but no one thing can possibly fix climate change.”

Jon Foley, executive director of Project Drawdown, agrees, and says assertions to this effect make it more difficult to set realistic expectations for climate mitigation strategies. “Regenerative agriculture is a powerful drawdown, both to reduce emissions and add new carbon sinks,” he says. But “preposterous claims that are easily debunked only undermine the message that regenerative agriculture is one of the few areas that can [potentially] solve around 10 percent of climate change.” If so, it would be on par with solar or wind energy, says Foley. “No one thing can possibly fix climate change.”

White papers, unlike scientific publications, are not peer-reviewed examinations of new data. “This white paper is not based on a study in which we transform or shift every single [farm] field around the world,” says Rui, which he notes is impossible.

But just how rooted their perspective is in existing facts is in question. And the experts we spoke to had several criticisms of the white paper. First, experts claim that the Institute ignores more careful analyses, like Lal’s and others, which suggest that regenerative agriculture can offset at most 10-15 percent of emissions. “When I tell people that we can offset up to 15 percent [using soil as a carbon sink], they tell me I’m overly optimistic,” says Lal.

And, instead of rigorously doing an analysis with real-world data, it appears that the white paper authors simply picked a couple of hand-selected sites and multiplied that by the entire land area on Earth, says Foley.

To that end, the carbon sequestration potential of different soils—and the fact that soil doesn’t store carbon permanently, but can hit a limit and even be reversed—are not taken into account. According to a recent peer-reviewed study of soil carbon storage in global ecosystems published in the Proceedings of the National Academy of Sciences (PNAS), for example, the fraction of carbon that is transferred belowground—where it can be stored longer-term—decreases with precipitation and varies significantly between croplands, savannas, and forest.

While degraded soils can accumulate carbon quickly, says Osvaldo Sala, a coauthor of the PNAS study and a soil scientist at Arizona State University, healthy ecosystems are full of invertebrates and microorganisms that recycle nutrients and consume organic matter, which emits carbon dioxide. “There’s a natural limit on the amount of carbon that a healthy ecosystem can hold,” says Sala.

Critics also say the Rodale white paper is not based on research that conducts a full life cycle analysis of net carbon accrued. Where does the carbon to build the soil organic matter come from? If from food waste or manure, the transportation to apply it should be subtracted from the amount of net carbon sequestered, says William Schlesinger, retired president of the Cary Institute of Ecosystem Studies, a not-for-profit research organization in Millbrook, New York.

And, Schlesinger adds, soil doesn’t just store carbon. Other nutrients, including nitrogen and phosphorous are found in humus, the stable form of stored organic matter. “If we wanted to sequester all of fossil fuel emissions in the atmosphere in soil organic matter, it would take four times the nitrogen fertilizer already used today,” he calculates. And those applications would certainly come with global warming nitrous oxide emissions and nutrient runoff.

“Regenerative agriculture is like apple pie: It’s a warm and friendly concept that no one can be against.”

“These are sound questions,” agrees Rui. He hopes future research will address where the nutrients could come from and how long carbon sequestration could be sustained.

“Regenerative agriculture is like apple pie,” says Schlesinger. “It’s a warm and friendly concept that no one can be against, but saying it will balance [all] carbon dioxide emissions is out of the ballpark and poorly evaluated,“ he adds.

The consequences of overselling regenerative agriculture’s potential, however, are sobering. “My concern is that people may say if agriculture can do all that, why stop using fossil fuels?” says Lal.

Schlesinger agrees. “Promising what you can’t deliver will keep the nation, if not the world, on a fossil fuel diet,” he says. “To the extent that this puts off real effective action of fossil fuel emissions is a real disservice to [larger efforts] to mitigate climate change.”