The food activist and co-founder of the I-Collective sees the work of his elders as the foundation for promoting economic, racial, and environmental justice. 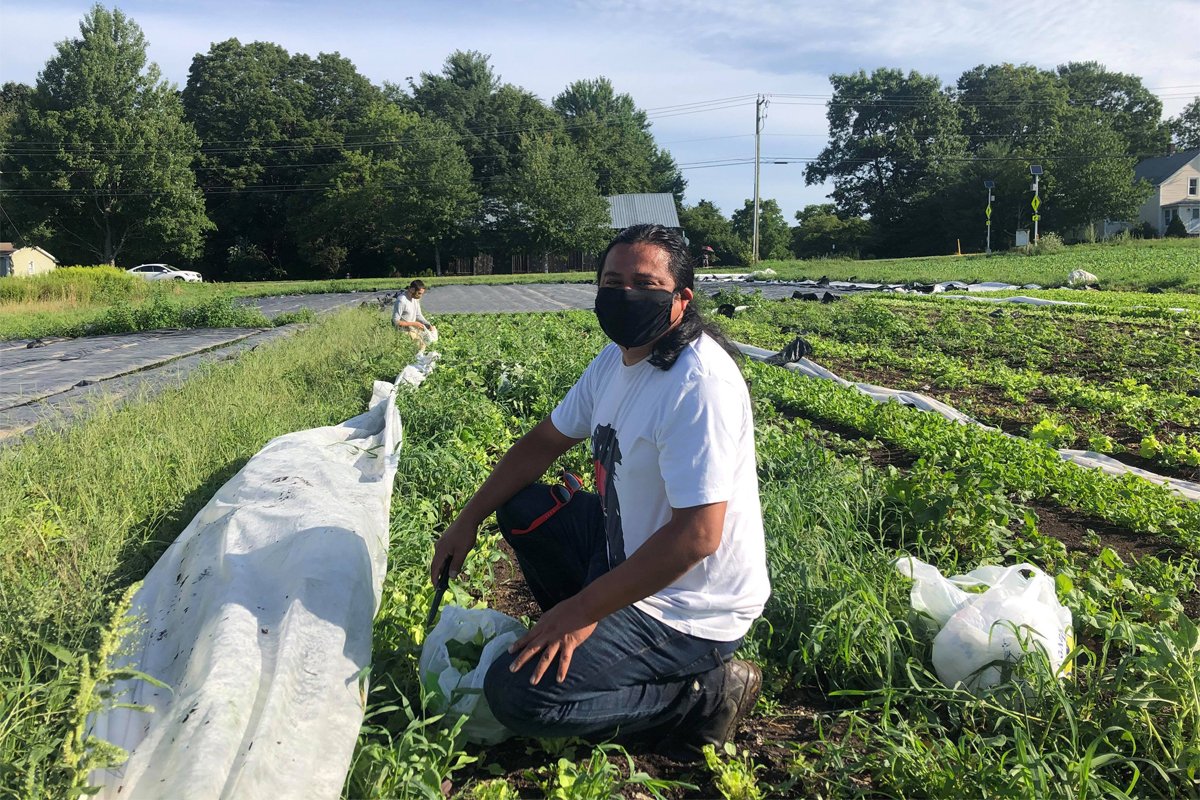 Neftalí Durán wants more people to rethink the inequities in our food system. The food rights activist argues that we need food sovereignty for people of color, food justice in general for everyone, and systems change at the government scale.

“It’s 2020,” he said. “The fact that many Native and Indigenous people, either in the U.S. or in Mexico, don’t have running water or electricity is a stark reminder of the inequality.”

Hunger, driven by a lack of access to nutritious foods, has been a serious problem in Indigenous communities since long before the pandemic began. One study based on data collected between 2000 and 2010 found that Native Americans and Native Alaskans had an average food insecurity rate of 25 percent, compared to 10 percent among white Americans. Other studies have identified much larger numbers; one that looked at communities in the Klamath River Basin near the Oregon-California border found that 92 percent of households had experienced food insecurity.

COVID has made things worse, but it’s not yet clear how those numbers have grown. In May, five months into the pandemic, Feeding America estimated as many as one of every three adults and one of every two children will be food insecure during the crisis.

Durán moved to the U.S. at 18 in search of economic opportunity and started his two-decade food career in Los Angeles as a line cook. He eventually became a small-business owner and baker at El Jardín, a wood-fired oven bakery that he ran for more than 10 years in Massachusetts. 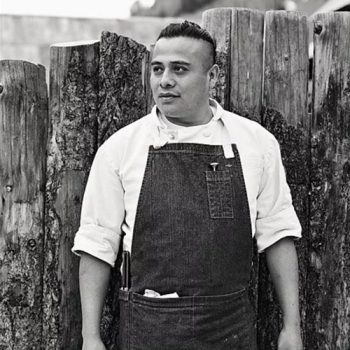 Now, Durán lives in Holyoke, Massachusetts, where he focuses his time on education and activism. He is the cofounder of the I-Collective, a national group of Indigenous food activists, chefs, and educators that since 2017 has been organizing events to create awareness of Indigenous food movements.

He also teaches classes (now online) to Supplemental Nutrition Assistance Program (SNAP) recipients through the Share Our Strength’s Cooking Matters program, where he works with communities on food skills, budget planning, and nutrition education. In addition, he recently founded the Holyoke Food and Equity Collective, an anti-racist organization working to build food sovereignty and access to healthy food in his town through techniques ranging from policy change to gleaning.

Civil Eats spoke with Durán on how the pandemic is impacting SNAP recipients and Indigenous populations—and how we might start fixing the food system.

What does the pandemic mean for communities that rely on SNAP?

We know that the amount of SNAP recipients has increased dramatically. I believe we went from like 40-ish million [food insecure] people to 50 million [during the pandemic]. And we also have to remember the numbers we know are only the people who qualify or were able to [receive the] benefits. Not everyone that [needed them] applied, [and] you can apply and not receive anything.

Talk about your work with I-Collective. How are the Indigenous chef and activist communities responding to the COVID crisis?

I think everyone is doing the best they can depending on their circumstances—where they are, whether they have access to a kitchen.

Brian Yazzie in Minneapolis has been feeding the elders since the beginning, and I believe he is going to continue to do that. And then we have people like Karlos Baca in the Southwest who has been doing mutual aid work. We [also] have people in other parts who have been part of the activism and Black Lives Matter movement.

I have been part of mutual aid work, besides my regular work, just because it’s needed, whether it’s raising money for excluded workers in our communities, or right now, doing gleaning and food recovery for the city where I live.

What is mutual aid, and how has it become a response to food insecurity?

Now, the term during COVID has become more of a nonprofit terminology. But, in essence, it is just helping one another, oftentimes without expecting anything back. Right? If you’re feeding someone, you’re not expecting they’re gonna pay you later. Mutual aid, specifically for communities that are excluded from benefits, is super important.

In most states, if you have a felony, you don’t qualify for benefits. You don’t qualify for SNAP or housing. If you’re undocumented, obviously, you’re not going to qualify for any state support. And there are other people, people who even if documented are scared to apply for SNAP [because] they don’t want that to prevent them from the process of applying for citizenship.

People who work in the cash economy, who don’t do taxes, who cannot provide a pay stub, fall through the cracks. So mutual aid during COVID is making sure that everyone has a little bit of help.

How do you see the pandemic changing the focus of the I-Collective in the future?

Essentially, we see that mutual aid and community organizing have to be stronger within the collective. We have to do a lot more of that. And it has to become an essential part of our community building. Along with that, [we need to incorporate] some [more] webinars and conferences. There are people in the collective who are going to step up and do that, whether it’s leading webinars or organizing with other people.

For many decades, hundreds of years, people have been building food movements and organizing through being together—through food, hanging out, having [a] beverage together. That has been an essential part of the movements, and that’s being taken away.

“People who work in the cash economy, who don’t do taxes, who cannot provide a pay stub, fall through the cracks. So mutual aid during COVID is making sure that everyone has a little bit of help.”

For the last few years, the I-Collective has been building a movement through in-person dinners. We started in November 2017 with partners and restaurants in New York City, doing an Anti-Thanksgiving dinner, and we’ve been doing those kinds of dinners and participating in conferences through food and with food at the table. So, it’s really unknown right now how this is going to work.

Indigenous community elders are at a greater risk from COVID-19. How does this threaten Indigenous culture at large?

When I think about elders, I think of elders in the U.S. and in Oaxaca, right? I think of my mom, but I also think of elders who have mentored me in the U.S. And it’s a very precarious situation in the sense that the last two things that we have left [to prevent] our cultures [from dying] is our food and our language. And if you don’t have your elders to tell you stories about food, then you’re really losing an intricate part of your cultural heritage.

It can be really, really simple things. It can be like me walking with my uncle last December, and in passing him telling me “Oh yeah, we used to eat that kind of plant for this” and “that makes tea and you harvest it this time of the year.” [Many] think that this knowledge belongs to academia. For us, it’s for storytelling, generation by generation.

Native Americans are twice as likely to have diabetes than white Americans, which puts them at greater risk for the virus. How does this tie into historical food injustice?

(COVID) is one of the most stark reminders of food injustice, but also it’s something tangible, because we have data to back it up. That’s what makes this situation different. We can see that people in communities of color are dying at a higher rate, and we know it’s because of poor health outcomes in general. A good diet is an essential part of being healthy.

“If you don’t have your elders to tell you stories about food, then you’re really losing an intricate part of your cultural heritage.”

What is an example of a positive outcome or response that you’ve seen to the crisis regarding food insecurity and activism?

I think the fact that farmers are a lot more open to let[ting] us come and glean and do food recovery on their farms is a simple understanding that they are part of the community. But there’s a lot of issues with local food movements, because they also perpetuate inequalities and racism.

For example, it is well known that the community supported agriculture (CSA) model specifically caters to wealthier people, who happen also to be white. We should stop replicating that. We should move to a model where that nice CSA also agrees to have a partnership with communities of color that lack that kind of access.

If there is something positive that we can take out of this whole pandemic, it is that we have to work on local food movements. To make sure that they are an intrinsic, essential part of what the food system looks like going forward.

Massachusetts farms produce only about 20 percent of what we consume. We can do better. Puerto Rico is a beautiful island with fertile soil. Why are they producing only 10 percent [of what they eat]? There’s a treaty [The Jones Act] that says everything Puerto Rico imports has to come through Miami or through a U.S. port. That’s insane. That essentially goes against food security.

What’s next for you?

We are building a new organization in the city of Holyoke, Massachusetts—The Holyoke Food and Equity Collective. It is going to be an anti-racist organization that focuses on food, the food system, and food sovereignty for our community. The collective hopes to promote economic, racial, and environmental justice in collaboration with the local city government.

Melissa Montalvo is a freelance writer who primarily focuses on the food and agriculture industry, cantinas, and all things Mexico. Read more >