In Ghana, when a person passes a farmer in the field, they call out, “Ayekoo,” which loosely means “I see you” or “I acknowledge you farming the land.” In response, the farmer says, “Aye,” to thank the passerby for the acknowledgement.

When naming their new farm in rural Washington, Deepa Iyer, the daughter of Indian immigrants, and her partner Victor Anagli, who grew up in the Volta region of Ghana, wanted to honor this call and response tradition, so they christened their 21-acre property Ayeko. Located in the town of Enumclaw, Washington—40 miles southeast of Seattle—Ayeko is covered with fruit trees and raspberry and blueberry bushes and bisected by a creek.

“It’s magical,” says Iyer, who grew up in New Jersey.

The couple—who between them have two children and one full-time, off-farm job—are currently growing organic vegetables on one acre and have started a U-Pick for the berries. But in the future, they hope to invite other farmers and families who are Black, Indigenous, and People of Color (BIPOC) to join them.

“We want to share this land with other people,” Iyer says. “Our vision is village-style, everyone growing food—a life where kids can run out the door and don’t have to make an appointment to have a play date.”

As of today, however, Iyer and her family and community—along with others across Washington state and along the entire West Coast—are largely sequestered indoors as a result of the wildfires that are burning around the state and region. “We are concerned because there are fires very close to here . . . we are surrounded by dry grass and anything could happen,” Iyer told Civil Eats in an email. “Crops are looking affected by smoke; nothing has been lost to fire, but it feels like the season is over in many ways.” 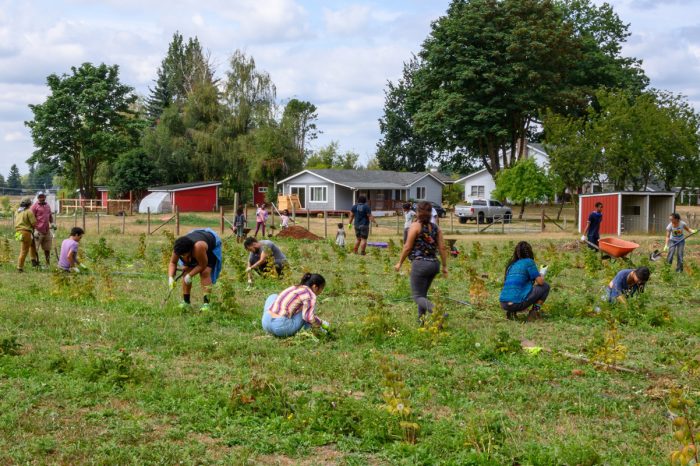 A group of people work in the fields at Ayeko Farm. (Photo by Sharon Chang, courtesy of Ayeko Farm)

Before the fires, Iyer found out she’d been chosen as one of 12 recipients of the Castanea Fellowship, a two-year program that helps support a racially just food system. The fellowship comes with a $40,000 grant and a connection to a network of experienced farmers who get together for six “learning immersion journeys.”

Farzana Serang, executive director at the Castanea Fellowship, says Iyer is a valuable part of the cohort. “What’s incredible about Deepa,” Serang says, “is she’s been farming for 20 years, making culturally relevant food more accessible, and still considers herself new to the work.”

Discovering a Love of Farming

Iyer fell in love with farming the year after college, when she took a six-month soul-searching trip to India. While there, she visited botanical sanctuaries and worked on intentional farming projects. When she returned home, she found an internship with a watershed organization, Stony Brook-Millstone (now the Watershed Institute), which also had an organic farm.

It was there that she discovered environmental education. She would take school children to the pond and collect water samples that were full of tadpoles and dragonfly nymphs. “I didn’t even know that this type of work existed,” Iyer says. “You can be out in nature with kids as they discover their love of nature?!”

She also got hooked on organic farming. “I would stand on the truck and the guys would come in with the harvest and throw pumpkins at me,” says Iyer, who describes herself as “a tomboy to the death.” She caught all the pumpkins.

Now, at 42, Iyer still relishes manual labor. “Bending over and pulling weeds all day? I love that!” she says.

Iyer also spent a year as a teacher-in-residence at Slide Ranch, an educational farm on the coast north of San Francisco that connects children to nature. That experience put Iyer more firmly on the path of food systems education and led her to launch an urban farm collective in Oakland called (SOL), which she ran for six years before heading to Michigan State University to study the intersection of social justice and the ecological impact of our food and farming systems.

Anagli, who she met in Michigan, comes from a long line of farmers in Ghana. One of the first questions he asked her was, “How do you want to change the world?”

“I’d never been asked that before,” Iyer says.

Eventually, the couple moved to Oakland with their young son and began the hunt for a plot of fertile land.

They started searching for land with some friends, but everything they found within a two-hour drive from Oakland was out of their price range. Iyer, who has family in Seattle, shifted the search to Washington and in early 2018, she found the property in Enumclaw. 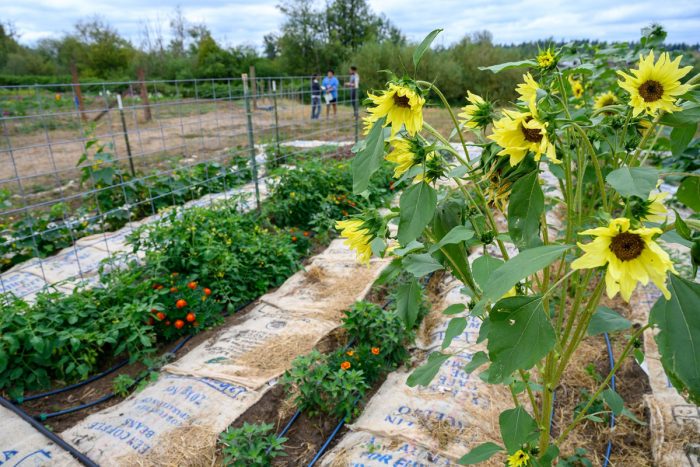 Sunflowers in the fields at Ayeko Farm. (Photo by Sharon Chang, courtesy of Ayeko Farm)

Iyer also landed a full-time job at the International Rescue Committee in Tukwila, where she heads up a community agriculture and food security program with refugees from Burma, Bhutan, and the Democratic Republic of Congo. Through this, she runs four community gardens in South King County, as well as two market garden production sites, and she co-runs the Tukwila Village Farmers Market.

This kind of “cultural rescue” is very important to Iyer, who earned her master’s degree studying the food and farming practices of elder women in the Himalayas. “If we lose a vegetable type or variety, then we lose all the things that go with it—words, celebrations, colors, stories—so much richness,” Iyer says.

Not long ago, Iyer invited a group of her mom’s friends to Ayeko and one Indian-American woman in her 70s saw the long beans in the fields and grew animated. “All these conversations started happening about these recipes,” says Iyer. “‘Oh, my grandma used to make those!’ she said. Those are my dream-come-true moments.”


Because theirs is such a bare-bones operation—the crew is just Iyer and Anagli, and Iyer maintains a full-time off-farm job—they don’t yet have a booth at the farmers’ market or even a community supported agriculture (CSA) program.

So for now, their method of selling produce is very casual: they send e-mails to their community inviting them to come to the farm and get it or to access it at one of a few drop-off points in and around Seattle. They also started a U-Pick earlier this summer for their 400 raspberry bushes and hope to add blueberries soon. They have a number of fruit and nut trees as well, but those aren’t producing fruit yet.


Navigating Racism with a Dream of Bringing People Together

The Castanea Fellowship has been a boon, she says—both financially and emotionally. The grant will help with basic support operations like fixing the well and purchasing supplies and equipment, like a tractor. Iyer also hopes it will help launch some of their more ambitious projects, like creating an outdoor school for BIPOC kids or a co-op venture with other farmers.

Additionally, the Fellowship’s learning immersion journeys, which, for the foreseeable future, are all being conducted on Zoom, have been incredible, says Iyer. “It’s been super inspiring,” she says. “These are people who have been through so much and doing so much amazing work.”


The 2020 Castanea fellows, who include farmers, chefs, community organizers, and more, have been a source of inspiration for Iyer. Some, for instance “have been able to take [challenging life] experiences and build themselves into strong, positive people with a deep critique of our system and strong analysis of systemic racism and how it manifests in the food system.” 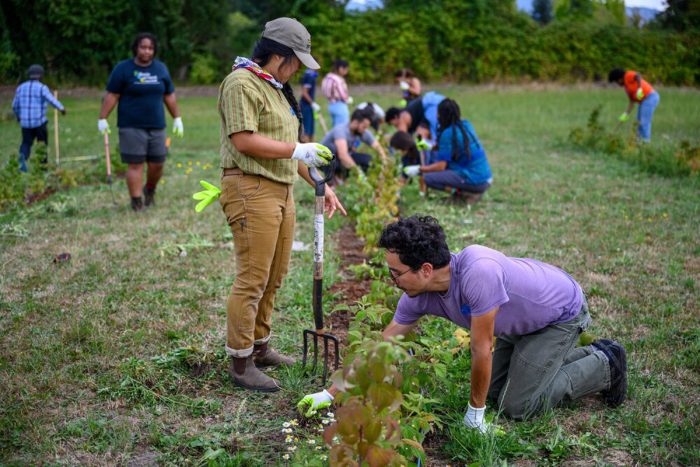 And although the work of running a farm in rural Washington has been deeply satisfying, living in a rural area as people of color has its challenges. “There are very, very few Black folks out here,” Iyer says. When they moved to Enumclaw, she jokes, Anagli and their kids doubled the town’s Black population. “All Lives Matter” signage abounds.

Two months after moving to the farm, Anagli was walking home from the bus stop when a white woman harassed him and threatened to call 911 because she didn’t think he lived there. The family also had their house robbed on the same day. “We went into a deep state of fear, and I just started feeling guilt, regret, and doubt,” Iyer says.

And yet, she holds out hope for reconciliation and healing within their community. “I keep thinking we can build community anywhere. If somebody is racist, it doesn’t mean they’re a bad person. We’re in a society that’s committed to systemic racism—it’s everywhere.”

Iyer is hopeful that the land and the food it brings forth can draw folks together. Before pandemic-times, the couple hosted the first of what they’d hoped would become an annual cooking and capoeira event called Grounded in Freedom. Though they cancelled the event this summer, they hope it’s safe to host it again next summer. In the meantime, Iyer hopes to connect with the Muckleshoot Tribe, which has a reservation nearby. “There’s a lot of opportunity to build community,” she says.

Lately, Iyer’s vision of subdividing the property and inviting other families to live there in a cooperative farming village is also much on her mind. She imagines there would be a shared meal once a week. Except for the indigenous folks, Iyer says, “The reality is that everyone’s grandma or great grandma is from somewhere else—we can all share those stories of our grandmother’s recipes.”