Farmers from across the Americas are working together to envision a new food system based on food sovereignty and political justice.

Maryland farmer Blain Snipstal wanted to expand awareness about agroecology in the United States after years spent working with advocacy groups for farmworker rights, rural issues, and peasant movements. So, in 2015, he helped organize the nation’s first international agroecology encounter—a gathering of farmers from across the Americas who laid the groundwork for a movement known as the People’s Agroecology Process.

“Agroecology—as much as it’s about creating the structures to support the production of clean, healthy food that’s produced in harmony with the planet and supporting the worker who actually grows food—it’s also very much a political and ideological process to form the new person,” explained Snipstal, a member of the Black Dirt Farm Collective in Washington, D.C.

Inspired by the worldwide grassroots peasant movement La Vía Campesina, which supports the use of agroecology to achieve food sovereignty, proponents of the People’s Agroecology Process argue that revolutionizing food production can also rid society of the ills that a capitalist, “plantation-based” economy perpetuates.

While academics, scientists, and international bodies had long pointed to agroecology as a solution to many of the problems within modern agriculture, the movement’s goal is based on the belief that the alternative approach to farming can also be a tool for grassroots mobilization. More than just another form of sustainable agriculture, proponents say agroecology can combat corporate control of the food system, recognize how racism, colonialism, and oppression intersected to create this system, and support historically oppressed groups in their fight to restructure society.

According to Saulo Araujo, director of the global movements program for WhyHunger, which provides technical assistance to the People’s Agroecology Process, “Valuing the work of women, Native Americans, African Americans, migrant workers, Latinos—agroecology is the best way to achieve those things.”

The 2015 gathering in Fellsmere, Florida, kicked off the effort to bring this methodology to scale in Canada, the U.S., and Puerto Rico. The Farmworker Association of Florida, which hosted the event, had already used an educational framework to familiarize its membership with the People’s Agroecology Process after taking part in learning exchanges in Guatemala, Cuba, and Brazil. That experience prompted the association and its partner groups to adapt this process for Black, Latinx, and Native American communities. 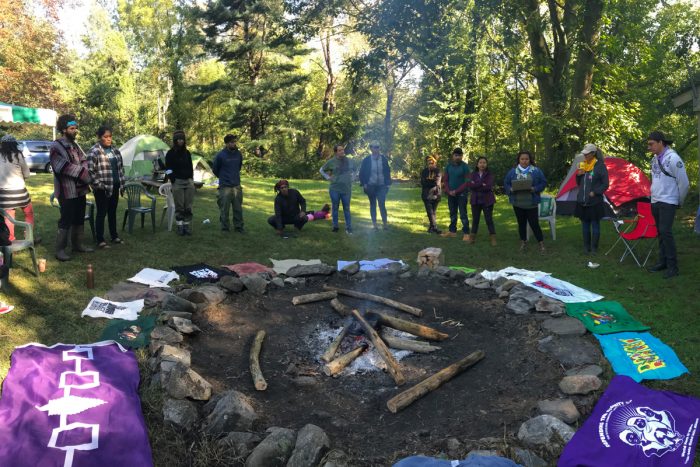 After the first encounter, Snipstal took part in online and phone-based workshops that allowed him and the collective of activists championing the People’s Agroecology Process to delve into various aspects of agroecology—from training to theory to policy. “It was an internal training process [to] identify what are the ways in which we can build an analysis around agroecology that’s grounded in our experience in North America,” he said.

Since then, the collective has held seven gatherings for hundreds of farmers, farmworkers, urban growers, and “fisherfolk.” And, this summer, the group published a 24-page guide—“The People’s Agroecology Process: Unlocking Our Power Through Agroecology”—to reflect on their endeavors and share them with the public.

“Our priority is to educate more folks about the struggle for agroecology, for food sovereignty, for land reform, for reparations,” Snipstal said. “So that more people can become aware of these issues, become more sympathetic, and then see themselves as part of the struggle.”

Outside the U.S., the struggle for a people-focused agroecology may look different, even as the goal of a noncorporate food system that centers Indigenous, traditional, and local expertise remains the same.

Jesús Vázquez Negrón, general coordinator of Organización Boricuá de Agricultura Ecológica de Puerto Rico, has been involved in the agroecology movement for 13 years. His group has participated in the People’s Agroecology Process since it began. An organizer who advocates for causes such as food sovereignty, environmental justice, and climate justice, he said that a yearning to reconnect with his agrarian ancestors and to promote sustainability fostered his interest in agroecology.

He said that the States’ influence has led to a devaluing of rural life in Puerto Rico in recent generations, which resulted in migration to cities, decreased agricultural production, and more food imported than exported. Extreme climate events, the expanded presence of agribusiness and biotech companies on the island, and the pandemic have made some Puerto Ricans ponder the kind of food system they want to have—and agroecology offers an answer.

The emphasis on community makes agroecology stand out from other forms of sustainable agriculture. People can produce sustainably grown food by themselves, Vázquez Negrón said, but if they are disconnected from their community, then it’s not agroecology, since working from shared spaces and for a common purpose that transforms people’s lives are key components of the movement.

“Agroecology provides a space to learn, honor, and share our ancestors’ practices and organize collective power through community and mutual support work.”

Upending a food system that relies on exploiting all forms of life—including people, animals, and biodiversity, for the benefit of a handful of multinational corporations—is another message Organización Boricuá has spread via the People’s Agroecology Process.

“We’ve been working together with a group of grassroots organizations from the U.S., Canada and Latin America, sharing and practicing methodologies that we use in our own territories,” Vázquez Negrón said.

Agroecology practices look different depending on one’s location and culture. They are guided by principles that respect and promote local biodiversity to ensure the health and sustainability of the soil, water, and energy. In the Caribbean, Vázquez Negrón said, that means growing cassava, yam, okra, plantain, taro, mango, avocado, breadfruit, and other vegetables that originate in Indigenous, African, and peasant communities.

“Agroecological farms in some way are imitating the balance and natural interactions that happen in a forest,” Vázquez Negrón explained. “We don’t have 500 acres of one type of vegetable planted. We’re promoting biodiversity while doing crop associations, rotations and conserving our own seeds. We’re reducing external inputs [such as synthetic fertilizer and pesticides] because agroecology promotes independence—using wisely and consciously the local inputs you have at the farm.”

Made up of a wide intergenerational and diverse membership across the archipelago of Puerto Rico, Organización Boricuá coordinates solidarity brigades that move from farm to farm in an effort to scale up agroecology practices. At the same time, they offer mutual support work, benefiting farmers and educating the general public through hands-on work and onsite workshops.

Organización Boricuá’s support of local farms isn’t new. In 2017, after Hurricanes Irma and Maria struck, members—in alliance with international partner organizations—replanted farms and rebuilt both farming infrastructure and farmers’ homes. The hurricanes put agroecological farms to the test, according to Vázquez Negrón, who said that they did not suffer as much damage as conventional farms did.

“Despite the huge amount of rain, most of the agroecological farms retained their topsoil, so there wasn’t a lot of erosion,” he said. In contrast, “we saw [that] many conventional farms . . . on the hilly sides of Puerto Rico had a lot of landslides and erosion. That was very powerful to see.”

During the pandemic, Organización Boricuá members continue their work through virtual meetings and phone calls, following health guidelines while working the land, and educating others about them. They are also supporting farmers’ markets the government has shut down.

While the Centers for Disease Control states that the COVID risk in Puerto Rico remains high—roughly 32,000 cases and more than 400 deaths have occurred there—the territory’s outbreak isn’t as widespread as it is in the States. Unlike in Puerto Rico, in the mainland U.S. “everyone thought this was the end of the world,” Snipstal said. “They wanted to hunker down, and after the grocery stores got looted, the small farms were the ones next up on the block for people to try to get produce from.”

Although he’s unsure whether the American public will continue to buy from small farmers after the pandemic, Snipstal said that consumers need to support them and local food producers. Small farmers continue to go under, with the federal Coronavirus Food Assistance Program doling out more funds to industrialized farms than to their smaller counterparts. COVID-19, Snipstal said, is revealing “the instabilities and insecurities laden within the industrial model of agriculture.”

He sees capitalism and neoliberalism as pandemics in themselves, and said it’s not surprising that COVID-19 has both illuminated and exacerbated society’s fundamental inequities. Ultimately, the virus has heightened the public’s awareness of structural inequality, its connection to health, and health’s link to food, he added. But overhauling the food system and society’s relationship with agriculture is not a new goal, as agroecology can be traced to scientific literature of the 1920s. The pandemic may simply direct more attention to the issues at stake and amplify the agroecology platform. 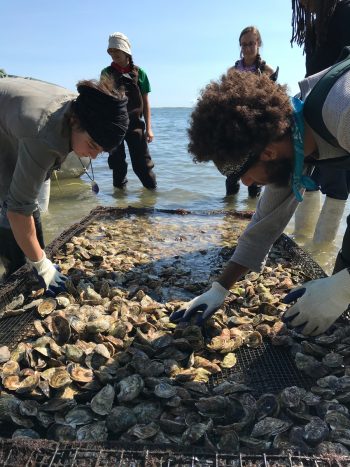 In the States, agroecology is a largely unfamiliar concept to the public, while in places like Puerto Rico and Brazil, the movement dates back decades. By 2018, the push for agroecology had become such a global phenomenon that the United Nations’ Food and Agriculture Organization held the 2nd International Symposium on Agroecology, garnering nearly 800 participants, including representatives from 72 governments.

The U.S. has catching up to do, and the People’s Agroecology Process aims to make it happen, in part, through outreach to the Black, Indigenous, and other people of color who’ve borne the brunt of the nation’s exploitive agricultural policies.

When Nia Holley received an invitation in 2018 to attend her first agroecology event, she had no idea what the term meant, but that didn’t stop the Massachusetts-based artist and activist from helping to plan a regional gathering of the People’s Agroecology Process and traveling to another one in Florida. Visiting spaces where she could connect with food justice activists demystified the concept.

“Someone said that agroecology is the process of either recovering or remembering our ancestral practices, and that really made a lot of sense,” said Holley, co-founder of the Eastern Woodlands Rematriation Collective.

Holley is not a farmer, but as someone who’s Nipmuc and Black, her activism for communities of color often focuses on food sovereignty and regenerative food systems. She serves on the board of the Northeast Farmers of Color Land Trust and has worked as an outreach and project coordinator for Indigenous-led grassroots organizations—roles that have required her to contemplate both food policy and the cultural traditions “lost” to colonization. Given this, framing agroecology as an effort grounded in ancestral knowledge and practice made the movement relevant to her, as did taking a hands-on approach during the Florida gathering.

There, Holley visited community farms and gardens and took part in educational workshops. She learned about fermenting food, herbalism, composting methods, and other techniques she could share with her community. Although she’s not a commercial farmer, Holley manages a “growing space” on her reservation and helps run a plot for Eastern Woodlands Rematriation in a greenhouse.

Agroecology’s end goal “is having that access to the land and being able to grow medicines and having that relationship with the soil and the water,” Holley said. “[It’s about] having a reciprocal relationship to all living things—human and non-human—and restoring balance.”