As the school year starts in the most of uncertain of times, these food and garden classes enter new virtual territory. 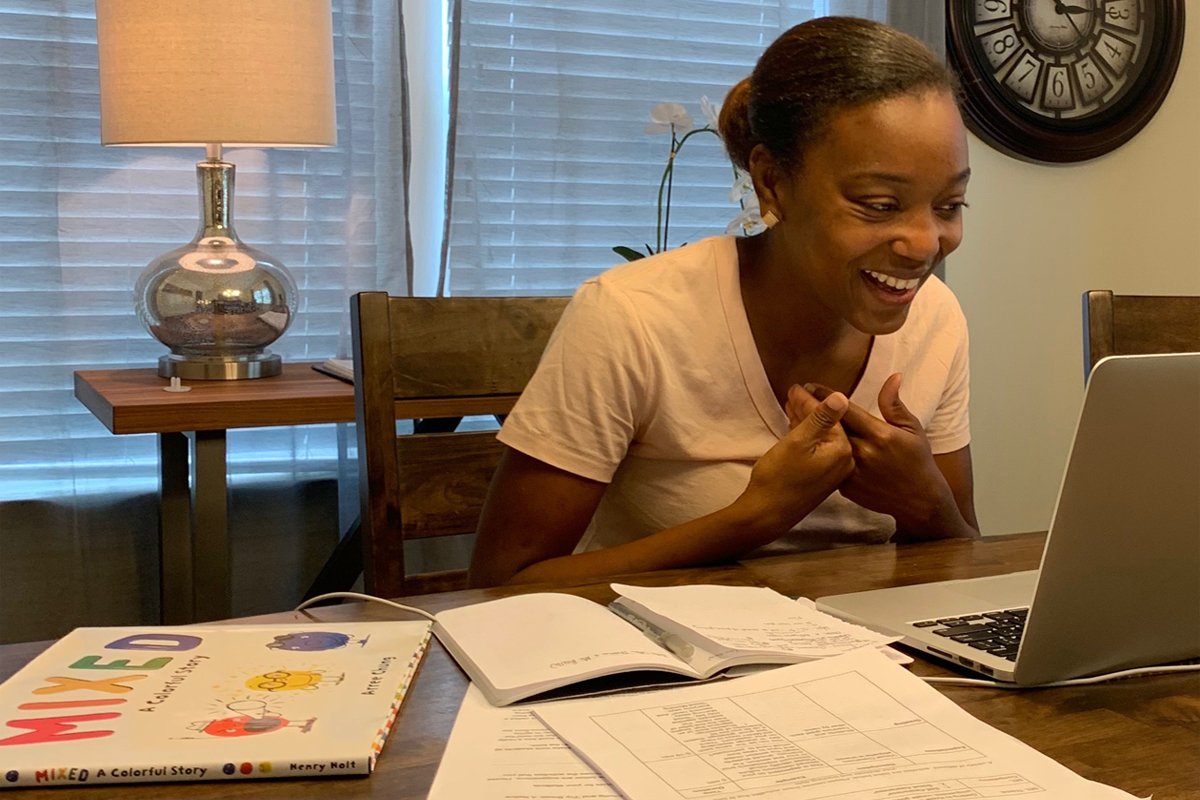 On a Wednesday in early August, gardening instructor Jill Peralta told her students to cut into their cucumbers and find the seeds. “Every plant has a different way of producing seeds,” she said, by way of an online meeting. “Seeds are exciting!”

The next day, the same Washington, D.C.-based students—who were finishing up the final week of FoodPrints’ Summer Enrichment program before starting fifth grade virtually—held another set of cucumbers up to their screens.

This time, teacher Margie Sollee showed them how to carefully slice them into thin strips to add them to lettuce wraps, before making “awesome sauce” to add flavor. She encouraged them to improvise, adding lime juice or honey. And what else might a young cook add to the sauce or wraps in the future?

“I might cut up some tomatoes and carrots,” announced Jahneice Williams, who happily nibbled on her cucumber throughout the entire class. “I had an idea I was gonna put turkey in mine,” she added.

“I might put some olive oil in it,” Jakob Green said thoughtfully, but it sounded like he was enjoying it as is. The video chat, set to speaker view, flashed away from the teacher back to Green as he exclaimed, “Mmm. Mmm. It is delicious.”

Across the country, states and districts are still grappling with whether and how their schools should open during an ongoing pandemic, weighing factors like meal access, working parents’ needs, equity in access to digital technology, and whether virtual classrooms can be effective.

In the midst of it all, programs that engage children in curricula around growing and cooking food—from New York City to Washington, D.C. to Birmingham—have created promising virtual models, demonstrating that despite significant challenges, even classes that normally involve little hands digging in the dirt or squeezing lemons can be moved online in a crisis. And as the new school year starts, many are planning to use lessons learned over the summer to build effective programs in the fall.

Across the country, programs that engage children in curricula around growing and cooking food have created surprisingly successful virtual models.

“Eventually, I hope it all goes back to how it was before, but this year we’re not going to be doing in-person food education,” said Jenn Mampara, the director of education at FreshFarm, the nonprofit that runs the FoodPrints program. “I think our responsibility is first to try to provide programming that’s going to be engaging and stimulating and not completely dependent on screens.”

At the same time, many of these programs are being defunded in both Washington, D.C. and NYC as public school districts make COVID-19-related budget cuts. FreshFarm, for one, is struggling to figure out what’s possible with only 30 percent of its typical funding.

“We will definitely direct the resources to our schools in more vulnerable neighborhoods, but really everybody is in that situation right now,” Mampara said. “It’s going to affect our program at a time when kids really need it.”

Freshfarm runs farmers’ markets in Washington, D.C., and it launched FoodPrints in 2009. Before the pandemic, FoodPrints teachers were teaching lessons that involved planting and harvesting food in school gardens and cooking and eating nutritious meals to students from preschool to fifth grade in 15 public schools.

When those schools shut down in March, the immediate transition to online lessons was difficult, Sollee said. “We all went home at the spur of the moment,” she added.

In most of the schools, “the kids may be in underserved communities, and we’re asking them to do a class where things may not be available in the home,” says Sollee. With this in mind, her school handed out devices to students, and she continued to teach live lessons.

Many other districts did not make nearly as quick a transition or provide computers or tablets. As students start the 2020-2021 school year, millions of children across the country still lack devices and internet access, including 700,000 in California alone.

While Sollee was lucky in that regard, she had to improvise frequently. A lesson that usually involves students making a rainbow with fresh fruits and vegetables, for example, involved using whatever foods kids happened to have in their kitchens, including jelly and ketchup.

When FreshFarm later surveyed D.C. teachers on challenges and opportunities for improving the classes, access to supplies and ingredients was the top barrier they identified. So the organization secured grants for the seven-week summer enrichment program to make sure students had everything they needed.

At the start, they delivered a large package to each of the 30 students from five public elementary schools with foundational supplies—safety knives, cutting boards, measuring cups, and gardening supplies. Then, each Monday, a delivery included fresh produce from local farms, books, seeds, and whatever else they’d need that week.

This approach has been adopted by organizations around the country. Edible Schoolyard New York City operates gardens and cooking classes in eight public elementary and middle schools. In the spring, its team assembled garden kits that included plastic pots, soil, compost, and seeds and arranged contactless pick-ups for families outside schools.

In Birmingham, Jones Valley Teaching Farm, which operates seven city farms that are integrated with public school curricula, spent the first few months after schools closed building up its library of video lessons. But Executive Director Amanda Storey said her team knew they also had to set kids up with supplies to make online classes work.

When Jones Valley enrolled 22 students in a four-week summer program, it delivered pots, fertilizing, seedlings, and other gardening supplies to students’ homes. Subsequent weekly deliveries included a family meal prepared by a local chef, plus produce and other cooking ingredients.

Storey went on one of the delivery runs more recently and said, “You knew exactly which homes were ours because there were these huge tomato and squash plants growing right in front.”

During deliveries, Storey said staff members encountered families at home in new, more personal ways. And having the kids planting and cooking at on video also increased interaction with parents throughout the week.

“The virtual component is actually a really amazing way to get families involved,” she said. In FreshFarm’s survey, many teachers reported increased parental engagement as an unexpected benefit of the virtual classes, and three quarters of the family members surveyed said the distance learning classes helped them cook together more often as a family. 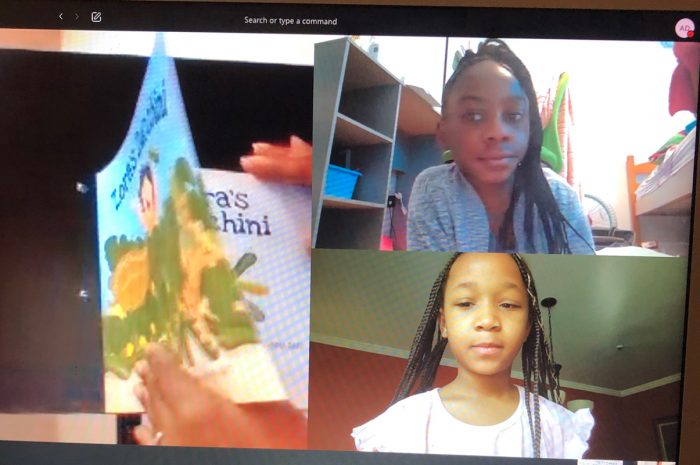 Edible Schoolyard NYC’s program director, Liza Engleberg, said their teachers also found that while more extroverted students thrive in the school gardens, the quieter students seemed to find a voice within online classrooms. “Rambunctious kids who don’t like sitting down, they can be kind of our star students in in-person garden classes, but in the virtual classes, we got to know some of the quieter kids better, which is really nice,” she said.

Still, all of the expected challenges of online learning were apparent in the Foodprints summer enrichment sessions, too. Some children didn’t log on for class at all, and many couldn’t find the supplies they had been sent. Some had their cameras turned off, which made it difficult for teachers to make sure they were following along. (Teachers feel that forcing students to turn cameras on, however, is too invasive, especially without knowledge of a child’s home environment.) Shoddy internet connections also meant that both instructors and students froze at certain moments, adding breaks to the instruction.

It all felt similar to the everyday difficulties of wrangling the attention of fourth graders, with an extra layer of distance further reducing educators’ control. And when the real task at hand is to use tactile, hands-on learning to help students make connections between food, health, and the environment, distance adds even more challenge. “How do you pull carrots from your computer screen?” Storey asked. “It’s not easy.”

All these challenges are forcing edible educators to think creatively. When COVID-19 first shut things down, both Jones Valley Teaching Farm and Edible Schoolyard NYC planted their gardens for full production instead of teaching and they have been harvesting the food to donate to local families in need, like many other groups around the country.

But Jones Valley is also making a concerted effort to bring the feel of the farms to the students at home, by filming their video lessons in the gardens. That effort will continue for at least the first few months of the new school year; Birmingham City School officials were working to distribute thousands of electronic devices before students started a fully remote schedule on September 8.

And Engleberg said Edible Schoolyard has loosened its orthodoxy around the total sensory experience of being in the garden and is now able to operate in a way that might combine analog and digital learning in the future. That could be particularly helpful in NYC, which is still planning to open public schools with a combination of in-person and remote learning on September 10.

“We used very little technology in our classrooms before . . . and so I’m glad that we’re good at that now and that we’re incorporating it,” she said. “But if they never got their hands in the dirt, I would be very sad.”

In June, several organizations launched a national COVID-19 outdoor learning initiative, intended to repurpose outdoor learning spaces to allow for better social distancing indoors, and many school garden groups have been working to figure out how they might be able to use their spaces to contribute to bringing children back to school safely. On August 24, NYC Mayor Bill de Blasio announced a plan to encourage outdoor learning.

In the meantime, Mampara said that while D.C. schools are starting their virtual semester in just a week, FreshFarm is juggling the challenges of figuring out what it can provide with reduced funding and lots of questions about the year ahead. It’s “moving pieces trying to fit together,” she said. 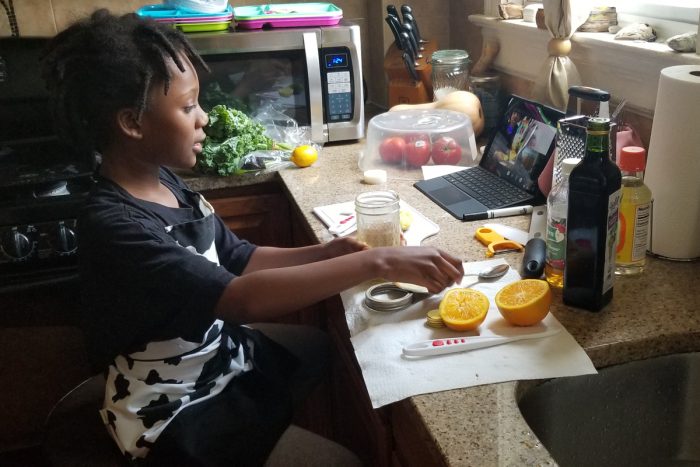 Kennedy makes a salad dressing during a lesson.

FoodPrints is planning live online gardening and cooking classes, including family-centered classes, and some home deliveries of supplies for a small group of students. The team is also working on developing recorded lessons that teachers and families can access anytime.

After a summer of sprouting flower seeds and making homemade salsa, Jahneice Williams and Jakob Green are certainly looking forward to more. Towards the end of their last cooking class, Williams shared that her favorite recipes were for Tuscan kale salad and fresh lemonade, and that she had already made both with her mom.