A Battle over Mandatory Farmworker Testing Reveals a Broken System

Michigan just instituted the most far-reaching protections for farmworkers, but some farmers went to court to scrap them. 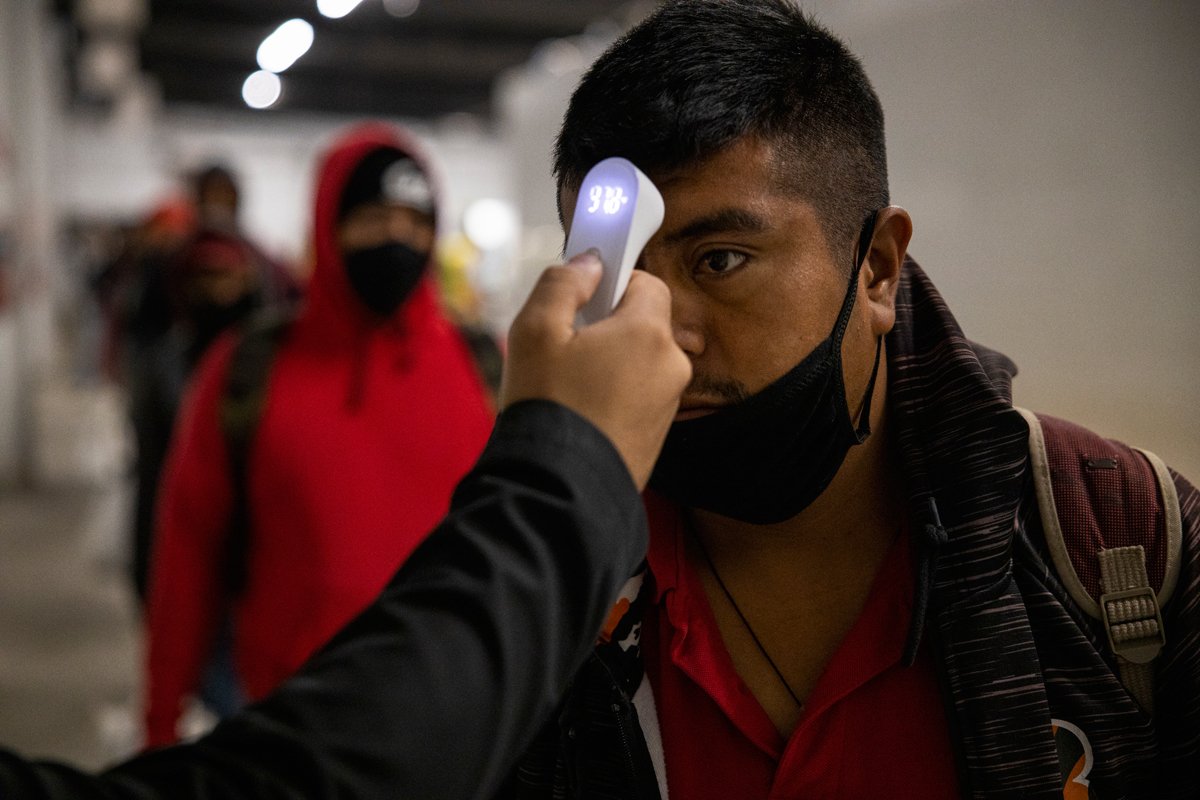 The state of Michigan became a national leader last month when it issued a strict mandate ordering farmers, food processors, and farmworker housing operators to test all of their workers for COVID-19—about 49,000 in total.

The mandatory testing emergency order was widely praised as a way to reduce the risks of mounting exposure for vulnerable workers in an industry that’s proving to be a hotbed of coronavirus outbreaks. Hundreds of farmworkers across the country have been infected with COVID-19 and multiple workers have died from the virus.

But farmers in Michigan, backed by the Michigan Farm Bureau, have filed a class action lawsuit in federal court to block the testing mandate. The group alleges that it unfairly singles out the agricultural industry and discriminates against Latinx workers based on race, violating the U.S. Constitution. After a judge last month denied the farmers’ request for a preliminary injunction, they filed an appeal; on Wednesday, the U.S. Sixth Circuit Court of Appeals upheld the previous ruling and the testing mandate. The lawsuit will now go to federal court.

And while some workers have joined the lawsuit, saying they don’t want to be forced to be tested, farmworker advocates argue that they are likely resisting the tests because they’re afraid of losing pay or their jobs—and that dynamic is precisely why the tests are necessary. They say the lawsuit is illogical and disingenuous, given the fact that Latinx people in the industry and in the state (just like nationwide) are disproportionately impacted by the virus. The testing order applies to farmworkers of all races and ethnicities, and includes supervisors and administrative staff who work at the same sites.

“The lawsuit has caused so much confusion,” said Diana Marin, an attorney with the Michigan Immigrant Rights Center, which filed an amicus brief in the case supporting the testing order on behalf of multiple state and national farmworker advocacy groups. “And it created a false narrative that Latino workers don’t want to get tested (for COVID-19) and that they don’t need this protection.”

Marin argued that the order does exactly the opposite: it protects the life and health of the workers—something all farmers should be eager to support.

COVID-19 has ravaged farmworker communities in California, Oregon, Florida, and other states. Outbreaks are especially prevalent among agricultural guest workers that come to the U.S. on temporary H-2A visas and live in communal housing. Across the U.S., the death rate from COVID-19 is much higher in counties with large populations of farmworkers, according to a study from U.C. San Diego.

Despite this, most state and local governments have released little more than recommendations—most of them voluntary—to reduce the risks of COVID-19 infection among farmworkers.

A few states have gone farther, prompted to action by the outbreaks spreading in their fields and migrant housing camps. California and Washington now require agricultural employers with more than 500 employees to provide up to two weeks of emergency paid sick leave for farm and food workers who test positive or are exposed to COVID-19. (The federal Family First Coronavirus Response Act, or FFCRA, already requires employers with fewer than 500 employees to provide those benefits.)

No state has gone as far as Michigan to proactively protect farmworkers. Numerous outbreaks on Michigan farms have prompted the state to issue several executive orders to stem the virus’ spread.

In August, after three workers died in a large outbreak, the state of Washington issued a testing mandate that requires agricultural businesses to test all employees if more than nine workers or 10 percent of the workforce come down with the virus in 14 days.

And in New York, the state will dispatch mobile testing teams to farms in rural counties that have the highest influx of seasonal workers; it will also assist with access to isolation housing for farmworkers who test positive for the virus.

But no state has gone as far as Michigan to proactively protect farmworkers. Numerous outbreaks on Michigan farms have prompted the state to issue several executive orders to stem the virus’ spread.

In June, the state issued an executive order—later expanded through a second order —to protect agricultural workers. It required migrant housing operators to create COVID-19 preparedness and response plans, among other things. And in July, the state imposed additional protections through an order that requires workplaces to designate COVID monitors, do daily self-screening, increase sanitizing, and report positive cases, among other measures.

Despite these orders, said Marin, the attorney with the Michigan Immigrant Rights Center, many farmworkers called her office and a state farmworker hotline to complain that the rules were not being followed. Some employers failed to provide masks or enforce their use, and others failed to separate sick workers. Still others discouraged testing and did not pay sick time during quarantine, dissuading workers from reporting their symptoms. And farmworkers who did want to get tested did not know where to go, Marin said.

The state proposed a free voluntary testing program for agricultural workers earlier this summer—but few farmers signed up. Then, on August 3, citing 11 recent outbreaks, Michigan’s Department of Health and Human Services issued the mandatory emergency testing order, which went into effect the last week of August. It requires agricultural employers, housing operators, and operators of meat, poultry, and egg processing facilities and greenhouses to provide one-time baseline COVID testing of all workers, as well as routine testing of new workers and those with symptoms or exposure to the virus. The order also spells out additional, stringent preventive measures.

The Michigan Farm Bureau pushed to enlist 200 farming operations to join and fund a lawsuit to block the order. Ultimately, according to the lawsuit, more than 100 farmers pledged their support (two are named in the lawsuit). Several farmworkers have also joined the litigation because the order is a major hardship for them, said Rob Anderson, Michigan Farm Bureau’s manager of government relations.

“The issue is not about whether or not a COVID test or protective measures are well intended. It’s that this order targets Latinx workers and requires them to take a test in order to come to work and earn a paycheck,” said Anderson. “There is no other instance where a segment of workers who are disproportionately affected by the virus are required to do that.”

If mandatory testing must be done, then it should be required for everyone, according to the lawsuit. Otherwise it violates Latinx workers’ constitutional rights under the Equal Protection Clause. “Pandemic or not, the State cannot subject one racial class of people to a different set of rules than it applies to others,” reads the lawsuit.

“This order targets Latinx workers and requires them to take a test in order to come to work and earn a paycheck. . . . No other segment of workers . . . are required to do that.”

Already, some workers have refused to undergo the tests, Anderson said. Farmworker crews have left their jobs at no fewer than two farms in recent weeks upon hearing about the testing requirements, he added.

“It’s a crucial time, the peak of the busy season in Michigan agriculture, and this testing order creates challenges not just for the farm, but for the entire commodity sector,” Anderson said. “And for the workers, it’s a disruption in their lives.”

In a virtual press conference, farmworkers, their advocates, and organizations representing Latinx people in the state disputed the idea that the order negatively impacts Latinx workers. To the contrary, many farmworkers have become sick with the virus and a few have died due to the lack of protections and access to testing, said Adrian Vazquez-Alatorre, executive director of El Concilio, a nonprofit that supports Latinx families in the state. While the group makes up 5 percent of Michigan’s population, Latinx people represent 11 percent of its COVID cases.

“This testing order is the right thing to do. It’s protecting the workers,” said Vazquez-Alatorre. “No more workers will have to put themselves at risk to put food on our table.”

Testing is needed specifically in the agricultural industry because there is an imbalance of power between employers and workers, said Marin, the attorney. This imbalance goes back to the historical legacy of the industry, which has relied heavily on slave labor, sharecroppers, and immigrants. Many workers face retaliation when they report violations to employers. When it comes to COVID-19, the power imbalance makes it difficult for workers to protest lax protective measures or ask for testing, which they can’t afford to pay out of pocket, she said.

“For those who are on the fence about getting tested, the fact that they’re not guaranteed paid sick leave, that moves them toward ‘I don’t want to know because I can’t afford to know,’” added Marin. “But even if it creates a burden for some . . . it provides a shield for the many workers who do want to be tested without fear of retaliation.”

Concerns Over Testing Access and Costs, Sick Pay For Workers

As growers begin to implement the order, a major concern is proximity and access to testing in rural areas, said Anderson with the Farm Bureau. And for employers who need to conduct testing on an expedited basis and provide isolation housing for new workers, the cost is a challenge, he added.

State officials have made additional resources and financing available to growers to fulfill the testing mandate, and employers can work with the state to get no-cost tests or to receive state funding to cover costs. They also can cover testing through workers’ insurance, including emergency Medicaid. The state is providing free quarantine housing to further defray the costs as well.

Thus far, the state has received requests for nearly 15,000 tests from 255 agricultural and food-processing employers, said Lynn Sutfin, spokeswoman for the Michigan Department of Health and Human Services. Of those, nearly 5,600 tests have been completed, with another 5,400 scheduled.

Advocates also worry about if and how the order will be enforced. Employers and housing operators will be required to maintain testing records, which may be reviewed by the state during inspections, Sutfin said. In addition, the state will track potential violations through input from testing providers, local health departments, and advocacy groups.

Meanwhile, the number one testing-related concern for workers is sick pay, said Marin.

Most workers should qualify for emergency sick leave under the Families First Coronavirus Response Act. And those who are residents or citizens may qualify for unemployment. Workers also can seek a grant from the State of Michigan to compensate for lost income, said Marin.

That won’t cover everyone, however. And she added, “If employers want to keep their workforce, they should tell them, ‘Don’t worry, we will pay you sick pay while you quarantine.’”