The hurricane-force winds that leveled Cedar Rapids have impacted hundreds of refugees who were considered ‘essential workers’ at meatpacking plants and supermarkets. 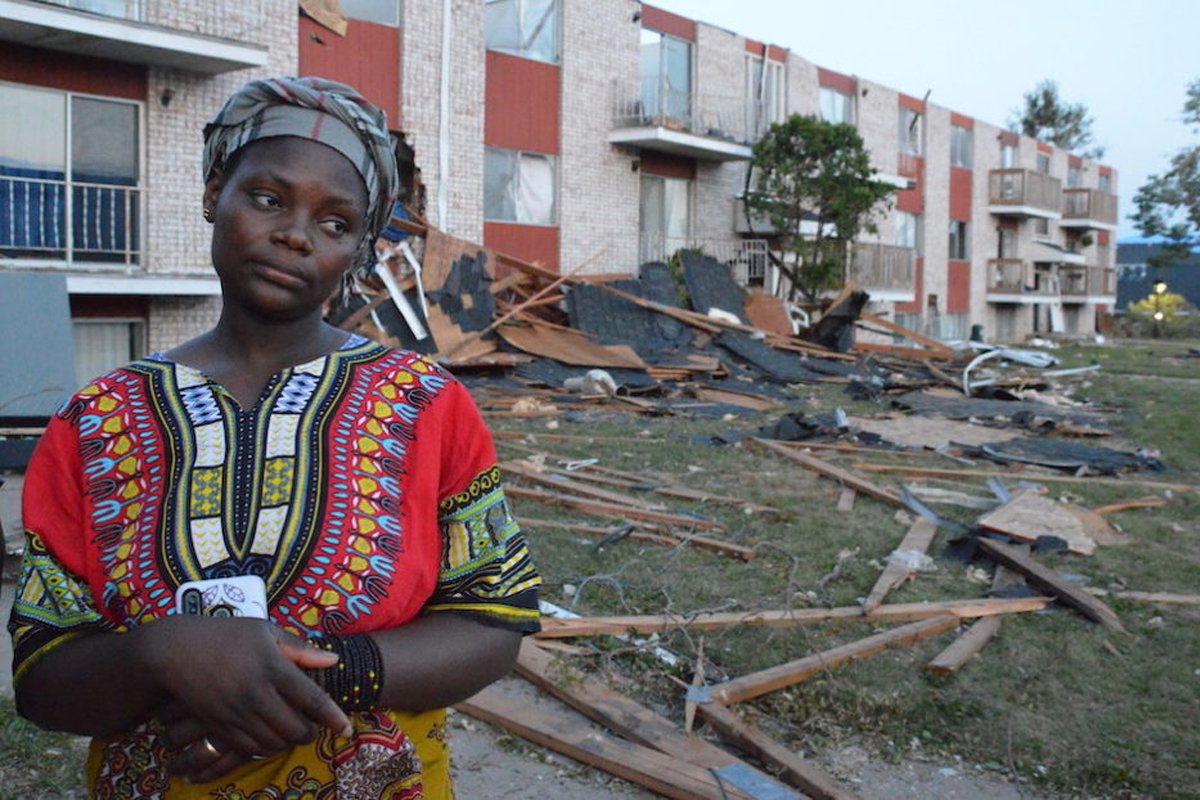 Over a week after a sudden, powerful storm brought hurricane-like winds across the plains of Iowa and wrought severe damage upon the city of Cedar Rapids, Patrick Safari stood with his wife and three children amid the ruins of his former home at the now-decimated Cedar Terrace Apartments.

A Congolese refugee who found a new home in Iowa’s second-largest city, Safari and his family have been displaced once again by the derecho storm, his former apartment among the more than 1,000 buildings made “unsafe to occupy” after being essentially annihilated by the high winds. Like many of the apartment complex’s former residents, the family stayed in a tent until they were able to move into a hotel on August 15, nearly a week after their home had been destroyed.

Safari works at a nearby Walmart in a position deemed “essential” throughout the pandemic; COVID-19 has killed more than 1,000 people in a state with a population of just over 3 million people. After dealing with coronavirus concerns, the sudden winds of destruction were just another blow in an already dangerous year.

“We have corona and then this also, that’s a bigger problem for us,” Safari said.

The derecho destroyed an estimated 43 percent of Iowa’s crops, half of Cedar Rapids’ tree canopy, and at least 64,000 people were without electricity at one point. More than 200 refugees—hailing from Pacific island nations, the Democratic Republic of Congo, and other African countries—were forced from their homes by the collapse of several apartment complexes.

While the city of Cedar Rapids attempted to crawl out from beneath the decimation and the state slowly responded, many of these refugees were forced to live grouped together in tents and makeshift shelters just outside of their former homes. Some were able to cook, barbecuing chicken wings and ribs over makeshift grills made from spare parts and biding time while waiting for the city and aid organizations to assist in temporary relocation. World Central Kitchen arrived and began serving meals to the displaced while they waited to see what would happen next. In the meantime, workers like Safari were expected to continue on at their jobs. 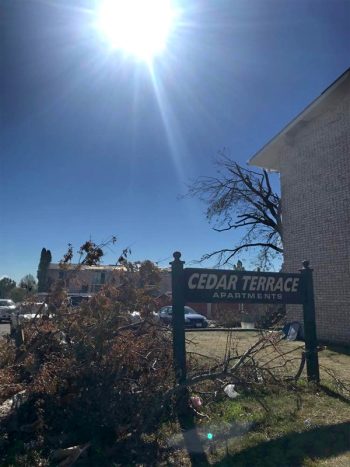 The scene outside the Cedar Terrace Apartments was busy with front loaders digging into rubble while the complexes’ former residents milled about, salvaging what could be saved. Children played basketball with a hoop that was miraculously still standing. A fire burned in a barrel, filling the air with acrid smoke as a group of Congolese men stood commiserating among the wreckage. Gis Masimbolomba was among them.

Since his apartment had been made uninhabitable, Masimbolomba had been living at a nearby motel. Like many others, his car is now inoperable. Without it, he cannot consistently travel to his job at National Beef in Tama, a meat-processing plant about an hour away from Cedar Rapids that employs many African immigrants.

“I need my car fixed. I’m sleeping at this motel, my wife comes in the morning,” he said. “My son sleeps somewhere else. I need some help. I want to move to a new apartment. I don’t know how to find one. I need to get out of the motel, but I don’t know what to do.”

For Masimbolomba and other workers like him, the loss of basic essentials like housing and transportation comes after months of working and living in daily fear of contracting COVID-19 as a workplace hazard. In April, the National Beef meat-processing plant closed for a week after reporting 155 out of 500 employees had tested positive for the COVID-19.

Refugees from all over the world work in meat-processing plants, where conditions were often considered dangerous even before the pandemic. Advocates have decried the practices of companies that own these plants, many of which have sped up their lines, and keep workers from social distancing.

“We have been really concerned about these businesses’ failure to protect workers and we had these concerns even before the pandemic,” Grace Meng, a representative of Human Rights Watch, told Civil Eats. “It’s clear that a lot of the dangerous practices at work created an ideal opportunity for the virus to spread.”

“We’ve seen over and over again that corporate ag, and large meatpackers in particular, consider their profits more important than the people of Iowa,” said Emma Schmidt an Iowa-based organizer for the national advocacy group Food and Water Watch. “Big Ag prefers to garner favor among Iowans with negligible acts like giving away pork loins during the holidays or sending home dollar-off coupons with school children rather than taking meaningful action to support our communities.”

Since the coronavirus pandemic began, the Congolese community in particular has borne an outsized amount of the risk, often working at essential grocery jobs or in close quarters at meat processing plants.

Out of the 327 refugees living in Cedar Rapids, 255 of them are Congolese. Since the coronavirus pandemic began to spread through the state in March, the Congolese community in particular has borne an outsized amount of the risk, whether that’s because they’re working at essential grocery jobs or in the close-quarters conditions at meat processing plants like National Beef and Tyson Foods.

Traditional burial is important in the Congolese community, which can mean higher costs. EMBARC Iowa, an organization that primarily supports Burmese refugees resettled in Iowa but offers aid to a refugees from a variety of backgrounds, raised money in May for the burial of Wiuca Iddi Wiuca, a Congolese man living in Des Moines who died from the coronavirus.

Sylvain M’zuza, a Congolese pastor who has been working with the International Cultural Center in Iowa and the newly created Emerging Communities Crisis Coalition to provide aid to displaced refugees in Cedar Rapids, had been helping distribute masks and educate the refugee population about protecting themselves from COVID-19. Now, just as efforts to mitigate against the virus were starting to take hold, the same people are in sudden need of food, supplies, translation services, and long-term housing.

While nearly the entirety of Cedar Rapids’ 133,000 residents have been reeling from storm damage, the local and state response has been strained and the news of the city’s destruction was slow to arrive nationally, partly due to the crippled information infrastructure.

“We are working closely with emergency officials and community partners on the ground to identify safe and secure housing for the refugees in Cedar Rapids,” a spokesperson for the Iowa Department of Human Services told Civil Eats.

And M’zuza is also focused on the immediate need for transportation to the plant. “We need to get them to one spot where they can take the bus to Tama. [The city of] Tama is also working with us and the needs for transportation.”

According to a spokesperson with the Center for Worker Justice of Eastern Iowa (CWJEI) this situation has complicated the transportation. Prior to the derecho, workers would meet at one spot near their homes and carpool to National Beef in cars of four to five people, which was already putting them at high risk of spreading the virus. Now, with workers placed in various temporary living situations, it’s more difficult for everyone to meet at a centralized location. Some workers are able to get to work or arrive late, but others are avoiding traveling in larger groups out of fear of contracting the coronavirus, and missing days of work.

“Most of these workers came from a refugee camp, and now the fear of living in a camp again is coming back. . . . Some of them are reliving life in the camps because they’ve lost everything and they’re not receiving the proper help.”

It’s unclear at this time what, if anything, National Beef is doing to assist these refugees, who make up a significant portion of their workforce. The company did not respond to Civil Eats’ request for comment. On August 20, Tyson Foods announced a partnership with the Salvation Army to give away frozen chicken breasts throughout Cedar Rapids.

“They rely on the workers, so they should be helping make it easier for them,” the CWJEI spokesperson said, who wants to see National Beef step up to provide transportation or temporary housing closer to the plant.

“Most of these workers came from a refugee camp, and now the fear of living in a camp again is coming back,” she added. “Some of them are still sleeping in their cars because they’re afraid. Some of them are reliving life in the camps because they’ve lost everything and they’re not receiving the proper help.”