Op-ed: A New Row-Cropping System in Iowa Offers Some Reasons for Optimism

A pioneering approach to raising livestock and growing crops on the same land could diversify farm country, bring more income to farmers, and feed the communities where food is grown. 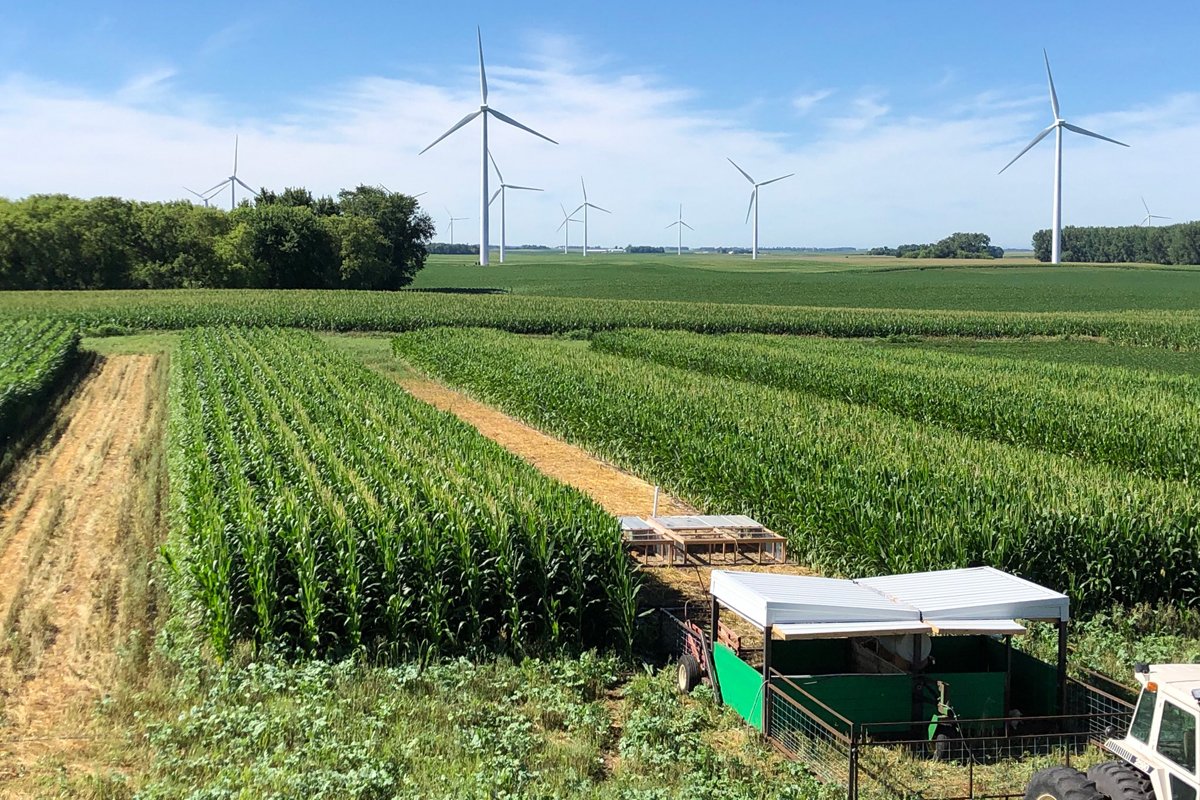 We all could use some good news. Here is some. This is a story about breaking free. There’s more than corn, beans and hogs growing in north-central Iowa this summer. It turns out that the future may be taking shape just outside Buffalo Center. That’s where farmer Zack Smith has set aside one of his 305 acres of corn/soy to experiment with a system that he calls the Stock Cropper. As the name tells you, both livestock and plants are involved. In the same field. At the same time.

The setup involves alternating strips of 12 rows of corn and 20 feet of annual pasture. The pasture is a mix of five species selected so that they provide dependable growth during both the cool and hot parts of the season (forage rape, field peas, oats, annual ryegrass, and Sudan grass). This forage is to support a menagerie of goats, sheep, hogs, and chickens that are each performing different jobs.

The livestock live in a mobile pen that provides them shelter, food and water, allowing them to range in the open while not damaging the corn crop. The mobile barns move 11 feet daily through each pasture strip, permitting the livestock to methodically convert forage and soil insects into meat and fertility for the soil by just being themselves.

There are two different timelines explaining how Smith arrived at the Stock Cropper system. The longer timeline has to do with the fact that Smith entered farming in 2010, at the height of the ethanol bubble and $6 corn, but now finds himself sorting out how to make less than a half section pay for itself under depressed commodity prices.

The shorter one is that the scheme was devised in February of this year, in a fevered exchange of ideas between Smith and Minnesota farmers Sheldon Stevermer and Lance Petersen. The complex equation these farmers are aiming to solve boils down to taking more control of their own livelihoods through better margins.

But instead of trying to do that like everyone else, falling for the “race to the bottom” strategy of producing ever-greater volume of commodities to make up for sinking prices, they are devising ways to produce those commodities, plus actual food, in the way that society is increasingly demanding. For example, Smith believes that “soil health” has to be more than a buzzword. He’s designed his system so that it incorporates biodiversity and the ecological processes it takes to actually build soil health. 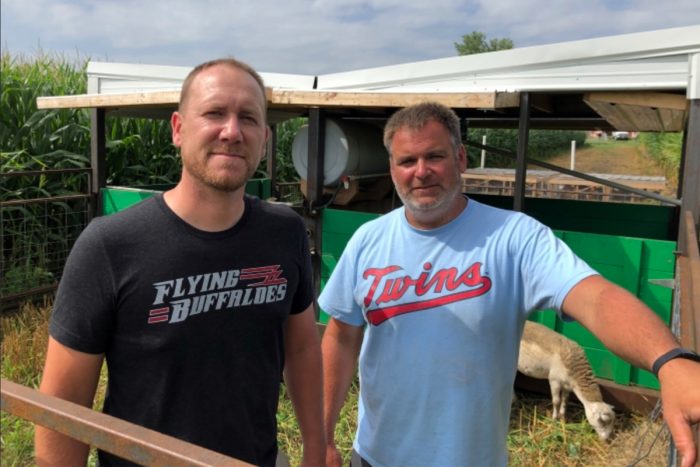 Zach Smith, left, and his friend Sheldon Stevermer, a southern Minnesota farmer and co-designer of the system. (Photo by Jordan Newton)

Why is this a story about liberation? The manacles that keep Midwestern farmers trapped in a low-price/high-volume, no-win universe exist because the region has specialized in producing grain and livestock—separate from each other, and because decisions that influence grain prices are largely out of the control of farmers (see: fickle markets and trade deals that too easily become political punching bags).

So, then farmers depend on government programs to make up for prices that in most years are below the cost of production. To qualify for those programs, farmers need to demonstrate good faith efforts to consistently produce grain efficiently. That drives overproduction, surplus, and low prices. The futile cycle reinforces itself.

Smith believes that the pandemic has taught us that there is value in keeping food production closer to eaters.

When I asked Smith whether he was worried about his pasture strips diminishing the corn base that qualifies him for government programs, he surprised me by saying, “We’re taking zero consideration of farm programs and payments in developing the Stock Cropper. We want to build a system that has the economic and ecological resilience and diversity to limit risk on our own. If the government decides to come along eventually, so be it. I’m not waiting for the USDA to give me the OK. The opportunity cost is too great.”

Of course. The way to free yourself is to just cast off a yoke if it’s of your own choosing.

The principle of resilience, of spreading risk by diversifying his portfolio, applies across the board of Smith’s businesses. In addition to his farm, the young entrepreneur supports his family through his own consulting services, a seed dealership, and sales of chemical crop protection, soil sampling services, and cover crop seed and seeding. He believes that the pandemic has taught us that there is value in keeping food production closer to eaters. The meat coming off his farm will come with a different story than the conventional sort, and he thinks there is a class of consumers who will be interested in that.

The potential for that strategy to be successful is substantiated by data from the Leopold Center, and by our own analysis at the Union of Concerned Scientists, which shows that there is a market for local food in Iowa of $800 million to $3 billion. That, in turn, could support 4,249 to 16,997 mid-size farms like Zack Smith’s. This isn’t insignificant “niche” farming.

And lest you think that this smacks of romantic, backward farming, you should know that Smith and his farming friend, ag engineer and co-creator Stevermer, designed and manufactured their mobile pen on-site with CAD software. The structure features an ingenious rainwater collection system to supply the automatic waterers, and their plan for this fall is to convert the mobile barn to autonomous advancement through the pasture strips, using solar panels to power electric motors.

They practice precision nutrient placement. They post weekly updates on YouTube and livestream on Facebook every evening so viewers can track the development and happiness of the livestock. And, this former agronomy professor must tell you that their corn production system is a marvel.

The population density of their 12-row corn strips is graduated from conventional densities in the center of the strip to high densities on the edges, structuring the volume of the canopy to make the best use of sunlight. Even the cultivars are chosen carefully, with a flex-ear hybrid for the conventional densities in the middle of the strips and a relative of the record-yield-setting hybrid on the margins of the strips to take advantage of the light-rich environment there. Of course, they precision fertilize the different population densities according to their yield expectations, higher on the edges than in the center.

I promised you a story of agricultural hope. This year’s cautious one-acre experiment has not been free of setbacks, and those have provided the learning experiences that Smith and Stevermer knew they would need. The results have been sufficiently encouraging to justify plans to scale the system to 30 acres next year. 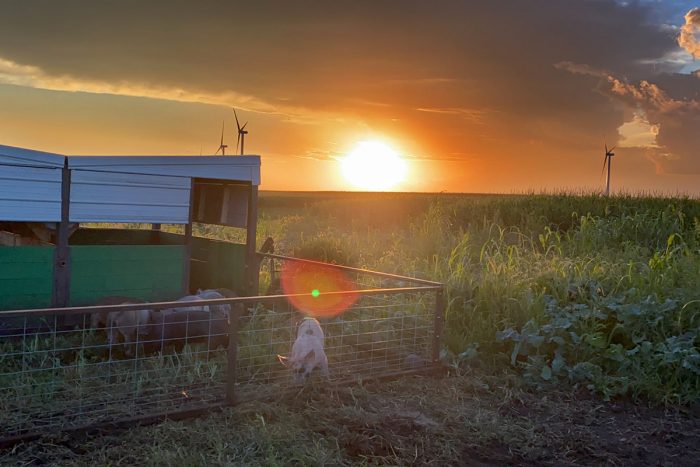 Ultimately, this kind of innovation is about making knowledge and technology serve different objectives than the conventional ones. Beyond “agri-hacking,” the new wave of farmers such as Smith and Stevermer are forming community with one another across the country, exchanging ideas and innovations on social media, and affirming their commitment to choose pathways that benefit their communities and not just their own farms.

In the original specification for the Stock Cropper, Smith and his friends were aiming for a system that would allow the farmer to retain more money, but also to add jobs to the local community. He told me that as they scale, he sees “having several creative go-to-market paths for consumers to access our products, but more importantly, the process and story, and creating shared experiences.”

He tells of the lesson that Joe Bassett, CEO of Dawn Equipment, drove home to him about the simplicity of today’s huge extensions of monocrops: “If we’re left with nothing but easy tasks as farmers, then how much retained value do we deserve at the end of the day?”

I asked Smith why he found it easier than most farmers to imagine different agricultural systems. And this is where I must disclose to you that Smith was my student in a crop physiology course at Iowa State University about 20 years ago. I tell you this not because he picked up any of this from me, but to explain to you why his answer included a great deal about his life story since graduating from ISU.

The part that hit me most, and gives me the most hope, was this: “Having two teenage daughters has taught me that the future is important. Watching rural communities change over the past 20 years has taught me a lot about the value of connection.”

A version of this article originally appeared in The Storm Lake Times, and is reprinted with permission.

Ricardo Salvador is a senior scientist and director of the food and environment program at the Union of Concerned Scientists. Read more >