A new study shows the nutrition and environmental benefits of more than 600 perennial species—from artichokes to chaya—which address climate mitigation, biodiversity, and nutrition. 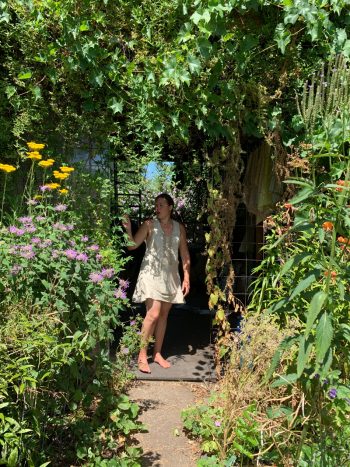 Marisha Auerbach in her permaculture yard. (Photo by Virginia Gewin)

Marisha Auerbach’s home garden is an edible landscape. Archways of table and wine grapes shade the entry while tree kales, tree collards, and stinging nettles dot the pathway. Auerbach, a permaculture teacher at Oregon State University, and her partner, Zane Ingersoll, estimate roughly 80 percent of their diet comes from this 6,600-square-foot lot in Portland. About 60 percent of the garden is perennial plants, trees, and shrubs—meaning they grow all year long and don’t need to be replanted or reseeded the following year.

Perennial agriculture—including agroforestry, silvopasture, and the development of perennial row crops such as Kernza—has come to prominence in recent years as an important part of the fights against soil erosion and climate change. Not only do perennial plants develop longer, more stabilizing roots than annual crops, but they’ve also been shown to be key to sequestering carbon in the soil.

Now, a new study in the journal PLoS ONE is pointing to vegetables like the ones in Auerbach’s garden as another important addition to the list. The perennial vegetables most people are familiar with are artichokes or asparagus, but the study expands that list, providing a detailed nutritional analysis of 613 species and a full accounting of their potential to pull carbon from the atmosphere.

“Greater adoption of a wider array of perennial vegetables could help to address some of the central, interlocking issues of the 21st century: climate change, biodiversity, and nutrition,” wrote lead study author Eric Toensmeier, a lecturer at Yale University, a senior fellow at Project Drawdown, and author of the Carbon Farming Solution, in the report’s introduction.

“I hope to put some new crops in the limelight, specifically trees with edible leaves such as moringa and Nopales cactus, which turned out to be some of the most nutritious leaves,” says Toensmeier. Since “vegetable” is a nebulous term, the study defined it as woody plants, vines, and herbs that live three years or longer. Toensmeier and colleagues found 154 species that had superabundant nutrient levels; 23 of those were superabundant in four or more nutrients.

As the pandemic focuses greater attention on the sustainability and resiliency of food systems, this paper offers a “to-do” list of research questions for people who study non-traditional crops, says Courtney Leisner, a global change plant physiologist at Auburn University. It will prompt readers to ask: Where can these crops be grown? What percentage of the nutrients are bioavailable? How climate hardy are these crops? Perhaps the most immediate question is: “Where should we focus our resources next?” says Leisner, especially for farmers and scientists seeking nutritious, resilient crops, including ones that can grow in marginal soils.

Awareness of the potential of perennial vegetable crops—a common tenet of permaculture—has grown steadily in the greater Pacific Northwest region over the last 20 years, along with interest in home gardening, says Auerbach. And that interest exploded this year. She knew in January that it was going to be a big gardening year—then COVID-19 hit. Days before Portland shut down, Auerbach’s email blew up with inquiries from people eager for tree collards and other perennial vegetable starts with low-effort gardening and a high nutrient pay-off.

“Milkweed has eight times more vitamin C than oranges,” says Toensmeier. But the number one most nutritious food in our study was Gấc (botanical name: Momordica cochinchinensis), a bitter gourd native to Southeast Asia, he says. The second most nutritious perennial vegetable identified in the study—known as Chinese mahogany or “the beef and onion plant”—is a tree with tender new leaves that have a savory bouillon flavor, according to Toensmeier.

“We grow way more starch and sugar than we need, and not nearly enough fruits and veggies.”

“The botanical diversity is enormous, but the greater majority [of these foods] haven’t left their home countries,” says Toensmeier. And if they have, they haven’t made it to the U.S., he adds. While oniony leaves may be a hard sell for many Americans, Toensmeier says, he’d like to get more people eating mulberry leaves, which are rich in iron and zinc, and grow almost everywhere in the U.S. “There are so many cases where a plant on this list will have more than twice the amount of key nutrients of traditional vegetables you can buy at the store,” he says.

If we want to meet all of the vitamin and mineral needs around the world, we must dramatically increase vegetable and fruit production, adds Toensmeier. “We grow way more starch and sugar than we need, and not nearly enough fruits and veggies.”

The U.S. lags behind the rest of world when it comes to planting multi-year crops, says Toensmeier. But perennial vegetables are gaining traction in other countries. ECHO, an international agricultural development organization in Fort Myers, Florida, trains farmers to grow nutrient-rich crops—often those able to come back year after year—to fight malnutrition in Haiti, Thailand, and several African countries.

While they weren’t surprised that one of the crops they promote, chaya (Cnidoscolus aconitifolius), was also on Toensmeier’s top multi-nutrient species list, they appreciate the sweeping analysis of so many perennial vegetables that he provided. Not only will this paper serve as a database of go-to information, it will also help us fill in any remaining gaps in nutritional information, says Stacy Reader, a research associate at ECHO.

Still, encouraging communities to embrace new crops is a tricky business. Reader says ECHO sends seeds and cuttings from over 350 varieties to partner organizations and individuals working with smallholder farmers in the tropics to increase food security.

“Adoption [of a new species] goes over best when it’s needed by the community and promoted by farmers in the region,” says Reader.

In Latin America and Southeast Asia, where it is more common culturally for people to plant perennials in cropping systems, ECHO’s regional impact teams stressed nutrition while promoting leafy perennial greens. In East Africa, by contrast, adoption of a new food source, such as chaya, went best where farmers already knew how to process or consume a similar crop. “While these vegetables are very nutritious, they need to fit the cultural needs of people,” says Reader. “That can’t be overlooked.”

Further, while these healthy crops will come back each year, they often take an extra level of effort to be edible. For example, Toensmeier notes that Chinese mahogany, which resembles a sumac tree, needs to be pruned to promote production of an abundance of edible, tender new growth. At the other end of the spectrum, chaya, which tastes similar to Swiss chard, must typically be cooked for a few minutes to remove toxins from the leaves before it’s eaten.

ECHO promotes eating a diversity of greens, says Reader, which would also avoid the boom-bust cycle of hype around novel foods. Personally, she adds, “I think if we could learn to diversify diets instead of seek nutrition from one superfood, we’d be a lot happier and healthier.”

Benefits to the Environment

In addition to nutrition, Toensmeier and colleagues calculated the carbon sequestration potential of crops that do not have to be replanted each year. They estimate that increasing perennial vegetable acreage to 26 million hectares (from roughly 3.3 million hectares today) by 2050 could store an additional 280.6 million metric tons of carbon dioxide equivalent per year, roughly the same as cutting meat from American diets or eliminating the emissions of 60 million cars.

“We should take a more holistic view, focusing on highly nutritious crops that are resilient to shifting temperatures, those able to grow on marginal lands or as part of agroforestry.”

While that’s a sizable potential impact, farmers on the ground are often more interested in shorter-term benefits they can experience directly. In the case of agroforestry, Reader says, “farmers see the benefits of having trees on farms—chiefly, the soil stays in place,” she says. “The trend is for more perennials to being grown together with annuals, largely because most grow on small acreages, so there are no large swaths of land where mechanization is necessary.”

Although perennial vegetables may not become widely planted crops anytime soon, they could play a valuable role in making the food system more resilient. The goal is not to find a single “superfood” within the perennial vegetable list, says Leisner. Rather, she adds, “we should take a more holistic view focusing on highly nutritious crops that are resilient to shifting temperatures, those able to grow on marginal lands or as part of agroforestry.” Leisner adds that it puts a lot of emphasis on a small number of plant families, but that more research is needed into orphan crops—those species that receive little to no attention from researchers—to mitigate climate change and support our growing population.

Auerbach agrees. “While infrastructure for perennial crop research has grown over time, I would love to see an experiment station dedicated to perennial crops,” she says. “It’s time to get serious about climate change and designing our diets to increase resiliency, including the often-overlooked ecological functions of our food system.”