Will COVID-19 Make Big Meat Look Like a Bad Investment? 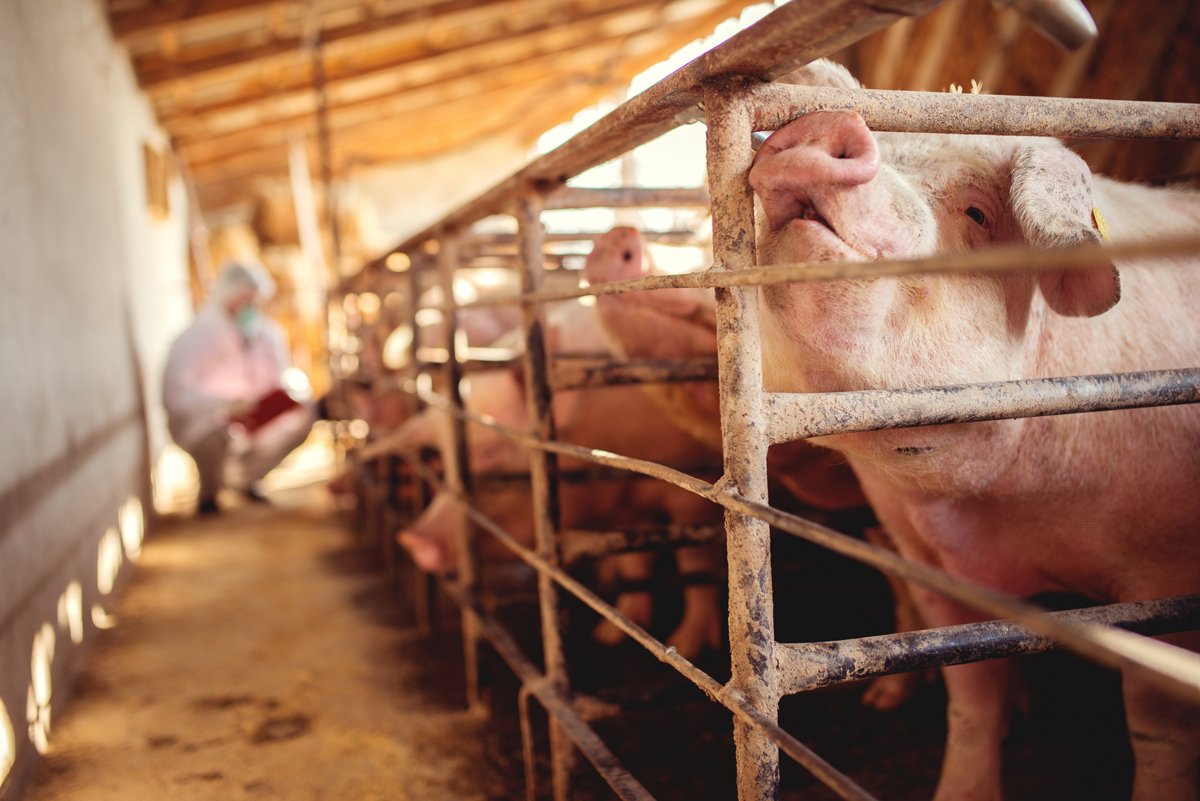 Jeremy Coller would like to be remembered as a man who saved “a few cows from a factory farm.” But unlike animal rights activists who break into barns to document abusive practices or environmentalists who lobby for legislation to curb pollution associated with animal agriculture, the British financier’s approach is all about capital.

“By making factory farming about materiality and not morality, I changed the conversation and brought the risk of it becoming a stranded asset to Wall Street,” he wrote in an essay explaining the inspiration behind Farm Animal Investment Risk and Return (FAIRR), the flagship initiative of his foundation.

Now, that conversation is getting louder.

Since 2015, FAIRR has been developing resources for investors and engaging with the world’s biggest food companies to highlight and reduce what it sees as risks to investing in industrial animal agriculture. It was one of several groups that helped push McDonald’s towards sourcing chicken produced without the use of medically important antibiotics.

The COVID-19 pandemic has brought the risks associated with large-scale animal ag—such as the ways deforestation and the concentration of animals contribute to the spread of zoonotic diseases and the ways factory conditions harm workers—into the national spotlight.

“It’s been a convergence of almost every single risk we’ve been talking about for the past four years,” said Maria Lettini, FAIRR’s executive director. “COVID-19 brought it to the fore.” 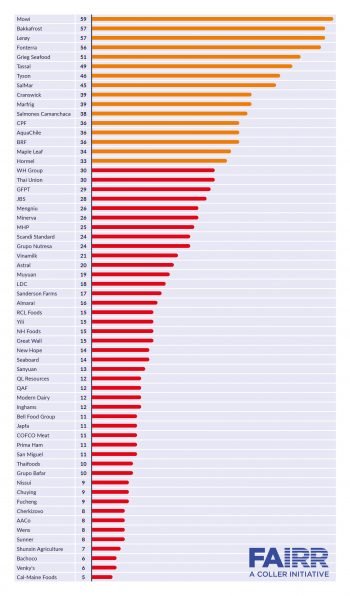 A chart from FAIRR showing the relative risk of meat producers. (Click image for larger version)

In June, the London-based FAIRR released a report that ranked the biggest global meat companies on “pandemic risk,” looking at both their vulnerability to another pandemic and their likelihood of contributing to one. It found that more than 70 percent were “high risk.” Just weeks before, the head of commodities research at Goldman Sachs told reporters that the only commodity market “looking as precarious as oil” was livestock.

However, despite increased attention to risks, most meat companies are already rebounding from COVID-related disruptions, and the pandemic has also exposed the limitations of FAIRR’s approach, which raises questions about whether it will provide real momentum to shift investors’ dollars in a way that alters the future of the food system.

The conventional view in investment, explains Dan Miller, founder of Steward, an investment platform for small and mid-size sustainable farms, is that there is always a trade-off between returns and responsibility, but returns have often been seen as the only real metric that matters. Over the past decade, that has started to change, especially in the face of the climate crisis, and companies have developed a range of approaches to investing in food and agriculture with global impact in mind.

Companies like Steward and RSF Social Finance, a financing platform for social entrepreneurs, are at the far end of that spectrum, attempting to funnel capital to businesses such as small organic farms and local food hubs that don’t generate returns high enough to attract traditional investors. Their work is often referred to as impact investing. More traditional investment firms, meanwhile, have been incorporating environmental, social, and governance (ESG) considerations. “It’s now a normal, common part of the conversation when you’re speaking to investors,” Lettini said.

FAIRR’s strategy is to leverage those ESG considerations. And it makes the case that some standard practices among meat companies, such as widespread antibiotic use and deforestation, do not just present risks to public health or the environment, but also threaten the stability of and return on the investment itself.

Coller is a prominent figure in private equity, especially in Europe, and Lettini said his vision for FAIRR was prompted by an interest in evaluating ESG risks at his own firm. As a longtime advocate for animal welfare and safer food systems, he saw a gap where risks were not being identified.

Coller eventually realized that “If [you] want to fast-track these issues, it’s the investor community that’s going to have to engage on them,” Lettini said. “Because if you’re denying capital to companies, that’s a very quick way to see change or at least to have them engage with you.”

Lena Brook, director of food campaigns at the Natural Resources Defense Council (NRDC), who works to reduce antibiotics in meat, said that she sees FAIRR’s approach as a complement to consumer-facing advocacy.

“The consumer groups speak directly to the public . . . whereas the investor advocacy groups are speaking directly to shareholders,” she said. “What really struck me about FAIRR when they emerged was that they were able to get this significant mass of investors to say to the world, ‘We’re speaking in one voice, and we control a lot of money.’”

FAIRR does not make any investments of its own. Instead, it “galvanizes investor influence,” Lettini said, on a number of fronts. The organization tracks and ranks the 60 biggest public companies that sell meat, dairy, and farmed fish in its Coller FAIRR Protein Producer Index, using nine risk factors including greenhouse gas emissions, waste and pollution, and food safety.

One potential limitation of FAIRR’s index: Companies like Tyson—which has been widely criticized for failing to protect workers, and seen its share price drop—scored higher than many other firms.

The data is also used to produce reports, such as the one on pandemics mentioned above. While Lettini was enthusiastic about the June report’s attention to how practices like deforestation and inadequate worker protections make companies vulnerable, she says it also revealed a potential limitation of the index. Tyson, for example, performed well compared to many others, even though it’s been under fire for failing to protect workers and its profits and stock value have plummeted.

“Some of the companies perform quite well on some of those risk factors, and actually that didn’t give us any indication of the resilience of those companies up against this global crisis,” she said. “So resiliency is something that I think we are going to have to help each sector define.”

FAIRR also created a climate risk tool that investors use to assess future profitability based on the steps it’s taking to mitigate climate risks.

Investment companies that are members of FAIRR’s network represent $20 trillion in capital, according to the organization. They have access to FAIRR’s resources and also work together on “engagements,” a version of shareholder activism. The flagship engagement, which began in 2016, asked restaurants to phase out routine antibiotic use in their meat and seafood supply chains. It grew to involve 74 investors targeting 20 companies, including McDonald’s, Wendy’s, and The Cheesecake Factory.

“It started with no company having an antibiotics policy to, three years later, 19 out of the 20 companies having policies” Lettini said. However, those policies vary on details like which antibiotics will be phased out and when, and FAIRR found that “there is little transparency around implementation.”

“It’s hard to know which straw breaks the camel’s back. No matter who McDonald’s was talking to, no matter who their investors were talking to, they were hearing the same message: this is really important and you need to change.”

McDonald’s is often cited as a victory. It eliminated the use of medically important antibiotics in its chicken in 2017. Last year, it announced it was starting a process of measuring antibiotics in its beef supply and would establish targets for reduction by the end of 2020, with reporting on progress starting in 2022. But in the years that the company has committed to changes, it has also faced increasing consumer pressure and been targeted by well-organized campaigns like the Chain Reaction rankings, produced by a coalition of advocacy groups.

“It’s hard to know what the straw that breaks the camel’s back is,” NRDC’s Brook said, when it comes to which kind of pressure—consumer or investor—led the company to make the changes. Rather, she said, the most effective advocacy includes both. “No matter who McDonald’s was talking to, no matter who their investors were talking to, they were hearing the same message: this is really important and you need to change.”

And while companies have been slow to phase out antibiotic use in beef and pork, there’s no question that in the past five years, antibiotic use in chicken has decreased significantly. In fact, data shows that “full-spectrum” use that allows all antibiotics, including those important to human health, was down to just three percent of production in the U.S. in 2019. “I do think there’s been an impressive shift,” Brook said.

Green Century Capital Management, a values-driven investment firm owned by nonprofit environmental and public health groups, has been a FAIRR member since the beginning. In addition to steering clear of fossil fuel companies and focusing on sustainability-focused companies, shareholder advocacy is one of its core functions.

In 2019, it filed a shareholder proposal to push Kraft Heinz, which owns meat brands such as Oscar Mayer, to develop a strategy to include more plant-based protein. At an annual meeting in September, shareholders considered the proposal, but rejected it.

“It didn’t garner the support it needed,” said Green Century President Leslie Samuelrich. “We felt like we needed more pressure on them to take action.” They tapped into the FAIRR network and are now continuing the effort with a larger group of investors as part of the sustainable proteins engagement, which is also targeting Kroger, Walmart, and General Mills among others. “When you do it collectively, you add weight to your argument,” Lettini said.

In Samuelrich’s opinion, FAIRR has already had a “tremendous impact” in a short amount of time and will continue to move companies towards more sustainable practices as investors are made aware of various ESG risks.

But others who work in food and agriculture investment with a view toward resilience and public health are not as enthusiastic. Steward’s Dan Miller said he thinks it’s important for traditional capital to go beyond pure financial return in its considerations and that FAIRR is furthering that cause. But Miller would like investor attention to shift beyond big public food companies.

“There’s no capital for the small grassroots operators who really are driving change,” he said. “I think the counterpoint to reshuffling dollars around in public companies is: How do you get dollars to small and mid-sized companies?”

RSF says that even if big meat companies make small changes, they’re too far from a regenerative approach to help solve for issues like climate change and worker injustice.

Casey Johnson, the manager of social enterprise lending at RSF, is even more critical of an approach she described as prioritizing mitigating investors’ financial risks while helping them simply “do less harm.”

Even if big meat companies make small changes, she said, they’re too far from the regenerative approach for which RSF advocates to help solve for issues like climate change and worker injustice.

“We’re going to need over time more investors who are willing to rethink the nature of returns,” she said. “It would be really exciting to see more investors consider what it looks like to invest locally—not necessarily cutting off their market-based products, but thinking about what it looks like to have a vibrant Main Street and a vibrant agricultural sector in their own backyard.”

However, Johnson said she is excited about FAIRR’s work to increase transparency around industrial animal agriculture. And she thinks COVID-19 is likely to amplify that effect.

Leslie Samuelrich of Green Century agreed. “You can see it all through the supply chains . . . and I think portfolio managers are paying attention,” said “I really want people to start using the phrase ‘pandemic-proofing their portfolio.’”