As universities closed nationwide, many food-insecure students fell through the cracks. Staff and administrators are working to ensure they get fed. 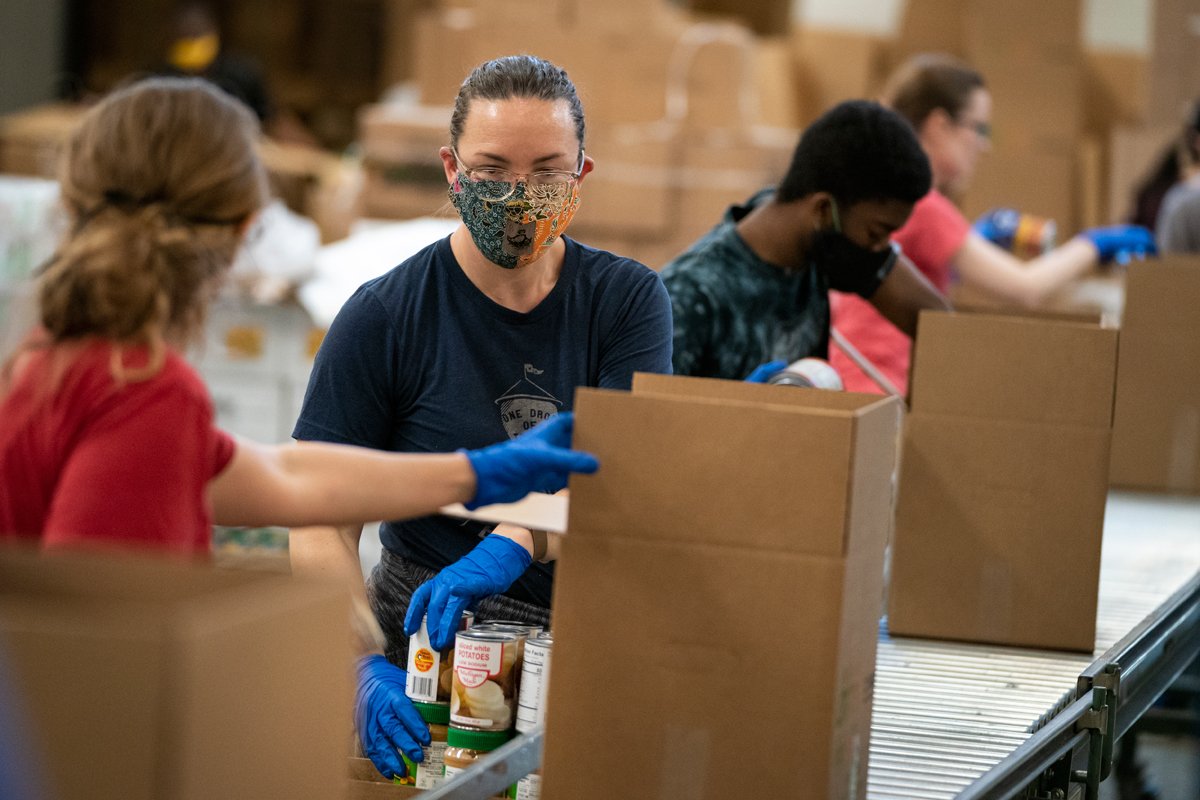 When Brandon Mathews was a senior in college at the University of Arkansas, he interned at his campus food pantry, running its day-to-day operations. He was also a client. “I often dressed in a button down and slacks, which might suggest to the world everything was fine despite my struggle with food insecurity, [because] as a young Black man, I really felt ashamed,” Mathews says.

Seven years after he graduated, Mathews is now a consultant for nonprofits and small businesses, and co-director of the campus food pantry network College and University Food Bank Alliance (CUFBA), founded in 2012; it currently has 700 members nationwide. Mathews says that, without his college pantry, “I think I would have been in a lot more debt, or [would have] not completed my degree.”

Over the last 20 years, American college students—more likely to be older, parents or caretakers, or the first in their families to get a higher education—often get clobbered by “the new economics of college,” says Edward Conroy. He’s associate director of research communications for the Hope Center for College, Community and Justice at Temple University in Philadelphia, which has partnered with CUFBA since 2017.

American workers have experienced wage stagnation since the late ‘70s. Regardless, today’s students and their families typically pay more for tuition than in decades past, partly due to the fact that financial aid hasn’t kept pace with rising college costs, says Conroy. Within this burdensome equation, the victory of a college acceptance can be quickly tempered by another reality: the inability of a college student to reliably afford three meals a day.

When COVID-19 began to close down the country in March, hunger spiked to crisis levels for students at some institutions; they lost meal plans, housing, and jobs. The City University of New York (CUNY) reported in April that the rate of food insecurity doubled among its students over 2018 numbers, for example.

In some cases, campus pantries were able to help. In other cases, they were not, as students moved away and colleges shuttered. “So many students were already close to the edge, just surviving,” says Conroy. With the pandemic, “entire support networks disappeared.”

As researchers assemble data to assess the magnitude of what befell—and continues to befall—hungry college students, advocates are also attempting to figure out how to protect this demographic in the event of another emergency shutdown, no matter where they are.

The total number of campus-based pantries across the U.S. is unknown. What is known is that they’ve become more prevalent in the last five years in response to growing recognition of need.

The pantries vary in the ways they operate. They may be student- or administration-run, staffed by paid workers or volunteers, or open for set hours or by appointment only. They may provide shelf-stable items or supplement with fresh produce from a campus farm; function as a stand-alone entity or in conjunction with a broader Single Stop initiative that provides information on applying for Supplemental Nutrition Assistance Program (SNAP) benefits, unemployment, and housing, as well as finding legal services and filing taxes.

What campus food pantries are not is a long-term solution. “They’re a Band-Aid,” says Conroy. “We’re never going to food pantry our way out of food insecurity.” In the short-term, though, pantries can provide necessary sustenance to students on non-resident campuses and those who can’t afford a meal plan. The research is clear that college students without reliable food access earn lower grades and suffer higher levels of stress.

The pandemic, too, increased stress levels, as well as food insecurity and parallel concerns as students were turned away from campuses; not every student, point out advocates, has a family residence to return to. Unfortunately, says Mathews, “as staff and administrators were scrambling to put together emergency action plans, campus-based food pantries may have fallen off the list in the hierarchy of things that had to be done.”

The Hope Center report corroborates this observation, finding that “students already saddled with basic needs insecurity appeared to be further forgotten by some institutions and policymakers [who] simply told students to ‘go home.’”

Despite the lack of attention and support, the report says, frantic food pantry directors tried to figure out how they could continue to feed students while still complying with orders to shut their doors—and reach students who were no longer living on campus.

“Getting food out from pantries . . . relies on students being able to get to campus,” says Conroy. This was an impossibility for anyone who moved out-of-state, and a hardship for those quarantining or facing reduced local public transportation. Some campus pantries that did remain open saw their clientele reduced to a trickle.

Mathews says that back in April, some CUFBA members reached out to the Alliance “trying to figure out alternate ways to distribute food [and] get students help at community-based food pantries. It was a perfect storm of challenges,” he says. “We were overwhelmed.”

Before that, in March, the CUNY Urban Food Policy Institute had surveyed a representative sampling of students to see how they were weathering the pandemic. They discovered that only a fraction were using CUNY food pantries (the system has 18 of them spread across 25 campuses). Instead, “70 percent went to a pantry in their own community,” says Institute director Nick Freudenberg. That makes it clear, he says, “that campus-based food assistance doesn’t make sense if people are not coming to campus. [University administrators] need to put their minds and resources to thinking of other services.”

CUNY did receive city funds to distribute $400 to each of 1,595 food-insecure students for groceries. But with an estimated 35,620 students experiencing hunger, that met only a fraction of the need.

Challenges were similar, if smaller in scope, at Philander Smith College in Little Rock, Arkansas. Its pantry remained open as the pandemic took hold and students were sent home. But as at CUNY, fewer students came in to avail themselves of food; clients served went from 512 in February to a low of 15 in May.

Eighty-five percent of Philander Smith students’ families have income below the federal poverty rate, so providing them with food relief meant quickly cobbling together three new initiatives, largely supported by private donations, according to its pantry director, Shannon Clowney-Johnson. The pantry began offering (local) students in need grab-and-go food baskets, but it also supplemented that program with $50 grocery gift cards and emergency funds in varying amounts, which could be used anywhere a student wound up.

California’s Central California Food Bank (CCFB) in Fresno, which works with eight colleges, explored the best ways to get food out to hungry students. Its partner Fresno City College, for example, increased the operating hours of its pantry during the pandemic. It also opened itself up to the general public; as a result, it experienced a 40 percent increase in clients—from 3,900 to 5,700 a month, although how much of that traffic was from students is unclear.

Other college pantries affiliated with CCFB either closed or saw radical decreases in clients. In these instances, CCFB reduced programming, says co-CEO Natalie Capales, and “tried to fill gaps by increasing services through other agency partners serving the same geography, as well as creating programming to expand our reach.”

One of these expanded services is Groceries2Go, which allows clients to make an appointment for an in-person pickup. The other is Take Care, a delivery service that proved a success, with nearly all pick-up slots, for between 800 and 1,000 boxes a week, reaching maximum capacity, says Capales.

“Restaurants have gone to mobile apps and curbside delivery, and we’ve seen a sprinkling of that kind of tech in the hunger relief sector,” CUFBA’s Mathews first told Civil Eats in early June. By July, he’d heard from even more pantries that had adopted services like Microsoft Bookings to allow students to virtually arrange pick-ups.

The Future of Feeding?

Those interviewed for this article don’t expect the increased levels of food insecurity among college students to drop off anytime soon. “These challenges are not temporary,” cautions the Hope Center in its report. That’s not only because epidemiologists predict that the novel coronavirus will linger for months, if not years, but because the havoc it has created in many already at-risk systems cannot be easily undone.

“Levels of food insecurity among the general population of New York are still sky-high,” says CUNY’s Freudenberg. “People are regularly spending more money on food than pre-COVID, and large numbers of households have unemployed members and no income.”

Freudenberg, Conroy, and others already strongly advocated for revised thinking about how to address food need among college students. The pandemic has only increased their insistence on the urgent necessity for change.

For starters, Freudenberg wants to work to ensure maximum student enrollment in SNAP. A pre-pandemic report showed that 41 percent of surveyed CUNY students were eligible, but only 20 percent were enrolled (for starters, many students believe, erroneously, that they aren’t eligible). “If they can get $100 or $200 a month for food, that’s a concrete way to increase food security,” Freudenberg says.

University administrations everywhere should prioritize connecting students with SNAP, which contains regulations that were “actively written to discourage them from applying, to reduce the cost of the program,” Conroy says. “This is where institutions can help.”

Additionally, the Bill & Melinda Gates Foundation is funding a new Hope Center project “to look at emergency aid as a potential solution,” Conroy says. “There’s some increasing evidence that [this] could help students bridge gaps in resources and stop them from dropping out of school.”

And there’s also some chatter around the idea of a universal free meal program at colleges—an extension of the National School Lunch program—which Conroy calls a “genuine, ambitious, policy proposal that we’ve suggested.” Already, on an individual institutional level, a vaguely affiliated concept, Swipe Out Hunger, which transfers unused meal swipes from student to student, shows some promise, he says.

These overhauls go hand-in-hand with calls from various quarters to rework the financial aid system or pivot to debt-free college. More immediately, though, advocates hope universities will work quickly to prepare for future pandemics.

Do campus food pantries “have disaster plans in place?” asks Capales of CCFB. “Are they taking the time to evaluate what they did well and where they had gaps they need to shore up? They need to reflect on how they could’ve responded differently [this time] and start institutionalizing some of those processes now. Don’t wait.”