Op-ed: Speeding Up Poultry Lines in a Pandemic Puts Workers’ Lives in Danger

Workers need safety standards that will protect them during and after the pandemic. Allowing companies to speed up production lines doesn't allow for social distancing and risks lives. 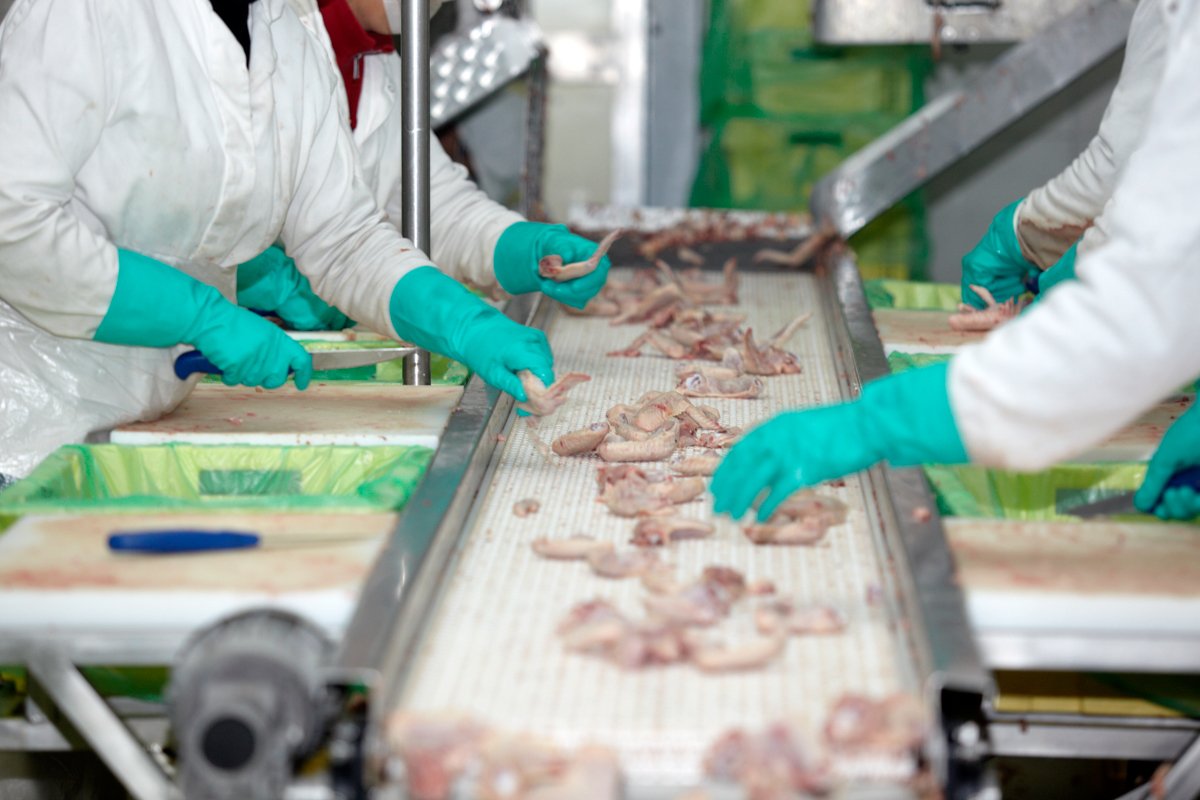 July 30, 2020 update: Advocacy groups Food and Water Watch and Venceremos today filed a complaint against Tyson Foods, alleging that the company’s advertising and marketing claims around the “safe work environment” for its employees mislead shoppers about the hazards and risks that meatpacking workers face every day.

In April, while COVID-19 continued to spread around the country, the lines at meat processing plants were moving at the speed of 140 birds per minute. Not only does this speed put workers in danger of injury, but it also puts them at risk of COVID-19 infection because it requires them to have to stand very close to one another.

Then, despite Centers for Disease Control and Prevention (CDC) recommendations for protecting meatpacking workers from COVID-19 using physical distancing, the U.S. Department of Agriculture’s (USDA) Food Safety and Inspection Service inexplicably gave approval to 15 poultry plants with already poor safety records to speed up their poultry processing lines even further.

Over half of the plants have had ongoing outbreaks of COVID-19, but the companies still sought to substantially increase their line speeds by 25 percent, to 175 birds per minute, which necessitates squeezing workers closer together on the lines and prevents proper social distancing.

COVID-19 has already infected at least 35,000 meatpacking workers and killed many. Raising line speeds further endangers the plant workers and their families and communities—and the Trump administration has done little to address this.

The consequences of increasing line speeds at any time, let alone during a global pandemic, fall not on the policymakers and plant owners responsible for this egregious decision, but on the plant workers—the community of Black, Latinx, immigrant, and refugee workers who make up the majority of the workforce in these facilities.

To protect these people, the plants should be slowing down their lines to allow physical distancing among workers. Unfortunately, this industry has a history of violating the basic human rights of its workers—by denying restroom breaks, failing to provide adequate personal protective equipment, and even reprimanding workers for warning co-workers about possible exposure during the pandemic.

For decades, the poultry industry has relied heavily on the underpaid labor of Black and brown workers to bolster their bottom lines, even as their revenues come at the expense of workers’ health, safety, and lives.

For decades, the poultry industry has relied heavily on the underpaid labor of Black and Brown workers to bolster their bottom lines, even if their astronomical revenue streams come at the expense of workers’ health, safety, and even lives. Oftentimes, when major poultry companies are cited for violating safety standards, the fines they pay are a small fraction of the true cost.

For example, several workers at a George’s Processing plant in Missouri suffered amputations in recent years, but the company only paid a little over $9,000 in penalties. That is an insignificant cost for a company that generates billions in revenue annually, let alone the fact that those workers must live with terrible injuries for the rest of their lives.

The four companies that received the USDA waivers in April—Tyson Foods, Wayne Farms, George’s Processing, and Mountaire Farms—not only have poor safety records, but their corporate history is also laden with workplace violations that include racial discrimination and other suppressive tactics like punishing workers for staying home when they’re sick.

Tyson Foods is the largest poultry slaughter and production company in the U.S., worth $21 billion. Yet, despite its wealth, the company does not use its fortune to sufficiently protect its labor force. In 2016, the company paid $1.6 million in a hiring discrimination settlement that alleged the company unfairly profiled thousands of women and people of color based on their sex, race, or ethnicity.

In the same year, the company was slapped with a $236,000 fine from the Occupational Safety and Health Administration (OSHA) for safety violations at a Texas plant that involved a worker losing a finger. However, despite these past cases, Tyson Foods received line speed waivers in April for processing facilities in six states.

Mountaire Farms, another recent waiver recipient (and the subject of a recent New Yorker exposé), has a past that includes racial and environmental injustices. The company’s Lumber Bridge, North Carolina plant had two separate settlements involving retaliation against Black workers for speaking out about racism on the job. But these allegations didn’t stop Mountaire Farms’ owner and chairman from donating to the campaign of a New Jersey congressional candidate who was rejected by the Republican National Committee for spreading white nationalist propaganda on social media.

Ensuring a safe and healthy workplace is the official duty of OSHA, but the federal agency still has not issued any mandatory protections to safeguard workers. Policymakers have begun to take action by proposing legislation to suspend line speed increases during the pandemic, and others have demanded that congressional leadership include line speed reform in the HEROES Act, next federal stimulus package. The AFL-CIO has also recently filed a suit requesting a court order (which was denied) to require OSHA to issue a safety standard for workers.

Despite these concentrated efforts, the Department of Labor has continued to refuse to issue any safety requirements that employers must implement to protect workers. Instead, the agency has only issued vague voluntary guidance that is not enforceable. And, just last month, Labor Secretary Eugene Scalia testified that OSHA has only issued one citation related to COVID-19.

Even in “normal” times, poultry workers have had to endure some of the most perilous job conditions in the country. The danger for them (and their families and communities) is even greater now.

How exactly the decision to allow some facilities to speed up the line was impacted by the poultry industry isn’t clear. But the National Chicken Council—a group whose member include some of the nation’s largest chicken producers—petitioned to get the line speed increased back in 2017.

As the COVID-19 crisis continues to sweep the nation, frontline workers—many of whom are women of color—have kept us fed, delivered our goods, and kept us safe while facing the risk of getting sick themselves. Even in “normal” times, poultry workers have had to endure some of the most perilous job conditions in the country. The danger for them (and their families and communities) is even greater now.

Workers need safety standards that will protect them during and after the pandemic, including whistleblower protections, required social distancing, masks, personal protection equipment (PPE), paid leave, multi-lingual safety training, and premium pay, to name just a few. Allowing companies to speed up production lines sends the exact opposite message.