Could a Detroit Experiment Unleash the Power of Urban Soil? 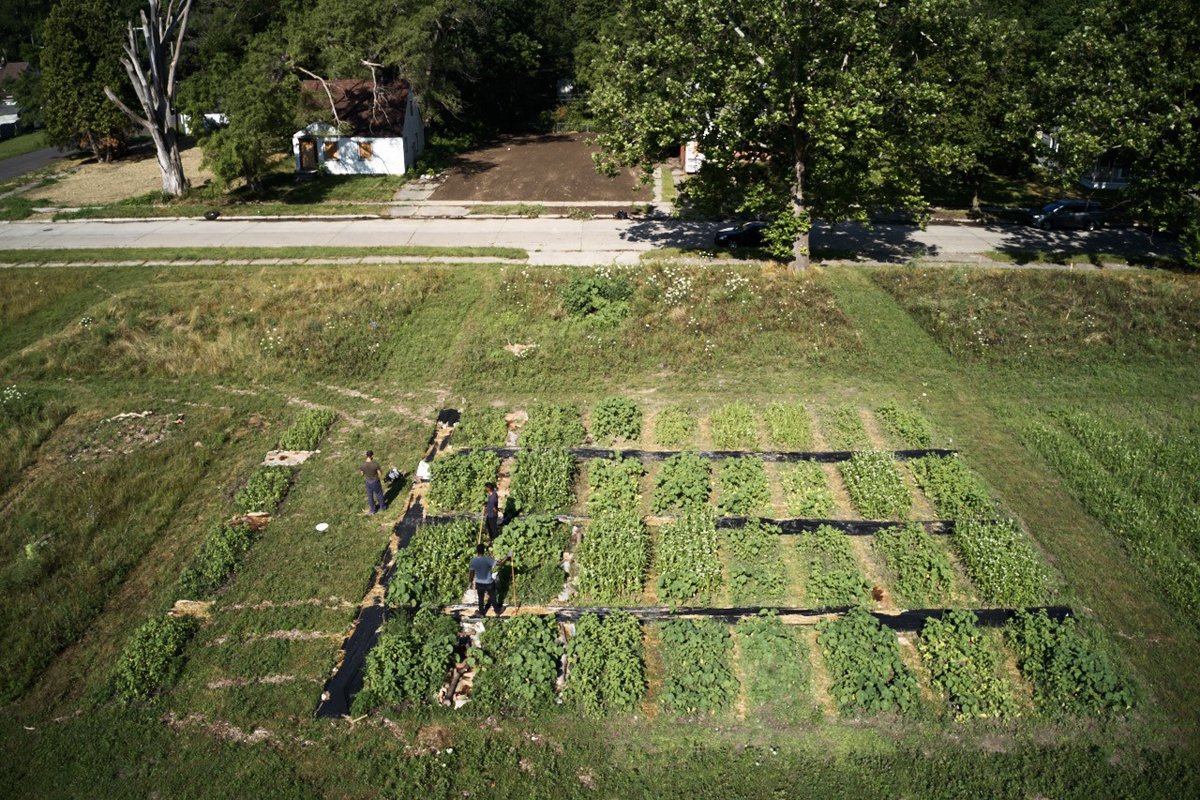 Over the past few months, the COVID-19 crisis has hit Detroit hard, resulting in more 12,000 cases and more than 1,500 deaths. It’s also produced an unemployment rate perhaps as high as 29 percent and a surging demand at area food banks.

These problems have brought renewed focus to the importance of food sovereignty in Detroit and elsewhere, and on a changing climate, which could make pandemics worse. Urban farming and gardening sit at the intersection of these issues—and offer a possible way forward, allowing communities to access healthy food close to home and possibly mitigate climate change by capturing carbon in soil.

Midway into its second season, a three-year study underway in Detroit has already created some promising results that could be a big step forward for urban agriculture. In the northwest corner of the city, Naim Edwards, director of the Michigan State University (MSU)-Detroit Partnership for Food Learning and Innovation, is leading a multi-year experiment to study the quickest, cheapest, and most environmentally sustainable ways to build urban soil.

On 36 ten-by-five-foot plots, the project is evaluating how cover crops, compost, tillage, and other forms of cultivation can work together to improve a piece of land. Researchers are measuring factors like soil organic matter, water infiltration, compaction, and weed abundance to see how they change over time.

Although the ground under cultivation is fairly typical of Detroit’s heavy, alkaline soils, it probably mirrors conditions in other cities as well. And while the study does not address outright contamination, some research has emerged showing that, at least when it comes to heavy metals, vegetables from contaminated soils are generally safe, although direct exposure to the dirt through dust or root crops remains a problem.

“My goal is in five to 10 years, to be able to push my fingers into this, which [now] is impossible,” Edwards says, indicating the ground beneath him. “You can barely push a knife it into this soil.” Tests at the site also show a pH of 8.1 to 8.4, which is high even by Detroit standards. A slightly acidic pH of 6.5 is ideal for most vegetables. 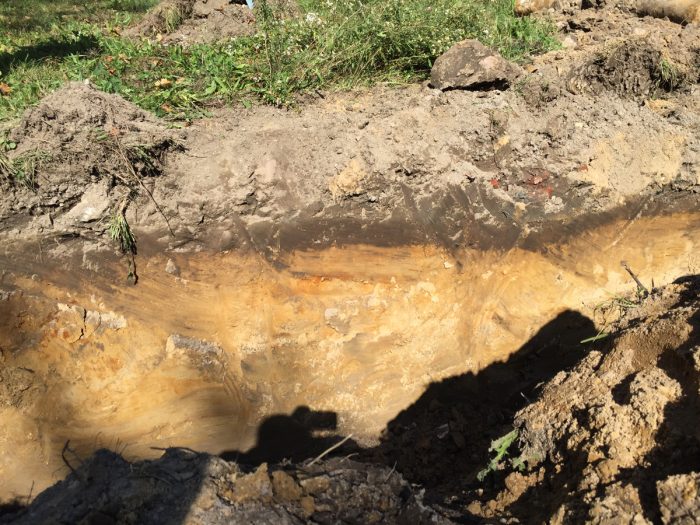 A profile of the soil at the farm plot.

Edwards received input on the project from a number of urban farms and community gardens in Detroit, including Brother Nature Produce, Earthworks Urban Farm, and the Georgia Street Community Collective. Many of these growers shared similar concerns about the alkalinity of urban soil—which is sometimes produced by concrete—as well as its compaction and the high cost of inputs like compost and organic fertilizers.

After the study’s first year, Edwards says he has made significant findings that can not only improve soils for agricultural purposes, but also for their capacity to absorb carbon and mitigate climate change in urban areas.

Jon Miller, who grows diversified vegetables on a small farm in Detroit’s core city neighborhood for the Grown in Detroit program, is one of a number of farmers who could benefit from the information generated by the  study. Soil on his farm is alkaline, which can decrease nutrient availability for plants. It also lacks organic matter, something that can influence everything from a soil’s ability to hold water to how easy it is for roots and other organisms to move through the ground. In general, a high level of soil organic matter is synonymous with plant health and can even buffer against a pH imbalance.

Miller says he’s put down around 60 yards of compost in his main growing space, but it hasn’t improved the quality of the soil much. He uses a roto-tiller and Gravely hand tractor to work the ground—but would consider investing in tractor tillage if the research justified it. He’s also interested in incorporating more cover crops into the operation.

“I’d like to know what would be most effective in terms of the mix,” he says, adding that he’s trying to find an economical way to take land out of production for short periods of time. “Could I sow cover crops… and get some benefit out of a short stretch?”

Also referred to as green manure, cover crops are plants such as clover, rye-grass, or hairy vetch that are grown to adding carbon and nitrogen to the soil, reduce weeds, and feed pollinators.  They also help build up organic matter as roots and foliage decompose. This non-mineral portion of soil—i.e., not sand, silt, or clay—is an important indicator of health, allowing the ground to hold onto water and nutrients. Additionally, cover crops offer another strategy for urban growers that are applying a large amount of compost.

The study incorporates cover crops on three-fourths of the plots to evaluate how well they loosen compaction, add organic matter, suppress weeds, and allow water to move through the soil, layering all of these factors on top of the various forms of tillage. And both Edwards and Richard K. Shaw, a professor at Brooklyn college and former soil scientist for the U.S. Department of Agriculture (USDA), believe there’s a lot of potential in using cover crops, a strategy that has sometimes been overlooked on urban farms.

“Almost all farmers are paying lots of money for compost,” Edwards says, explaining that farms often spend $5,000 to $10,000 a year on it. “Some of the longer running farms . . . are noticing imbalances in their soil and nutrients because of this practice of simply laying on a compost every year.” Problems can include excessive levels of phosphorous as well as calcium and magnesium.

These issues are one reason why Shaw tells urban growers that “growing in 100 percent compost isn’t the best way to go because you can have nutrient imbalances, you can have disease problems. It doesn’t offer great physical support.”

Edwards used several different cover-crop mixes whose deep roots or abundant foliage can be used to address compaction or smother weeds. During the first year of the experiment, Edwards found that a “weed-suppression mix” of grasses and broadleaf plants made up of sorghum sudangrass, cowpeas, and buckwheat created a lot of biomass and had few weeds, although the plants struggled to reach their full size in poor soil. 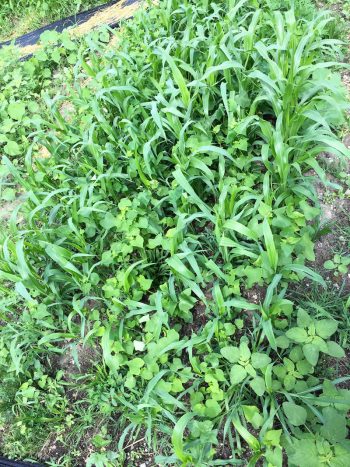 A weed suppression spot at the farm plot.

At the same time, oilseed or “tillage” radish—essentially a daikon radish bred to break up compacted dirt—rooted deeply in all the test plots and produced a lot of biomass, regardless of the tillage type or lack thereof. In this way, it works on a couple of levels, creating channels in the soil for the roots of next year’s crop, but also producing crucial organic matter.

Shaw had similar results with a short-term cover-cropping study. “We didn’t really expect to see a change after three years,” he says. “But after the first year, we actually saw a statistically significant decrease in bulk density in the surface because of the tillage radish, and to me, that was incredible.”

He believes that tillage radish could be a great option for breaking up compacted soils in urban areas, but adds, “it’s got some problems in that when it rots, it sort of stinks”—something that is perhaps not a minor issue when you’re growing food in a dense urban area.

Growers may have trouble working a radish crop into a crop rotation where they’re growing other brassicas, like cabbage, kale, or salad mix. Yet these complexities give support to the approach of the MSU project, which incorporates a range of treatments used in various combinations. “There’s such a wide breadth of gardeners and objectives,” Edwards says. With this in mind, he hopes to produce a flow chart that allows growers to cross-index their needs and perhaps financial resources with the data provided by MSU.

Various forms of tillage, from tractor-scale cultivation to hand-tools, are used to incorporate cover crops, make planting easier, or kill weeds. But they can also have drawbacks, like undermining soil structure.

The MSU experiment is evaluating several tillage regimens for most of the same criteria as they’re using for cover crops, although Edwards’ own observation of the copious amounts of debris pulled out of the ground has informed his findings as well. “I definitely have come to  believe that the best thing that you can do if you want to do in-ground production is till up the first year,” he says. “Tillage is just that first early opportunity to get all that stuff out of there before you put too much equity and energy into the land.”

Although tractor tillage can be difficult to implement in urban areas, Edwards was able to hire a local farmer to cultivate a third of the test plots—which included using a subsoiler, moldboard plow, and a tiller attachment —for $1,400. He believes even cheaper options exist in the city.

On the experimental plots, Edwards pulled a large amount of debris out of the ground. Even basic roto-tilling can remove some debris, he says. The plots where this was done drained water the fastest and were the only ones to decrease in compaction over the growing season when combined with cover crops.

It’s unclear how this will play out in the long-term. Frequent tillage can cause problems, especially in Detroit’s clay soils. Tillage can break down  aggregates—clumps of soil whose crumb structure allows roots and water to move through the ground—and compromise biology  by killing fungi and earthworms. It may also cause more compaction in the long term by destroying the aggregates that keep soil fluffy and creating the “hard pan” that’s formed when dirt is repeatedly tilled at a certain depth. At its worst, this creates a vicious cycle of needing ever more tillage to break up the compaction that the tillage itself is causing.

However, it’s possible the MSU project will find a sweet spot where a minimal amount of tillage can break up the ground enough to introduce compost and cover crops that in turn create long-term fertility with less disturbance.

Beyond Farming, the Benefits of Soil Health

MSU’s experiment could have a big impact on people’s ability to produce food in their own communities, especially growing in Detroit during the COVID crisis as residents look to find ways to stretch their food dollar and limit trips to the grocery store.

But the implications of the research in Detroit and elsewhere extend beyond urban farming. Edwards believes that cover cropping practices could be used on vacant Detroit lots that are currently being mowed by the city to sequester storm-water that has caused extreme flooding in recent years, likely a result of climate change. They might also be used to reduce the amount of weed species that contribute to high rates of allergies and asthma in the city.

Urban soils can also create a carbon sink to help absorb atmospheric CO2, an important strategy for addressing the climate crisis. “There’s a whole lot more carbon in urban soils than people originally thought,” Shaw says. Additionally, he says, there’s “three times as much carbon in soils as there is any above-ground vegetation, and there’s a whole lot more in soils then there is in the atmosphere.”

A paper by Shaw and others—which studied soil in New York and Paris—found that urban soils often stored more carbon than agricultural or even forested land. It’s unclear exactly how big of a difference urban soils could make in mitigating climate change, but Shaw says that things like ash, soot, and asphalt already contribute to high amounts of carbon storage, and he’s looking into how to increase this by using compost and biochar, a charcoal-like substance used as a soil amendment.

Edwards hopes that the project “recognizes and legitimizes urban agriculture” and gets Detroit away from the “Motor City paradigm.” And he hopes it could help policymakers see urban farms as part of larger soil management and greening strategies that help cities adapt to the era of climate change.

All photos courtesy of Naim Edwards.