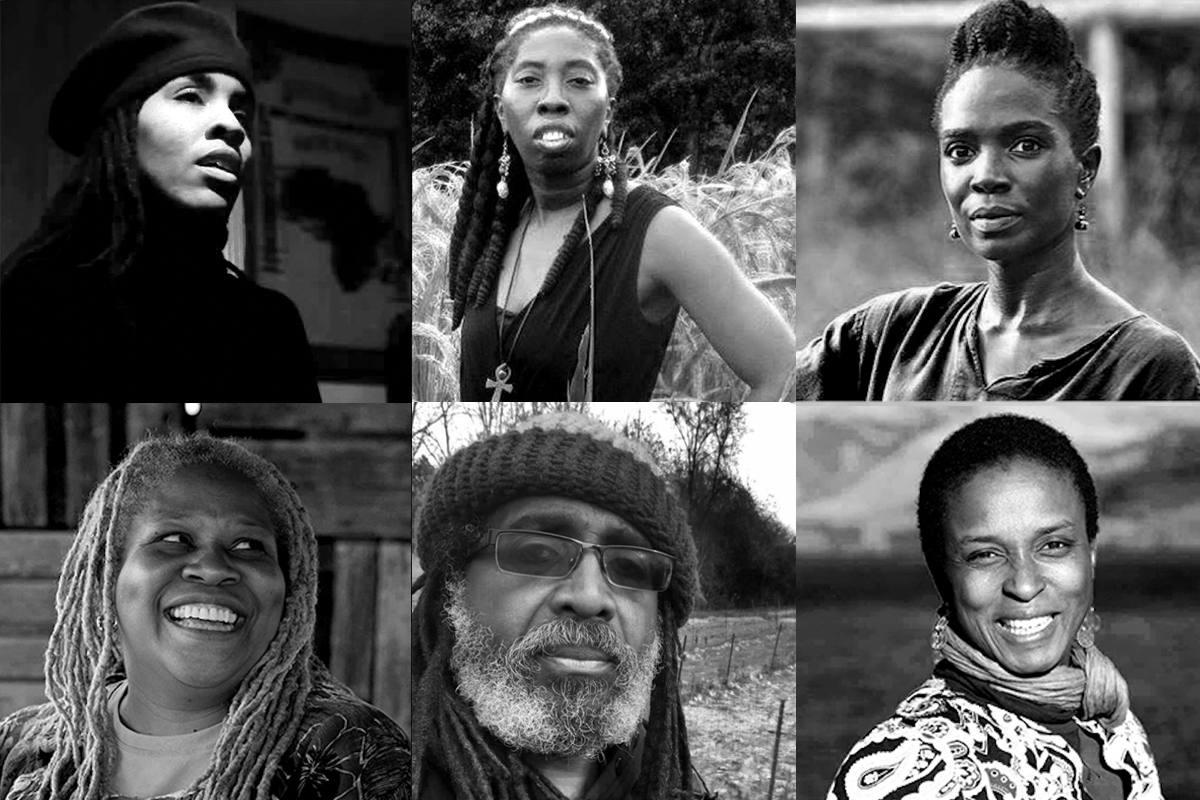 On June 19, or Juneteenth, more than 20 farmers, chefs, and good food advocates came together online for an intergenerational, cross-cultural discussion about Black and Brown voices and the fight for justice in the food system.

The event, part of a weekly live broadcast series, “A Hunger For Justice,” was initiated by Loren Cardeli, founder of A Growing Culture, a New York City-based organization that supports global farmer autonomy and agroecological advancement. And, at a time when much of the nation has been catalyzed by the killings of George Floyd, Breonna Taylor, Ahmaud Arbery, and countless other Black folks at the hands of the police, the conversation served as an important look at the evolution of the fight for food sovereignty, taking on a new sense of collective power and possibility.

Speakers told stories of generational land loss in America, Jamaica, Haiti, and Kenya, as well as tales of resistance, resilience, and the fight for land access. During the day-long conversation, thematic links, constants across generations, began to emerge as well the sense that current events and global shifts in consciousness could mean that long-fought-for change might at last be possible.

“Recent Black Lives Matter actions are a continuation of an ongoing fight for economic independence and land sovereignty that has been ongoing since the arrival of African slaves in America.”

“Much of the work we’ve been doing for years, now the ears of the people are open to it,” said Malik Yakini, co-founder and executive director of the Detroit Black Community Food Security Network and the Detroit People’s Food Co-op. “Both the COVID pandemic and the mass protests we’re seeing against police murder are causing people to look at Black food sovereignty in a much more favorable light.”

Sawdayah Kaliaha Brownlee, board president of the Brooklyn-Queens Land Trust, began the day by correcting common misconceptions on the origin and significance of Juneteenth. The most often heard explanation is that it celebrates the day in 1865—two-and-a-half years after the passage of the Emancipation Proclamation—when Union forces arrived in Galveston, Texas to inform a group of slaves there that they were freed.

However, Brownlee cited research by writer Ava Tiye Kinsey who has noted that many of those slaves, through their own communication networks, were already aware of the news and engaged in forms of organization, resistance, and uprisings. Many had already made their way north to “create all-Black infantries for the purpose of going South to free our people,” Brownlee said.

Those who joined all-Black military units, she added, did so with the goal of liberating their people. Recent Black Lives Matter actions, Brownlee said, are a continuation of an ongoing fight for economic independence and land sovereignty that has been ongoing since the arrival of African slaves in America.

Grounding today’s work in history, she added, “We have done this before, and we have the systems to make that happen again.”

“For me, food sovereignty starts with the saving of seeds, the cultivating of crops, and the telling of stories.”

Brownlee, whose family is Gullah—a group of people who began fighting for self-determination through food along the lower Atlantic coast—says the effort began with the seeds that they brought with them from Africa. “For me, [food sovereignty] starts with the saving of seeds, the cultivating of crops, and the telling of stories.”

Sheryll Durrant, food justice advocate and the resident manager for Kelly Street Garden in the Bronx, spoke of her Jamaican roots. She described her approach to food as a “direct result of [escaped slave Jamaican Maroon] guerillas living in the mountains, who were able to grow food for themselves … and defeat the British.”

Gathegu Cecelia Gatunga, an Atlanta urban gardener born and raised in Kenya, spoke of how British colonization “completely erased her people’s identity,” taking away language, foods, and customs. Post-independence, her family managed to grow everything they ate and found “healing through the land.” They imagined America as a place where the streets were paved with gold. Instead they found most grocery store food “a shocking and horrible experience” that began taking a toll on their health.

“Coming back to the soil” after college, she said, “really reactivated our ancestral DNA” and “brought me back to asking questions” about her pre-colonization ancestors, such as: “What did the plants around their house look like, what did dinner look like?”

Several speakers also described ups and downs in the struggle for food sovereignty. Yakini, whom many refer to as “Baba Malik” or “Father Malik” for his wise elder status in the community, recalled how Coleman Young, Detroit’s first Black mayor, encouraged farming in the 1960s, providing urban farmers with access to tractors and seeds, and gave rise to a network of community of gardens. Like many northern cities, Detroit was populated by families that had arrived from the south during the Great Migration of the 1920s, and many brought with them their skill for gardening.

But community organizer and urban agriculture activist Alexis Mena and Durrant both also spoke of the “food apartheid” that afflicts many communities of color. “[It] affects the health and wellness of the community, our ability to integrate into larger society, and disproportionately affects work, sleep, and how we see ourselves,” said Durrant.

In the South Bronx, one of the poorest congressional districts in the U.S., she added, “these effects were compounded by the ‘decade of fire,’” that destroyed 80 percent of the area’s housing. Yet those vacant lots, in turn became opportunities to reclaim land and grow food through project like the mostly volunteer-run, 2,500-square-foot Kelly Street Garden.

“Despite generations of trauma, we do not forego our connection to food,” said Durrant. “Even though we don’t own this land, we’re reclaiming it for our community to grow food on.”

Yakini spoke of the role of the Black church in establishing self-determination for its members, citing The Shrine of the Black Madonna in Detroit. The Reverend Dr. Heber Brown III, pastor of Pleasant Hope Baptist Church in Baltimore and founder of the Black Church Food Security Network, noted that many Black southern churches were established after Black farmers donated part of their lands to the cause, and recalled the tradition of “homecoming” in which transplanted northern Blacks would return to visit their families and churches and help them work the land.

Brown, whose program aggregates fresh food grown by small-scale Black farmers and sells it to food-insecure Baltimore residents, also payed tribute to Pastor Vernon Johns, who in addition to being known as a Civil Rights crusader, shocked his “high-cotton” Baptist congregation by wearing overalls and selling watermelon after services.

How Black farmers can gain access to land was also a recurring topic. Brownlee spoke about how the gardeners who moved to New York City from southern states or the Caribbean and claimed empty lots as their own banded together across boroughs to create the Brooklyn Queens Land Trust to safeguard space they had made viable and attractive to developers.

Mena advocated going back to Indigenous traditions of collective ownership. So did biracial Black and Indigenous farmer Chris Newman. On his Sylvanaqua Farms farm in Virginia, Newman, who believes that the small diversified farm is fatally flawed, says he’s going “straight-on anarchist, back to my Indigenous roots by combining the ethics of a lot of Latinx and African farmers.” Another key part of his model are the tall grass, food-producing ecosystems maintained by Native people, which, he says, “were so vast that outsiders didn’t realize they were on a giant farm.”

Brown delivered an eloquent call to take the idea of collective ownership or guardianship and “put it in the bosom of the Black church.” No other institution, he argued, can match “the institutional power base that has been around since the late 1700s and has the ability to withstand arson and assassination of its leaders … There’s a window of opportunity here now,” he explained. The Black church has the land, space, and means from which to drive a movement, Brown added. “You’ve got the keys to the bus and the kitchen,” he said, “let’s do it.”

The Role of the Black Chef

Chefs Mavis-Jay Sanders, Sicily Sierra and Jonny Rhodes described practicing mutual support within the circle of Black farmers, chefs, and other suppliers that they’ve actively cultivated. Sierra, an actor-turned-restaurateur who now co-runs Food Plus People, described her careful cultivation of an all-Black network in the restaurants she’s headed. “My first question is, ‘Are they Black?’ It affects who gets my business because it’s so important to honor every part of the Black food system: who’s growing it, who’s cooking it, how we are telling that story.”

In answer to a question about how she overcomes the generational trauma of cooking for other people, Sierra summed up her response to any misguided notions about her role: “Let’s keep it real. I’m nobody’s mammy, I’m the boss.”

“My first question is, ‘Are they Black?’ It affects who gets my business because it’s so important to honor every part of the Black food system: who’s growing it, who’s cooking it, how we are telling that story.”

Rhodes, chef-owner of Indigo in Houston, said he hopes to combat agricultural oppression by acquiring his own land. In discussing his plans to close his acclaimed restaurant in the coming months in order to start a farm and open a store, Rhodes pointed to the need for “not just having Black farmers, but Black farmers in multitudes!”

The last discussion of the day was a sure sign of how the culture has evolved in its ability to hear and understand calls for both land and reparations—how, as Yakini noted, the “ears of the people” are finally open to these messages. Amber Tamm, a Brooklyn farmer, floral designer, and horticulturalist, spoke of her vision to pay homage to Seneca Village, a mostly African American hamlet in New York City. Although half of the village’s residents owned the land they lived on, the city took control of the village in the mid-1800s through eminent domain and then razed it in order to create Central Park.

“We’re not settling, there’s no compromise. We’re going to call it out until there is systemic change.”

Tamm is now planning to ask Central Park to donate 14 acres of the park’s Great Lawn to be transformed into a farmer training program for Black and Brown teens. The food grown there, she says, will help feed—free of charge—the Black and Brown families that will be among the two million New Yorkers projected to be food insecure post-COVID 19. Tamm admitted that she has yet to contact Central Park about her plan, but her Gofundme campaign has already amassed $97,000 in donations.

As long-time activist and urban farmer Karen Washington—another respected elder—sees it, such a bold vision might not have seemed possible just a few years ago.

In a phone call after the event, Washington expressed gratitude for the Black Lives Matter movement and the younger generation that has taken up the cause she’s devoted much of her life to. “We’ve been fighting for so long now,” she said, “but it’s the young people who are saying, ‘Not on my watch.’” The feeling now is, “We’re not settling, there’s no compromise … We’re going to call it out until there is systemic change.”