Restaurants Are at the Mercy of Delivery Apps, but Can they Survive the Pandemic Without Them?

Just four delivery app companies control 98 percent of all restaurant sales, with sky-high commissions and fees. Restaurants that have shifted to delivery-only are seeking solutions. 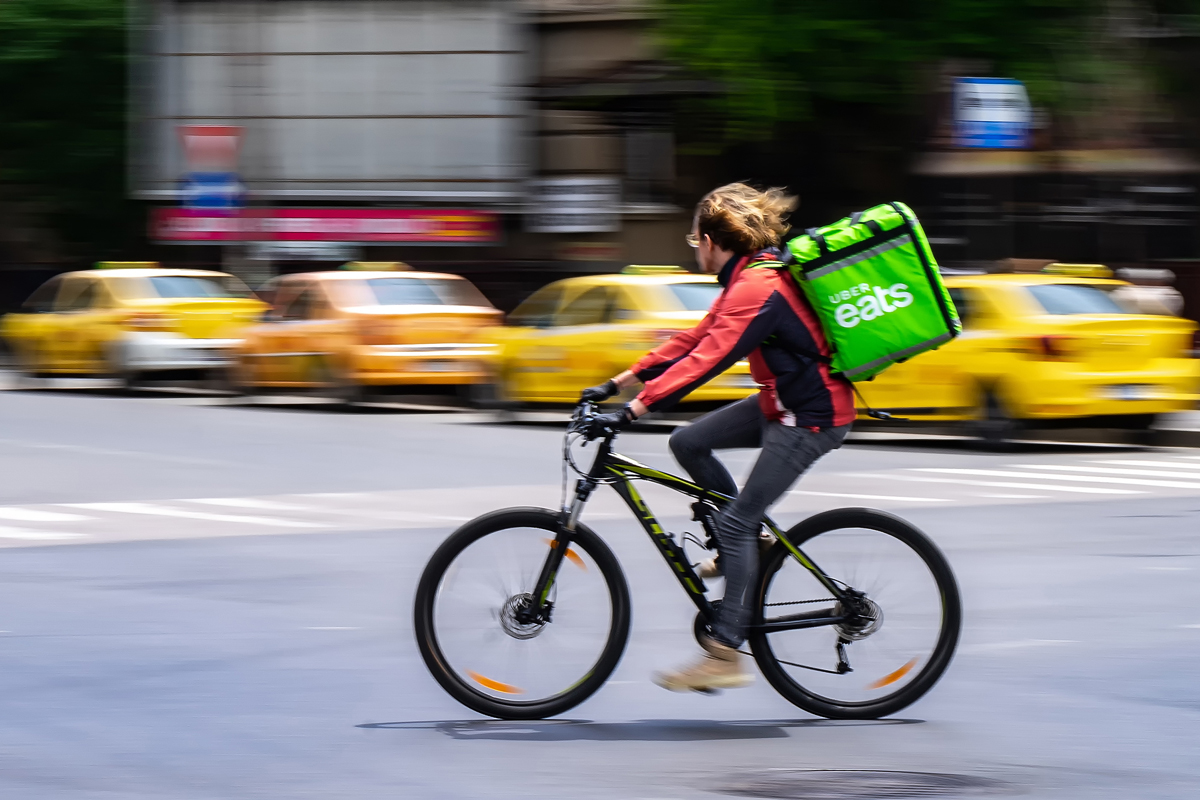 September 22, 2020 update: Three U.S. representatives today called for an investigation into the practices of Uber Eats, Grubhub, and other restaurant delivery apps, noting that ” these delivery platforms’ fee structures and questionable practices have made it hard or impossible for restaurants to remain profitable.”

June 30, 2020 update: Uber today made an offer to buy Postmates, a rival food-delivery app, weeks after its efforts bid to buy Grubhub fell through.

Abdelilah Souada stopped using Grubhub in February. After working with the delivery app on and off for over a decade, the owner of Pizza D’oro in Washington, D.C., says he had “had enough” of Grubhub’s rising commissions and fees. In the worst months, he says, he was paying the company as much as $10,000.

And then COVID-19 turned the restaurant industry upside down. Luckily, Souada already had delivery drivers on staff and just enough time to build up his online presence. “We suffered the first month, but we’re back in business again,” he says. “We’re doing whatever we can and we’re not going to let the big guys crush us.”

Unfortunately, this hasn’t been the case for most restaurants. Many major outlets have reported that restaurants reliant on delivery apps for business are collapsing under their commissions, which range from 15 percent and 40 percent, and can even reach as high as 60 percent of every order. “I don’t know how other places are doing it,” Souada says.

Some cities have responded by temporarily capping fees, but delivery apps claim this could end up taking money from couriers or increasing delivery costs for eaters. Most delivery apps undercharge on the actual delivery costs to expand their user base and then rely on fees to restaurants for profit. It’s a risky business model, and so far Grubhub is the only company that has turned a profit, despite unprecedented demand during the pandemic.

Experts say the end game for major food delivery apps is not to support restaurants, but to expand and create dominant platforms through which they can charge maximum service and marketing fees. Today, just four delivery apps control 98 percent of all sales; a recently abandoned merger between leaders Uber Eats and Grubhub could have consolidated their power, and the pressure they are able to put on restaurants, even further.

The pandemic reveals this exploitative relationship may be too much for many restaurants to bear. In response, some entrepreneurs are searching for alternative delivery models, and others are joining forces in a class action lawsuit to fight industry consolidation.

Before the pandemic, delivery apps were designed to offer a source of additional revenue for restaurants that didn’t offer delivery or weren’t reaching a large customer base. But even then, many restaurant owners complained of soaring fees and deceptive practices.

Grubhub, for instance, has been criticized for creating unique phone numbers for restaurants and charging as much as a $9 commission on all calls, even if they don’t result in orders. Sometimes, Grubhub’s numbers appear higher in Google search results than the restaurant’s actual number. Grubhub expanded this practice to websites as well, buying up as many as 23,000 restaurant domain names, drawing away traffic or entirely preventing restaurants from building their own sites. One Denver restaurant, Freshcraft, sued Grubhub last month for creating a website claiming Freshcraft doesn’t accept delivery orders; the restaurant does, just not through Grubhub.

Grubhub has been criticized for creating unique phone numbers for restaurants and charging as much as a $9 commission on all calls, even if they don’t result in orders.

Both Grubhub and DoorDash also scrape restaurant menus off the internet, offer delivery for restaurants without first securing their permission, and sometimes post incorrect offerings or prices. Restaurants can either request to be removed or start paying commissions for more control over their posted offerings.

And all of the top four delivery apps—DoorDash, Uber Eats, Grubhub, and Postmates—increasingly work with venture-capital backed “digital brands” like Reef Kitchens, which build low-overhead, food truck-style “ghost kitchens” in parking lots to produce food exclusively for delivery. In one instance, several delivery apps in a supposed “clerical error” listed the menu of a Reef ghost kitchen in San Francisco, “Happy Khao,” under the name Kin Khao, a neighboring Michelin-starred Thai restaurant that does not offer delivery. 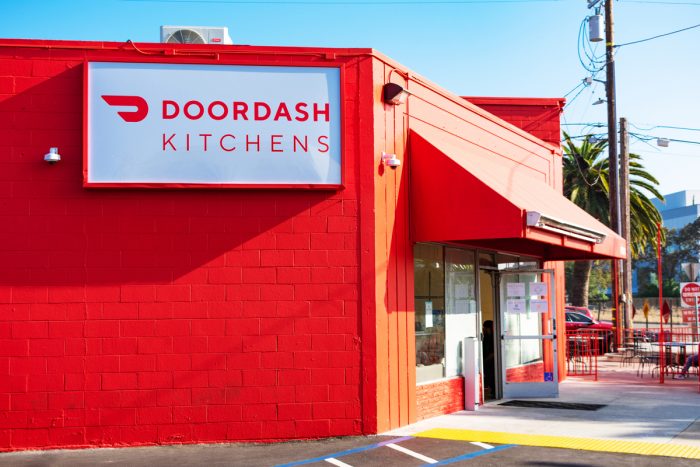 The complaints go on and on, from stories of costly unexplained refunds, misleading promotions, cold food, poor tech service, and of course, ballooning fees. This is all to say nothing of the plight of delivery app couriers, who have been sharing harrowing accounts of grueling routes, costly glitches, garnished tips, and boom-or-bust pay with no guaranteed minimum wage.

Maureen Tkacik, an author of a recent delivery app exposé for The Washington Post and fellow at the American Economic Liberties Project, argues that these subpar and exploitative relationships with restaurants, delivery workers, and app users suggest that these delivery apps’ have skewed priorities.

“There’s no way in which they do a good job—because they’re not trying to,” Tkacik says. “They’re trying to disrupt and monopolize the space.”

In many ways, the underlying business model of top delivery apps resembles other tech giants, like Amazon: Rely on hefty investor backing to fund below-cost delivery and buy up rivals, become ubiquitous, then make up losses by squeezing users for access to and visibility within your dominant platform. This includes charging steeper commissions as well as marketing fees for prime placement in search results.

For instance, Grubhub began to turn a profit by expanding its reach and charging higher fees particularly to smaller restaurants, which do not have the market power of national chains to negotiate a better deal.

A series of takeovers has shrunk the once-crowded field to just four dominant corporations with 98 percent of the market. Just last month, Uber Eats and Grubhub announced a possible merger that would have consolidated the sector even further, putting 55 percent of the industry in the hands of a single company.

Uber backed out of the deal, fearing antitrust scrutiny, although the corporation has signaled their intent to consolidate the food delivery space by other means. “Like ridesharing, the food delivery industry will need consolidation in order to reach its full potential for consumers and restaurants,” an Uber spokesperson told CNBC. Meanwhile, earlier this month, a Dutch food delivery conglomerate, Just Eat Takeaway, acquired Grubhub for $7.3 billion, showing that the race for delivery dominance is international in scope.

Top players already exert some regional control: DoorDash, which bought Caviar and Rickshaw, controls an estimated 64 percent of the San Francisco delivery market. UberEats controls 60 percent of Miami, and Grubhub, which took over Seamless, Tapingo, Eat24, and others, controls 53 percent of New York City. A recent class-action lawsuit alleges these regional fiefdoms are no accident, but the result of coordination between the companies to avoid each other’s turf.

Critically, dominant apps control access to massive customer bases and their data. Souada said it was hard for him to leave Grubhub’s network, even when he could not afford their fees, because he would lose access to the customers he gained through the platform. “They own customers’ email addresses, they have their phone numbers,” he said. “They will take them back and the restaurant owner will start from scratch again.”

“[The restaurant delivery app model] pits the worst aspects of American capitalism with what I think is one of the last bastions of competitive entrepreneurial spirit.”

“It’s a terrible relationship,” she says. “It pits the worst aspects of American capitalism with what I think is one of the last bastions of competitive entrepreneurial spirit.”

Delivery app corporations have made some attempts to support restaurants through the pandemic. Uber Eats temporarily waived sign-up fees, DoorDash did the same and cut their fees in half through the end of May, Postmates temporarily waived commission fees for businesses in select cities, and Grubhub has deferred some fees, but hasn’t waived any.

Civil Eats contacted all four delivery apps, but only DoorDash responded to a request for comment. A spokesperson said, “DoorDash knows that doing our part during this unprecedented time is vital, which is why we provided a robust package of an estimated $120 million in commission relief.”

The spokesperson also mentioned DoorDash’s new service, Storefront, which helps restaurants create delivery websites using DoorDash couriers for a flat monthly fee. The model resembles another startup, ChowNow, which sells itself as a restaurant-friendly alternative to the top delivery apps. In both models, restaurants control their sites and customer data and pay no commissions. It remains to be seen, however, how affordable these services’ monthly fees will be.

Souada used ChowNow to create his first delivery website for Pizza D’oro, but eventually decided to build his own website to avoid their fees. He ultimately wants to help other restaurants build in-house ordering and delivery systems and has even offered to share his delivery fleet with neighbors. He admits in-house delivery is not cheap or easy, but in the long run he says it can cost less than delivery app fees and gives restaurant owners more control.

Restaurants that do offer in-house delivery have urged customers to order directly during the pandemic. One California pizza company even sponsored an Instagram post decrying delivery apps’ commissions.

However, even for those restaurants that can overcome the hurdles and costs of bringing delivery in-house, there is still the issue of reaching customers. Delivery apps’ central platform is hard to beat, but some entrepreneurs, such as D.C. restaurant owner Josh Saltzman, are trying to build alternatives.

“We wanted to escape the trap of the UberEats and the Grubhubs of the world at our restaurant, Ivy and Coney,” says Saltzman, who also co-founded a regional food delivery app, D.C. To-GoGo. “We’ve been working to build a collaborative online ordering and delivery platform ever since,” he adds.

D.C. To-GoGo charges lower commissions ranging from 5 to 15 percent, depending on whether restaurants participate as pick-up only, use their own drivers, or use D.C. To-GoGo’s shared fleet, whose drivers receive a base pay of $18 an hour plus tips. The platform also gives restaurants more control to set delivery costs and terms, such as minimum orders and delivery windows (which could include ordering a day or more in advance).

The model does have its tradeoffs, however—especially for eaters expecting cheap and immediate delivery. As the app gets up and running, most restaurants currently participate as pick-up only and those that deliver have pre-scheduled and at times limited delivery windows. Saltzman also admits D.C. To-GoGo has higher average delivery costs than major apps, but says they reflect the full cost of delivery without relying on steep commissions or low wages.

D.C. To-GoGo has not turned a profit yet, but hopes to become self-sufficient and eventually recirculate its profits back to participating restaurants and hospitality industry charities. In the meantime, the enterprise is partially funded by a local commercial revitalization nonprofit, Shaw Main Streets.

“Everyone has ceded too much control to the Amazons and Ubers of the world,” Saltzman says. “It’s time we truly make our lives a little more local-oriented. Food and delivery is a great place to start.”