Through a collective maple sugaring effort, pop-up dinners, seed saving, and more, an urban community is reconnecting to its Indigenous foodways. 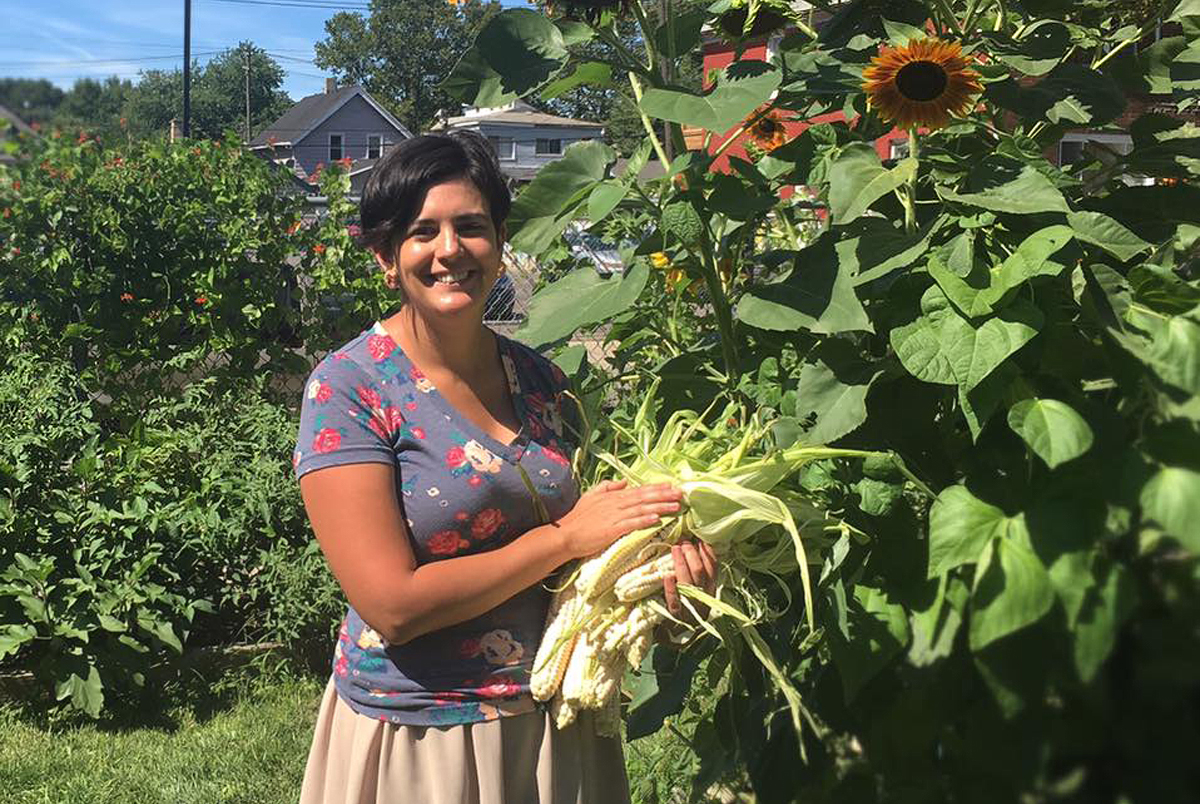 On a frigid mid-February Saturday, a small crowd gathers in a silent, snow-covered clearing in the woods. The atmosphere was more reminiscent of a far-off forest in northern Michigan than urban Detroit’s Rouge Park.

The group convenes around Jerry Jondreau, owner of Dynamite Hill Farms, who explains the Anishinaabe sugarbush tradition of tapping trees and boiling sap to create maple sugar and syrup. Jondreau, who learned the process from his family, shows the group how deep to drill into the trees, how to insert the tap so that it doesn’t harm the tree, and how to drill holes in the buckets that will collect the sap. 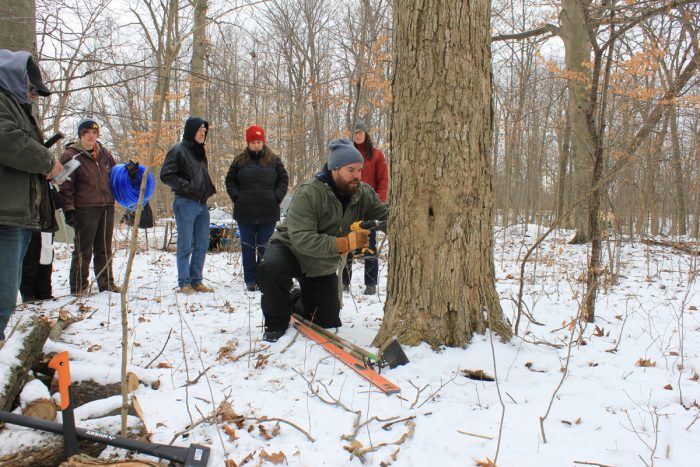 The Anishinaabe worldview involves seeing plants as having their own agency within the larger web of nature. “It’s acknowledging the inherent sovereignty of the trees themselves, because they’re living beings, too,” Jondreau says, while looking over the maple grove.

The demonstration was open to the public, and 15 to 20 people of diverse backgrounds showed up to learn how to tap trees. With Jondreau’s guidance, members of the group begin the tapping process. After collecting the sap, additional volunteers will learn how to boil it to produce maple syrup and maple sugar. Luckily, COVID-19 did not affect this year’s harvest because the first case in Michigan was not reported until a month after this demonstration, and since sugaring is mostly an outdoor activity, it can be accomplished in compliance with social distancing guidelines.

Jondreau is Ojibwe and lives in Michigan’s Upper Peninsula. He is a member of the Keweenaw Bay Indian Community and comes from a long line of sugar makers. At Dynamite Hill Farms, Jondreau and his family produce traditional Indigenous foods. “Since the inception of this country, nature has always been subjugated. We’re trying to peel that stuff back and get back to the things that made this place so beautiful and healthy,” he says.

Antonio Cosme invited Jondreau to Rouge Park to conduct an opening ceremony and to introduce maple sugaring to Detroit residents. He says this year was the pilot run to see if a sugarbush would work in Rouge Park.

Cosme grew up in the working-class, Latinx neighborhood of Southwest Detroit and runs the National Wildlife Federation’s D-LEEP program, which provides outdoor experiences and ecological education to Detroit youth.

Cosme connected with Anishinaabe people in the region as an undergrad at Eastern Michigan University and learned that many issues his community faces also affect the Anishinaabe. “Those same structures that were economically pressing my community were also subjugating the land and nature,” he says.

Cosme founded Southwest Grows, an urban farm and arts and ecology center, to help beautify his neighborhood and increase Detroiters’ access to green spaces and healthy food. He eventually connected with David Pitawanakwat, founder of the Detroit Indigenous Peoples Alliance (DIPA). About 2,500 people in Detroit and 47,000 in Southeast Michigan identify as Native American, and Cosme and Pitawanakwat worked together on several initiatives for Detroit’s Indigenous community before deciding to bring sugaring to Rouge Park.

“To me, it’s bigger than being Indigenous—these are just good practices, learning how to grow your own food, where food is from, how to process food.”

Pitawanakwat is Anishinaabe from Wiikwemkoong Unceded Territory, located on Manitoulin Island in Lake Huron, Ontario. He and Cosme obtained the blessing of local Anishinaabe elders before introducing sugaring to a broader group of people.

“I’ve gotten some pushback about bringing these traditions, and not just food traditions, to the broader public. But to me, it’s bigger than being Indigenous,” Pitawanakwat says. “These are just good practices. They’re sustainable—learning how to grow your own food, learning where food is from, learning how to process food.”

Cosme and Pitawanakwat needed support from the local community and permission from the city to tap and boil at Rouge Park. At nearly 1,200 acres, Rouge Park is the largest park in Detroit and is about 40 percent larger than New York City’s Central Park. The park sits on the city’s far west side, near the city of Dearborn.

Several organizations contributed to the multi-step sugarbush effort, and the Sierra Club contributed funding to bring Jondreau to Detroit. Kirsten Kirby-Shoote, an Indigenous food activist, chef, and urban farmer, was one of about 30 volunteers who helped at Rouge Park during the following weeks. Kirby-Shoote is Tlingit and originally from Oregon. She has lived in the Detroit area for more than four years and has a garden in nearby Pontiac, where she grows Indigenous crops. 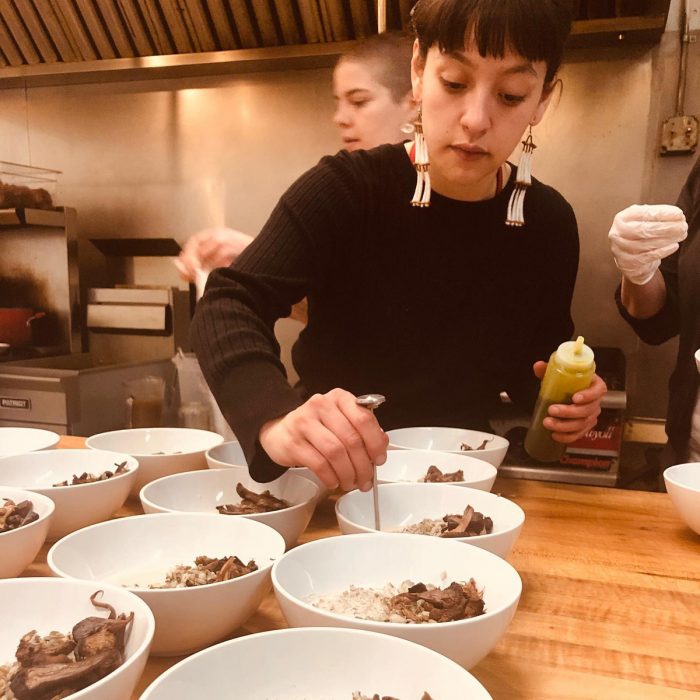 Kirby-Shoote says it is important for Indigenous communities to have access to their traditional foods to maintain good health and retain their cultures. “Our communities are ravaged by diabetes, obesity, heart diseases. You can put a Native on a diet, but if that spiritual element isn’t there, if that cultural backing isn’t there, it’s not going to have longevity,” she says.

Nationally, Native Americans die from heart disease, chronic liver disease, and diabetes at higher rates than other Americans. In the Detroit area, American Indian and Alaska Native people have more than double the mortality rate for vascular disease and diabetes than non-Hispanic whites. These health conditions increase the risk for serious illness and death from COVID-19.

For Jondreau, the collective sugaring effort is symbolic of the larger value of collaboration in reconnecting to Indigenous foodways. “You need people gathering sap, chopping wood, feeding this fire. You need people cooking, so that people can eat,” Jondreau says. “It naturally creates a community and a relationship between people, but also to the land.”

“What happens especially when you center food, is it brings everyone together because that’s one thing that everyone has to do. Everybody has to eat,” Jondreau says. “If you want to continue making your own food, you got to take care of this place. If this all burns down or falls down and gets sick, then you can’t sugar out here.”

Sustainable practices like sugaring, foraging, and traditional food preparation could also improve the lives of the more than 300,000 people who are food insecure in Wayne County.

“COVID-19 has brought many food-related issues to the forefront of people’s mind, possibly for the first time,” says Shiloh Maples, program manager for Food Sovereignty & Wellness Initiatives at American Indian Health & Family Services (AIHFS), in Detroit, where she and her co-workers see clients from over 200 Indigenous nations.

“More people are seeing how social inequities, health disparities, and food insecurity are intertwined. Furthermore, people are realizing how broken the larger, industrial food system is and are being inspired to grow some of their own food again or for the first time in their life,” says Maples.

Kirby-Shoote cooks for the local Indigenous community, but she also cooks Indigenous dinners for broader audiences at pop-up restaurants. In March, she and fellow Indigenous chef Camren Stott cooked an Indigenous cuisine of the Great Lakes dinner at Revolver in Detroit. Initially, there was to be one seating of 40 diners, but it sold out quickly, so Kirby-Shoote and Stott agreed to a second seating. 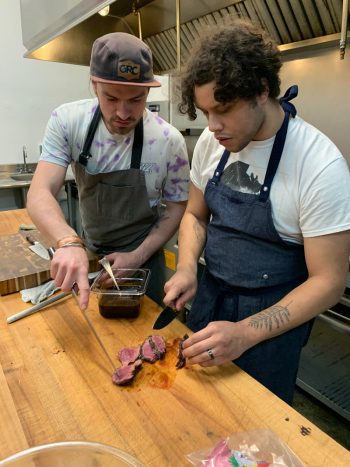 Coronavirus hit Detroit right before the event. Restaurants were not closed, but nearly half the diners cancelled at the last minute. Kirby-Shoote says, “It was a very special evening for the folks who did make it out. The reception was so good that they invited us back.”

When large gatherings are allowed again, Kirby-Shoote will continue to prioritize serving the Indigenous community. But she says the pop-up dinners help expose a greater audience to Detroit’s Indigenous roots.

“The city of Detroit is kind of a strange place, because there’s a very deep Native history,” Pitawanakwat says. “This has been a gathering spot for many different tribal nations for well over 1,000 years, but that history is largely hidden.”

Those nations included the Miami, Meskwaki, Wyandot, and Anishinaabe, a confederacy of the Ojibwe, Odawa, and Pottawatomi nations. In the Treaty of Detroit of 1807, leaders of the three Anishinaabe nations and the Wyandot nation ceded Southeast Michigan, including Detroit, to the United States. Although Indian removal policies caused most Indigenous people to leave Detroit, they never completely left.

AIHFS’s Maples says urban Indian relocation programs of the 1950s brought tens of thousands of Native Americans from reservations to Detroit and other urban centers over the following decades.

“Indigenous communities are often invisible to the larger society or are spoken of in the past tense, but we are still here.”

“Indigenous communities are often invisible to the larger society or are spoken of in the past tense, but we are still here,” Maples says.

Maples is Ojibwe and Odawa and has lived in Michigan her entire life. She manages AIHFS’s Sacred Roots, a food sovereignty program that strives to reconnect people to ancestral foods and the land. Before the pandemic, it did that through a seed garden, seed library, cooking classes with Anishinaabemowin language lessons, group outings, and seasonal celebrations, among other things.

“Although our program comes from an Indigenous perspective; we invite everyone into our space,” says Maples. “All of us come from land-based people and practices if we go back far enough.” 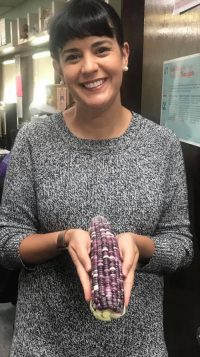 AIHFS has suspended its programing or moved it to virtual platforms in response to COVID-19. But, Maples says, “Indigenous peoples have always been very creative, resourceful, and resilient. Together, we are facilitating the exchange of heritage seeds via mail, helping people figure out safe ways to access resources, and brainstorm how to overcome the challenges they are facing.”

As difficult as this time is, Maples sees a seed of an opportunity. “We can redefine our relationships to land, food, and each other,” she adds.

Cosme and volunteers tapped 60 trees and were able to finish harvesting sap and most of the boiling before COVID-19 struck. They produced 12 gallons of syrup and another 2 gallons that they will use to make sugar. They have begun in the process of giving the sugar and syrup to elders and Indigenous organizations.

“Next year, we’re hoping to collaborate more with local nonprofits and tribes to expand the programming,” Cosme says. “It’s vital that this work directly benefit and include [more] local Anishinaabe peoples and urban Indigenous people.”

Top photo: Shiloh Maples in the Sacred Roots garden holding Walpole Island flint corn. Some of the seed will be saved for the seed library and some will be used in food processing workshops. (Photo courtesy of Shiloh Maples)

Jeff Burtka is a Metro Detroit-based freelance reporter. You can read more of his work on his website. Read more >