The new documentary—and a city-wide public art project—addresses redlining, income inequality, and structural racism through the lens of food. 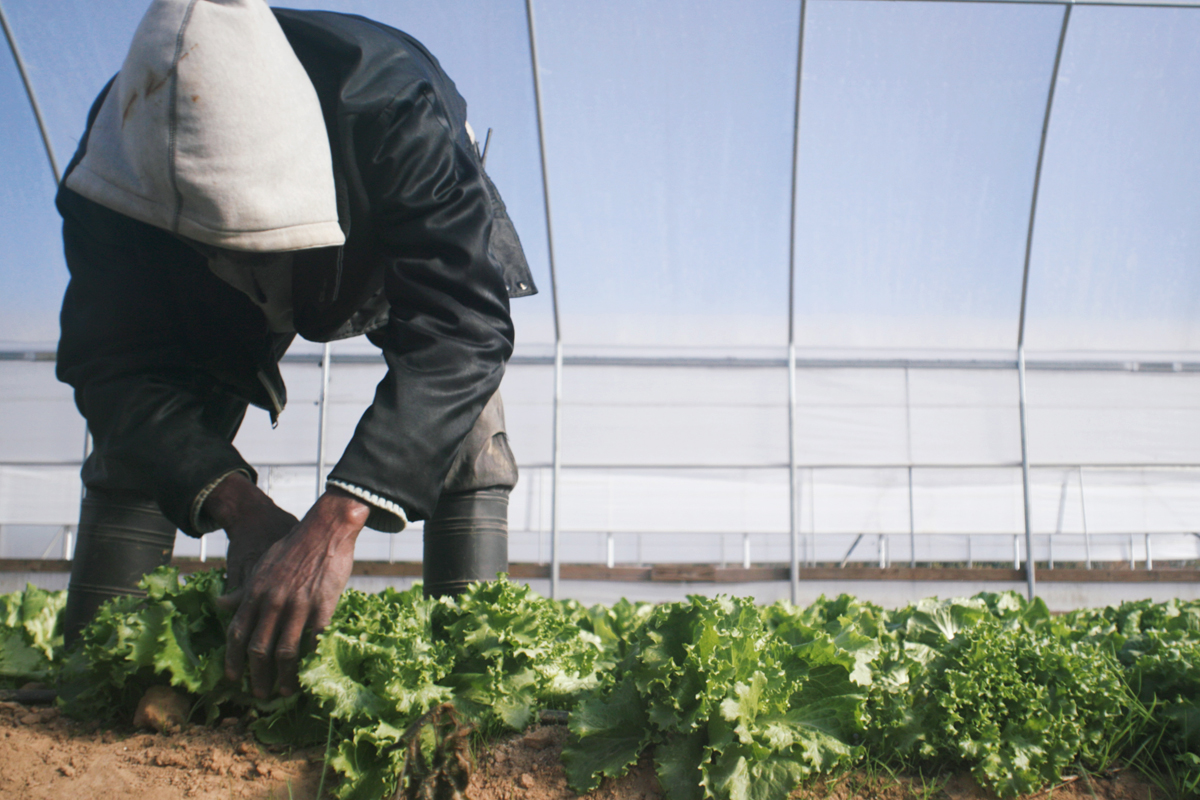 Mississippi has the dubious distinction of ranking high nationally in each of these interlinked categories. With the exception of New Mexico, the Magnolia State is the most food insecure place in the country, according to the U.S. Department of Agriculture. The short documentary Fertile Ground chronicles the fight for food equality in the capital city of Jackson and the efforts of activists, farmers, lawmakers, and other advocates to make healthy food accessible to all residents. The film, directed by Alex Warren, with executive producer Robby Piantanida, airs tonight at 7 p.m. Central Time on Mississippi PBS and is also available online at PBS.org.

“There is no justification for anyone to go hungry or anyone to not have access to healthy food options,” Jackson Mayor Chokwe Antar Lumumba said in a statement about the film. “In many respects, food is love in our communities. Food is a reflection of how we demonstrate our appreciation for people.”

Fertile Ground, which was funded in part by a grant from the Bloomberg Foundation, shows how historic redlining—a practice in which banks prevented people of color from buying mortgages in white neighborhoods—resulted in the mostly Black and impoverished neighborhood of South Jackson having few grocery stores but several convenience stores with low-quality food. The city’s car culture and lack of sidewalks and bicycle lanes add to the problem, making it a herculean task for residents without vehicles to obtain nutrient-rich food. And children in Jackson’s most economically disadvantaged areas rely on school cafeterias to get balanced meals. In Mississippi, 1 in 4 children experiences hunger, compared to 1 in 5 adults.

In the wake of these challenges, urban farms, city planning projects, farm-to-table restaurants, and efforts to provide residents with locally grown food offer hope that food equality in Jackson is possible. Fertile Ground isn’t just a film, but an initiative that aims to shape policy and public dialogue about food access and nutrition through art, workshops, panel discussions, and other events.

How does the layout of Jackson contribute to food inequality? 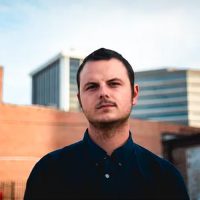 Travis Crabtree: Whenever you have a city that is extremely car oriented, obviously you have accessibility issues, especially when you have neighborhoods that don’t have good public transportation, low car ownership, and no sidewalks—which is the reality for a lot of Jackson. Jackson started being built from the core, which is downtown Jackson, and then over time, you had white flight and people started to leave the city.  That’s when all the grocery stores left.

It’s a very typical pattern in American cities. It has happened all over the country, but Jackson is a place that’s already dealing with extreme poverty, racial tensions, and [less] access to resources. When it comes to food insecurity, it’s super exacerbated here.

The documentary discusses how poverty in some Jackson neighborhoods played a role in supermarkets leaving. Why do you think that is? 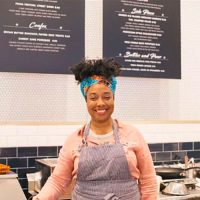 Enrika Williams: You can find plenty of convenience stores that have decided to take EBT because people in the community who are using food assistance need a place to spend their money so they can eat. But the larger grocery store chains are in the business of making money, and capitalists are not empathetic to anything but . . . making money. So, if the majority of the people who come into your stores are on some sort of public assistance, you look at the bottom line and think, “I’m not making any money.”

I also think there’s a stigma attached to public assistance recipients. Stores don’t want to appear to be accommodating to a demographic of EBT recipients. There’s also an insurance standpoint: It costs more to put your grocery store in a low-income neighborhood. It’s like another form of redlining.

How does the history of redlining play a role in the city’s present-day food landscape?

Crabtree: It’s really clear what lines divide Jackson—the train yard, the interstate, and these other sorts of urban barriers, even institutions like colleges or hospitals. They act as really large barriers that are disconnecting the white neighborhoods from Black neighborhoods. And generally the white neighborhoods are the ones that have the grocery stores and are more affluent.

Redlining obviously exists in most American cities, but it’s so apparent here. One thing that we’ve done outside of the documentary is we have a major public art component. We’ve tried to position our public art installations at the intersections of the redlines to bring the two communities together. We’re putting them right up against the railroad tracks and the different sort of segregation points to try to have conversations about what an integrated Jackson would be like.

Crabtree: In Jackson, you do have people who have historically farmed, but there isn’t a terribly large number of urban farms in Jackson yet. If you compare it to Detroit, which is where I spent a lot of time researching, Detroit has over 1,000 urban farms. Jackson has about 20, but we’re really trying to start that movement and grow it as much as possible, train more Black entrepreneur farmers, and get people to start producing food.

Jackson is extremely dependent on outside food sources, and we’re trying to be a little more self-sufficient and create more of a localized food economy and circulate our food from within the city, where the farmers are working with restaurants, chefs, and grocery stores.

“Out of lack, you create resources, you grow the things you need.”

Williams: Whenever I hear the term urban farming, it always makes me laugh because I’m like, “What part of Mississippi is considered urban?” But I get it. I do think urban gardening and farming are happening, but a lot of it has been under the radar. I personally know people who have their victory gardens and their own little plots of land.

Out of lack, you create resources, you grow the things you need. We have to grow food and vegetables to sustain ourselves and our communities. With the quarantine, people have started to realize that in order to sustain ourselves, we are going to have to be more responsible about the food that we eat, and we’re going to have to grow it. Foot Print Farms here in Jackson is one of the most brilliant ideals of what farming is.

Fertile Ground also discusses the possibility of more people relying on farmers’ markets for food. Is this trend already happening?

Williams: The farmers’ markets accept EBT, WIC, and SNAP benefits to encourage healthier eating, and because of the COVID situation, farmers’ markets have just exploded in popularity. People are looking for fruit, vegetables, meat, and eggs and things. But a lot of the farmers, especially Indigenous and Black farmers, don’t own their land, they leased it. And small farmers can’t compete with big farms when it comes to pricing. They can’t afford to grow products and sell them for as cheap as their corporate competitors do when they’re trying to sustain themselves and survive.

Crabtree: I think that you’re seeing restaurants working with farmers a lot more, too. There’s a slow shift in thinking—if you’re not a restaurant that’s supporting a local farmer, then you’re not being innovative. There’s sort of a standard being set by certain restaurants. The more they talk about their support of local farmers, the more people are really catching on and want to support their businesses for doing that.

I will say that this whole economic situation around COVID makes me worried about farmers and restaurants, because farmers’ price points are a little bit higher, and these restaurants have to pay their workers right now. And they can’t really afford to pay 15 to 20 percent more for local produce when they have a tight budget.

What are your thoughts on the Jackson children who rely on schools for balanced meals?

Williams: A lot of the school food is extremely processed. And that’s really, really unfortunate. We have a Mississippi Farm to School Network that tries to get fresh produce into schools. They’re doing a pretty good job with that, but we can definitely be doing better. We’re building a large-scale learning garden at one elementary school and currently trying to integrate an edible curriculum [focused] on growing fruits and vegetables. 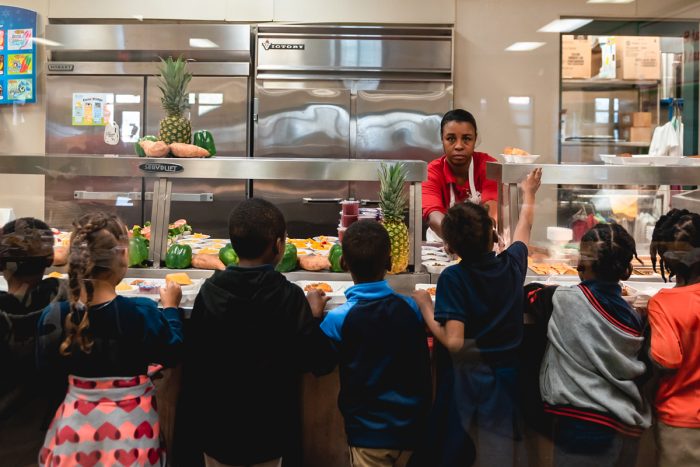 Crabtree: We’ve actually created the curriculum and designed this garden. It is supposed to be extremely sustainable, and we’re trying to work with the teachers to integrate those things into the classroom. Ultimately, what needs to happen within the school is a closer connection to growing food and creating the next generation of entrepreneurs who can really provide food for their communities. So, ideally, we would love to see farms at school. In Jackson, most every school is on eight acres of land, if not more.

What should our readers know before they watch the documentary?

Williams: In Jackson, we’re working hard and advocating and implementing changes for food equality. We’re not just sitting around and making documentaries about our city to show how dismal things are. We’re out here doing the work.

“We’ve done something really innovative here, and Mississippi is not a place known for innovation.”

Crabtree: I would add that it’s pretty unprecedented what we’ve done with the Fertile Ground Project and the documentary as far as bringing together an interdisciplinary group to work within the food space. The people who are part of the project are urban designers, chefs, artists, farmers, and food policy advocates. We worked with so many different people to discuss the problems with food access and food insecurity, to really get a full view and understanding of what the issue is and what the solutions are.

We’ve done something really innovative here, and Mississippi is not a place known for innovation.

This interview was edited for length and clarity. All photos courtesy of Fertile Ground.

Watch the Fertile Ground trailer below, and stream it on PBS.org: