An under-the-radar market has sprung up to prevent euthanizing pigs and help support farmers. But communities on the receiving end have limited processing capacity and big concerns. 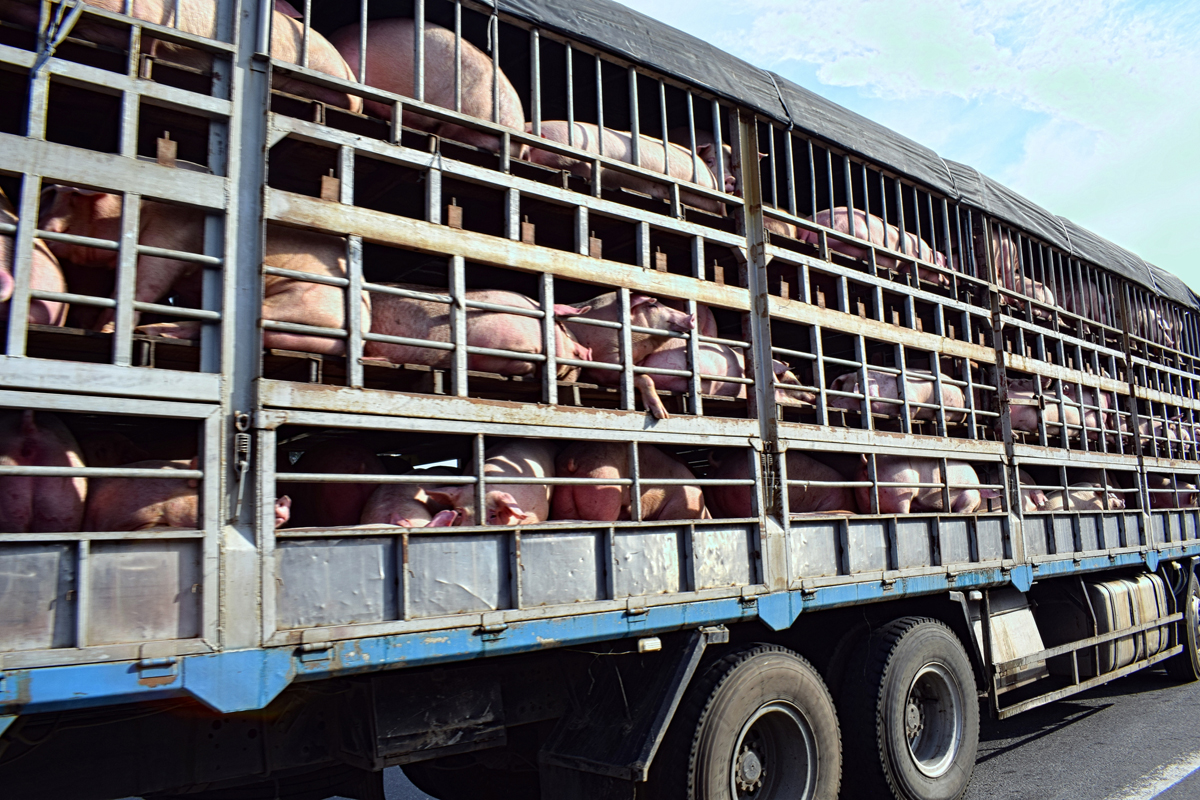 In mid-May, an ad in the Northwest Livestock & Equipment Classifieds Facebook group featured a photo of four pink pigs huddled together in Junction City, Oregon. “Butcher ready pork from the Midwest. We are bringing them out to help keep them from being euthanized and put in the landfills,” read the ad. In the comments below, a number of enthusiastic people expressed interest in buying the animals.

This was just one of many such ads that have been posted online over the past two months. And the sellers represent one piece of an under-the-radar, direct-to-consumer pork supply chain that has emerged to connect commodity hog farmers in the Midwest to new buyers across the country.

According to the U.S. Department of Agriculture (USDA), commercial pork production was down 10 percent in April, compared to last year. Coronavirus outbreaks have caused closures and slowdowns at the biggest processing plants owned by meatpackers like Tyson, Smithfield, and JBS, leaving farmers in states such as Iowa, South Dakota, and Ohio with thousands of hogs they’ve been unable to sell.

The USDA has offered to help farmers euthanize and dispose of the animals, but little in the way of other assistance. In Iowa, which is home to nearly one-third of the nation’s hogs, the Department of Agriculture, Iowa Pork Producers Association, and Iowa State University created a coordination center that provides resources that include tips for slowing the growth of hogs, euthanasia, and disposal, and alternate sales channels.

There’s also a growing effort to help process meat for local food banks, and get whole and half animals directly to consumers. But the infrastructure is limited, and the few meat lockers in the state have been overwhelmed with demand.

For these reasons, many farmers are finding themselves desperate to sell their animals, even if it means transporting them long distances and getting less than they cost to raise.

“Euthanization is absolutely, absolutely my last resort. It’s something I do not want to do,” said Minnesota farmer Chad Lubben, who was left with 1,600 market-ready hogs when his local JBS plant closed at the end of April. (It reopened on May 6, but is currently operating at a reduced capacity.) “It’s just a waste . . . and plus, the devastation.”

As a result, hogs raised on farms in the Midwest are ending up in Oregon and a number of other far-flung states. And some local residents, farmers, and agencies in those places are concerned about this new, improvised supply chain. Some hogs are ending up in communities where meatpacking plants are overwhelmed and nearby farmers are already having trouble getting their animals processed. And sales are taking place outside of normal channels, prompting concerns about whether regulations that prevent the spread of disease and ensure food safety are being followed.

When Lubben posted an ad for his hogs online, he says, “It went viral, and I got a lot of interest.” For a while, he says he was getting about 80 phone calls a day. So far, he’s sold about half of the 1,600 hogs that were ready to market, mainly to individuals who show up at the farm and buy a few at a time. He sold one larger load to a woman taking them to Idaho in a semi truck.

Lubben said he needs to get $150 per hog to break even on the cost of raising and feeding the animals, but he’s selling them for $80 each in an effort to get them out as quickly as possible. “Eighty is better than zero, right?” he reasoned. Euthanization and disposal also comes with costs, although the USDA provides some assistance on that front. In Iowa, the Department of Agriculture also announced last week that it had launched a disposal assistance program for producers.

Because farmers like Lubben appear to be selling and shipping their animals on the fly, it’s difficult to quantify how widespread the practice is. In West Virginia, as of May 18, farmer Zach Teter had sold 500 hogs from Iowa and South Dakota to local residents with the help of West Virginia University’s extension service. One farmer told the Des Moines Register his cousin had sold thousands to buyers in Montana, Arkansas, and West Virginia.

South Dakota-based farmers Brian and Cohrene Mehlhaf have had their story covered in multiple farm industry publications. According to Tri-State Livestock News, the couple has three barns that each hold 2,400 pigs. When processing at their local Tyson was dramatically reduced, they posted on Facebook and received an influx of interest from buyers all over the country.

“As of April 30, they’d sold between 3,000 and 3,500, with pigs going as far as Maryland, Georgia, New York, and Washington. [Mehlhaf] figured nearly 1,000 head had gone to Wyoming alone,” Tri-State Livestock News reported. When Civil Eats reached Mehlhaf over the phone on May 21, he said he was busy “dropping pigs in Idaho.”

While Lubben said the family has a processing contract with JBS, they have heard little from the company. The shutdown was communicated in an email, he said, and he didn’t know when they’d be back at capacity or be able to take their hogs again.

Unlike in poultry farming, where the meatpackers own the birds and pay the farmers to raise them, many contract hog farmers own the animals they raise or raise them for other farmers. The hogs still have to be grown according to the meatpackers’ specific standards, but in a case like this, the financial burden of a hog with no market falls on the farmer.

How are the meatpackers themselves helping farmers?

A spokesperson for JBS told Civil Eats that the company briefly converted the Worthington plant to “provide producers with a humane euthanasia option for market hogs, but reopened the facility to provide producers a more viable option for their livestock.”

“We are partnering with all of our contract suppliers to process their hogs. To “ensure equitable treatment while our plants are not running at full capacity,” the spokesperson said the company was using pre-COVID ratios to determine how many of a suppliers’ hogs would be processed. In other words, if a farmers’ hogs constituted 2 percent of the plant’s processing when it was at full capacity, it would still be given 2 percent of whatever capacity the plant is running at now.

When asked what it was doing to help producers deal with hogs that could not be processed, a Tyson spokesperson directed Civil Eats to the National Pork Producers Council (NPCC). NPCC has been busy advocating for legislative relief for hog farmers, in the form of compensation for euthanized animals, direct payments to farmers, and mental health assistance.

Selling hogs through alternative channels “isn’t a solution to the supply bottleneck challenge faced by pork producers” because “local butchers and other alternative channels simply cannot absorb the number of hogs backed up,” Rachel Gantz, the communications director at NPCC, told Civil Eats. She added that the company is urging the Senate to adopt companion legislation that includes the livestock agriculture measures included in the recently-passed HEROES Act to help cover the cost of euthanizing the animals. “Without this and other assistance, thousands of pork producers will be forced to liquidate their farms and other assets,” Gantz said.

After the Hogs Arrive

The under-the-radar nature of all this hog transport makes it difficult to track. For example, Washington’s Columbia River Ranch recently began advertising hogs from Iowa, which would be processed at Matt’s Custom Meats. Spencer Drew, who said he handles direct sales to customers for Columbia River Ranch, said that his department had sold about 30 of the hogs so far. “We have been able to provide these hogs a home so that they aren’t wasted,” he said. But Drew added that he didn’t know exactly how the hogs had made it to Washington.

The improvised nature of these sales has made state agencies issue strongly worded reminders of their regulations. A few weeks ago, the Washington State Department of Agriculture (WSDA) issued a news release, estimating that 4,000 imported pigs had been sold statewide since late March.

While Columbia River Ranch was selling them direct to processing, the WSDA noted that others were selling to “would-be or inexperienced backyard farmers,” and the nature of commercial swine breeds and their previous diet could lead to animal welfare issues if individuals tried to raise the pigs on pasture. The agency also expressed concern about the fact that some of the pigs could be carrying diseases that are new to Washington’s very small pork industry.

“In some of these instances, the dealers have not followed our animal importation laws, and this raises concerns about disease transmission and animal welfare,” Dr. Amber Itle, assistant state veterinarian, said in the release.

In Oregon, hogs have also been sold without the proper paperwork. On May 22, the Oregon Department of Agriculture (ODA) joined Washington in issuing a news release. “These are hogs we cannot track and that leads to serious concerns about this new swine population, which could carry diseases that don’t exist in the state,” said state veterinarian Brad LeaMaster. “An unknown outbreak could wipe out our swine industry.”

Farmer Sarah Ballini-Ross is especially concerned about the spread of disease from Midwest hogs that are not going straight to slaughterhouses. She owns a small livestock farm in Scio, Oregon that includes pastured pigs.

“If every wanna-be backyard pig farmer has now bought three or four of these pigs, there’s the possibility for the spread of really serious diseases, and some are zoonotic [i.e., they can spread to people],” she said. (Lubben, for one, said he assumed the pigs he was selling were going directly to slaughter facilities, which would mean they didn’t need veterinary health certificates to cross state lines.)

Although demand is up for local meat, Ballini-Ross is struggling to get her animals processed on time. One of her processors, Revel Meat Co. in Canby, Oregon, typically processes animals from small and mid-size farms for local markets, but was so overwhelmed it stopped servicing smaller producers and is booked through the end of the year, according to owner Ben Meyer.

Meyer said that as more hogs are brought in, the question of where people will get them slaughtered is an important one. “[They’re] stealing capacity away from folks here who need it,” Meyer said.

“The lack of processing capacity is a huge issue,” said Mike Guebert, another Oregon farmer who produces pasture-raised meat, milk, and eggs on 10 acres and has been fighting to make sure he has enough slaughter time slots to maintain his meat CSA.

Guebert and others also worry about the stress that a 30-hour journey from Iowa has. “I don’t know about how the industry moves animals . . . but they’re not stopping to feed and water them, I’m certain,” he said.

Still, Guebert sympathized with the farmers’ choice between figuring out a way to get the animals to people and the meager and often traumatic options the system they’ve depended on is offering them. Many agencies and organizations, including the Iowa Pork Producers Association, are raising alarm bells about the mental health risks associated with euthanizing animals.

“I get it. I mean, these producers . . . have all these pigs that they can’t get processed,” he said, explaining that he sees it as a symptom of larger challenges associated with the consolidation of the meat industry. “I don’t know what the right answer is right now.”