Undocumented Restaurant Workers Have Held the Industry Together. Now They Stand to Lose the Most. | Civil Eats

Undocumented Restaurant Workers Have Held the Industry Together. Now They Stand to Lose the Most.

Long working in invisible positions, and at risk for coronavirus and deportation, the undocumented often hesitate to seek support. 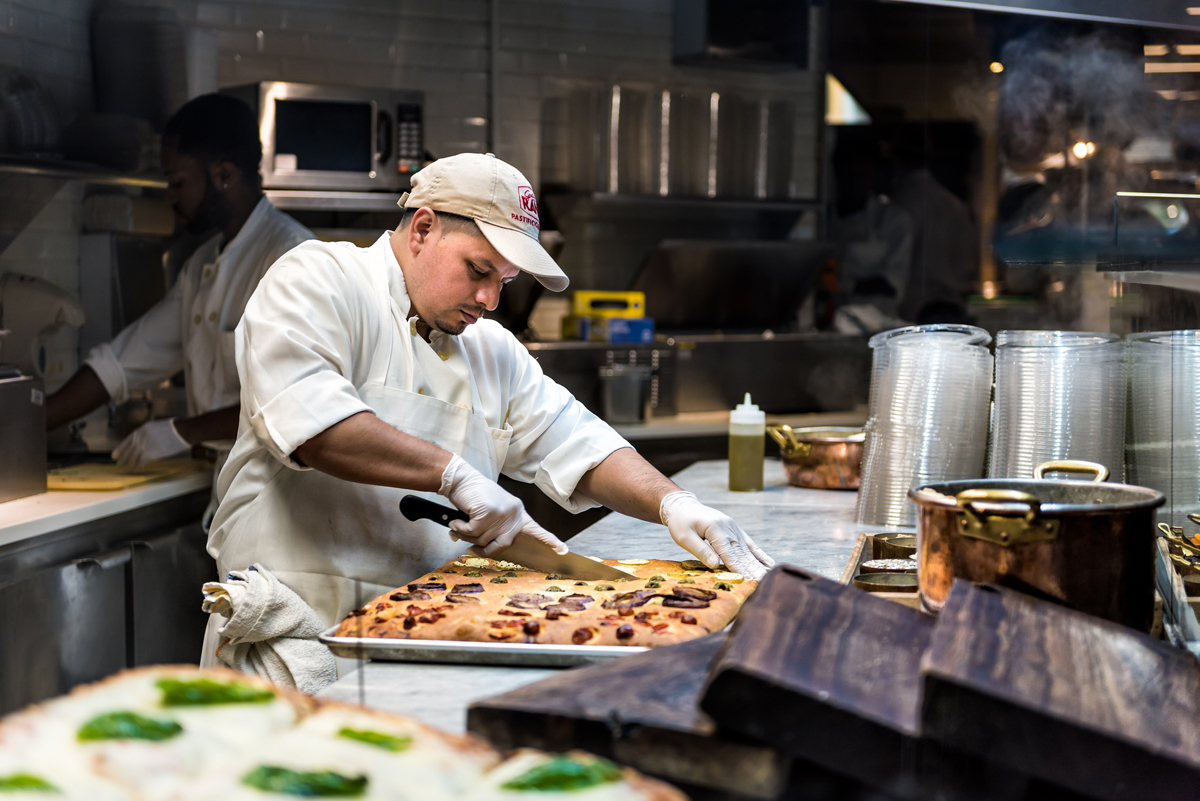 Prior to the pandemic, Reyes delivered food and washed dishes for a restaurant in New York City. Now, with the restaurant reduced to serving take-out, he’s mainly just doing deliveries and, as a result, making less than half the income he used to.

Originally from Teopantlán in Puebla, Mexico, Reyes is undocumented, but he pays taxes through one of the many untraceable, individual taxpayer identification numbers (ITIN) that the IRS has issued to people in hopes of creating a paper trail of their contributions to the government. Two years ago, this wasn’t possible, since he was getting paid cash, under the table, before he and his co-workers organized and filed a complaint with the Department of Labor.

He says he worries for himself, but also for all of his undocumented peers, who are more susceptible to exploitation than other restaurant workers. They face an array of challenges as a result of the increasingly dangerous combination of restaurant closures and Trump’s immigration policies. Undocumented people are also some of the most susceptible to infection by COVID-19, since many live in close quarters and multi-family dwellings.

“[Working at the restaurant] is hard because I have had to do some of the most difficult jobs that others don’t want to do. I had to clean up sewage that the restaurant is supposed to hire external services to do. But I fear losing my job, so I accept it,” he said.

The amount of work he’s offered has also been inconsistent. The restaurant owner promises him work, only to wait days before calling him back in. “That’s the strategy he’s been using to terrorize us with losing our jobs,” he says.

Since the pandemic first struck the U.S., over 8 million restaurant workers have lost jobs.

Though New York City has created a $20 million fund to disburse cash payments of $400 ($1,000 for families) for up to 20,000 immigrants with both legal and non-legal status, that’s a drop in the bucket for the half-million undocumented people living in the city.

Reyes is just one of millions across the country who face similarly impossible predicaments. Three months since the pandemic first struck the U.S., over 8 million restaurant workers have lost employment—including 5.5 million workers in April alone. A large number of these newly unemployed workers are undocumented. The undocumented comprise 10 percent of all restaurant employees in the U.S., and as many as 40 percent in urban areas such as Los Angeles and New York.

Undocumented immigrants as a whole pay billions in taxes and a higher effective tax rate average than the top 1 percent of taxpayers (8 percent versus 5.4 percent).

And, as they often work in the back of house—as line cooks, bussers, dishwashers, and janitors—they’re largely invisible to the dining public. In reality, they’re the backbone of the industry. And yet, many are unable to obtain health insurance even though they perform backbreaking work day after day. Most didn’t receive a $1,200 stimulus check from the government, and they often fear getting tested for COVID-19 or obtaining care for fear of deportation.

And although several organizations—new and old—are working to provide financial and logistical support for these workers, they’re facing language barriers, privacy, concerns, and a host of other challenges.

“The restaurant industry often employs very vulnerable sectors of the population: seniors, women, people of color, the undocumented,” says Manuel Villaneuva, lead organizer for the Los Angeles chapter of Restaurant Opportunities Centers (ROC) United. “Some employers know first-hand the vulnerability of the employees. And they often exploit them, commit wage theft, and let them know psychologically that they’re replaceable.”

In California, Governor Gavin Newsom has initiated a public-private partnership to disseminate $125 million in disaster relief. Of the total amount, $75 million is allocated to the undocumented, out of work because of the pandemic and ineligible for stimulus checks and unemployment. The other $50 million, the California Immigrant Resilience Fund, is in direct aid to especially vulnerable communities, including the disabled. But when phone lines opened up early earlier this month, they became completely backlogged, ultimately crashing for many on hold.

Comunidades Indigenas en Liderazgo (CIELO), an organization dedicated to Indigenous language rights, is one of the nonprofit organizations that has received $200,000 of the CIRF to give $400 checks to 500 Indigenous, undocumented families from Latin America for financial relief. Of those, 50 percent work or used to work in restaurants.

“Undocumented migrants undergo a huge problem because they’re pushed out by their home country, escape here, and then [they] are criminalized,” says Odilia Romero, co-founder and executive director of CIELO. “Then, the pandemic happened. They’re at the bottom and the least likely to obtain any support.”

One worker who has applied for funds through CIELO is Federico, a former dishwasher at a Downtown Los Angeles restaurant. Originally from Oaxaca, Mexico, he and his wife, from Puebla, have lived in L.A. for over 30 years and have four children who are U.S. citizens, the eldest of whom is 26. Since being laid off, Federico has found a job sewing masks.

“Undocumented migrants are pushed out by their home country, escape here, and then [they] are criminalized.”

“The money is nothing compared to what I made at the restaurant because we get paid by the piece,” he told Civil Eats. “We are paid either 5 cents or 10 cents apiece. In order to make $40/day I have to make 800 masks,” he explains. His family is fortunately able to get the food they need through the Supplemental Nutrition Assistance Program (SNAP).

There are many nonprofits dedicated to restaurant worker relief aid, but the majority fail to specify whether they are inclusive of undocumented workers for fear of political polarization jeopardizing contributions. And for workers, supplying personal information in order to qualify for aid brings anxiety about being tracked by ICE.

“We are pretty scared,” admits Federico. “It’s a constant feeling, but we have kids so we always try to take care of ourselves so we can provide a better life for them. We are aware of our status so we try to just … live with being undocumented.”

Another obstacle to accessing financial support is linguistic. While many support organizations do have Spanish-speaking employees, many who have emigrated from Mexico or Central America aren’t fluent in Spanish.

Stephen Murray, a Los Angeles chef who organized a Gofundme campaign for 38 undocumented workers with LA Kitchen Migrants, explains, “There are multiple Zapotec [Indigenous people from Oaxaca] kitchen workers who don’t even speak Spanish, let alone English. The same goes for workers from Guatemala, whom we have a lot of in L.A. It’s a huge barrier for them to find help.” 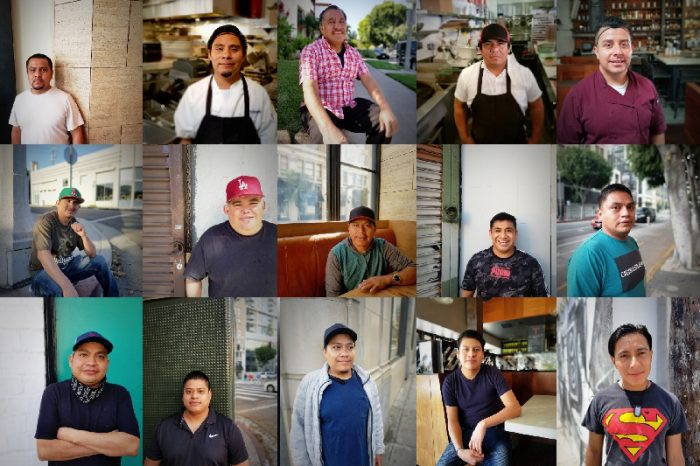 Damian Diaz, of Va’La Hospitality, a bar consultancy group, co-founded No Us Without You, a new nonprofit group in Los Angeles that runs a food pantry program supplying packages of food that feeds a family of four for one week. Diaz personally reaches out to each applicant in Spanish and asks them to fill out an easy questionnaire online.

“Every single individual has my direct phone number and I tell them, ‘If you have someone in need who fits the bill, give them my number.’ Once I get the completed questionnaire, they’re on queue,” Diaz said. So far, the group assists 350 families a week and it has no intention of capping the number.

Another Round Another Rally (ARAR) is another nonprofit that was launched by bar professionals dedicated to assisting out-of-work hospitality workers, with the goal of disbursing at least 50 percent of the funds they raise (in $500 payments) to Spanish speakers. It’s funded by spirits companies and foundations, with Campari Group alone donating $1 million to their cause (other donors include Patron, Aperol, Tito’s Vodka, and Ketel One).

Catherine Rosseel, a Boston-based volunteer coordinator, says that at the beginning of the campaign, there were 1,500 English-speaking applicants, but only 100 were Spanish-speaking—a difference she attributes to a reluctance to share personal information on the part of undocumented folks.

“I had four of my [bilingual] friends volunteering to talk to these people. We took down the barrier of [requiring] the application online so people felt safe, but realized it wasn’t efficient because people were too scared to give out their information and the conversations went too long. The calls just kept coming, so we had to regroup,” Rosseel says.

Fortunately, a group of bilingual Stanford MBA students reached out, spurred by a class assignment to help a specific community during the pandemic. Together with ARAR, they came up with a more streamlined application process that involves SMS prompts and rapport with native Spanish speakers, among other tools.

“Just hearing that voice makes them a little bit more comfortable, and to feel like this is real, and not some kind of scam,” says Claudio Gonzalez, a first-year, Stanford MBA candidate.

Actually getting the funds to people hasn’t been easy. No Us Without You and ARAR have both had difficulties maintaining contact with applicants. There are no-shows and calls gone unanswered. “A lot of these families had cars initially,” Diaz said. “But they’ve had to sell their cars to make some type of money. Also, they might have stopped having phone service because they can’t pay their bill, so there’s a lot of [talking over] Whatsapp in order to make reservations and appointments.”

The pandemic has left the country’s most vulnerable with nowhere to turn, and also exposed the reality of razor-thin margins in the restaurant industry.

The pandemic has left the country’s most vulnerable with nowhere to turn, but it has also exposed the reality of razor-thin margins in the restaurant industry, and just how often these businesses rely on the labor of undocumented, “essential” workers who are often treated as disposable.

And as restaurants stay closed or reopen at 25 percent or 50 percent capacity, the future could be even more bleak.

Like many advocates, ROC United’s Villaneuva wants to see undocumented workers given wage replacement and rent forgiveness. But in the long term, he says, the only way out of this conundrum is to provide these workers with a path toward citizenship—a change that some say would be net a positive for our GDP and reduce our deficit.

“We need to revise the immigration system where people can qualify by showing they’ve been working, paying taxes, and they’ve not been a burden on the government,” he says, adding that the current rule requiring people to leave the U.S. to apply for citizenship often puts families in especially precarious positions.

“The process needs to be sped up and made it simpler, so they don’t have to gamble with whether they can come back or not,” says Villaneuva.

Some names of individuals in this story have been shortened to protect their identity.