In Vermont, and across New England, the dairy industry is coming together to support struggling farmers and hungry families. 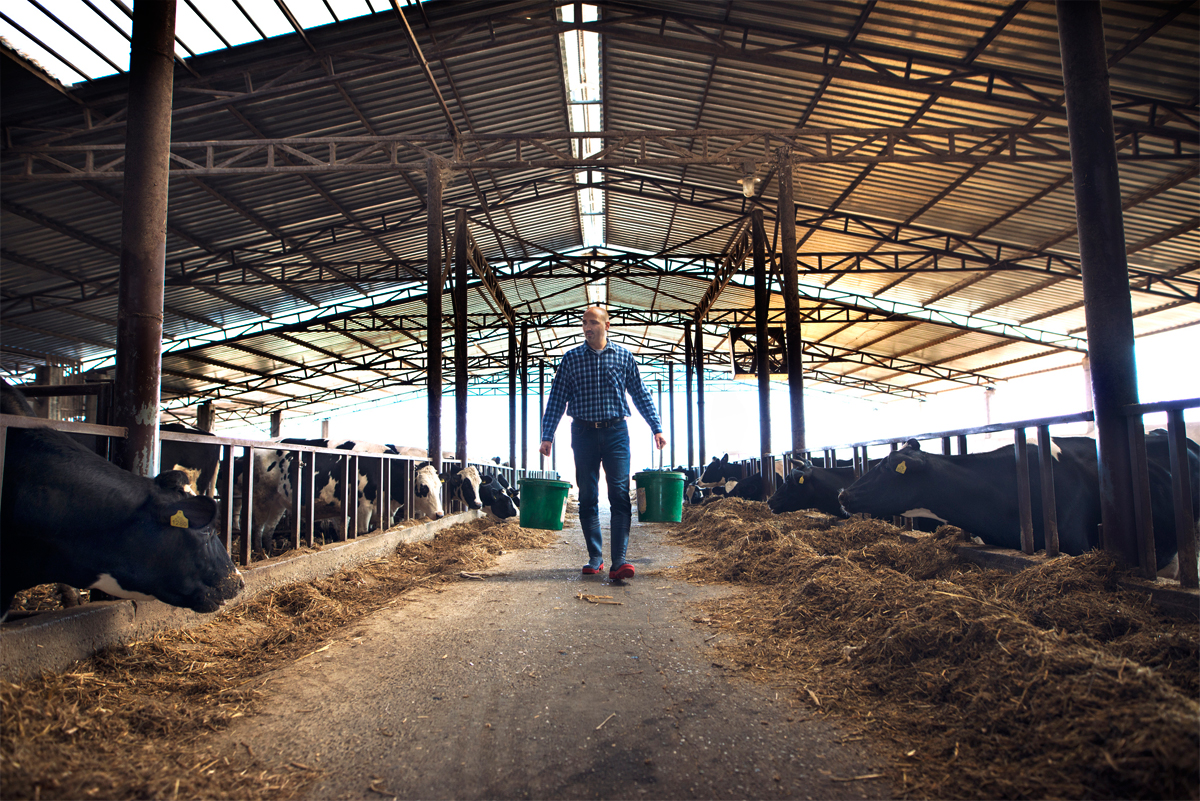 In April, Vermont dairy farmer Rebecca Howrigan watched the price for milk plummet 30 percent as the shutdown in markets for restaurants and institutions created a glut in supply. It crushed her hopes that 2020 would be the year she’d finally see decent prices, be able to pay some bills, and make on-farm investments. If that wasn’t bad enough, the cooperative that buys her milk, St. Albans Cooperative Creamery, asked her to cut production by 15 percent—something her 101-year old, fourth-generation family farm has never done.

Luckily, Howrigan didn’t have to dump her milk, as other dairy farmers around the country have had to do. That’s largely because dairy industry stakeholders in Vermont quickly came together on a collaborative initiative to recover farmers’ raw milk and process it into gallon jugs of milk, yogurt cups, and butter for the Vermont Foodbank.

Coordinated by the Vermont Agency of Agriculture, Food, and Markets, the collaboration includes Dairy Farmers of America (DFA), the nation’s largest dairy cooperative; three processors, Green Mountain Creamery, HP Hood, and Ploughgate Creamery; and several nonprofits, including the Vermont Community Foundation, New England Dairy, and the Vermont Foodbank. It’s one example of how dairy industry partners are coming together in New England to help both struggling farmers and families in urgent need of food assistance.

A $60,000 grant provided by the Vermont Community Foundation will cover the costs of buying three truckloads of milk from the St. Albans Cooperative Creamery, now merged with the DFA, and producing it into 11,500 gallons of 2% milk, 42,000 cups of yogurt, and 440 pounds of butter that will be delivered to the Vermont Foodbank to distribute across its 215 sites and partner organizations. The milk donations will be spread out over 10 weeks and the yogurt and butter donations are for one month only.

“We want to help the farmer here and limit disposal of that milk and also find a good market for it. This is one avenue to do that,” said Anson Tebbetts, secretary of the Vermont Agency of Agriculture, Food, and Markets, who spearheaded the initiative.

Vermont is laser focused on protecting its dairy industry, which accounts for roughly 70 percent of the state’s agricultural sales, and brings in additional, vital tourism dollars. “People come to Vermont for the landscape and the beauty and the farms,” said Tebbetts. All told, it’s a $2 billion industry. 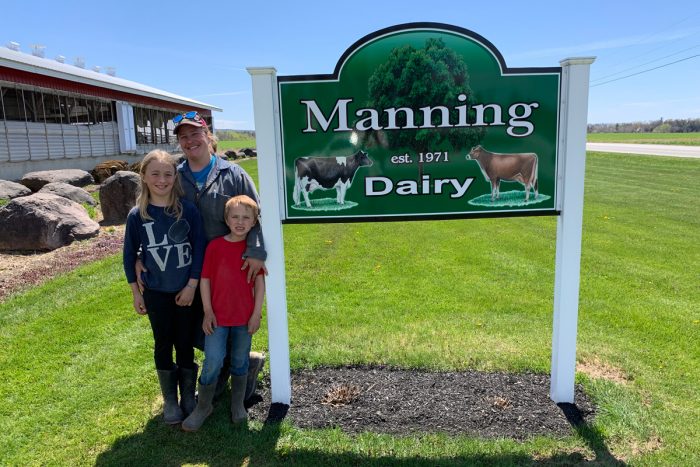 Rebecca Howrigan with her children outside her dairy in St. Albans, Vermont. (Photo courtesy of Manning Dairy)

Though Vermont is small enough that its dairy producers and processors largely all know each other, its approach of bringing in private money to rapidly mobilize key stakeholders is a model other states and regions could adopt to help support farmers and get a range of foods to those who urgently need them. While the program is short-term—and a band-aid solution to the deeper dairy crisis—all partners in the collaboration told Civil Eats they were interested in continuing the program if the demand for food assistance keeps growing over the coming months, as it likely will.

“There are families who won’t be recovering economically in the next six months, next year, or even the next couple of years. It’s going to have a long tail,” Nicole Whalen, communications director at Vermont Foodbank, told Civil Eats.

How Vermont Brought Everyone Together to Make it Happen

When Tebbetts saw that farmers were dumping milk, his first step was to find private dollars to pay for buying the milk and processing it to get it into the food bank. Unlike other farm to food bank efforts, processors are essential when donating dairy—and their costs also need to be covered. “Making sure everyone is whole on this” was top of mind, Tebbetts told Civil Eats.

Tebbetts reached out to the Vermont Community Foundation, which had launched a fundraising drive for statewide coronavirus relief. Aware of dairy’s impact “on our economy, our landscape, our culture, and our brand,” the foundation was quick to get on board, said Sarah Waring, vice president of grants and community investment at the foundation.

Once the funding was secured, the other pieces fell into place. Money was the catalyst that brought everyone together, said Jenny Karl, director of the nonprofit New England Dairy. “Everybody wants to do the right thing but they all need to … at least break even,” she said.

Whalen agreed. In the past when it was a matter of preventing food waste, bringing on processors hasn’t been easy, she said. But, “in this instance, people really came together in a new way.”

New England Dairy helped the agriculture agency convene the key players. Each had been having individual conversations with producers and processors, so they decided to join forces. “I thought of it like Match.com,” said Karl. “Hood had extra milk capacity and DFA had excess milk.”

“The easy part is getting people to the table,” added Karl. “The more challenging part is who is going to do what.”

But, because Vermont is such a small state, “it didn’t take long for everyone to agree on the process,” said Kiersten Bourgeois of St. Albans Cooperative Creamery, in an email. The cooperative represents more than half of Vermont’s dairy farmers.

“Everybody wants to do the right thing, but they all need to at least break even.”

Organic milk producers aren’t part of the effort because they haven’t been hit as hard by the pandemic. That’s largely because organic milk doesn’t rely as much on institutions and restaurants for sales, said Ed Maltby, executive director of the Northeast Organic Dairy Producers Alliance. Organic retail sales remain stable and are actually increasing in the Northeast, he said.

“Even outside of dairy, organic food sales overall are up [now]—which many believe is due to a rise in consumer awareness,” agreed Rolf Carlson, vice president of milk sourcing at Lactalis US Yogurt, the owner of Green Mountain Creamery, in an email.

Program funds will pay farmers the price they’d get on the market. Green Mountain Creamery and Ploughgate are getting paid to cover their processing costs, though Ploughgate reduced its price to help the program. HP Hood declined the funds, and is absorbing the cost of the processing.

While Tebbetts admits that the program is “not going to change wildly the price that the farmer is paid, it’s important because [the milk] isn’t going to waste. The farmer is getting some return on it and it’s going to people who really need it.”

Milk’s short shelf life posed the biggest logistical challenges. It needs to reach the food bank shortly after it’s processed so it can be distributed to partner programs, some of which operate only once a week, and then provided to people in need—all while giving people enough time to consume it before it sours. On top of the shelf-life issue, the Vermont Foodbank faces capacity concerns, as are foodbanks around the country.

Adding yogurt, with its longer shelf life, to the program, was one way to try to address those issues.

Other states could replicate Vermont’s program, says New England Dairy’s Karl, but the key is finding a foundation or perhaps a grant program from the state to pay for it. When funds are limited, “it’s challenging,” she says, “because who’s going to take the hit? If you have only, say, $5,000, how do you divide it amongst deserving folks who are trying to do the right thing? [More] funding makes things move further and faster.”

Anchor funding for a program can be supplemented with other pools of money, such as the USDA’s milk donation reimbursement program, which covers fluid milk, but not yogurt or cheese.

Another concern, particularly in larger states, is avoiding the appearance of picking winners and losers. “How do you make it so that it seems like enough people were at the table to participate,” and not bog down the process, asked Karl. Bigger states may need to take a regional approach, with multiple programs statewide.

In Vermont, and elsewhere, farmers are also taking other approaches to keep milk from going to waste. 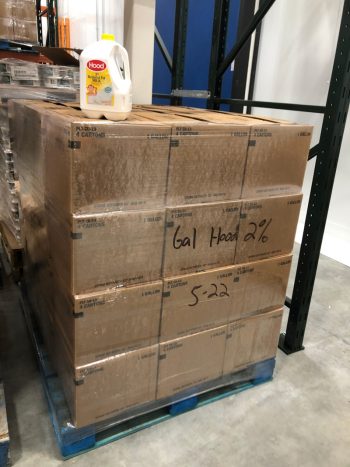 A donation of 2% milk from HP Hood. (Photo courtesy of the Vermont Foodbank)

Food banks’ stretched capacities have led to milk giveaways, as a way for the dairy industry to get milk directly into the hands of people who need it. DFA has partnered with HP Hood and other processors in New England on a number of these events, at which milk jugs are handed out to people from the back of dairy processor trucks, in big parking lots.

DFA buys the milk from farmers through a national fund it created, the Farmers Feeding Families Fund, and donates the milk to dairy processors, who distribute the final product. At one event at Boston College, Hood HP gave away 8,600 gallons of milk.

Tebbetts participated in a Vermont giveaway, and said he was moved when one woman cried as he handed her the milk. “The need is extraordinary,” he said.

“Those programs are being replicated all over,” said Sarah Barow, communications director at HP Hood.

DFA has donated more than 250,000 gallons of milk across the country, according to Bourgeois.

Other larger dairy processors such as Danone and Chobani are similarly working to get surplus milk into food banks nationally. But concerns remain that these efforts aren’t enough to sustain dairy farmers through the ongoing pandemic.

The Vermont Community Foundation is open to a second round of funding for the program, but the state has many other priorities for COVID-19 relief, and the foundation is reserving half of the $4.8 million it’s raised for longer-term recovery programs, said Waring.

Vermont’s “economy is so dependent on tourism and global supply chains for milk. One of the conversations when we look to the second phase of our grantmaking is, how do we go back to … a resilient regional food system that enables us to weather this kind of thing when it comes again,” said Waring.

The Rotary Club in Brattleboro is raising money to keep the program going, said Tebbetts. Dairy processors are on board for another round.

“The good thing is we have a really good working group now, so I think everything and anything is on the table as we look forward,” said Kyle Thygesen, former director of milk sourcing for Lactalis U.S. Yogurt. The creamery is particularly interested in providing yogurt to summer school programs, he added.

But Tebbetts is worried about the bigger picture for Vermont’s dairy farmers if milk prices don’t rise soon. It costs $1.70 on average to produce a gallon of milk, he says, and the price is now about $1.00 per gallon. Efforts to get milk that would otherwise be wasted into the charitable food system can’t alone close the gap in supply and demand that would raise prices. While the market may rebound by fall, between now and then, he says farmers will need some assistance.

The USDA is providing direct payments as part of the CARES Act, but “the checks won’t be big enough to cover the losses,” said Tebbetts. “Federal government, state government, private folks are going to have to intervene or we’re going to have mass losses of dairy farms.”

For now, Rebecca Howrigan is doing her best to find ways to cut back production and keep her farm whole. She’s proud her milk is going to people who need it, especially when the only other option is dumping it. And she says, “even though our pay prices are low, we do still have jobs we can go to every day, and hopefully a job we can go to when this is done.”