Red Wing United is Building Power in Laredo, ‘The Last Place to Get Aid’ | Civil Eats

Red Wing United is Building Power in Laredo, ‘The Last Place to Get Aid’

Two young organizers have rallied the border town community to meet the needs of the most vulnerable during the pandemic. 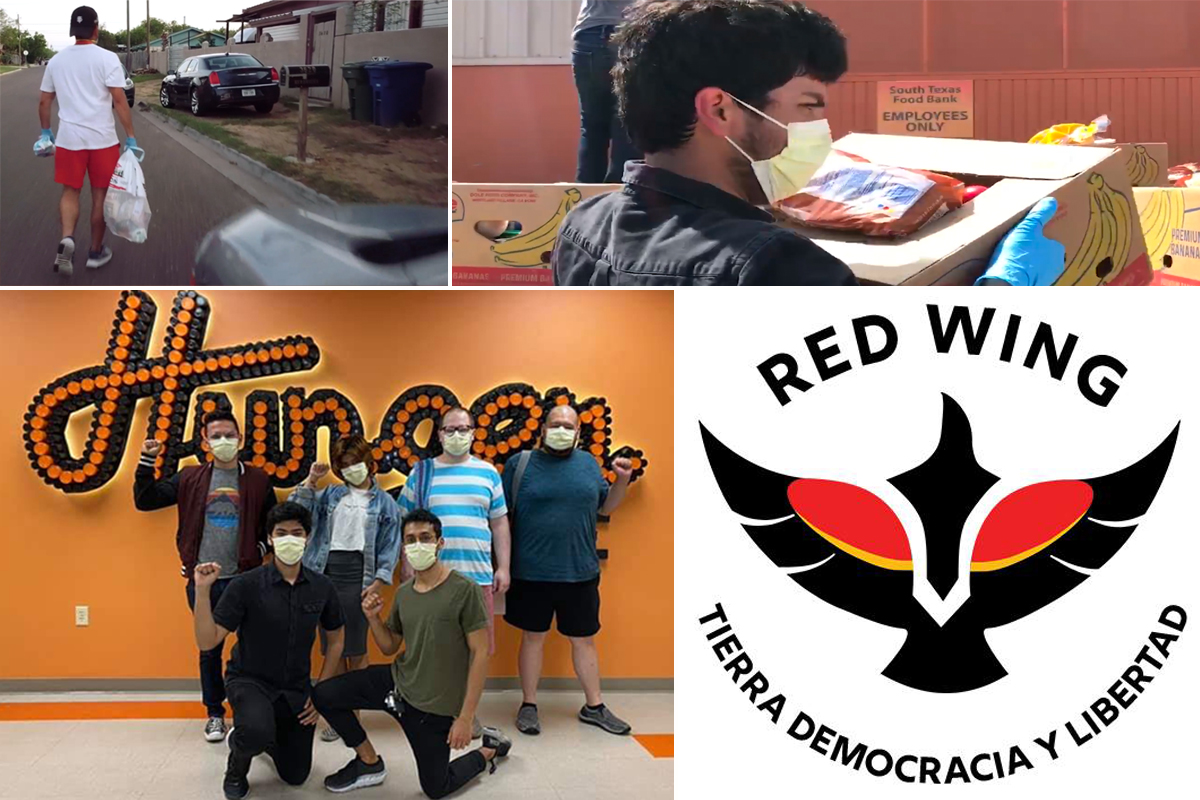 Two years ago, when organizers Alec Martinez, 24, and Silvia Castaños, 19, founded Red Wing United in the border town of Laredo, Texas, they wanted to ensure all residents had access to clean water, and to push local elected officials on the issues of inequity plaguing the city.

The two organizers viewed their political leaders as more concerned with money than with people. To start shifting the power, they began donating bottled water to those who didn’t have access to drinkable water and hosted teach-ins, expanding both the intellectual and on-the-ground activism in Laredo.

Their name was inspired by a blackbird with red wings that’s populous in the region, and “beautiful conceptually and visually,” Martinez said, noting that red is the color of revolution.

Now, with the coronavirus pandemic upending daily life, Red Wing United has expanded their efforts. They’re working in tandem with the local foodbank to deliver boxes of food and providing other necessities to the elderly and others who have few support networks at their disposal.

“We knew that help wasn’t coming,” Martinez said. “In a state like Texas, the border is often the last place to get aid.”

Situated on the north bank of the Río Grande River in South Texas, Laredo exists at the intersection of multiple systemic oppressions, or the “triple jeopardy” of disenfranchisement, as Martinez describes it. In this border town of 260,000, the poverty rate is 30 percent, more than four times the national average, and clean water and healthy food are difficult to access. In September of 2019, the city issued a boil-water advisory that was lifted two months later.

But Castaños and Martinez say that pipes in the poorest parts of the city still haven’t been replaced, and even now, most still drink bottled water. Additionally, the vast majority of residents are Latinx, a group that is often ignored by the federal government and now disproportionately impacted by the coronavirus.

Over the first five weeks in operation, Red Wing packaged and delivered over 1,000 boxes of shelf-stable food, fresh produce, and other supplies to Laredo residents in their homes. 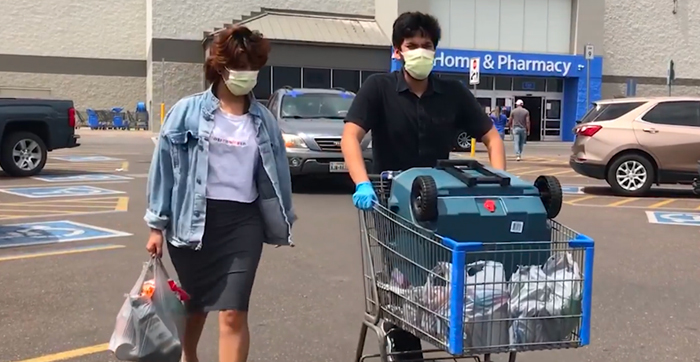 “Doing relief work teaches you a lot about who’s got your back in times like these, and it’s your neighbor,” Martinez said.

The pandemic has made many sociocultural, economic, and political divisions much more visible. In addition to the mortality rates of those with preexisting conditions (which also trend along racial, ethnic, and economic lines) and inequities in the medical care between white people and people of color. Laredo was one of the last cities to receive COVID-19 tests, and nearly 30 percent of residents are uninsured, and the pandemic has shed new light on the vast gap that exists between people who have regular access to nutritious food and those who do not.

In the state of Texas, there are roughly 1.4 million households that receive supplemental nutrition assistance (SNAP) from the federal government, though there are hundreds of thousands more who live in poverty yet don’t receive assistance because of state spending priorities. In rural areas, about 14 percent of families receive SNAP benefits. In March, an additional 230,000 Texas families applied for SNAP benefits.

In Webb County, where Laredo is located, about 30 percent of people relied on SNAP before the pandemic. At that point, Camilla Sosa, marketing director for the South Texas Food Bank, says the food bank, which serves eight counties in the south Texas region, provided food to an average of 130,000 people every month. Now, that number has increased by about 70,000.

“Doing relief work teaches you a lot about who’s got your back in times like these, and it’s your neighbor.”

In many families, Sosa said, parents have had their hours cut, meaning they don’t qualify for unemployment. “Food is just not lasting, the grocery bill has doubled,” and some parents can’t afford to feed their kids because they’re home from school. Food scarcity has quickly become the secondary health crisis in Laredo, she said.

Like other people who lack access to healthy food, Loredo residents also suffer elevated rates of diabetes, hypertension, and other chronic health problems, which weaken their immune systems and put them at greater risk of succumbing to illnesses, including coronavirus. Marcela Uribe, head of the Laredo Center for Urban Agriculture and Sustainability, said she is concerned about the high rates of diabetes in Laredo, and that 30 percent of residents live with obesity.

“We have a huge issue with weight and healthy eating habits,” said Uribe. The center runs two community gardens and an agriculture education program. The gardens have allowed them to donate upwards of 50 pounds of fresh produce to the South Texas Food Bank, which then packages the boxes distributed to the Laredo community, Uribe said.

Supported by a small group of volunteers, Martinez and Castaños started building and delivering boxes of food in early March.

Within a couple of weeks, they established a relief fund in Laredo and a second in the Rio Grande Valley, two areas that lacked the necessary political infrastructure to quickly coordinate volunteers in delivering resources, according to Martinez and Castaños. They put the word out on social media and invited those in need to call their emergency hotline.

At first, Martinez and Castaños were funding the food and resource delivery through what cash the organization had on hand, and at times, out of their own pockets. Once the group developed a partnership with the South Texas Food Bank, however Red Wing no longer had to purchase food itself, and it began to focus their funds on over-the-counter medication. One of the most common requests? “Diabetic testing strips,” said Martinez.

Most of the volunteers who come to support in Red Wing’s relief efforts are in their 30s and 40s, with few people in their 20s—that’s not necessarily an indication of who cares, but of who is willing to do the work, Martinez said. Members of the community and individual elected leaders donated to the fund, but Red Wing hasn’t received any institutional funding or support so far. And as the crisis has worsened, the donations have slowed, they say.

Democratic state Senator Judith Zaffirini has supported the efforts both by donating to the fund herself and spreading news of the organization within her network. In March, she called Castaños to ask about Red Wing’s work.

“I was very impressed with her and with the work she described,” Zaffirini said, noting how the two spearheaded the effort quickly, and built out a second hub in a matter of weeks. “Then I put them in touch with the South Texas Food Bank,” Zaffirini said. “Red Wing was able to prepare more boxes and deliver them to those who weren’t able to leave their houses.”

Food bank protocol doesn’t allow for family members to receive supplies on behalf of someone else, so in going directly to those who aren’t able to leave their homes, Red Wing is able to reach people the food bank can’t. “We’re very, very grateful to Red Wing,” said Sosa.

When they started, the relief efforts took as much time as a “full-time job,” but a couple of weeks in, Martinez and Castaños have spent less time coordinating and delivering resources as the shock of shelter-in-place has worn off and as they’ve been able to “create systems, protocols, and processes” to streamline the work.

Not a Reason to Celebrate

The success of the grassroots effort isn’t exactly cause for celebration, Castaños and Martinez said. Instead, Red Wing’s work demonstrates just how many Laredo residents have fallen through the social safety net.

“We shouldn’t have to be doing what we’re doing—that is certainly the government’s job,” Martinez said. “It speaks volumes to the age that we exist in; it doesn’t bode well for the future.”

He wants to see more politicians step up in ways that they haven’t, including helping to execute the work.

“We shouldn’t have to be doing what we’re doing—that is the government’s job.”

Red Wing’s founders believe there’s no reason people should be going hungry in the richest country in the world, nor should farmers have to dump food because it can’t get to the grocery store or to the food bank. There are enough resources for everyone, but there’s a problem with the way we distribute them, Martinez said. He sees all these problems as a function of how systems of oppression work, linking access to resources to income and race.

“So much of our history was predicated on oppression and genocide, on keeping people in these subservient positions—one missed paycheck away from poverty,” he said. Now, he adds, “that [missed] paycheck is happening.”

Red Wing’s mission is to “completely and radically” dismantle existing systems and craft a world that builds power from the ground up, rather than dispenses it from the bottom down, said Martinez.

Going forward, Red Wing is looking to build self-sustaining communities and housing cooperatives, especially for poor, Latinx communities. The long-term goal is to “reimagine what housing looks like” in hopes of building community and values of interdependence while preparing for the next crisis, Martinez said.

In some ways, activism has prepared Martinez and Castaños for dealing with the isolation and challenges the pandemic has presented or exacerbated. They understand that their work can’t get to the root of systemic issues because “the need is too great,” Martinez says.

Access to housing and healthcare have long occupied space in the national conversation about equitable distribution of resources, but food is also fundamental. “What we can do is identify who’s willing and able to do this work [and] slowly bring more and more people into the fold,” he says.