Community Food Co-ops Are Thriving During the Pandemic

Compared to supermarkets with empty shelves and long lines, co-ops' long-term focus on building resilient foodsheds is paying off. 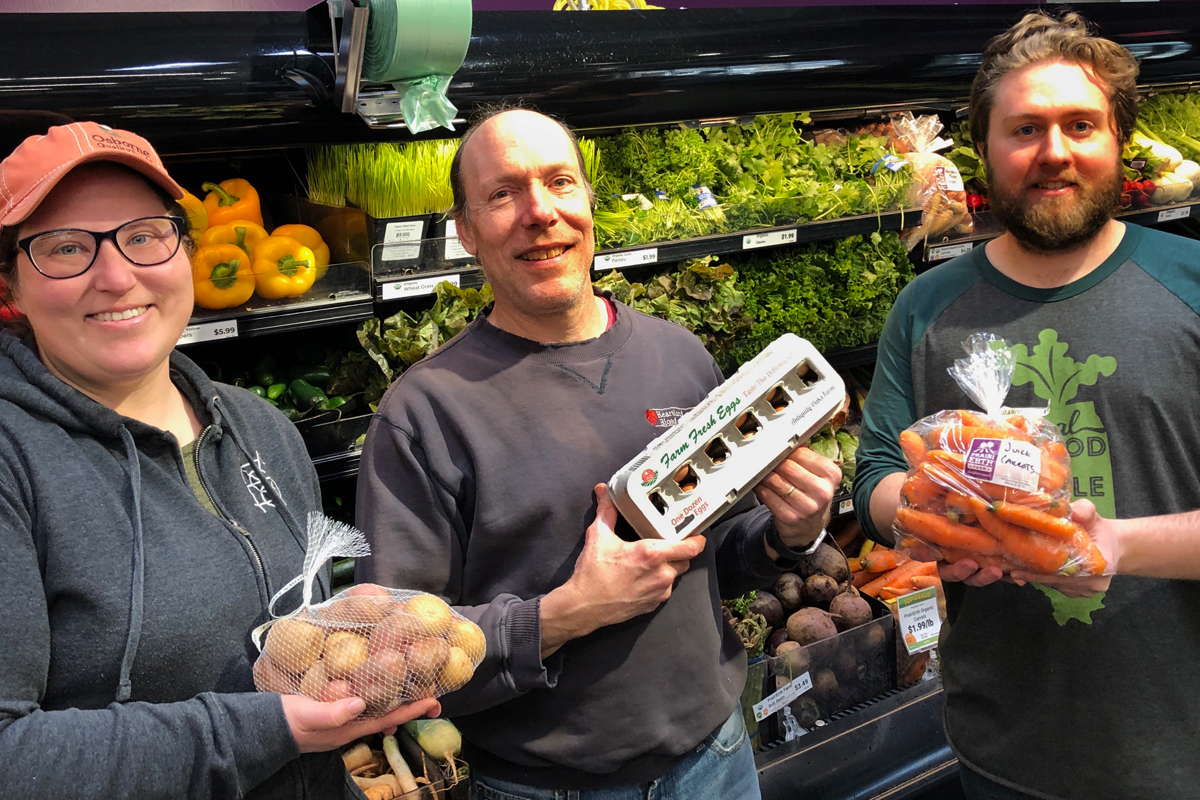 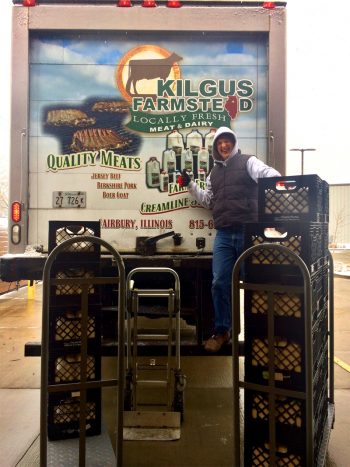 When the coronavirus pandemic shuttered the schools, coffee houses, and other wholesale customers of Kilgus Farmstead, a beloved family-run meat and dairy operation about 100 miles southwest of Chicago, its owners were forced to dump product, thin their herd, and scramble to find new outlets.

Then Green Top cooperative grocery in Bloomington, Illinois, stepped in to help. They took Kilgus’s plight as a call to (social media) arms, advertising a two-for-one milk special and appealing to community members to “help some farmers unload some milk and bring in some income,” says board member Melanie Shellito.

Soon after, early in the morning on April 14, a Kilgus refrigerated truck arrived at the co-op to deliver crates of milk. Within hours, that stock was sold out—a feat repeated the next day and which yielded, all told, milk sales 10 times higher than average for the co-op. “Everyone was thrilled to help,” says Shellito.

Similar tales of co-ops stepping in to take farmers’ otherwise market-less bounty—and concurrently boosting their own inventories—have been unfolding across the country since mid-March. Partially as a result, “A lot of co-ops have seen their biggest sales days in their histories,” says Erbin Crowell, executive director of the 39-member Neighboring Food Co-op Association (NFCA) based in Massachusetts. (Grocery and beverage store sales overall went up more than 25 percent in March, while stores prices nationwide experienced their highest jump in 50 years in April.)

This is an alternative narrative to reports of thwarted national supply chains hampering supermarkets’ ability to keep shelves stocked. And it’s left many in the cooperative grocery world wondering why, in an era of discussion about the importance of regional connections to food security, co-ops—with their built-in devotion to the local food movement, relationships with small farmers, and commitment to community building—have been overlooked as a vital cog in that wheel. And they wonder, too, if the current crisis will show Americans, once and for all, why shopping at a food co-op is worthy of their consideration.

Designed to Support Their Local Communities—and Each Other

Cooperatives are simply businesses or organizations that are owned and run by their members; in addition to consumer-facing entities like grocery stores, they include health centers, daycares, and credit unions. The first co-op groceries opened in North America in the early 20th century. Ever since, their popularity has ebbed and flowed, then often spiked in response to stock market crashes, corporate exploitation, and the racism that cut African Americans out of the usual procurement chains—and which compelled civil rights activist W.E.B. Du Bois to call for a separate, cooperative, economy as a means to financial independence.

“Out of necessity, Black folks during the Civil Rights movement had to create co-ops to get services,” says Cornelius Blanding, executive director of the Federation of Southern Cooperatives (FSC), an association of 75 Black (mostly) farmer co-ops that share costly resources like trucks, marketing, and packing and distribution facilities. 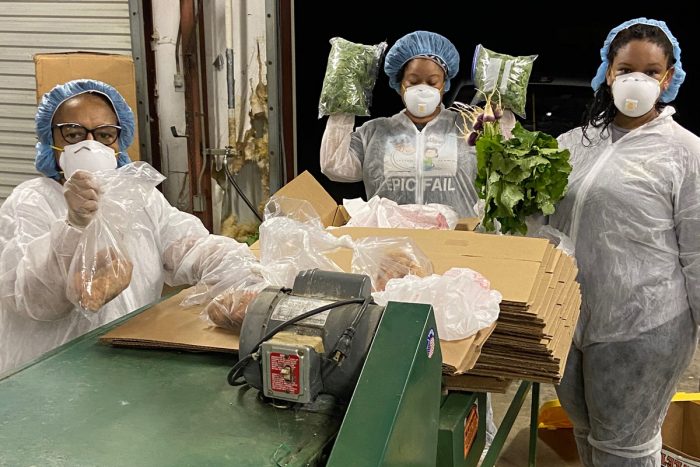 Packing greens for local markets at Indian Springs Farmers Co-op in Mississippi. (Photo courtesy of the Federation of Southern Cooperatives.)

During one of their heydays, through the tanking economy of the 1950s, consumer co-ops numbered around 20,000 and boasted 6 million members. Today, an estimated 380 co-op storefronts pepper the American grocery-scape, a number that includes 93 co-ops that opened after the 2008 recession.

Co-op groceries have gone out of their way to be responsive to the needs of their communities.

Co-ops suffer an unfortunate reputation, possibly left over from their association in the 1970s with the natural foods movement, as being “only for hippies or the food ‘elite,’” writes Jon Steinman in his recent book, Grocery Story. In truth, according to Crowell of NFCA, food co-ops have evolved since those patchouli-scented days. “They’ve gone out of their way to be responsive to the needs of their communities,” he says. “What you’ll see now is a broad mix of mainstream products alongside natural, sustainable, bulk organic products.”

In the co-op world, buying local is a given. On average, local sales account for 20 percent of co-op revenue nationally, versus 6 percent at supermarkets, “and we’re serious about getting it to 30 percent,” says C.E. Pugh, CEO of co-op member association National Co+op Grocers. The average co-op also sources from 300 vendors, as opposed to 30 among conventional grocers. “That diversity of supply served co-ops well during the pantry-loading season of the first three pandemic weeks, and that resiliency is holding up,” Pugh says.

In addition to sourcing locally, the cooperative movement considers building a support system among co-ops another of its seven guiding principles. It’s why NFCA helped launch five new co-ops in the Northeast in the last 10 years; and it’s why they’re collaborating with Blanding and FSC to buy pecans and watermelons from the organization’s farmers, who lost 85 percent of their markets in the pandemic. It’s also why National Co+op Grocers members have been holding frequent tele-meetings to share best practices for keeping staff and shoppers safe. 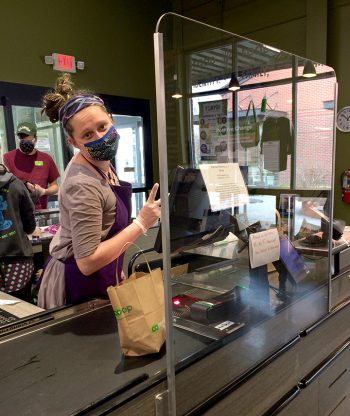 As new customers are pulled in by reports of full shelves, they find, as a bonus, that safety protocols not in evidence at some supermarkets—masks, hand sanitizer, staggered entry, even pre-paid curbside delivery—are often out in full force at the co-op; the hope is that they’ll be inspired to return even after the pandemic has run its course.

Co-ops are entities that are designed to serve community members, whether staff, shoppers, or farmers, and as such, they’re “show[ing] how inherently different they are than other retailers,” says Benjamin Bartley, a Penn State extension educator who contributed to a brief on COVID-19 farm-to-consumer sales. Over the last three chaotic months, that difference has helped some of them thrive.

Pivoting in a Pandemic

That’s because the things that make a co-op a co-op make it flexible in a crisis. “Most grocery stores are run by very large corporations,” says “Supermarket Guru” Phil Lempert. “Even when you look at small chains like Stewart’s,” which has 335 locations in New York and Southern Vermont, “there’s a corporate hierarchy that doesn’t exist in co-ops. That allows [them] to make decisions quickly.”

For example, “When my local Kroger was running out of eggs, produce, flour, my co-op contacted local farms and said, ‘Where are you hurting, what can you not sell, how can we help?’” says Jacqueline Hannah, assistant director of the Food Co-op Initiative, which advises co-op startups.

“The best thing about the local food movement is that we have a different supply chain, and when demand increases, we’re able to move more quickly with local suppliers,” says Jeremy DeChario, general manager of Syracuse Cooperative Market in upstate New York. “We’re also going onto Facebook groups for farmers that have seen a decrease in their wholesale business and saying, ‘Give us a call if you’ve got product,’ so we can help them stay afloat.”

When the pandemic first hit the Northeast, most available local produce was winter crops such as squash, potatoes, and apples pulled from cold storage. That’s shifted to include lettuces, asparagus, and other fresh vegetables as the growing season has begun even in chillier regions of the country.

Katie Bishop is a farmer at PrairiErth, a 35-acre operation outside Atlanta, Illinois, that in 2019 supplied 60 percent of its vegetables to restaurants and retailers, including three Midwestern co-ops; the other 40 percent went to CSAs and farmers’ markets. Now that there’s no restaurant business to speak of, and “customers don’t feel comfortable at markets or coming to the farm, co-ops provide us with a safe place to continue to do business,” Bishop says. 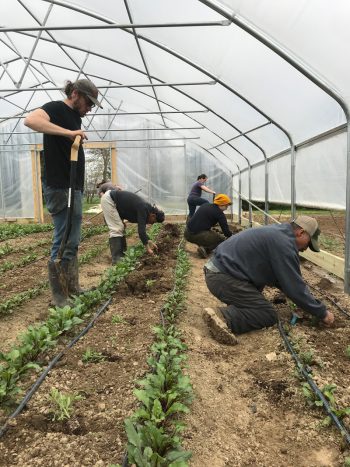 Unlike supermarkets, which require a steady stream of “usuals”—perfect-looking broccoli, peppers, romaine—co-ops can take almost anything Bishop offers. “As soon as we sell out of sweet potatoes, [customers] want our seconds,” she says.

Nevertheless, for farmers to have success supplying co-ops in the long-term, there’s a huge need for aggregators, says Bishop. This is because “so many farmers in our area are of a [small] scale where [lower] wholesale prices don’t fit their business plan. But if they have produce they can’t sell at a farmers’ market, or they have no experience with CSAs, they’re gonna be stuck.”

At the moment, there’s only one existing U.S. distributor, Co-op Partners Warehouse in St. Paul, that’s built its business on supplying co-ops. A co-op itself, when the pandemic began wreaking havoc on supply chains, “we found we were able to get product where other distributors, which carried items from the same farms, could not,” says inside sales and marketing manager Lori Zuidema. Why? “Co-ops have a long precedent of being ethical, and our buyer has a 20-year history of developing relationships with small farmers. Also, we’re good at paying.”

“After every disaster, co-ops fill the void, and you start having a groundswell of people who want to join,” says FSC’s Blanding. But the barriers to starting co-ops, let alone keeping them running, are hefty.

For starters, there’s an educational hurdle: People think they have to become members (not necessarily) or work on-site (rare, due to labor laws). Also, the power of “community ownership and democratic control is not a story that’s familiar,” says NFCA’s Crowell. Although he admits, “It’s easy for co-ops to blame lack of awareness for our difficulties when we need to better communicate what makes us different.”

Co-ops are expensive to launch and operate. “There was a time when for $1 million you could open a nice store,” says Pugh of NCG. “Now it can be as much as $10 million, and a grassroots organization has a great deal of difficulty raising that much capital, period, the end.” (And it’s worth noting that the famous and usually sturdy Park Slope Food Co-op in Brooklyn—of which this writer is a member—is struggling during the pandemic, because it’s hiring all paid employees, rather than using mostly member labor, for the first time in its 47-year history.)

There’s also stiff competition from conventional supermarkets, which have jumped on the local and sustainable bandwagons—whether or not their offerings truly meet those criteria. Explains Crowell, “We’re never going to beat a monopoly like Amazon [on price]; it’s not how scale works.”

“We have great potential to build local infrastructure and build a more healthy and just sustainable food system.”

Regardless, the list of pluses is long, and for those inclined to rattle them off, they far outweigh the challenges—especially during crises. “Co-ops serve with love and care and kindness, and people are coming in and finding new community, which resonates in a time of uncertainty,” says Pugh. That concept of community extends to workers, to whom many co-ops are providing hazard pay.

For Crowell, community building and outreach are where co-ops shine. “We have great potential to build local infrastructure, and to work across class and race and regions to build a more healthy and just sustainable food system,” he says.

Blanding agrees. “It all comes down to people helping themselves, and in order for that to happen, you have to cooperate. The pandemic opens our eyes to how basic our need for human contact really is.”

“The way we’ve come together to support our communities in this crisis has been a moment of light in the darkness and for us to realize, we weren’t playing around,” says Hannah of the Food Co-Op Initiative. “We’re collectively building something that makes a difference. Imagine what would happen if we doubled down.”