How The Fry Bread House, a Mainstay of Indigenous Cuisine, Perseveres | Civil Eats

How The Fry Bread House, a Mainstay of Indigenous Cuisine, Perseveres

As restaurants fully reopen today in Arizona, a beloved Phoenix restaurant is a model of Indigenous adaptation and survival. 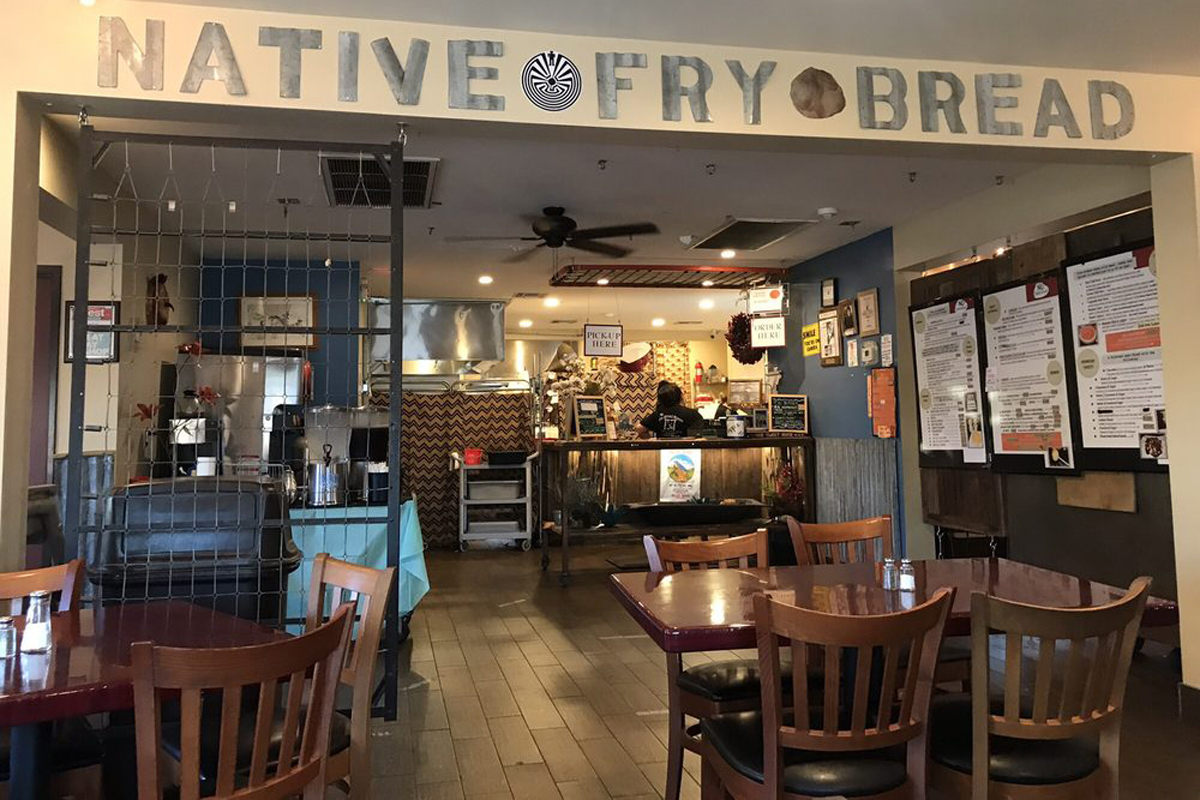 On a recent Thursday, the lunch rush at The Fry Bread House in central Phoenix was more of a trickle. By noon, there were a few cars in the sunny lot, which had always been full in pre-pandemic days. But by one o’clock, traffic had slowed to a drip, the odd car stopping to pick up fry bread, stew, and the ancient O’odham flatbread, ceme’t.

The Fry Bread House has long been beloved for many reasons—the quality of its food, how it takes care of its staff, and more—but also because you can count the number of Indigenous restaurants in Phoenix on one hand.

“It reminded me of home,” says regular customer Jaren Bates, a chef and forager who often travels between the metro area and the Navajo Nation and frequently stops in for fry bread tacos, pinto beans, and burgers. “Everything from the smell inside the restaurant to seeing the moms, sisters, and grandmas doing all the cooking. It brings back a lot of childhood memories.”

In 1992, Tohono O’odham tribe member Cecelia Miller opened The Fry Bread House with three kinds of fry bread. She made $50 her first day, and the battle to stay open has been uphill from there. By February 2020, with a menu of about 30 items, and a James Beard Award on the shelf, Sandra Miller, Cecelia’s daughter, had taken over the restaurant. [Editor’s note: Sadly, Cecelia passed away last week after a long illness.]

Fry bread’s origins lie in land seizures, forced marches, and federal rations. Made with white flour and deep fried in shortening, it has often been the subject of controversy. But at The Fry Bread House, Sandra serves it alongside older traditional foods, such as its usually whole-grain precursor ceme’t (which goes by many names). 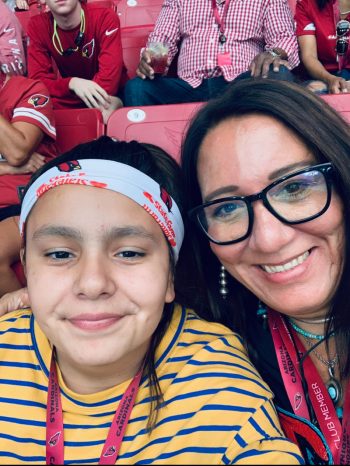 Sandra Miller with her daughter.

“O’odham people traditionally would make ceme’t every day,” Miller says. “If they’re eating in here regularly, they’ll eat the burritos or ceme’t dipped in their stew, knowing that it’s better for you. The fry bread, it’s more special for people. They don’t eat it every day.”

And yet the popularity of these comfort foods has kept the beloved second-generation open for decades, despite difficult odds. Like other Indigenous restaurants, The Fry Bread House has faced perpetual obstacles on top of long hours and slim margins, including poverty, racism, disproportionate health crises, and other injustices that afflict Indigenous communities. And that was before March 2020, when state and national shutdowns closed restaurants and the coronavirus began devastating Indigenous communities in Arizona and nationwide.

Now, The Fry Bread House and its staff of 16—made up of people from the O’odham, Navajo, Hopi, Yaqui, and Apache nations, among others—face an uncertain future. And this leading light of Indigenous cuisine isn’t alone. Across the Southwest this spring, Indigenous eateries have shut down, while others are barely holding on. Restaurants including Amigo Café, a family-owned Navajo restaurant in Kayenta, Arizona; Y’aak’a Cafe in Ancoma Pueblo, New Mexico; and the many located in shuttered casinos have all closed.

Today marks the first day that Arizona restaurants can fully reopen since the state forced them to close in March, and despite The Fry Bread House’s long list of obstacles—including health risks to employees and difficulty acquiring ingredients—Miller and her staff plan to persevere.

Though reservations flank Phoenix and cover a quarter of Arizona, most of Sandra’s staff lives in the city itself, a common circumstance for Native people in central Arizona. Still, American Indians make up just 2 percent of the Phoenix population. Work is a huge urban draw. “There’s a housing shortage and a job shortage in the tribal communities,” explains Diana Yazzie Divine, CEO of Native American Connections, a non-profit striving to improve health, housing, and other facets of the local Indigenous community.

Nevertheless, many Native people travel back to the reservations on their time off. For instance, The Fry Bread House employee Steven Velasco drives to the Tohono O’odham reservation some days off to visit his loved ones; and he travels through the desert to clean his mom’s grave. Other employees go north to the Navajo Nation on free days. Another staff member travels to visit her fiancé four hours away. “Our Navajo staff, they work all week. They’ll go home for one day then drive back,” Miller says. 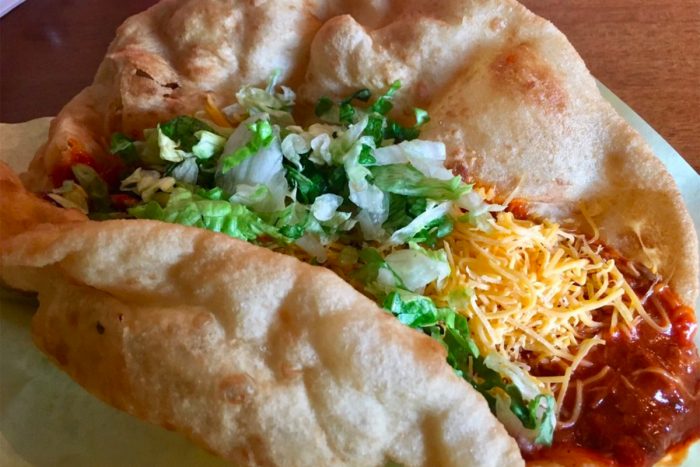 Given the urban isolation and a cultural reluctance to seek handouts, Sandra believes COVID-19 has the potential to be especially devastating to her employees.

In addition, she notes a lack of “support systems and community resources” for American Indians in the city. “Native people don’t know where to go,” Sandra says. “They don’t like to ask for help. It’s always, ‘We’re just going to do what we can. We’re just going to take care of ourselves.’”

“We’re already at a disadvantage when it comes to medical health,” Miller says. “We know that if we get the virus, it can wipe out our entire family if we bring it home.”

Still more risk flows from a common reluctance to seek Western medical treatment, largely born out of shortcomings of the Indian Health Service, the under-funded federal healthcare provider for federally recognized tribes. “We don’t get proactive medical care,” Miller says. “We have to wait until it’s an emergency, and then wait hours and hours to be treated.”

These dangers worry Miller—for the sake of her employees and for her own sake. “I have asthma severely, so if something happened, I could die,” she says.

Trouble in the House

The state of Arizona limited restaurants to takeout, delivery, and drive-thru service in March. By mid-April, The Fry Bread House had slowed to a fraction of its former sales and was “barely making payroll.” Additionally, it was having trouble procuring the ingredients they need, especially pinto beans and flour, to produce even the limited number of meals.

“[Before the pandemic] we were getting between six and eight 50-pound bags of flour at a time,” says Kris Harris, head chef and former dishwasher. “Now, we’re limited to one or two.” 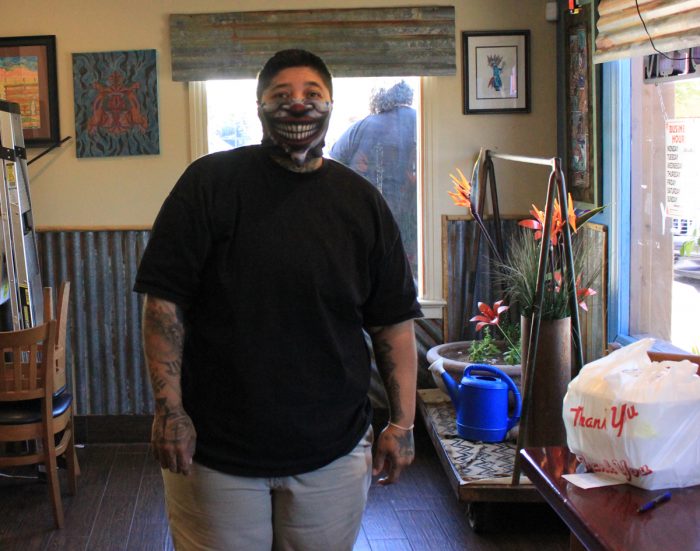 Rather than rely on a single supplier, they now have to make several trips to find ingredients. “We spend more time going to different locations,” Miller says. “We can’t afford to have anything delivered.”

To compensate for lost sales, Sandra has cut her employees’ hours. She gave staff the option to be laid off and apply for unemployment benefits. All but one, who has entered into mandatory quarantine, have stayed on the job out of necessity.

Nationally, the unemployment rate for Native Americans is nearly double that for other Americans. Some Fry Bread House employees have spouses long or newly out of work, while others have unemployed or dependent children, grandchildren, and extended families to feed. On reservations, essential businesses and casinos have closed, cutting off crucial sources of jobs and income.

Traveling to and from the restaurant also presents issues—especially for older workers. Half of Miller’s employees take public transportation to work. Busses have been full, irregular, or limited to a few riders, making for erratic commutes and long trips. Miller highlights another factor in its ability to stay open: The risk of taking public transportation to work might be smaller than the risk of staying home. 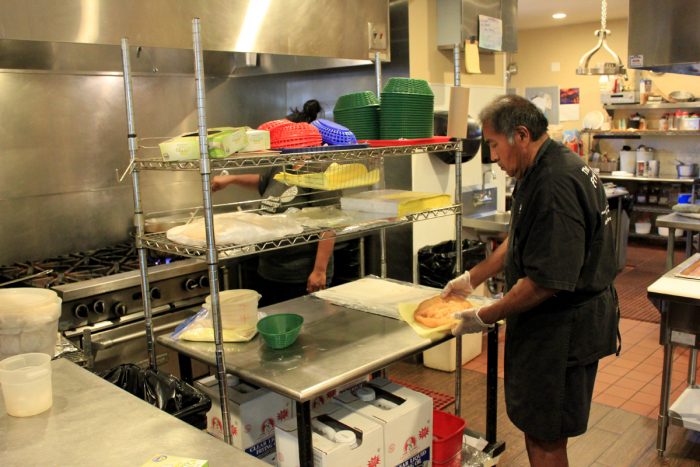 For some, restaurants like The Fry Bread House can offer a sanctuary free from domestic violence and other dangerous situations at home. “Some people have family problems and they don’t want to stay home all day,” Miller says.

Despite its minimal sales, The Fry Bread House stays open to provide a lifeline for its employees. It also stays open for customers who rely on Indigenous foods for comfort, sustenance, and a link to the past.

“If we want to make a pot of frybread and a bunch of beans, it takes a while,” Miller says. “So you have families that [work] two or three jobs. You have families that aren’t in the same homes.” Having squash burros and red chile hot at a welcoming eatery down the road opens a short avenue to a traditional lunch or dinner.

A month-and-a-half into the pandemic, the staff remains busy. Velasco brushes butter onto puffy discs of fry bread and lids cups of green chile stew. Chef Harris picks up the phone, notches orders of pozole and tamales, and doles out bags to customers. Sandra corrals supplies, keeps her finger on the restaurant’s strings and pulse. 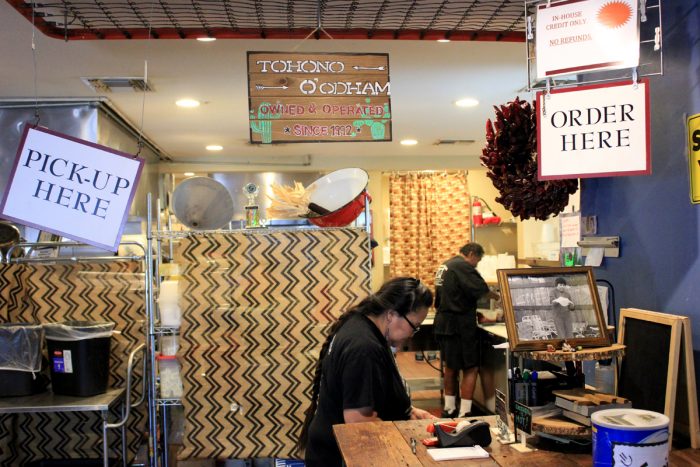 She worries about Juan, her Tohono O’odham dishwasher, who is participating in a federal second chance program to allow him to fully leave incarceration and be fully reintegrated into society. Mandatorily quarantined in his halfway house and unable to work and pay his own bills, Juan can also no longer send money back to his family.

She worries about chile harvests, about toilet paper, and about her daughter’s homeschooling. But she doesn’t worry about Fry Bread House’s survival, and she doesn’t question the resilience of the American Indians who work there.

“We’re the greatest people at adapting to change,” Miller says. “That’s what we’ve done since they tried to wipe us out for so long. We just keep adapting and growing and surviving.”

Except where noted, photos by Chris Malloy.

Chris Malloy is a writer based in Phoenix and is the food critic for Phoenix New Times. Read more >