California Is the Nation’s Ag Capital. Here’s How it’s Addressing the Food Crisis.

We spoke to Karen Ross, head of the state’s food and ag agency, about supporting farmers, connecting to food banks, and meeting the bottom line for feeding the state. 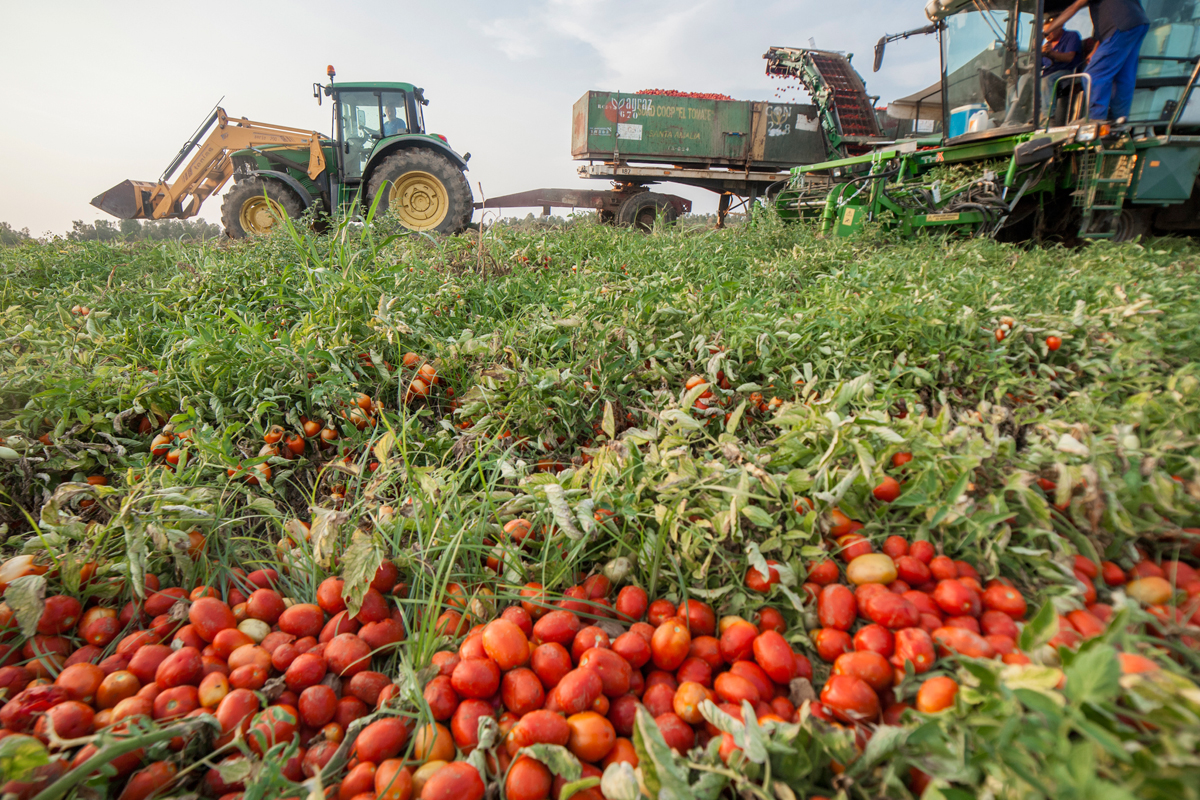 As the COVID-19 pandemic ushers in levels of food insecurity more severe than what we saw during the Great Recession—an estimated 1 in 5 U.S. households don’t have enough to eat—the nation’s most populous state is taking a number of steps to fight hunger.

In late April, California Governor Gavin Newsom announced initiatives to curb food insecurity among recipients of CalFresh and the state’s SNAP program, children receiving free or reduced school lunches, and the elderly. The state has enlisted restaurants to serve three meals daily to vulnerable seniors (although that program has yet to achieve its lofty goals) and scaled up its Farm to Family program, which allows farmers to donate their goods to food banks rather than destroy the products they can’t sell.

And tomorrow, the state is expected to unveil guidelines to allow restaurants to reopen for dine-in service, a hotly anticipated move that would ease the unemployment crisis in the state and boost economic activity.

The state’s moves come as specialty crop producers across the country report approximately $5 billion in losses from cancelled or reduced contracts, with California farmers and ranchers suffering a loss of 50 percent of their markets. At the same time, food banks in the state have seen demand from the public rise to 73 percent over last year, and CalFresh has experienced a 140 percent increase in applications. This disparity highlights the importance of connecting farmers with surpluses food to food banks.

“Putting food on the table during this pandemic is hard for families on the brink,” Newsom said in an April 29 statement. “It’s in that spirit that we’re expanding our Farm to Family program while also working to connect low-income families with vital resources and financial support. We thank our farmers for stepping up to donate fresh produce … And we want families struggling to access food to know we have your backs.”

The governor has credited CDFA Secretary Karen Ross with spearheading the movement to fight food insecurity in the state, particularly the expansion of the Farm to Family program. Civil Eats spoke with Ross, who has served in her role for nine years, about her efforts as California contends with a projected 18 percent unemployment rate and a $54 billion budget deficit. So far, 128 farmers and ranchers are donating to food banks and another 200 farmers have expressed interest in doing so.

Can you explain the Farm to Family program and the plans to expand it during the pandemic? 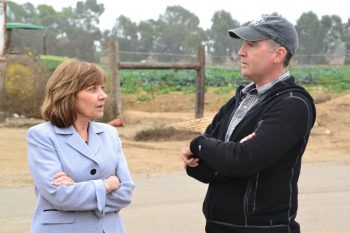 Karen Ross during a visit to Suzie’s Farm in southern California. (Photo CC-licensed by Suzie’s Farm)

This is a program that has been in place for more than 10 years, but there’s a need to scale it up. We’re in a time where you have farmers who’ve already put their product in the ground, and that’s going to have to get harvested somehow or another.

This program will offset those harvest costs, so that food doesn’t go to waste. When we grow so much seasonal, highly perishable food, you only have a short window of time to get it harvested, packed, and delivered.

Farmers would always prefer to have people eat their food, not throw it away. And the infrastructure of the California Association of Food Banks has really perfected [their approach] over the last 10 years. They’ve got their centralized warehousing. They have trucks. They have a longstanding network of 128 farms that they work with every year. They have four regional coordinators. And they’ve got a way of getting it into their facilities [safely]. From there, they break it down into the types of packaging and the amounts of food that are needed by the individual food banks.

You don’t want to send a food bank more food than they can store, because that’s the point when food waste usually happens. What we found, though, is that with this horrendous unemployment and sudden demand for food, they have to get trucks to a lot of those smaller food banks more frequently—and they have to send more every time. We work closely with the Department of Social Services, which oversees about 10 food banks, and the gap we’re try to fill now is with our tribal communities.

Why has there been a gap in serving tribal communities?

In our state, the tribal communities have been very successful in the hospitality industry. As we know, the stopping of travel has really impacted any type of entertainment, hospitality, or tourism setting. So, the tribes now have a need for food banks, and as sovereign nations, they are not always directly connected to the existing food bank system. There are tribal assistance programs at USDA and other agencies, but the need has been so dramatic and so sudden, we want to make sure we’re able to partner with the tribes on any future programs to make sure that they will also have their needs met.

How many pounds of food from farmers will be going out to California food banks monthly?

How are you managing the financial aspects of pulling this off?

The Department of Food and Agriculture identified some yet-unspent specialty crop block grant dollars, and we sought a waiver from USDA to redirect those dollars to this program. I’m very hopeful, if Congress does consider additional coronavirus relief packages, that they would consider things like block grants, so each state could spend more of these dollars at food banks locally.

The USDA has made $3 billion available for acquisition of meat, dairy products, and specialty crops. A lot of those will be big bulk buys for the national food bank system, but I believe these state block grants could do a lot within the state and local economies to go directly to supporting small and mid-sized farmers who might not otherwise get to participate in the big commodity buy program.

The state has partnered with a number of farms and food organizations to make this program possible. Can you discuss their contributions?

Pacific Coast Producers is one of the country’s largest private-label food processors of vegetables and fruit. They are made up of several hundred small and mid-sized farmers of things like tomatoes, peaches, pears, and other crops. They made a truckload of fruit cup and tomato-product contributions to the food banks.

We have Sunkist, a citrus cooperative over 100 years old, made up of several thousand growers of oranges, lemons, and grapefruits. We’ve had Driscoll’s and Dairy Farmers of America, a large farmer-owned dairy cooperative, make contributions.

Foster Farms is our largest contributor. They have already made two or three separate contributions to food banks in the Central Valley, where most of their workforce is. They’ve donated well over a million pounds of poultry, and they’ve been a longtime partner and participant in the Farm to Family program.

And Grimmway Farms is a wonderful contributor to the food banks in the Kern County area. Their CEO, Jeff Huckaby—I reached out to him when we were trying to build up this program—said, “I’m going to give you six loads of carrots,” and he did: Within a week, we got baby carrots from Grimmway Farms.

We’ve talked a lot about farmers, but since you’re part of an inter-agency food supply task force, what are some of the other ways California is fighting food insecurity—for starters, the decision to allow CalFresh recipients to buy food from online retailers like Amazon and Walmart?

That was a waiver that was granted by USDA. It’s a very important program because of the shelter-in-place orders; even when some of those are lifted, vulnerable populations—especially our seniors—will still stay at home. So being able to use those benefits online and get their groceries delivered is huge.

I know that the goal of the Department of Social Services is to quickly expand the network to additional suppliers. Walmart and Amazon already have that infrastructure and relationship with USDA, and we want to expand to many more vendors.

In addition to CalFresh recipients, are children who receive free and reduced school meals also getting more help during the pandemic?

Our friends at the Department of Education sought a lot of waivers, and this one was to add [more Pandemic EBT (P-EBT) benefits] to the amount that children receiving free and reduced lunches were getting. On average, it’s up to $365 to be added onto a family’s EBT card to use for food purchases.

Governor Newsom recently announced a program in which restaurants provide vulnerable seniors with three meals a day. How did this idea come about?

With all the restaurants that have been shut down, they had to start laying off so much of their workforce, and that’s added significantly to the unemployment rolls. So, several Sacramento restaurants started doing family pilot meals to keep a few of their staff employed, and those were very popular. They understood the needs seniors have, so they started getting very creative and pitched this pilot program to us. It’s keeping the market going for these small-scale farmers who’ve just lost so much of their distribution program.

[Under the program,] preference will be given to restaurants using local, California-grown food. It’s a great program. It is temporary, and it is unique in that it’s the first time FEMA dollars could be used for reimbursement on these meals because of the unique circumstances seniors are put in because of COVID-19.

When we nourish our citizens to build their immune systems to be healthy, that’s got to be one of the most important things that we can do, and when we can purchase within our local communities that helps the community, it helps families, and it helps our economy rebound.