Op-ed: As Tyson Claims the Food Supply is Breaking, Its Workers Continue to Suffer | Civil Eats

Op-ed: As Tyson Claims the Food Supply is Breaking, Its Workers Continue to Suffer 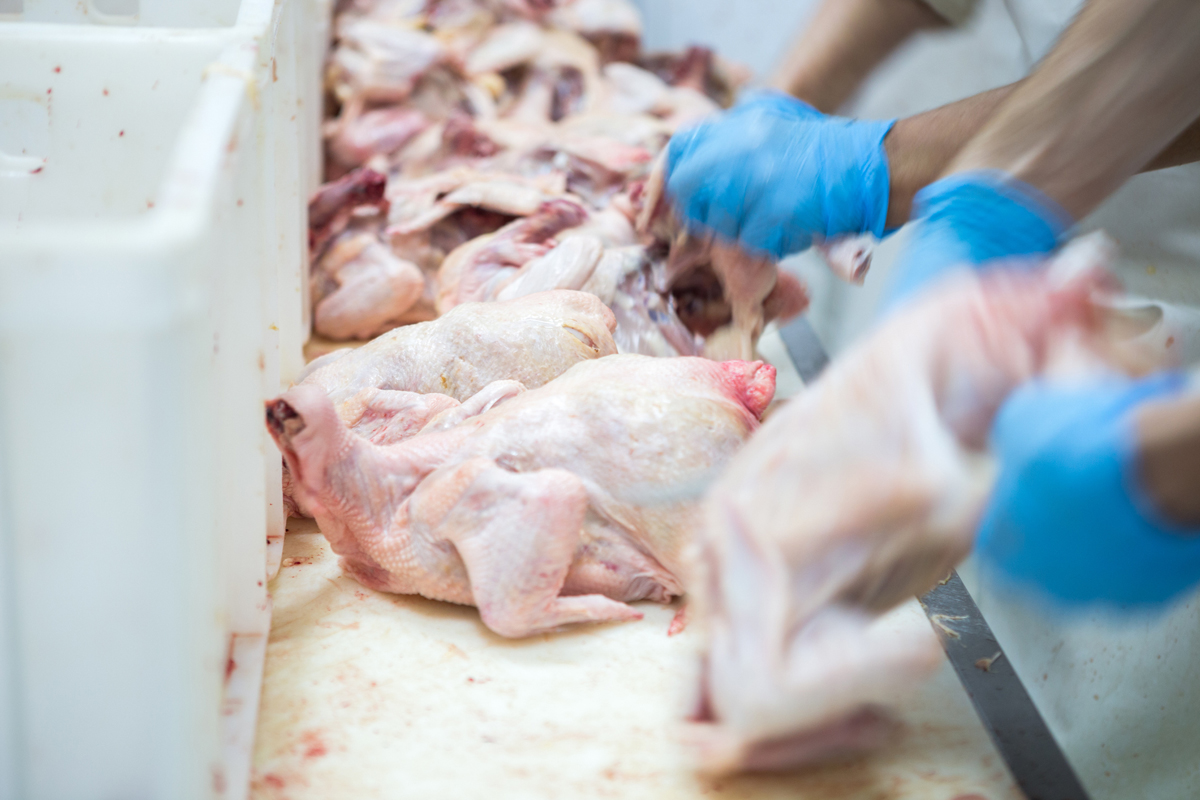 Between March and April of this year, as the coronavirus pandemic spread across the country, poultry processing volumes dropped by 12 percent. This news followed numerous outbreaks at meat processing plants, leading to 6,500 cases and 20 deaths among meatpacking workers, as well as widespread closures of facilities owned by JBS and Smithfield. And earlier this week, the CEO of Tyson Foods, John Tyson, placed full-page ads in the New York Times and Washington Post pleading that “the food supply chain is breaking” and that Tyson’s “plants must remain operational.”

Two days ago, in response to this meat-processing crisis, President Trump issued an executive order declaring that meatpacking plants must stay open during the COVID-19 pandemic.

I have been organizing workers at poultry processing plants in northwest Arkansas since 2014, and I can tell you there is more to this than a concern for your right to an uninterrupted supply of chicken tenders, bacon, and T-bone steaks.

To hear John Tyson, head of the nation’s second-largest poultry processing company, tell it, nothing matters more to the company than the health and safety of their “team members.” Tyson Foods has the resources to fund a public relations blitz and to cajole the president of the United States. But let me tell you the story from the poultry line workers’ perspective.

It looks like this: you earn $12 an hour for a job that entails processing 21,000 chickens a day (120 birds per minute). You stand shoulder to shoulder with fellow workers, and for eight hours, must keep your focus on the rapidly moving line in order to both keep up as well as avoid serious injury. If you succeed with that, one of the rewards of your job is repetitive motion injury.

Tyson writes that workers show up each day to “feed our country.” That certainly sounds noble, but there isn’t much dignity in having to work in diapers due to restricted bathroom breaks (against OSHA regulations) and for fear of earning demerits—too many of which could cost you your job. Having been declared “essential,” a common sentiment among these workers is that they wish they were treated better than the chickens they process. And this was before COVID-19. 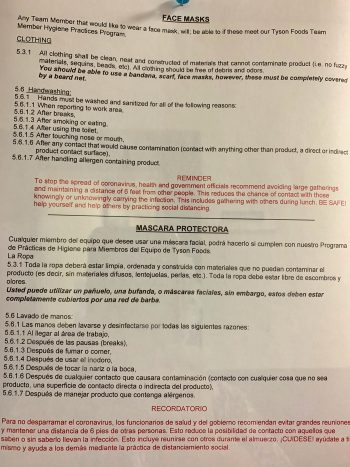 A sign at a Tyson foods plant discussing rules around any personal protective equipment that poultry workers choose to wear. (Photo courtesy of Venceremos)

When the pandemic struck, Tyson didn’t take action to prevent the spread of the virus until it was too late, spelling all too clearly how little concern the company has for its workers. The first case of COVID-19 in the U.S. occurred on January 19. Workers have told me that it wasn’t until April 23, after more than 5,000 cases had developed among meat processing workers, that Tyson finally equipped its line workers with personal protective equipment. Even then, it is clear the company wasn’t spurred to action over concern for its “team members.” Over that same span of time, the company’s share value dropped by a third.

Before, whenever journalists and government VIPs would show up to tour the facilities, the company would slow its line speeds, the equipment would have been recently deep-cleaned, and visitors would get a completely different experience than what the workers endure daily. In spite of CDC guidelines to distance workers and install physical barriers between them, the workers I’ve spoken to say that Tyson complied incompletely or not at all.

Tyson has proclaimed that all levels of government “must unite to allow our team members to work in safety without fear, panic, or worry.” But fear for job security, panic about infecting loved ones, and worry about losing one’s life for a job are precisely what Tyson’s policies are generating among their workers.

As a poultry line worker, you fear losing your job—and also reporting for your job.

In spite of the company’s public relations claims, the workers who I’ve seen become infected have not been entitled to pay during quarantine. As a poultry line worker, you fear both losing your job as well as reporting for your job. It is no surprise that the nation’s worst hotspots for COVID-19 are meat-packing towns. The industry has been lobbying for years for rollbacks of safety provisions that have made working conditions more hazardous due to increased line speeds, greater crowding among workers, and reduced inspections.

Instead, we as a nation need to rethink the inhumane working conditions and expectations in these plants. During the pandemic, workstations must be reduced in number so that they can be spaced according to CDC guidelines. When a single infection occurs, the plant where it occurred should be closed, deep cleaned, and workers in contact with the infected worker must be paid while they are under quarantine. They must all have the option to return to their jobs when they are healthy and a disinfected plant is ready to reopen.

This will reduce processing volume, but this is how you show that you truly value workers over profits. In the same way that we shouldn’t thank our military service members “for their service,” and then send them to perform their duties without proper equipment, we should do no less for the nation’s “essential” food chain workers. This is how we keep the food chain operational; meanwhile, business as usual shows just how the entire food system will be compromised if workers continue to fall on the job.

More importantly, now that the pandemic has shone a bright light on the exploitative nature of our food system, we can rise above accepting practices that should embarrass anyone living in the 21st century. We should provide humane working conditions, necessary protective equipment, enforcement of safety standards, paid sick leave, and affordable health care for these essential workers—and all workers.

President Trump was very clear that his executive order was to protect the industry from “legal liability if they are sued by employees who contract coronavirus while on the job.” Sadly, this demonstrates that the president and the industry view their workers as necessary nuisances and—worse—as expendable.

By keeping processing plants open, ignoring some or all worker-protection requirements, and expecting new workers to continuously replace those infected and killed by a disease whose spread we know how to prevent, it is clear that the industry and the president prefer to sacrifice worker lives for the sake of the bottom line.

Magaly Licolly is the co-founder of Venerceremos in Springdale, Arkansas. Read more >