Black-Owned Restaurants in Detroit Are Hard Hit by the Pandemic

After decades of structural racism, the city’s Black restaurateurs are facing both health and economic crises. 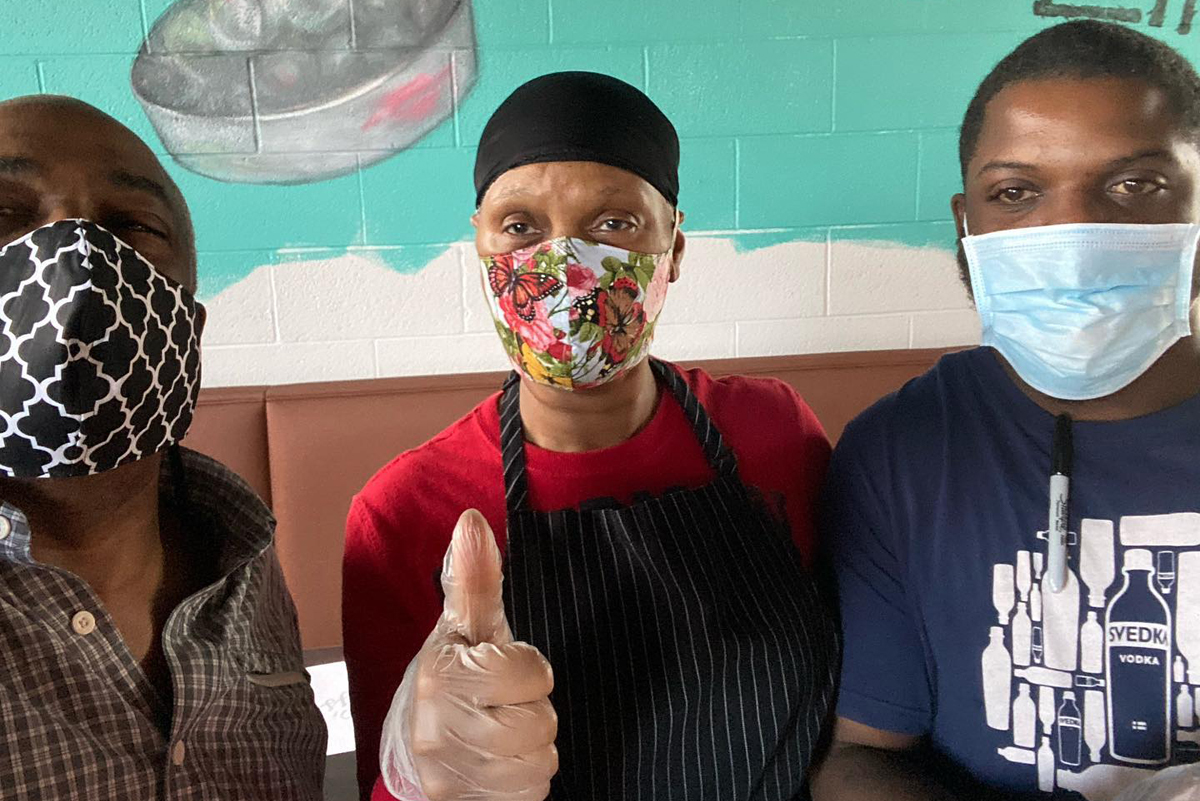 In late February, Lester Gouvia was looking forward to transitioning out of the slow season and seeing business pick up again. The owner of Norma G’s, a full-service Caribbean restaurant with 113 seats, a full bar, a menu that includes beef patties, curry goat, and jerk chicken, Gouvia says things were on track at the beginning of March. But in the second week of March, as coverage of the coronavirus picked up and Metro Detroit confirmed its first two cases, Gouvia noticed a sudden slowdown.

“Normally, Thursday, Friday, and Saturday are busy for us,” he says. “When I saw that Thursday slow-down, I was like, ‘OK, there’s a problem there.’”

Gouvia’s suspicion was confirmed the next day when 90 percent of the restaurant’s revenue dropped. Three days later, Governor Gretchen Whitmer issued an executive order closing public establishments to prevent the spread of the virus. For restaurateurs with a dine-in model, that meant making an urgent, difficult decision: convert to carry-out and delivery or close the doors completely. Gouvia chose carryout.

“In the Caribbean, food and drink is an important part of our culture,” Gouvia says. “I wanted people to come and have an experience.”

As the first sit-down restaurant to open in Detroit’s Jefferson Chalmers neighborhood in 30 years, Norma G’s was also a part of revitalization efforts for the east side neighborhood.

For all these reasons, Gouvia found the switch to carryout especially challenging. But, for now, it’s keeping the doors open. 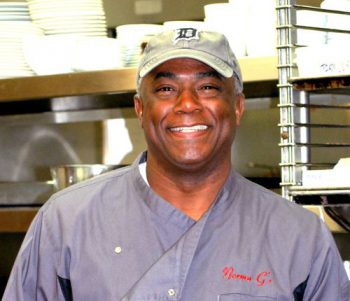 “I look around by myself and I think, ‘All the work I put in, it wasn’t for this.’ But in order to keep my brand and stay in business so people don’t lose track of me, this is what I have to do.”

The coronavirus has hit the Black population in Detroit especially hard—in health as well as economic impacts—but that’s not where the racial inequity ends. While many Black restaurateurs like Gouvia are hanging on, Devita Davison, executive director of the FoodLab, an organization that provides incubator space and other support for food businesses in Detroit, is concerned about what’s to come.

Black restaurateurs have long struggled with the racist structure of the food world, and that is most evident in the vast differences they often experience when it comes accessing capital. Therefore, they are often less equipped to weather a storm this big. And Detroit, which has seen a boom in restaurant culture in its downtown area in recent years, is a stark example of those disparities.

“Many Black businesses don’t have the agility to pivot to a different business model,” says Davison. For that reason, she worries they may be less likely to see their restaurants standing after the economy reopens.

Like Gouvia, Nya Marshall decided to invest in the under-resourced east side of the city when she opened Ivy Kitchen and Cocktails at the end of 2019. She wanted to hire folks from the neighborhood, and she was driven by feedback from neighbors who wanted to see a fine dining restaurant in the East English Village neighborhood. The 60-seat Ivy Kitchen offered small plates such as buffalo cauliflower and mezcal wings and entrees like farro etouffee and short rib stroganoff. There was also a 12-seat bar. 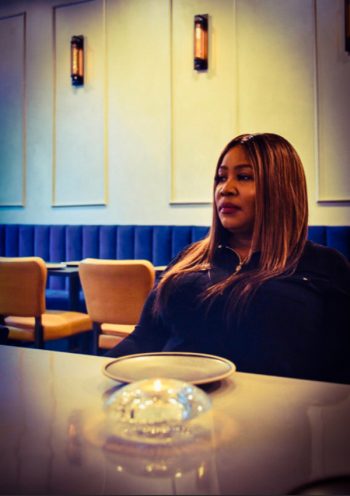 “We are offering an elevated dining experience to Detroiters because I felt like we were left out of that experience from a cultural perspective,” says Marshall.

“The social component of the dining experience was what the [business] model was predicated on,” she adds. “Carry out and delivery was never a component.”

Marshall hadn’t been open for 90 days when the coronavirus forced her model to change. The business went from serving what Marshall estimates to be 800-1,000 guests a week to between 30 and 50. She had to furlough most of her employees, going from a staff of more than 20 to just three people.

At first, she maintained her normal business hours, but it was so slow that she cut down to Friday, Saturday, and Sunday. Her menu changed, too, converted into what Marshall describes as “comfort and family style” meals such as fried chicken with roasted red mashed potatoes.

A Beacon of Light

Since mid-March, Detroit has become a hotspot for the coronavirus, which is disproportionately impacting the Black community all over the country. The city’s population is nearly 80 percent Black, and that group accounts for approximately 65 percent of confirmed cases and 77 percent of deaths. The three counties that make up metro Detroit account for a significant number—80 percent—of the state’s cases.

Now, restaurateurs like Gouvia and Marshall, who chose to open their business in neighborhoods that have long been disinvested in, are operating in the epicenter of the virus. So, there’s also an added risk to their staff members.

In the second week of March, Sam Van Buren, co-owner of Detroit Soul—a counter service restaurant offering soul food classics with a healthier twist—fell ill. He didn’t know whether or not he had the virus. Van Buren’s wife ended up staying home with him.

The restaurant was left “kind of flying on one engine,” says co-owner Jerome Brown, whose wife was the only cook remaining.

Eventually, Van Buren was tested, and his results came back negative for the coronavirus. Still, the co-owners had to decide how to proceed in the current environment. They didn’t have to alter their business model but did see a small decline in business, and decided to stay open for their community.

“Our core mission kicked in [because] we wanted to be a beacon of light in the neighborhood from a health and economic perspective,” Brown explains.

They retooled the menu by giving customers the chance to by larger portions at a time, and they only allow five customers in the building at a time. But they’ve kept the days and hours of operation the same, for the sake of maintaining a sense of normalcy for their customers and their employees.

“We want to be a symbol of stability in the neighborhood,” Brown says. He adds that Detroit Soul wants to be healthier option against fast food options that “contribute to the continual decline of health within our ethnic group.”

Black Business Owners at a Disadvantage

FoodLab’s Davison is monitoring the impact of the virus on the restaurant industry. She says Black-owned business and businesses owned by other people of color are being hit the hardest.

Not only has the coronavirus brought to the forefront the racial, gender, and economic disparities in the restaurant industry, it’s exacerbating them. High-profile restauranteurs and hospitality groups backed by wealthy investors are leveraging public relations firms to frame them as the heroes on the frontlines to save the industry, despite closing restaurants, furloughing and laying off workers.

“It may seem absurd that the vast and varied ecosystem of American restaurants are represented by celebrity chefs and fast food executives who are exclusively male and overwhelmingly white, but not really when you understand that in this capitalist system resources flow in the direction of power,” explains Davison.

“Where are the women? Where are the Black people? Where are the queer [and] nonbinary folks?” Davison asks. “Who will advocate for immigrant and undocumented workers? The restaurant industry is nothing without all of these people, yet all you have in the White House economic group are white men?”

The latest blow to neighborhood restaurants came from the Small Business Administration’s $349 billion Paycheck Protection Program (PPP), created to offer businesses with fewer than 500 employees a loan to cover payroll costs for eight weeks. Many small businesses scrambled to apply to the first round of loans only to learn that but large restaurant groups were awarded with multi-million-dollar loans. The chains Ruth’s Chris Steak House, Potbelly, and Shake Shack have since announced plans to return the money. And while a second round of loans opened on Monday, Ashley Harrington, of the Center for Responsible Lending told CBS News, “that upwards of 90 percent of businesses owned by people of color have been, or will likely be, shut out of the Paycheck Protection Program.”

In Detroit, dozens of restaurants have set up GoFundMe campaigns to raise money to help their employees. Last month TechTown Detroit, a tech startup and local business incubator and accelerator, offered an emergency fund to provide qualifying small businesses with grants worth up to $5,000. The Detroit Economic Growth Corporation, in partnership with the City of Detroit, recently created a $3.1 million COVID-19 for eligible small businesses ranging from $2,500 up to $10,000.

Marshall applied for all of these forms of suport, but has yet to receive any funding. Gouvia applied for the TechTown and DEGC grants and was awarded both. Brown applied for four grants and loans, including DEGC and PPP, which he was approved for, but is waiting for funds.

Davison says that Black-owned businesses are often missing a component that could help them to weather this storm: a marketing and communications strategy. 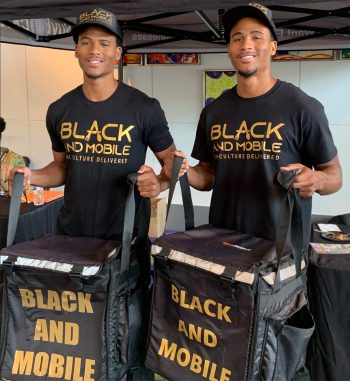 Marshall, who does her own PR agrees. “If these stories and initiatives aren’t being pushed, if no one is advocating on your behalf, people are not aware that you exist,” she says.

While many restaurants have relied on delivery apps like Grubhub and UberEats, much has been reported on their predatory practices, squeezing neighborhood restaurants out of 30 percent of commission from each order (Neither Gouvia nor Marshall use them for that reason). However Black and Mobile, a black-owned food delivery service launched in February 2019 in Philadelphia has recently expanded to Detroit, is working with up to 20 Black-owned restaurants from midtown, as well as the east and west sides of the city.

“When we get through this, I’m judging our impact and our successes on how many Black and brown entrepreneurs’ doors were we able to keep open,” she says. “And then we can start having conversations about how we help them to recover and how we help them to become resilient.”

Brittany Hutson is a Detroit-based writer and freelance journalist who has covered small business, entrepreneurship, personal finance, real estate, higher education, and community development for publications such as Black Enterprise magazine, Essence, The Wall Street Journal, Shelterforce, and others. Her food writing covers the intersections of entrepreneurship, culture, and community, and has appeared in Tostada Magazine and Edible Brooklyn. Her writing can also be found at her personal blog, Fed & Bougie. Read more >