Change to Federal Rule Could Expose More Farmworkers to Pesticides

The EPA has proposed dropping a rule requiring safety zones when spraying pesticides, just as farmworkers are deemed 'essential' during the pandemic. 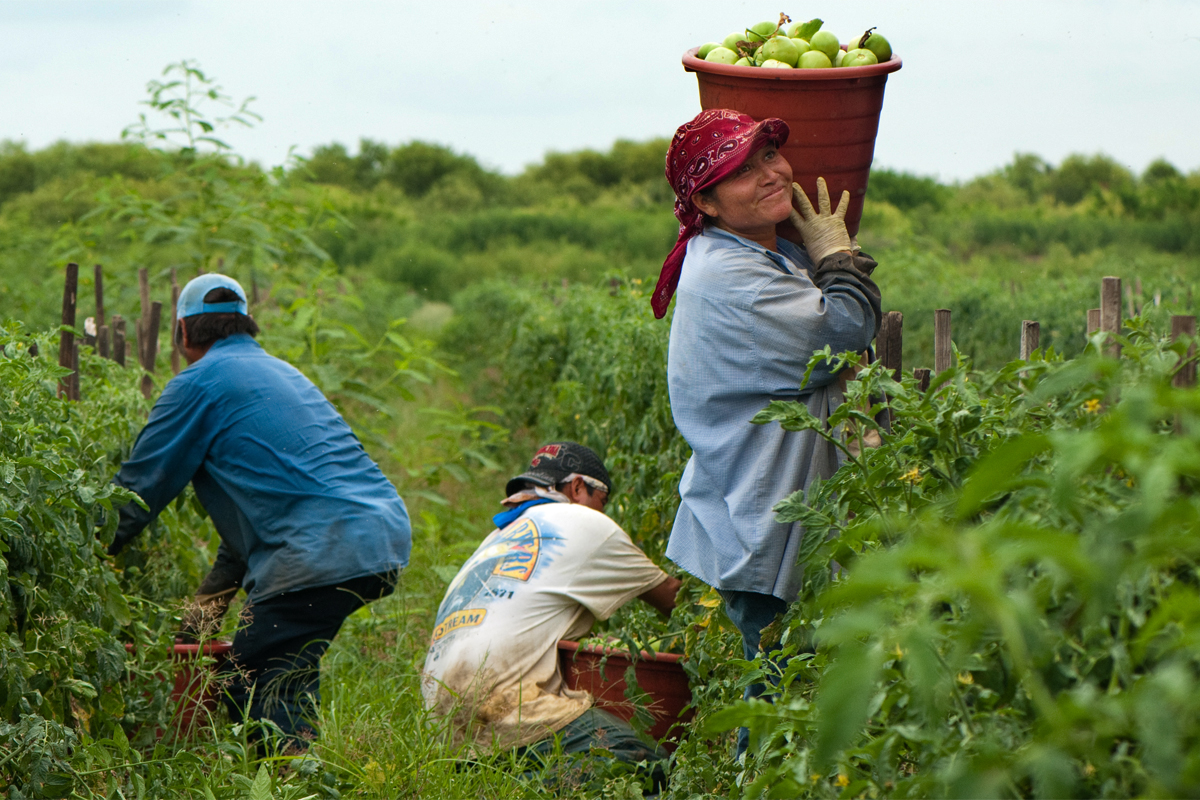 For Rogelina Sánchez, that morning last June began much like hundreds of other mornings had begun in the fields of California’s Central Valley. There was the slowly rising heat, the crisp rustle of leaves, the snatches of conversation as people bent to their work.

On this day in the vineyard just west of the town of Dinuba, the grapes grew so thick and tall that Sánchez, 54, says she couldn’t see beyond the row where she was pruning.

So, she had no warning before the wave of pesticides hit.

Suddenly, her throat tightened, her head started pounding, and there was a bitter taste in her mouth. Moments later, she says, she felt like someone had slugged her in the stomach and she vomited. All around her, people were doing the same.

Investigators would later report that someone in a peach orchard just to the south of the vineyard was spraying a combination of Onager Optek, which kills mites; an insecticide called Reaper Clearform; and Narrow Range 415 Spray Oil, another insecticide.

Authorities say 52 people were exposed and six were taken to the hospital, one of whom was kept overnight for shortness of breath. The orchard company has been fined and is appealing.

Sánchez says the current rules governing pesticide use failed to protect her that day. And now that farmworkers have been deemed essential workers during the coronavirus pandemic, it’s increasingly clear that their safety is key to maintaining a working food system.

“What happened to me could have happened to anybody,” she says. “We need more regulation, not less.”

Rogelia Sánchez in the field where she was sprayed. (Photo by Chris Richard)

Instead, prompted by President Trump’s orders to reduce regulations, the U.S. Environmental Protection Agency (EPA) has proposed loosening a key Obama-era rule that was meant to prevent farmworker exposure to pesticides. The agency stopped accepting comments from the public on the proposed change at the end of January after receiving more than 13,000. An agency spokesman says any revisions to the rule should be finished by the end of the year.

The Application Exclusion Zone (AEZ) rule, set in 2015, established the principal that anyone applying pesticides must protect everyone within a safety zone, whether the people are on the farm or off the property.

Buffers in the current rule vary between 25 and 100 feet, depending on how close spraying is to the ground, what the substance is, and how likely it is to drift. If a person applying pesticides sees people inside that zone, spraying must pause until they’re out of harm’s way.

Currently, those limits apply across property lines. Some farmers complain they can’t control the movements of people who aren’t on their land, and adhering to the exclusion zones causes costly delays. In response, the EPA has proposed ending each AEZs at the edge of farms.

“To roll back this rule is essentially a decision not to find out who’s been exposed [to pesticides],” said Margaret Reeves, senior scientist at advocacy organization Pesticide Action Network North America (PAN).

Al Krupski, a fourth-generation farmer In Suffolk County, New York, says the proposed change would eliminate his worry that he might someday have to stop in the spraying simply because somebody drives by his 50 acres of melons and vegetables. Apart from that, he says he doubts the rule change will alter the way he farms.

“I am so conscious of being a good neighbor, because whether the law’s on my side or not, you want to be able to wave to people,” he said. “Like, I would never spray on a Sunday afternoon when people are in their back yards, even though legally I could.”

Those who oppose loosening the rules say many agricultural operations aren’t so neighborly.

“I am conscious of being a good neighbor, because whether the law’s on my side or not, you want to be able to wave to people”

The EPA has another long-established rule, commonly referred to as “do not contact,” that requires anyone using pesticides to guard against exposing others. The rules is included in the instructions that ship with the pesticides. An EPA spokesman says that’s sufficient to protect people outside a farm’s boundaries.

PAN’s Reeves says that while the exclusion zone rule focuses on preventing harm to farmworkers, relying solely on “do not contact” imposes a heavy burden of proof on farmworkers after an injury or illness.

“How do you demonstrate contact? Well, you can’t do it unless you’re actually made ill and go to a doctor who can document that right away,” she said. “Theoretically, if you were exposed, you could take off an item of clothing, put it in a plastic bag, mark it with the day, time, and place and put it in the freezer, then pay for a lab to do the analysis. No way.”

Even if a farmworker consults a doctor after exposure, the physician may not recognize what’s happened, said Amy Liebman, director of environmental and occupational health at Migrant Clinicians Network.

For many years, Liebman directed a national program to train doctors in community health centers to recognize those signs. Doctors reported receiving an average of seven hours of training in that area prior to the seminars, Liebman said.

Beyond such obstacles to identifying individual cases of harm, records throw doubt on how broadly “do not contact” has protected people. For instance, in 2015, explaining the agency’s support at the time for the AEZ, the EPA declared “do not contact” too weak a standard.

The citations for its argument include a 2011 study by the National Institute of Environmental Health Sciences that found that pesticide drift in agriculture is common, and that farmworkers face an incidence of exposure-related illness 145 times higher than other workers. The same study noted that pesticides often drifted beyond the “do not contact” instructions printed on containers.

Further, California’s Pesticide Illness Surveillance Program regularly records drift as a leading cause of exposure among farmworkers. The most recent report available, for 2016, attributes 64 percent of exposure cases to that source.

After the exposure last June, Rogelina Sánchez said she was examined and released from the hospital. Nine months later, she says her mouth is always dry, her hands are often numb, and she has a nagging dry cough. She says her doctor hasn’t been able to explain her symptoms.

Her experience in the vineyard may match the kind of inadvertent exposure to pesticides an EPA spokesman says the agency would have trouble evaluating.

“It became clear to EPA there were concerns about agricultural employers being able to comply with and regulators being able to enforce the AEZ. For example, there are situations where people may enter or are already in the AEZ, but off the establishment, yet the applicator cannot see the persons due to some obstruction” the spokesperson wrote in a recent email. “In such a case, it may be difficult to prove the applicator saw persons in the AEZ.”

To Sánchez, that’s an argument for more stringent regulations, not fewer.

“I have to know where they’re spraying, and I have to be able to get away from them when they are,” she said. “I don’t see why, when I’m working, I have to just hope they don’t start spraying in a field across the road. It’s very unjust.” 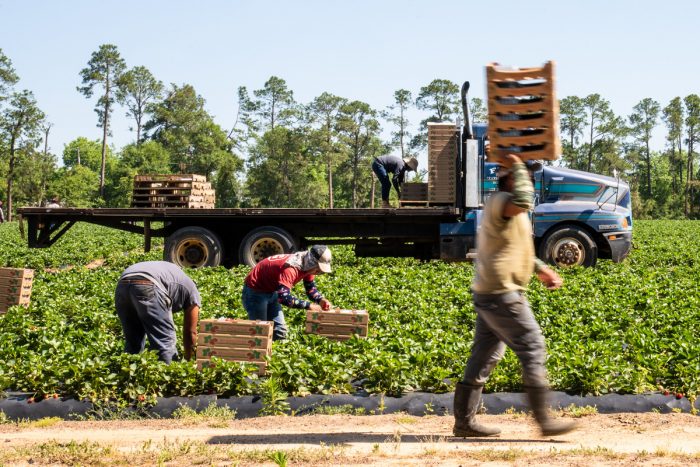 To increase farmworker protections, some states seek to supplement the federal rules. California, for instance, has its own exclusion zone that matches the EPA’s current buffers and it would take effect there if the federal standard were weakened, said Charlotte Fadipe, a spokeswoman for the state’s Department of Pesticide Regulation.

Meanwhile, agriculture officials in Colorado, Georgia, Indiana, and North Carolina have all issued statements opposing the AEZ, and the National Association of State Departments of Agriculture (NASDA) added its endorsement to an American Farm Bureau Federation argument against the rule.

The NASDA also mirrored the Federation’s language in its own letter.

“Often, the departments of agriculture in states are very much influenced by the farm bureaus and other organizations like that,” said Ellen Widess, who led California’s workplace safety agency, California Division of Occupational Health and Safety (Cal/OSHA), from 2011 to 2013.

“A state regulator or an ag department is supposed to ensure the safe use of pesticides, but also to insure the public health,” Widess added. “This is like any other industry. The emissions don’t stop at the factory gate, and the industry is responsible for the harm it might cause beyond its property line.”

In an email, NASDA CEO Barb Glenn said it’s her organization’s job to assure that federal law and regulations are workable for farmers and ranchers. “We work with coalitions and impacted stakeholders to seek a unified position on various food and agriculture issues so we communicate more effectively with the federal government,” she wrote.

Allison Crittenden, the Federation’s director of congressional relations, agreed that such coordination is appropriate.

“I think the ag industry benefits when both the regulated and the regulators are able to arrive at the same conclusions,” she said.

To Iris Figueroa, senior staff attorney at Farmworker Justice, that kind of consensus between industry groups and regulators is all too familiar.

“This is what we see a lot of the time,” she said. “Pesticide manufacturers, farm industry groups, state departments of agriculture, those are the groups that have meetings and visits from the EPA.… There’s not the same level of coordination with farmworkers.”

Other farmworker advocates shared Figueroa’s criticism. Leydy Rangel of the UFW Foundation pointed out that in following Trump’s executive order, the EPA failed to comply with another long-established rule: Bill Clinton’s order that called on the agency to consider the impact of its policies on minority and low-income populations.

“If the people on the ground who experience exposure don’t have the ear of the agency in the same way, that’s absolutely problematic for how this rule is going to be shaped,” Figueroa said.