Gardening Is Important, But Seed Saving Is Crucial | Civil Eats 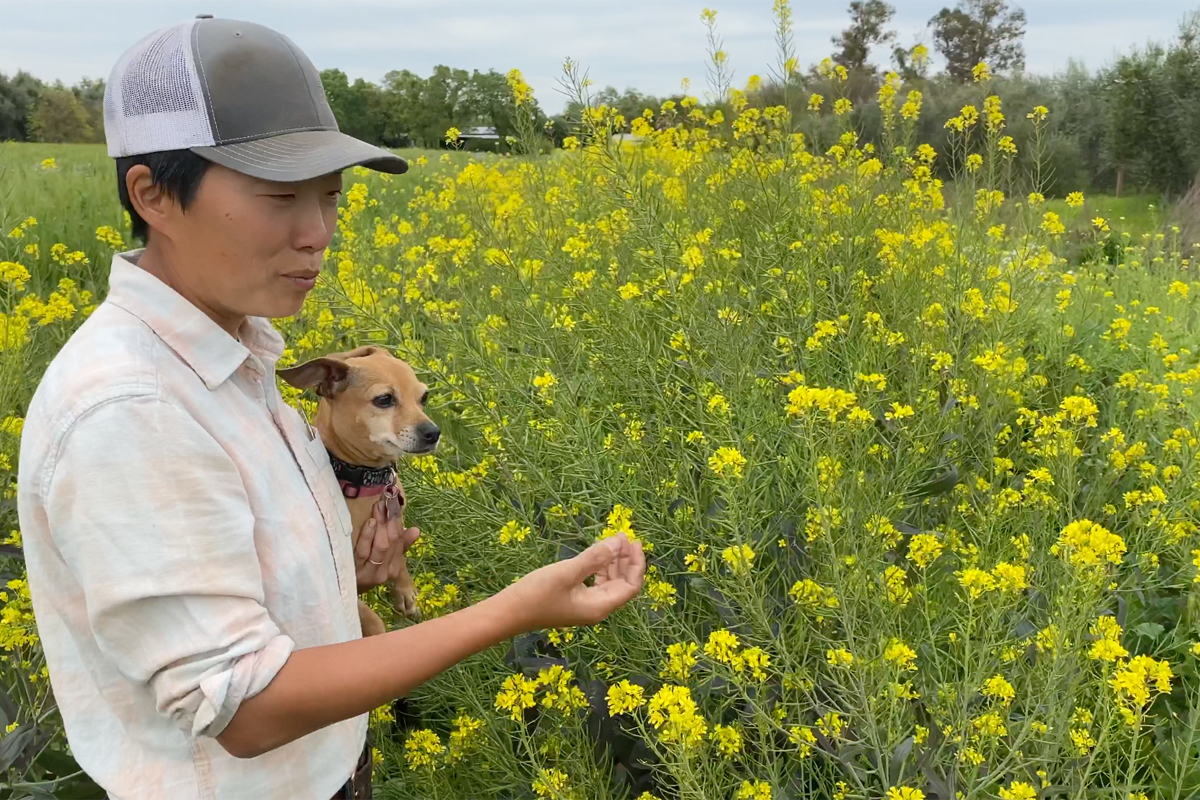 Gardening Is Important, But Seed Saving Is Crucial

Experts say saving seeds is an important piece of the food sovereignty puzzle. Plus: Video tips to ensure next year’s crop.

The U.S. is in the midst of a gardening renaissance. As the coronavirus pandemic prompts big questions about the future of our food system, people everywhere are buying up seeds, pulling up lawns, building raised beds, and flocking to learn from Master Gardeners.

Most of these new and seasoned gardeners are making careful decisions about what type of plants they want to grow and how to organize the beds, but it’s also a good time to consider another, perhaps more important aspect of food sovereignty: what kind of seeds you’re planting and whether or not you’ll be able to save and share them next year.

To save seeds is to preserve food culture. Heirloom crops wouldn’t exist if it weren’t for the gardeners who meticulously grew and saved seeds including the Brandywine tomato, Purple Top White Globe turnip, and many other varieties, passing them on to future generations.

In recent years, many Indigenous groups have also used seed saving as a way to preserve their cultures—as well as important crops like Cherokee White Eagle Corn, the Trail of Tears Bean, and Candy Roaster Squash for future generations.

Perhaps most important in this moment, saving (and sharing) seeds also makes sense economically. “People are having a hard time right now financially,” says Philip Kauth, director of preservation for Seed Savers Exchange. But saving seeds is free and many seed libraries, seed exchanges, and other groups offer packets of seeds at prices that are lower than those offered by retail seed companies. “There are so many economical aspects to it. You don’t have to buy seeds every year and you don’t have to buy produce, depending on the time of the year.” 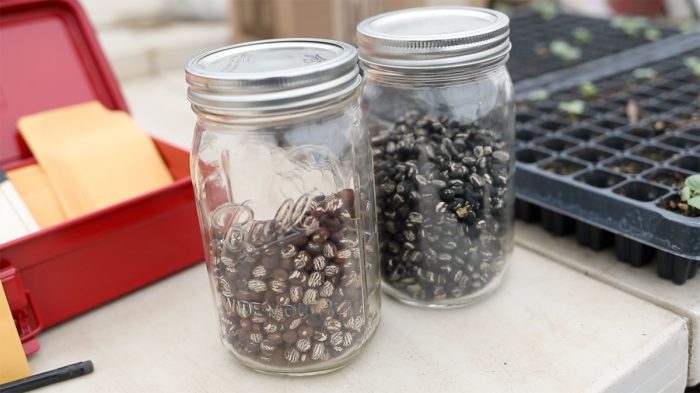 “In the 1930s and 40s, it was popular for home gardeners to save their own seeds,” says Fern Marshall Bradley, author of Saving Vegetable Seeds and an editor at Chelsea Green Publishing. The practice died out but is being revived again by gardeners who want more control (and creativity) with their crops. And it’s easier than it seems to get started. If you’re growing beans, tomatoes, squash, or similar plants you’re already growing seeds. “Why not just take the extra step of saving them?” Bradley says.

Seeds are either open-pollinated or hybrids. The latter are often bred for specific traits like drought resistance or large yields, but you can’t save the seeds. Unlike open-pollinated seeds which can be collected and replanted year after year to get the same tomatoes or lettuce as the year before, hybrids are often patented and have been bred to grow just once. Technically, you can save the seeds, but they won’t don’t grow true to type, meaning you’re likely a plant that produces very different food the second time around (if the seeds grow at all).

Beginning with the 1970 Plant Variety Protection Act (PVPA), which granted companies a certificate ownership of seeds, and the 1980 Supreme Court case Diamond v. Chakrabarty, which allowed seeds full patent protection, seed ownership began to look more like intellectual property law. In many cases, farmers were no longer allowed to save seeds and breeders couldn’t use patented seeds to breed new plant varieties either. Today, the bulk of seed breeding has moved from public universities to private laboratories and four companies control more than 60 percent of global seed sales.

“When there are only two [companies] you can go to for your seed, you’ve got problems.”

“Farmers no longer buy seeds,” says Jack Kloppenburg, a sociologist and author of First the Seed. “They rent that seed from Monsanto or Syngenta,” he explains referring to the trend that has overtaken many commodity crops like corn, soy, or cotton. Rather than growing a number of open-pollinated seeds that are bred to thrive in a particular climate or soil conditions, farmers throughout the world are turning to a few conglomerates to buy the same seeds and grow the same cash crops as the rest of the world.

“When there are only two places you can go for your seed as a farmer,” Kloppenburg says, “you’ve got problems.” He worries that if current trends continue, even more seeds will wind up under patent.

On the other end of the spectrum, a small group of seed breeders are working to expand the number of plant varieties that can be freely saved and shared. The Open Source Seed Initiative (OSSI) asks plant breeders working with open-pollinated varieties to pledge not to restrict others’ use of the seeds they breed (or their derivatives) by patents or legal restrictions.

Seed companies can still sell the seeds (and the OSSI site includes a long list of open source varieties with links to the companies that sell them) researchers can still use the genetic material to create new varieties; they just can’t restrict other companies and researchers from doing the same. The renewed popularity of open source seeds, independent seed companies, seed libraries, and other exchanges means that it’s getting easier to find seeds adapted for local conditions. But you still won’t find them in the plant section of Home Depot—or most other mainstream plant stores.

“If we have hyper-consolidation of all these [agricultural] industries and our farms are getting bigger and seed companies are getting bigger, I think people have less control over their food system,” says Claire Luby, co-founder of OSSI. “People are starting to recognize the role seeds play in food sovereignty, but it’s been slower than the local food movement.” Having seeds adapted for a local environment is particularly important in an era of climate change. That doesn’t happen if one [laboratory] is breeding “carrots for the entire country” as Luby says.

“It’s a fun thing to see people breeding [plants] for their community in the mountains or the high desert or really high conditions,” she says. “Sure, this tomato won’t be grown everywhere but that’s not the point. It does well in that one place.”

However, “you don’t need the breeder’s long-term view” to be good at seed saving, Bradley says. Even if someone isn’t trying to become a plant breeder, by saving seeds from plants that have survived (and thrived) enough at the end of the season to produce seeds, there’s already some selection taking place. “If you keep saving seeds from healthy plants, each year those seeds will give you plants that are better adapted to your conditions,” she says.

Even if they don’t want to counter-balance the global seed giants, some farmers have practical reasons to work with open-pollinated varieties and save their own seed. Kristyn Leach is the owner of the two-acre Namu Farm in Winters, California, which supplies produce to restaurant group Namu Gaji as well as other local establishments. When Leach started her farm in 2011, she quickly realized that most commercially available seeds didn’t work for the kind of farm she wanted to run.

“My aim has always been focused on no-till and minimum inputs,” Leach says, referring to her approach to using fertilizer, pesticides, and even water. Seeds might be labeled “high yield,” but farmers will only see those yields if the use of heavy irrigation which, in California, is particularly expensive for farmers and the environment.

Leach had previous experience breeding plants while working for a tomato breeder and decided to put those skills to use saving seed and selecting for crops that are optimal for her farm’s conditions. She set aside a few rows on her farm for breeding, stressing the plants by giving them less fertilizer or water and seeing which ones stayed alive. 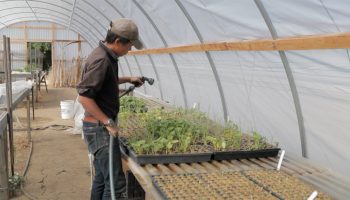 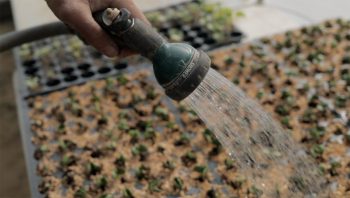 “Basically you’re attempting to kill a percentage of your plants in the hopes that what remains has the genetics to withstand [those conditions],” she explains.

Plant breeding and seed saving are not common practices among farmers, who look at the economics of buying a seeds versus the land and time needed to grow extra plants to save their own. “Seed is not an expensive line-item but fertility and water are,” Leach explains. “It saves money downstream.” One project she undertook with eggplant took six years to complete. But at the end of that time, Leach went from needing to water the crop three hours every other day to one and a half hours every week.

The Seed Savers Exchange website suggests people pay attention to how often a given crop sets seed (in other words, whether a plant is biennial, annual, or perennial), plot the garden to avoid unwanted cross-pollination from similar plants, and that gardeners grow enough to be able to both harvest plants for food and save seed as well as getting more genetic diversity into the saved seeds.

Kauth recommends people start with a beefsteak tomatoes or beans because the seeds are large and the plants are familiar to most gardeners. Lettuce and other greens can be easy to save seed from too since the plants grow so quickly. There are numerous books on seed saving (Seed to Seed by Suzanne Ashworth is one well-regarded title recommended by Luby) as well as online resources for anyone who wants to get started.

The hope is that as more seeds go open-source it will help lead to a boom in the biodiversity of seeds again and leave future generations with more varieties of plants and food to enjoy (and seeds to save). Seed Savers Exchange sells some open-source seeds in addition to rare and heirloom varieties, houses the largest nongovernmental seed bank in the U.S., and even hosts an in-person seed exchange where people can swap seeds with strangers from all over. (There’s an online seed saving and seed swapping exchange as well.)

“We want people to save the seeds they get from us,” Kauth says. “If you buy seeds a couple times in your gardening life from us, that’s perfectly fine. Save those seeds and share them with friends and family next year.” At a time when seeds are hard to come by and communal anything feels more vital than ever, seed saving seems to transcend the many political and practical motivations behind it.

Coronavirus may not impact spring seed orders in 2021, but there are plenty of other potential interruptions to seed supply from a bad harvest to a storm. “Saving seed guarantees you’ve got them and it can be fun to trade them with other people,” says Bradley.

She believes that gardening with seed saving in mind can also make you a better grower. You need healthy plants at the end of the season which means you might pay more attention to how their plants are growing. A packet of seeds might seem relatively inexpensive but the feeling of saving more than enough for next year’s harvest from a single tomato is priceless.