With Their Livelihoods Under Threat, Livestock Producers Pin their Hopes on Labeling | Civil Eats

With Their Livelihoods Under Threat, Livestock Producers Pin their Hopes on Labeling

From country of origin to “Product of USA” labels, producers have long sought to distinguish American beef from imports. Upcoming USDA rulemaking is unlikely to resolve the issue. 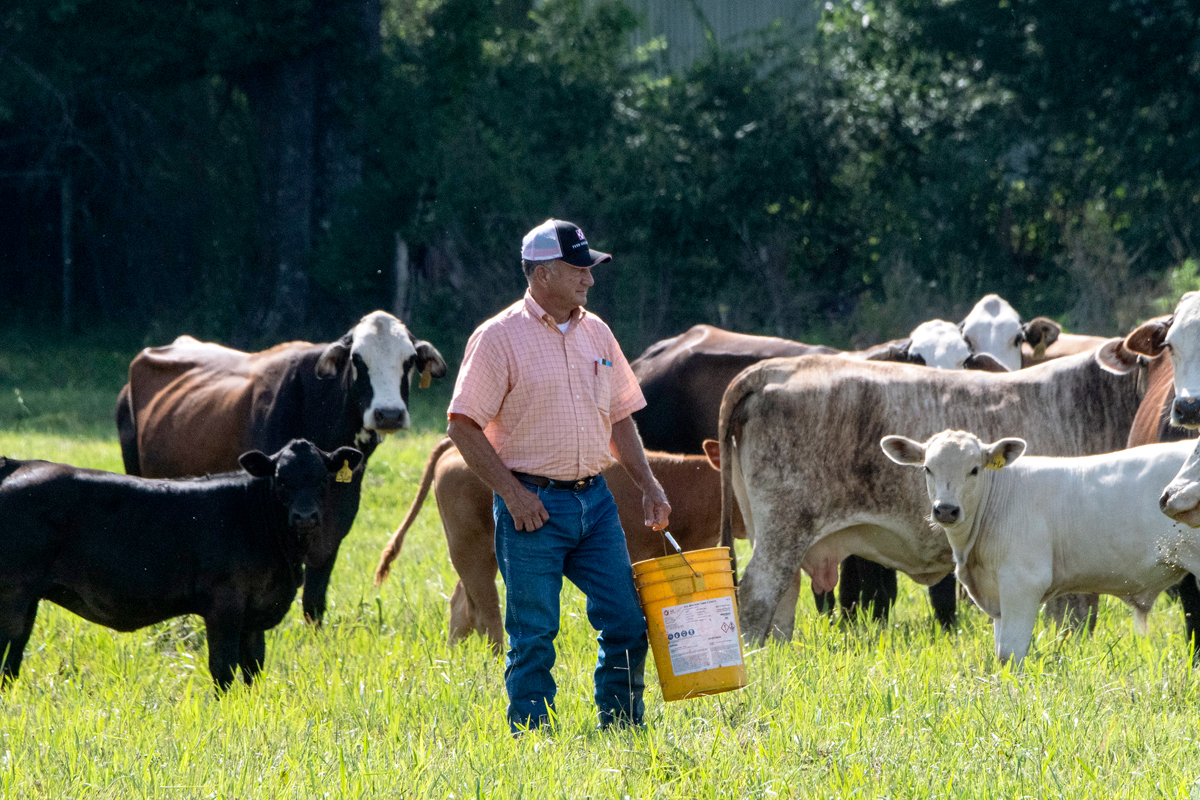 In a letter dated March 18, Bill Bullard asked President Trump for help, on behalf of U.S. cattle farmers and ranchers. “America faces a potentially catastrophic disease-related crisis. You are taking unprecedented action to head it off,” the CEO of R-CALF USA wrote. “America’s largest segment of agriculture … is in a catastrophic crisis already, and has been since 2015. We pray for your attention.”

In the letter, the Billings, Montana-based former rancher, suggested several stopgap measures. But one of the long-term solutions Bullard said would provide “real relief” to the industry was a return to accurate meat labeling.

While the U.S. is the largest producer of beef in the world, it also currently imports about $3 billion of beef annually. And yet, if that imported beef is processed and repackaged here, it can still be labeled “Product of USA.” Now, as the coronavirus pandemic has put new financial strain on the industry, many advocates say labels that give American producers a leg up over cheaper imports are more important than ever.

At the end of March, the U. S. Department of Agriculture’s (USDA) Food Safety and Inspection Service (FSIS) announced it would take action on a new rule that limits when beef can be labeled “Product of USA.” However, at a time when ranchers reporting they’re getting incredibly low prices for their cattle and the COVID-related shutdowns of meatpacking plants could mean some farmers have to cull animals, the change still won’t definitively resolve what ranchers see as the core issue: Beef should only be labeled that way if the animal was born, raised, and processed here.

Groups like the American Grassfed Association (AGA) and the United States Cattlemen’s Association (USCA), however, see the upcoming rulemaking as a long-awaited acknowledgement of the issue and an important opportunity.

“USDA does not have to respond to a petition at all. However, they did respond to ours,” says Carrie Balkcom, executive director of AGA. She calls the proposed change “a move in the right direction” and AGA is also gearing up to mobilize its members to submit comments that point out what they see as the rule’s shortcomings.

R-CALF, meanwhile, sees it as a distraction from the real prize: getting Congress to mandate that all beef carry a label notifying customers exactly where it came from.

Complicated History of COOL vs. “Product of USA”

The Country of Origin Labeling (COOL) law was first passed in the 2002 Farm Bill, was refined in 2008, and went into effect in 2013. It mandated that certain types of meat, fruits, vegetables, and nuts sold in the U.S. include a label stating the country from which they came. In 2015, however, Congress repealed COOL for beef, in response to pressure from large meatpackers like Cargill an`d Tyson (and groups that represent them) and a WTO ruling that found Canada and Mexico could impose tariffs based on the law.

More recent efforts, like the Cattlemen’s Association’s push to include COOL for beef in President Trump’s renegotiated version of NAFTA, the United States Mexico Canada Agreement (USMCA), have failed.

“This administration promised to ‘Make America Great Again,’ but it is becoming evident this does not include U.S. ranchers,” USCA director emeritus Leo McDonnell wrote to President Trump in December 2019. “The failure to include meaningful Country of Origin Labeling (COOL) for beef in USMCA is disheartening at best.”

In the years since COOL was repealed, ranchers have reported getting much lower prices for their animals, and they attribute part of that drop to competition with imported meat, which is cheaper to produce. Now, the COVID-19 pandemic has made things even worse. “We’ve been seeing some historically low cattle prices, like 20 year lows,” said USCA’s policy and outreach director Lia Biondo. “It’s been pretty incredible to witness.”

American ranchers argue that when imported meat is labeled “Product of USA,” it undermines their ability to attract buyers looking to support domestic producers. Consumer surveys conducted over the past decade have showed overwhelming support for country of origin labeling on beef. Researchers have also found the origin of beef was a deciding factor for about one-third of Americans in their sample. And since bringing back COOL for beef has been an uphill battle, some groups are attempting to get USDA’s FSIS to police the “Product of USA” label claim instead. 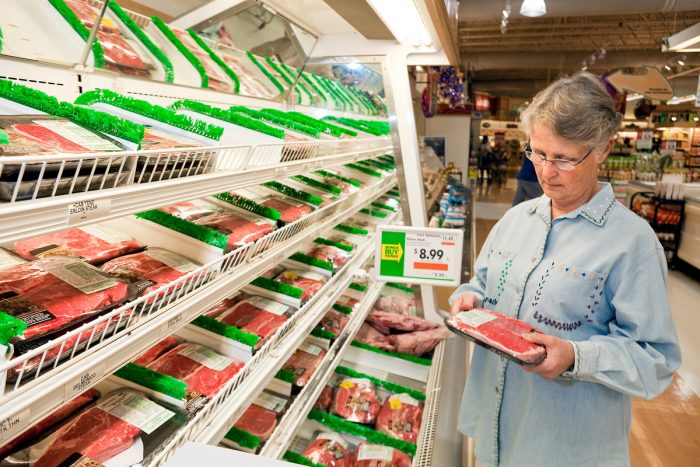 Senators Mike Rounds (R-South Dakota) and John Thune (R-South Dakota) introduced legislation in 2019 that would allow that label claim “only if the meat or meat food product is exclusively derived from 1 or more cattle exclusively born, raised, and slaughtered in the United States.”

But rather than wait for Congress to act, groups are also trying to address the issue by targeting government agency rulemaking. In 2018, AGA and the Organization for Competitive Markets (OCM) filed a petition asking FSIS to change the rule. The petition outlined how the practice leads to both consumer confusion and harm to American farmers. In 2019, USCA filed its own petition that made a similar case. The petitions received more than 2,600 comments, the majority of which were in support of the change. “Of course meat labeled as product of USA should be raised in this country,” one commenter, Alix Keast, wrote. “That is what anyone seeing this label expects.”

The Current State of Labeling

The FSIS responded to those two petitions on March 26, stating its intention to initiate the rulemaking process to address the issue. “FSIS has concluded that its current labeling policy … may be causing confusion in the marketplace, particularly with respect to certain imported meat products,” the letter stated.

It seemed like a big moment for an industry that had been fighting for so long, and in some ways it is, said USCA’s Biondo. “For USDA to come in and say, ‘Yes, this loophole exists, and we need to do something about it,’ that’s a big win,” she said.

In 2019, over 2 million cattle were raised in Canada and Mexico then imported to the U.S. for slaughter. That meat can currently be labeled “Product of USA.”

But that win came with a major caveat. In the letter, FSIS revealed that the new rule would propose that beef claiming to be made in the U.S. would have to come from an animal slaughtered and processed in the U.S., but not born and raised. USCA is “not so thrilled” with that part, Biondo added. “We would really like to see that definition include … born, raised, and harvested in the USA.”

While most foreign meat is imported after slaughter, the USCA points in its petition to a “large volume” of animals that are born and raised in Canada and Mexico and then shipped to the U.S. for slaughter. According to USDA’s Economic Research Service, just over 2 million cattle were imported from the two countries in 2019. Under the new rule, that meat could still be labeled “Product of USA.”

In the letters from the FSIS, the agency cited objections to the “born and raised” requirement from “other cattle producer trade associations, meat processor trade associations,” and the Canadian and Mexican governments. “Many official U.S. slaughter and processing establishments use Canadian and Mexican cattle as the source animals for their meat and meat products,” the agency’s response states.

Balkcom and Biondo are both still optimistic, however, that once the rulemaking process begins, concerned ranchers and citizens will argue for the narrower definition through the comment process.

Bullard, meanwhile, says the entire process is a distraction from the more effective goal of reinstating COOL. “What Sonny Perdue is proposing at this point is … a label designed to exclusively benefit multinational corporations and to further empower them to source cheaper beef and cattle from foreign countries and pass it off to U.S. consumers with a USA label on it,” he said.

An FSIS spokesperson said the agency does not yet have a timeframe for when the new rule will be posted for comment. If it happens fairly quickly, there’s also a question of how engaged ranchers and consumers will be in the process, given the current stresses of the pandemic.

Advocates aren’t worried on that front. Balkcom said that, if nothing else, the upheaval around COVID-19 could lead Americans to think more deeply about the sources of their food, “especially food that’s coming in from other countries.”

Biondo is confident that ranchers will comment on the rule, as they always have before. If they’re not able to convince FSIS to include a “born and raised” provision, USCA will continue to push for legislation. “It’s such an important issue,” she said. “We need to tackle it from all sides.”