Can Restaurants Survive the Pandemic By Feeding Those in Need? | Civil Eats

Can Restaurants Survive the Pandemic By Feeding Those in Need?

Chefs, struggling to save their own restaurants, have quickly applied their passion and skills to feed their communities. 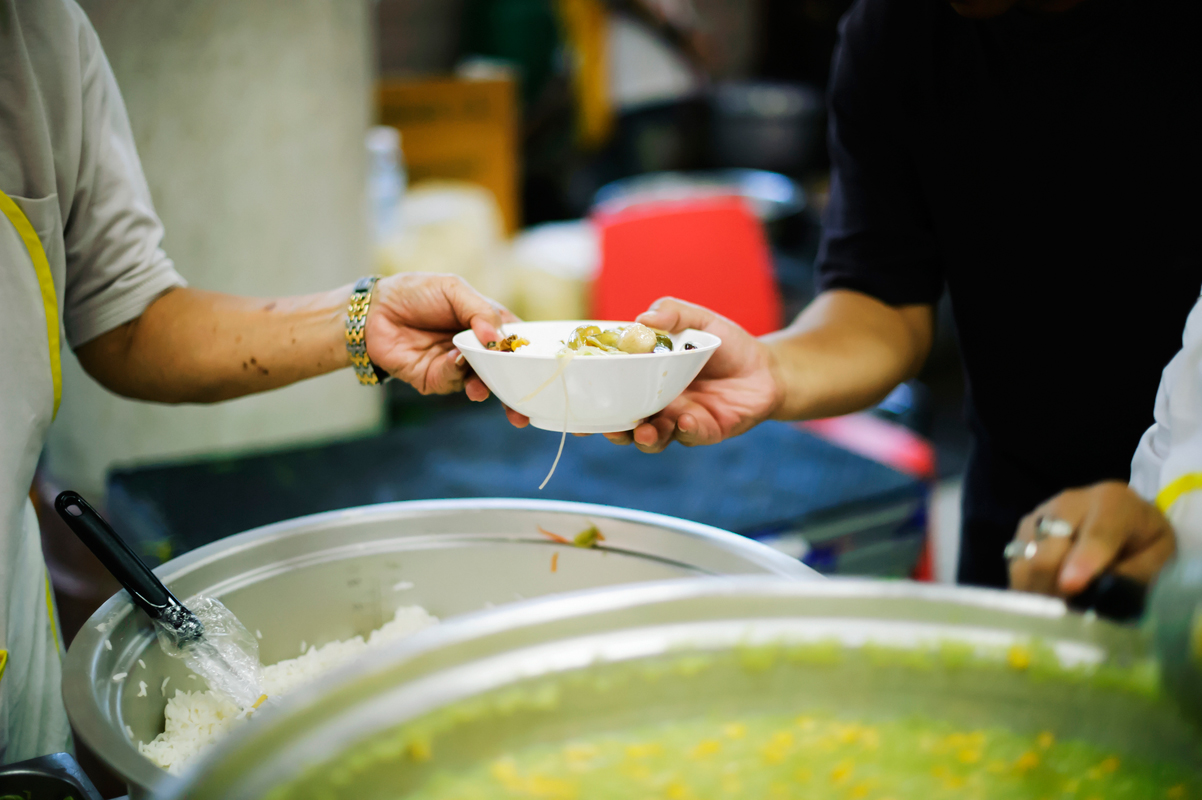 During the second week of March, Liz Mullen started to worry. The coronavirus pandemic had begun to change daily life in the Twin Cities, where she ran Chowgirls Killer Catering.

“I saw all our scheduled parties disappear and, at the same time, this need for food in the community blossoming,” Mullen said. Her immediate instinct was to call Second Harvest Heartland, the local food bank she often sent leftover food after large events. Chowgirls had also worked with Second Harvest and Hennepin County to address food-handling rules that could help the company salvage otherwise-wasted food. Changing these rules helped Chowgirls rescue 1,200 pounds of food when Minneapolis hosted the Super Bowl in 2018.

Through that process, Mullen gained an understanding of how restaurants and catering operations are perfectly situated to feed people, quickly and at scale. And during this unprecedented crisis, she’s begun putting that knowledge to work.

In mid-March, Chowgirls teamed up with local restaurants and food-assistance programs to create Minnesota Central Kitchen (MCK), a community-focused effort that is quickly ramping up to serve 10,000 meals a week. Modeled after Chef José Andrés’ World Central Kitchen, MCK is using rescued food from now-shuttered restaurants to cook hot meals delivered to 35 distribution sites in the Twin Cities area.

Andrés, who was featured on TIME magazine’s cover late last month, has been leading the charge in feeding communities in crisis worldwide, and converted five of his D.C.-area restaurants, and his outlet in New York City, into what he calls community kitchens. “Today an army of American cooks stands ready to serve our most vulnerable citizens, at a time when those cooks are themselves in desperate need of support,” Andrés wrote in a recent op-ed for the New York Times.

As states take dramatic action to slow the spread of the novel coronavirus, and the hospitality industry—which employed more than 12 million people pre-pandemic—tries to find a path toward survival, Mullen hopes that projects like hers and Andrés’s will set useful examples for the ways the system changes can adapt in the wake of the pandemic—and in the long run.

“There is a huge, immediate need for people who couldn’t stockpile at the grocery store,” Mullen said. But, she added, even if they scale up their own production, and inspire other groups to follow suit, “this is a long-term issue that we as a community will have to figure out.”

While many restaurants have closed, some owners have shifted gears to take-out models, and others are operating like grocery stores. Many restaurants are delivering food directly to hospital workers on the frontlines, some are being funded by wealthy tech donors to help feed the needy in the Bay Area, and some have been feeding laid-off restaurant workers, like Mozza Pizzeria in Los Angeles, which was helping address non-food needs such as unemployment claims, until Chef Nancy Silverton herself was diagnosed with coronavirus.

Chef Rick Bayless in Chicago announced on Twitter that he received a $250,000 donation to hire 15 of his laid-off restaurant workers to sort grocery boxes, distribute groceries to employees at his restaurants, and partner with Chicago chefs to pick up groceries for their staff.

Some, like MCK, are using their skills to keep feeding people during the crisis. As community food needs and stay-at-home orders expand, restaurants are moving quickly to reconfigure their work. And for many chefs, in order to continue supporting restaurants’ shift to provide nutritional and economic support for their communities, policymakers are going to have to step up their support, or at least stay out of the way.

“The opportunity now is for the government to affordably contract with restaurants, procure local food, and make sure citizens get healthy food,” said Robert Egger, the founder of DC Central Kitchen and LA Central Kitchen. Egger and other advocates are calling on governors and municipalities to link small and sustainable farmers who once sold what they produced mainly to restaurants and the swelling population of economically vulnerable people.

“Congress and the administration took a good first step for small business relief in the CARES Act, and when Congress comes back we’ll all be looking for additional loans, tax relief and potentially, access to even more cash grants,” said Katherine Miller of the James Beard Foundation, which helped create the Independent Restaurant Coalition, an advocacy group voicing the necessity of these measures.

Policy solutions are likely to be slow in coming, but restaurants, entrepreneurs, and organizers are creating their own rapid-response solutions. WCK, along with Feeding America, last week announced the launch of America’s Food Fund on GoFundMe to address the nation’s food access crisis, with $12 million in funding from Leonardo DiCaprio, Laurene Powell Jobs, Apple, and the Ford Foundation. And others are already building bridges between restaurants and emergency feeding programs. MCK relies on Second Harvest to raise funds for operational expenses and soup kitchen Loaves & Fishes for its distribution expertise.

In Boston, Forge Baking Company is making meals for Community Cooks, an organization that usually runs on volunteers. Forge is able to absorb the cost of labor and food through their GoFundMe campaign, which has raised more than $25,000.

In Westchester County, just outside New York City, chefs partnered with the Feeding Westchester food bank to launch a Million Gallons project to make soup for the suddenly unemployed hospitality sector. They are also crowdfunding support and have challenged other chefs to join the effort.

Nationwide food bank network Feeding America’s MealConnect digital logistics program helped match perishable food and staples from recently closed restaurants to food shelves and meal programs. Ad hoc collaborations are in place, too, as chefs band together to make sure food doesn’t go to waste, whether that involves renting moving trucks to create mobile markets, or funneling food from closed restaurants to ones that are staying open.

That’s what happened with Hope Breakfast Bar in St. Paul, Minnesota. Chef Brian Ingram has cooked in food trucks, popups, bars, and even during disasters: Ingram set up a barbecue and fed aid workers in New York City for a couple of days after Hurricane Sandy. When the coronavirus shutdown started, there was no question in his mind what they’d do.

“We decided to pivot to become a community restaurant. We never even thought of doing curbside service,” Ingram said. Even though this situation will last much longer than the hurricane response, Ingram and his wife, Sarah, are prepared to keep giving away food until they can’t anymore.

Hope Breakfast has 20 people on staff, and for the moment, employees are still getting paid. One couple is minimizing contact with others by cleaning overnight. Other restaurants that closed donated food, and people are donating food and money. One food supplier switched the restaurant’s account to a nonprofit category and began funneling them food to help keep the project rolling.

In Seattle, Filipinx restaurant Musang felt the impact of the pandemic earlier than most. After shutting down operations in mid-March, chef-owner Melissa Miranda switched to take-out for one day only, but immediately realized it didn’t suit her community-driven vision. Musang began as a popup four years ago, a project to educate people about Filipino food. Giving space and attention to Filipino culture, and connecting to social justice efforts such as FareStart, YouthCare and FEEST Seattle has always been a key part of the work. Using the restaurant’s resources to help others addresses some of the fear and insecurity that belong to this moment felt right.

Musang is one of several restaurants that make up the Seattle Community Kitchen Collective, which is preparing free meals and using social media and word of mouth to make sure people know they are available daily in the city’s South End.

At Musang, Miranda and several of her staff are making about 150 meals a day. They send the food to the nearby Filipino Community Center, and provide free meals and groceries to anyone who calls. (They schedule individual pickups 15 minutes apart to keep proper spacing.)

Food donations are keeping the process rolling, and Miranda is looking ahead to regular business resuming, when she hopes to offer a community day every week at a revived Musang. For now, however, Miranda encourages people to work within their own communities to help those in the most need. For her, that means feeding people, setting up a relief fund to help former Musang staff, and organizing with other restaurants to demand more than loans from the government.