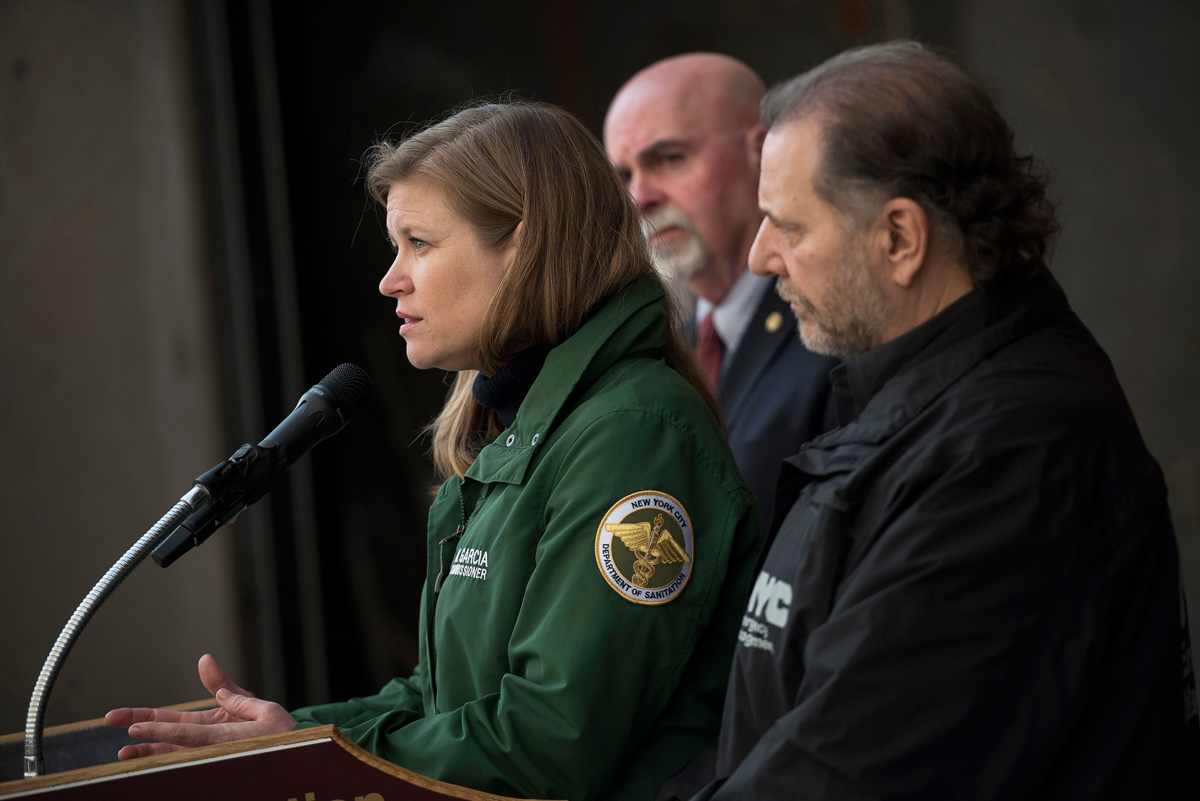 September 8, 2020 update: The New York Times today reported that Kathryn Garcia has stepped down from her role, potentially to pursue a run for mayor of New York City.

On March 22, with New York City grappling with 9,654 confirmed cases of COVID-19, Mayor Bill de Blasio named Kathryn Garcia, commissioner of the Department of Sanitation, as “COVID-19 food czar” to the five boroughs. The news came two days after Governor Andrew Cuomo ordered non-essential businesses to shutter and residents to shelter in place, and as de Blasio was taking heat for what the Columbia Journalism Review described as a “lackluster” response to the pandemic.

Regarding his decision to appoint Garcia—touted as the city’s “go-to crisis manager” for her work responding to the housing authority’s lead paint scandal, for example—de Blasio spoke of the need for “New Yorkers [to] have a steady supply of food, whether that is a home-delivered meal or provisions from a grocery store,” with a special emphasis on the city’s most vulnerable populations, including those made newly food-insecure as a result of the pandemic.

In the two weeks since her appointment, Garcia has coordinated a massive effort to get food into the city and out to the people who need it most. She’s working closely with the Mayor’s Office of Food Policy “to ensure we are connecting all the dots and not leaving any New Yorkers behind,” says Director Kate MacKenzie—as well as with many other city agencies, food banks, and philanthropic organizations. She spoke with Civil Eats on April 4, just after the city expanded the Department of Education’s grab-and-go meal program from serving children exclusively to serving New Yorkers of any age.

What are the challenges to keep supply chains strong right now?

We’re seeing massive consumer changes, [and] not only with panic buying, which is working itself out. With everyone at home, we suddenly have a city of bakers, and people are looking for more calorie-dense foods. There is food coming into the city, but on any given [normal] day, 40 percent of it goes to restaurants, and we’re now scrambling to serve the grocery market. The real challenge there is in the labor sector. People are sick, people are scared, and [that leads to] not having enough people in stores to shelve food. It’s a significant constraint.

One thing that has been somewhat helpful is that there’s strong diversity within the system: We’re not reliant on any one supply chain. But there is concern that in a month or two, other parts of the country will be significantly impacted [by COVID-19], which could impact our supply chain. So we’re looking back to the Midwest: Are they planting? Getting the labor they need into the fields so we don’t have issues in two months’ time?

We’re also doing things like counting the number of trucks coming into [Bronx food distribution hub] Hunts Point every day and trying to figure out how to keep them coming; drivers need a layover space, access to restaurants and food that’s socially distant so they’re not spending any time in the city and encountering people, so they can stay safe.

School-based grab-and-go meals for kids went into effect in mid-March, and on April 3, you expanded the program to include three free meals a day for all New Yorkers. How is it working so far?

We’re really beefing up all our emergency feeding programs, whether at food pantries or through grab-and-go at [435 public] schools. And with philanthropic support, we continue to expand our ability to do home delivery for fragile populations. We’re also figuring out which populations are on the sidelines and getting them back into the labor force; we’ve activated taxi and Uber and Lyft drivers who are now unemployed and are pairing them at [six] distribution sites [at parks and recreation centers] to do meal delivery.

We’re also working with Small Business Services to figure out how to get grocery stores more employees for restocking. We’re in contact with big associations of grocers, with ethnic associations of grocers, with trucking associations, with the nonprofit and advocate sectors, talking to them about what they’re seeing on the ground, how we can be more supportive, how we can keep them strong so they can still be providers. It’s a lot of coordination and rebuilding of the market at a moment of incredibly rapid change, when people have turned on a dime and are behaving completely differently because they’re sheltering in place.

New York on a “normal” day has 1.2 million food-insecure residents, and that number is thought to have increased exponentially since coronavirus became an issue. How much of the need for meals have you been able to meet?

We did north of 200,000 meals [on April 3 alone], between grab-and-go and all the other programs going on in the city; [about 70,000 of those meals] went to seniors. [Editor’s note: The Department for the Aging is working to serve its usual population, but with senior centers closed, this means grab-and-go options and delivery by the Office of Emergency Management.] There is more need out there but also a lot of fear, with people afraid to go outside. That’s why we are rapidly trying to expand the capacity to do home delivery, even for seniors who are usually independent, who went to the grocery store and made their own food, because even if they’re well-off and can pay, grocery delivery is hampered by not having enough staff.

We also need to get food to people that’s what they’re used to eating. Obviously, we have very diverse communities, with many dietary restrictions [and preferences]. We’re working with foundations and trusted organizations in Mexican-American and Asian-American neighborhoods—and we also have a very large Orthodox population—to get them foods they’re accustomed to.

How are you reaching people in low-resource communities that might not be able to access relevant information online about where to go for food?

We’ve done a lot of robo-calls into those communities to get the word out, and anyone can call 311, which has language access. For the sheltered population, delivery for [COVID-19] isolation and other shelters is being run through the Department of Social Services, which has its own emergency feeding contracts.

For the undocumented, there are no screens for citizenship, and no screen of any kind on any of the meals we’re home delivering. We are connecting with trusted social service organizations and coordinating with them to get food to those populations. For example, we are actively trying to work with our farmers’ market network to reach in there and do pop-ups.

Right now [essential cafeteria workers at] schools are making meals for grab-and-go, and we have been contracting with bigger firms, like [food recovery non-profit] Rethink Food, that can put together meal delivery in a standardized way [so there’s no duplication or overlap in efforts, or inconsistency in service].

Have you been learning from the emergency feeding efforts of other cities, or vice-versa?

We’ve talked to some folks on the West Coast, but we all have different challenges in terms of how many people were food-insecure before and how many people are suddenly food-insecure now. We are sharing what we’re doing, and looking for opportunities to think outside the box, but no one was prepared for something of this scale, and obviously in New York, it’s hitting faster than it is in other places.

There’s been a surge of interest in growing food, and community gardens in NYC opened on April 1. Are there ways to support these efforts?

Any of the normal things you would do in a hunger crisis, like big soup kitchen feedings, do not work here. The issue with community gardens is social distancing, and we really need to make sure we’re not together in any way and that when we are outside, we are covering our faces with masks. Right at this moment, it’s not viable to put people together communally. Being safe is more important. The next two weeks are going to be really tough, until we bend that curve. 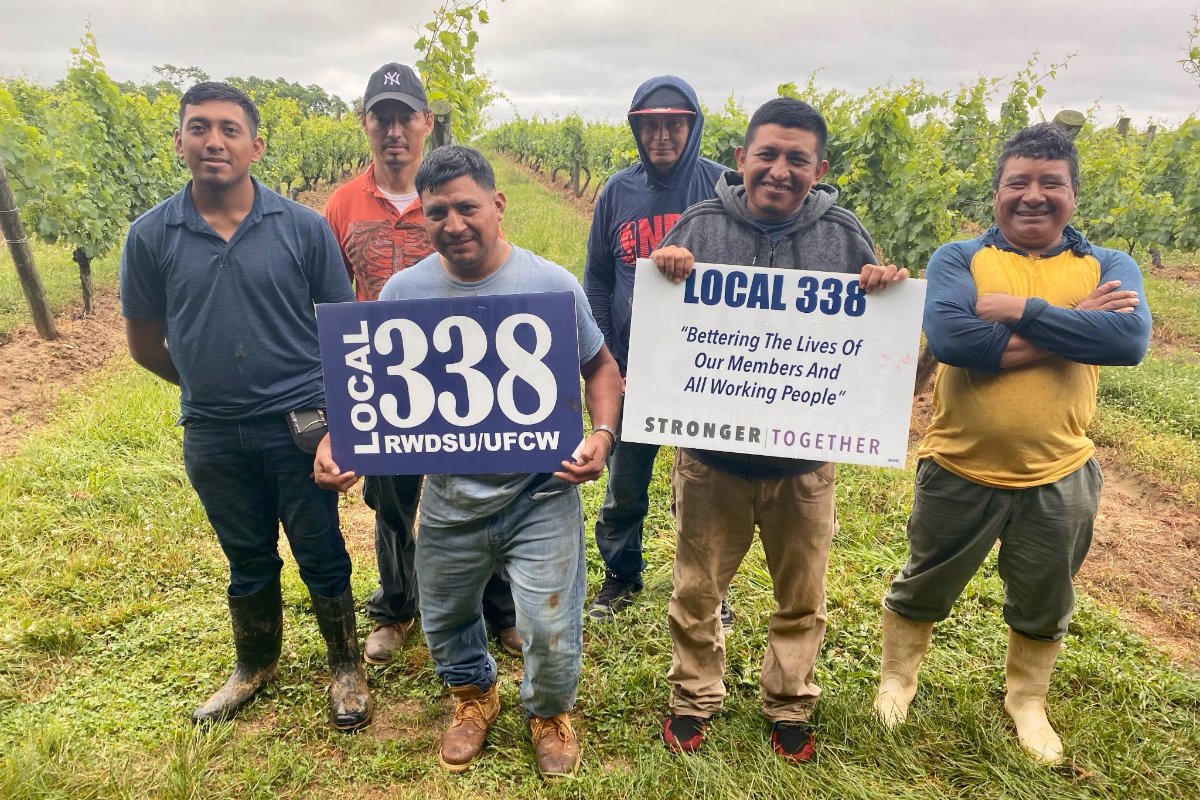