Their Restaurants Closed, Chefs Take to Instagram to Help You Cook at Home | Civil Eats

Their Restaurants Closed, Chefs Take to Instagram to Help You Cook at Home 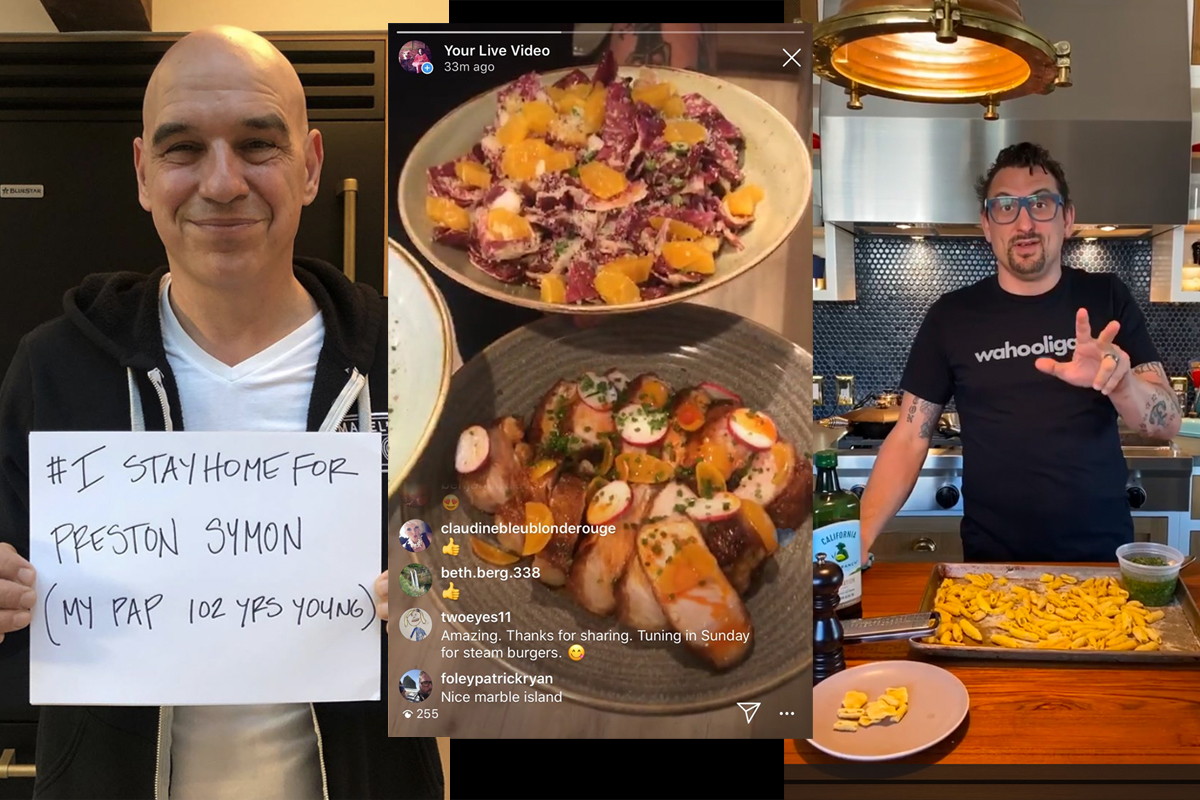 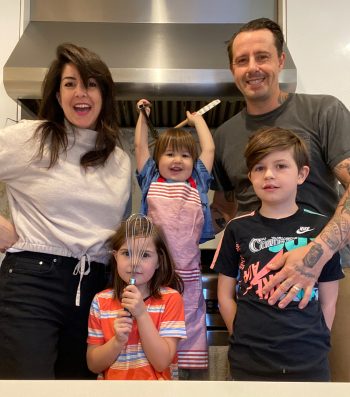 Chef Gabriel Rucker and his family.

It’s Friday at 6 p.m. and Gabe Rucker, chef at Le Pigeon and Canard in Portland, Oregon, is in his home kitchen demonstrating how to make a radicchio salad with Caesar dressing. To Rucker’s left is his three-year-old son, Freddy, who has his own chef’s station with a cutting board. Perched on a stool to his right is his six-year-old daughter, Babette, who has become her dad’s de facto sous chef. Roughly 230 fans, all hunkering down in their own homes, are watching this cooking lesson on Instagram Live.

Like many chefs, Rucker made the difficult decision to shutter his restaurants in mid-March in response to the coronavirus pandemic. While his business partner orchestrated an online wine sale and made sure all their employees were signed up for COBRA health insurance, Rucker decided to do what he does best: cook delicious food and share it with his customers and fans.

Last week, Rucker launched live cooking demos on Instagram at @RuckerGabriel, which he plans to host three days a week, every week, for the foreseeable future.

Rucker says the online cooking lessons have brought some levity amidst the challenges of staying at home. “And it’s a way to bring the family together, too. The kids love cooking, so, it’s connective for us.” But it also helps Rucker and his wife Hana—accustomed to throwing dinner parties—connect with people other than their three kids. (Gus, age 8, is more camera shy than Babette and Freddy.)

Hana, a metal artist, has taken on the role of videographer, and also funnels questions that pop up on the screen to Rucker while he’s cooking. “What cut of pork chop?” she relayed to Rucker last Friday during the class covering pork chops, radicchio salad, and steamed asparagus.

“Not the center cut,” said Rucker, wearing a “We Put the Pro in Profiterole” T-shirt. “The center cut is lean. What you really want is up toward the shoulder. It’s gonna have more marbling.”

As much of the country isolates at home, a handful of chefs are bringing solace to their fans and followers by showing them how to cook nourishing food. Many are also plugging local farms, ranches, and purveyors that risk going out of business now that restaurants have closed.

In this time of deep uncertainty and worry—nearly 10 million Americans are newly out of work, according to the latest bleak statistics from the Labor Department—many people have suddenly lost some or all of their income. As a result, many don’t have the ability to buy pork chops right now, or the mental energy to watch a cooking lesson about how to prepare them. (Even though out-of-work Americans are eligible for unemployment benefits and SNAP, many states have a backlog of claims, which can mean weeks-long delays.)

But with restaurants closed virtually everywhere, more people are forced to cook at home than ever before, and they’re seeking inspiration. And many chefs, including Rucker, are focusing on adaptable, budget-friendly comfort-food dishes like rice bowls, soups, vegetarian pastas, and hearty salads. 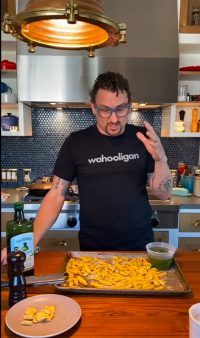 Chris Cosentino, chef at San Fransisco’s Cockscomb (as well as Jackrabbit in Portland, Rosalie in Houston, and Acacia House in St. Helena, California) started a #recipesforthepeople series on Instagram that includes a spring greens pesto on cavatelli—“a great way to use up greens in the house,” he says. In his videos, which he posts at @chefchriscosentino, Cosentino plugs local farms like Santa Cruz County’s Dirty Girl Produce, which launched a pre-packed veggie box service when the crisis began, and Liberty Ducks in Petaluma.

In Cleveland, Chef Michael Symon of Lola Bistro, Mabel’s BBQ, and B Spot Burgers, is posting short videos on Instagram at @ChefSymon, showing how to make comforting favorites like grilled cheese and tomato soup; pasta with garbanzo beans; crispy lunchmeat, spinach, and garlic; and root vegetable stew. He weaves in quotidian details about his day before launching into cooking.

“For those of you concerned yesterday, Norman is out of his time out, and wandering around my feet,” he says of his dog. “I’m in full pajamas today, with slippers,” he adds.

Over in Australia, Chef Jason Roberts of the Bistro at Manly Pavilion is posting recipes on Instagram at @ChefJasonRoberts for budget-friendly dishes like vegetarian lasagna and savory porridges. In Portland, Oregon, Vitaly Paley (of Paley’s Place, Headwaters, Imperial, and Rosa Rosa), is streaming on Instagram Live at @vit0bike every Friday at 5 p.m. pacific time, where he makes quick, user-friendly dishes like tuna tonnato and a Niçoise-style tapenade with crudités from the farmers’ market.

Local food champion and cook Katherine Deumling of Cook With What you Have, also based in Portland, has also been posting short videos on Instagram at @cookwithwhatyouhave, with an emphasis on local ranchers and farmers. In a recent post about vegetables, she urges followers to shop at farmers’ markets. “If they’re still open, please patronize them,” she says. “The best produce you can imagine will be there, which will help you stay strong and help support our local farmers.”

In her video for fried rice with strip steak and veggies, she mentions the beef comes from Carman Ranch, which now has a direct delivery service to Portland. (Deumling posts recipes and additional videos on her site; you can get a month of free access using the code Foodislove.)

Back in Rucker’s kitchen, he whisks egg yolks with Dijon mustard and garlic as he slowly, steadily drizzles oil into the metal bowl. “See how there’s a thin steady stream of oil going in there, right in the middle?” he asks his invisible audience.

He shakes in some Tabasco sauce and a dash of Worcestershire. “The recipe calls for red wine vinegar, but I don’t have that, so I’m gonna use malt vinegar,” he says. “You have to adapt.” He throws a bowl of pre-grated Parmesan into the dressing and a “pinch” of salt (though it’s more like a generous shake, from a squeeze tube bottle).

“What’s with the squeeze tube of salt?” Hana asks on behalf of an Instagram follower. “We cook a lot, and I’m using salt all the time, and I don’t want to put my fingers in the salt,” Rucker explains.

Rucker pauses to patiently slice a mandarin orange in half for Freddy. Later, Babette, now slicing kumquats, does bunny ears behind her dad’s head. “This is Gabe. He loves cooking. He loves doing videos,” Hana says.

“Babette is cutting up kumkquats,” Rucker says. “That citrus element on the pork will cut through the fattiness and richness. And also tie into the orange flavor of the Caesar salad.”

Rucker’s favorite source for pork chops, he divulges in response to an Instagram audience question, is Nicky USA, a Portland-based wholesaler of wild specialty meat, much of it from Northwest ranchers and farms. (During the pandemic, Nicky USA is selling direct-to-consumer by pick-up or delivery.) Later, he offers a hat tip to the produce market Rubinette Produce. “They source their produce from all of farms at the farmers’ market,” he says. He also praises Portland butcher shop Tails & Trotters, and the specialty food shop Real Good Food. All are currently offering curbside pickup or delivery, or both.

Rucker posts his recipes on Instagram ahead of time so followers can pre-shop and follow along at home. His first meal was miso black cod rice bowls; he’s also done steam burgers (a favorite from the Canard menu), and Cobb salad. Upcoming demos will cover braised chicken with mashed potatoes and roasted broccoli, and the Canard omelette.

The response has been larger than Rucker anticipated, and he’s gained 5,000 new followers over the past week alone. “People are saying it’s a real bright spot for them and that they love doing it,” he says. “Right now, it’s what we need.”