Working long hours at great risk of exposure, thousands of grocery store workers are being recognized as essential with a pay raise. 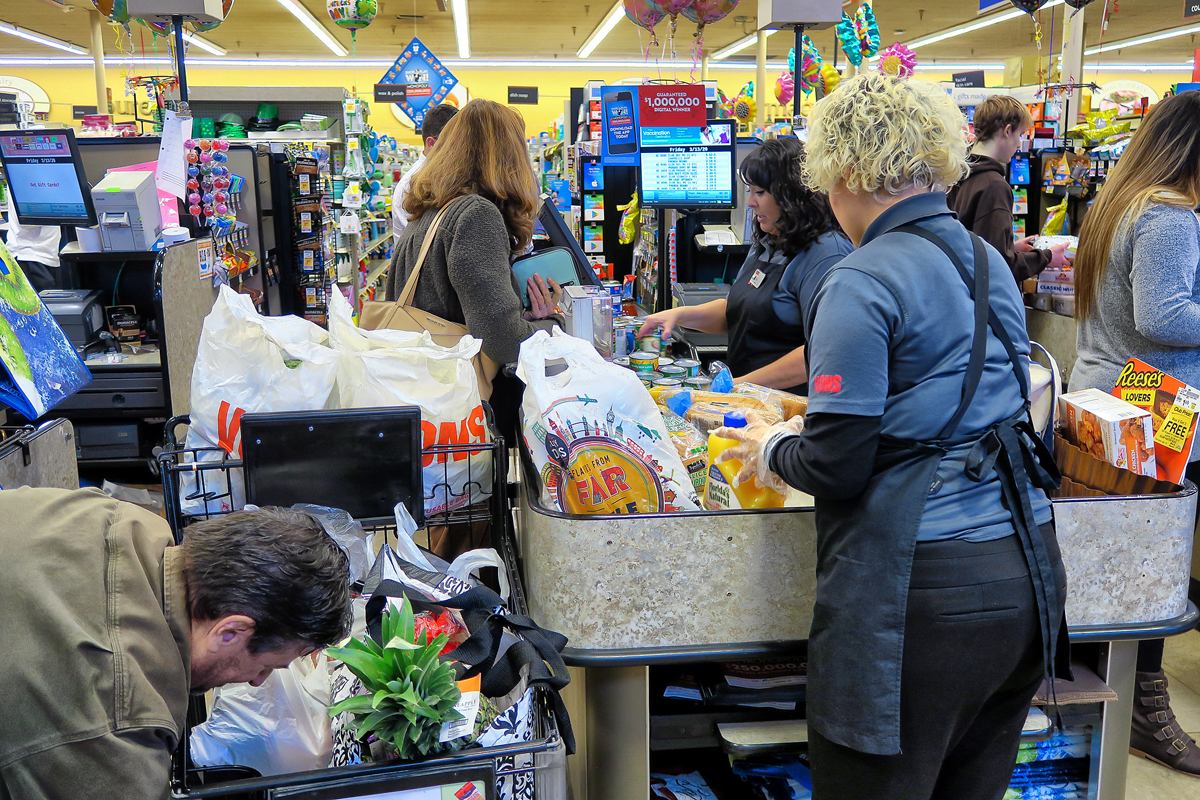 March 24, 2020 update: Workers at a Perdue chicken-processing facility in Georgia walked off the job in protest of what they said were a lack of health and cleanliness protections, as well as a lack of hazard pay or bonus pay. And Kroger expanded its COVID-19 response to include paid sick leave for employees who have tested positive for the disease, while also installing plexiglas partitions at checkout stands to provide a layer of protection to cashiers and baggers.

March 21, 2020 update: Kroger announced today that it will provide a one-time bonus to every hourly frontline grocery, supply chain, manufacturing, and customer service associate, amounting to $300 for every full-time associate and $150 for every part-time associate.

Our original reporting begins below.

As Americans in multiple states have been ordered to remain in their homes for all but essential needs, many have been “panic buying” toilet paper, bottled water, and pantry items, putting supermarkets on the frontlines of the COVID-19 pandemic. On Friday, however, thousands of grocery store workers in Southern California received good news: The Albertsons, Vons, and Pavilions supermarket chains agreed to pay employees $2 more per hour.

The raises are part of a national response to the coronavirus crisis that has seen calls for paid sick leave, health insurance, and better pay for food workers in grocery stores, restaurants, delivery operations, and coffee shops. A Starbucks barista in Philadelphia successfully launched a Coworker.org petition demanding that stores close during the pandemic but continue to pay for workers.

Trader Joe’s and Walmart employees have received bonuses, while Target, Whole Foods, Amazon, and the Texas grocery store chain H-E-B are offering $2 per hour raises. The Southern California United Food and Commercial Workers (UFCW) local unions, which represent more than 60,000 grocery store employees, are also in talks with chains Ralphs and Stater Bros. to give workers “hazard pay” as they continue to interact with the public.

Last year, West Coast grocery store workers were ready to strike for better wages and treatment. But during the COVID-19 outbreak, they are receiving more pay and appreciation as the lifeline between the public and the goods they need to survive.

“Our members that are in these stores right now—they’re heroes to the community,” Todd Walters, president of San Diego’s UFCW Local 135, told Civil Eats. “They’ve stepped up to the challenge to make sure our community has clean, fresh food.” As millions of service, transportation, and arts jobs have either been put in jeopardy or completely disappeared over the last two weeks, grocery workers may not have other work options. But, like healthcare workers, delivery people, and postal workers, they are stepping up to help their communities. “They’re doing a vital service to the community,” says Walters.

Because they come into close contact with the public—fielding questions from customers and handling their cash and bags—grocery store workers are in an especially vulnerable position. Just this week, Walters said he got word that a grocery store pharmacist is in quarantine after being approached by a customer with a fever asking how to use a thermometer. The customer, he added, had recently returned from Italy.

“Our members thankfully have health insurance, which we fight very hard for, but people who aren’t paying attention to the crisis are putting them in jeopardy,” Walters said.

In addition to demanding hazard pay, many grocery store workers across the country are also asking their employers to modify their working conditions to keep them safe. And, in some cases, cities are intervening on their behalf. On Wednesday, the Los Angeles City Council passed a motion for the L.A. City Attorney to draft an ordinance to protect the health of grocery, drug store, and food delivery workers during the COVID-19 crisis.

The city council is expected to vote on the ordinance Tuesday. If enacted, it would give grocery store workers access to free coronavirus testing and flexible work hours as well as the opportunity to frequently wash their hands and use masks, antiseptic wipes, and hand sanitizer at work.

A grocery store worker stands behind a new plexiglas partition at Krogers. (Photo courtesy of Krogers)

“There is no business as usual right now,” said John Grant, president of Los Angeles’s UFCW Local 770, in a statement. “That means that workers need increased protections and flexibility in order to continue to keep the grocery stores open and everyone safe. Staffing, hygiene, and restocking have all changed overnight and grocery and drug store staff have been responsive. We need measures to ensure they remain protected on the job.”

Rachel Fournier, a cashier at Ralphs near the Exposition Park neighborhood of Los Angeles, said that on Thursday she worked without access to hand sanitizer and Lysol disinfecting wipes after her store ran out of them. She made do with gloves and followed the store’s new protocol for employees to wash their hands every 30 minutes. Her past two weeks at the store have been the “craziest” of her 15-year tenure at the supermarket chain, Fournier said.

“People started buying all the masks and then all the sanitizer and toilet paper,” she said. “It went crazy from there. It triggers all the customers to start doing the same thing. Maybe they don’t want to panic, but you start seeing all these gaps on the shelf and you think, ‘I’m going to be the one left with nothing.’ So, [the panic buying] spreads to almost everything—canned goods, dry goods, potatoes, sauces, ramen noodles, meat.”

Now, the store limits the number of customers who can be in the store at one time to 50, Fournier said. This makes her feel safer, but she still worries because she shares her home with her husband, nephew, and mother-in-law, who has medical issues, and doesn’t want to expose them to the virus.

“There’s a risk that I pose to my family,” said the 42-year-old, who believes that she and her colleagues should receive hazard pay. Moreover, she points out that the pandemic has given grocery stores a financial boost. Rodney McMullen, the CEO of Kroger, Ralphs’ parent company, announced Tuesday that the corporation has hired more than 2,000 people and has more than 10,000 job openings during the pandemic’s wake. And Kroger stock has climbed as the overall market has slumped.

Fournier wants to see mobile handwashing stations throughout the store and patrons making sure to keep their distance. Some customers tend to lean in to ask questions, she said, and others have taken to using cash instead of debit or credit cards because they don’t want to touch the payment terminals at the register. She adds that patrons can protect themselves and cashiers by installing the Kroger Pay app on their phones for a no-touch transaction.

“It’s safer for everybody,” Fournier said of the app. “It even scans coupons.”

But grocery stores might be taking even more concrete action to keep their workers safe. Walters said that as early as next week, some supermarkets will begin installing plexiglass around cashier stations to form a barrier between these workers and the public.

Pamela Brown, who works at the deli counter at a Ralphs in downtown Los Angeles, said that her Christian faith has allayed any fears she might have about contracting COVID-19 in the workplace.

“I’m not scared at all whatsoever,” the 57-year-old mother of two told Civil Eats. “I don’t believe I’m going to be sick. I take care of myself.”

She said that last week, her store had lines that were two blocks long. “It was out of control. It was unbelievable.” In recent days, however, the crowds have started to calm down, and her store has prioritized safety.

“They are wiping down things more every day, all day long,” she said, adding that store employees “always had to wash our hands.” Customers can help by washing their hands as well.

In some cases, however, shoppers are taking the hand sanitizer and disinfecting wipes that cashiers leave at their registers. This puts workers at risk, Walters said. When customers buy these products in bulk, they also make it harder for grocery store employees to protect themselves.

“If customers would understand that they don’t need to hoard and should treat everybody with respect, that would be great. The workers [are] not running around hoarding toilet paper. They’re focused on getting the community what they need.”

Fournier said the last few weeks have shown her that she’s part of the country’s “critical infrastructure.”

“You don’t think about it until something like this happens,” she said. “Even though we’re part of a union, working at a grocery store is thought of as a low-tier job. Now, it’s like, ‘Wow, I’m out on the frontlines. I’m needed.’”