With a grocery store, traditional garden programs, and an emphasis on cooking, the northern North Dakota tribe is reviving its food system through traditional foods. 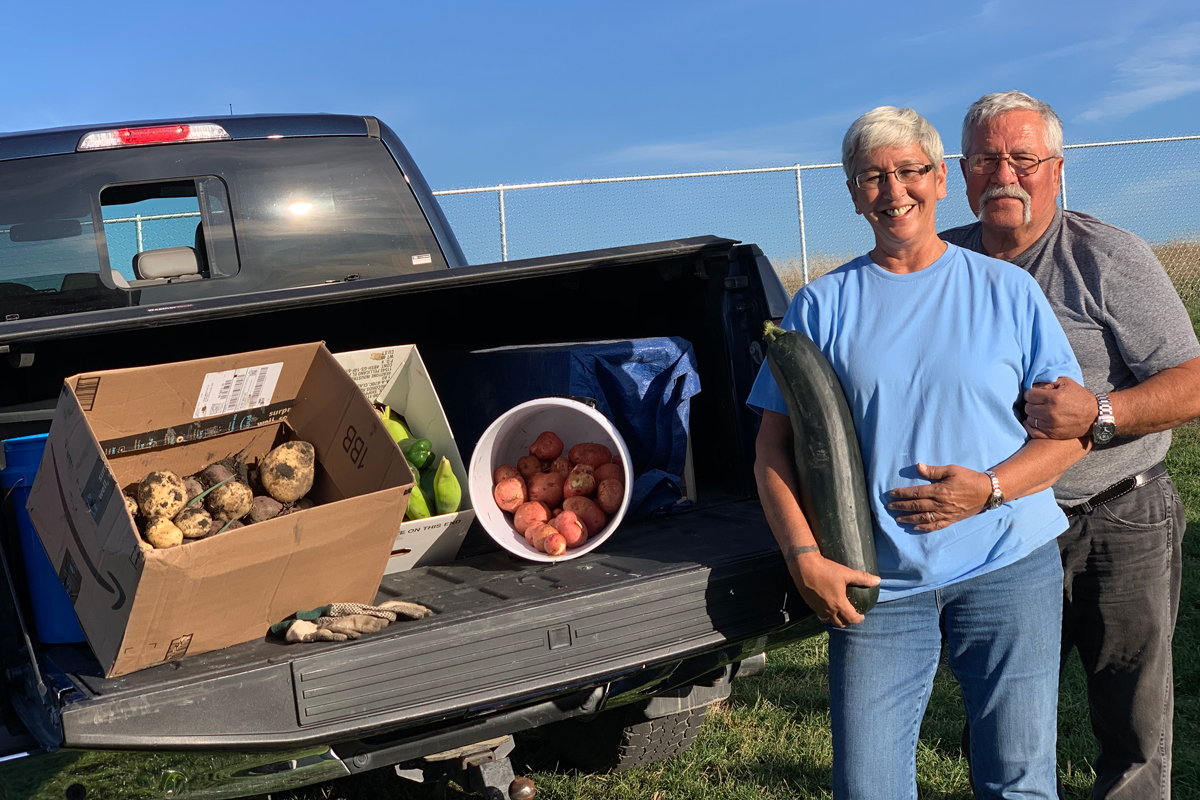 Mary DuBois walks slowly through one of two aisles of what looks a lot like a grocery store. As she chooses her family’s monthly groceries, she passes rows filled with boxes of cereal, bags of rice, and cans of vegetables.

However, unlike a regular grocery store, this one includes traditional Indigenous foods like blue cornmeal and catfish. The wooden shelves are shaped like tipis and all the signs are written in both English and the local Dakota language. And when DuBois checks out, she won’t have to pay any money. Instead, all the food she takes home will come out of her monthly food allotment, which she receives as part of the Spirit Lake Food Distribution Program. 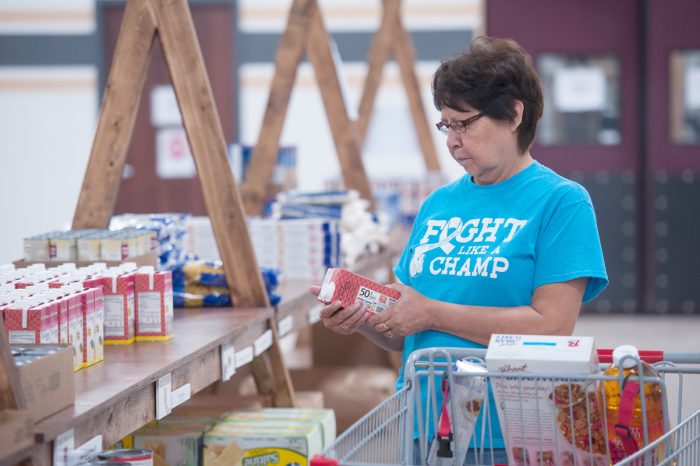 Photo by Don Hamilton for USDA.

The Spirit Lake Reservation is located in northern North Dakota and headquartered in Fort Totten, about 15 miles from Devils Lake; the reservation lies along its shores, and is surrounded by miles of farmland. The tribe has more than 7,500 enrolled members, around 2,000 of whom live on the reservation, spread out across approximately 405 flat square miles. In late October, in the wake of heavy rains and snow, bales of hay that had been left in the fields were partially submerged and frozen in place, too heavy to move.

Nearly half of the tribal members living on the reservation participate in the Food Distribution Program (FDP), which is managed by U.S. Department of Agriculture’s Food and Nutrition Services as an alternative to the Supplemental Nutrition Assistance Program (SNAP). The income eligibility requirements to participate in the FDP is the same as that of SNAP, and some Spirit Lake members go back and forth between the two programs. And while SNAP is an important resource, there are no full-service grocery stores on the reservation, and some residents also do not have access to reliable transportation. Depending on where they live on the reservation, the nearest grocery store can be a 30-minute drive each way.

Food insecurity is a big problem in Native American communities and on reservations across the United States. Twenty-five percent of tribal members receive some kind of food assistance. Some use SNAP benefits, while others participate in the Food Distribution Program. From October 2018 to September 2019, 83,800 individuals living on or near reservations received benefits from the program. While the program is meant to be a supplement, a University of Chicago study found that 38 percent of national respondents said it was their sole or primary food source.

Food gets to FDP enrollees in a number of ways. In some cases, trucks deliver boxes of groceries. In other cases, recipients visit a distribution center. That’s the approach Spirit Lake used until four years ago, when the tribe decided to create a grocery store instead—in part because it gives residents access to fresh produce throughout the month. Reservations in Oklahoma as well as a few others that are closer by, including those in Blackfeet, Montana, and Winnebago, Nebraska, also use the store concept.

A Different Way to Distribute Food

Choice is also key to the model. “It gives them a little bit more ownership and a little bit more pride,” says Mary Greene Trottier, director of the reservation’s FDP for the last 34 years. She also grew up on the reservation and is a member of the Spirit Lake Nation. Trottier has short blond hair, a loud laugh, and seems to be tireless. “They have a connection to what they’re picking because they are the ones choosing.”

DuBois has been coming to the store—which takes up the first story of a spacious warehouse in Fort Totten—once a month since it opened four years ago. Transportation is a challenge for her, and she gets a ride with a friend. She has a disabled adult son and two grandchildren and is responsible for getting food for all of them, and likes the grocery setup better than the box pick-up. The tribe has worked to accommodate people with additional needs: Home delivery is available for those who can’t travel, and there are electric scooters and a drive-thru available for people with mobility issues. 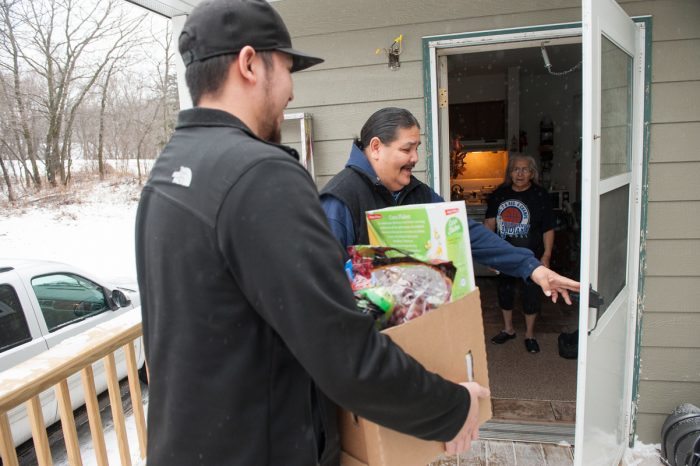 Still, going from having clients pick up a box to choosing individualized foods required education in the beginning. “It used to be, you would come in, tell me what you want, then I’d go into the warehouse, box it up, set on the counter, and you would leave.” Once they converted the system, Trottier and her team had to walk every client through the distribution center to help them shop. “Our feet were so tired,” she recalls.

In addition to blue cornmeal and catfish, the store provides traditional foods including wild rice and bison. But these traditional foods are provided by the USDA’s food distributor, not by any Native communities. Trottier hopes to change that in the future by helping members of the tribe produce more food of their own and eventually sell it to the FDP. As part of the 2018 Farm Bill, the 638 Self Governance Demonstration Project gives $3 million to increase Tribal control over purchasing Native-produced traditional foods. While this is a promising development, Trottier and Spirit Lake do not have plans to make use of it at this time.

“We will have to apply to be a part of this project and I don’t think we’re quite ready yet,” Trottier said. “But I feel it would be an economic boost for many communities to grow, sell, and procure their own food.”

The Spirit Lake FDP is also working on developing aquaponics and hydroponics programs, where they could grow herbs and seasonings such as cilantro, rosemary, and oregano. They received a $25,000 grant from the First Nations Development Institute to invest in these activities last spring. And these would be just some of multiple projects on the reservation that would get tribal members more involved in farming. Trottier’s hope is also to produce the “three sisters” crops—squash, beans, and corn—along with melons, tomatoes, beets, and onions.

While food security—ensuring that there are enough calories to feed the tribe’s members—is very important, many reservations are focusing on food sovereignty as well. From the Karuk tribe in California to the Hopi Nation in Arizona, chefs, gardeners, and activists are working on not just on feeding Indigenous people, but feeding them well and with their own cultural food.

“It would be an economic boost for many communities to grow, sell, and procure their own food.”

“I think it’s important for people to remember that Native people are members of sovereign nations,” says Elizabeth Hoover, a professor of American Studies at Brown University and a descendant of the Mohawk Nation. “It’s not just another ethnic community; rather there are hundreds of sovereign nations with the United States. And food sovereignty is part of being a sovereign nation. With it comes good health, language, and connections with food producers.”

Food has always been an important part of life in the Spirit Lake tribe. At the moment, however, the only people farming on the reservation are not part of the tribe. According to Trottier, the Spirit Lake Reservation has over 250,000 acres, and most of it is leased out to non-members who mainly grow hay and soybeans. There also some farmers raising animals in large, confinement-based operations. There is a tribal cornfield, but it is over 30 miles from Fort Totten and not accessible to everyone.

“Family gardens were such a big part of life not long ago,” Rob Graywater, a tribal member, said in an article for the Tribal College Journal of American Indian Higher Education. “My mother used to tell me that they had two gardens every year—one close to their house that they would eat from and a larger garden that they would sell from and gather seed from for the next year’s garden.”

Mary Greene Trottier also remembers growing up with a big garden. “If we were hungry, we could go pull a carrot or a radish out of the ground,” she recalls. 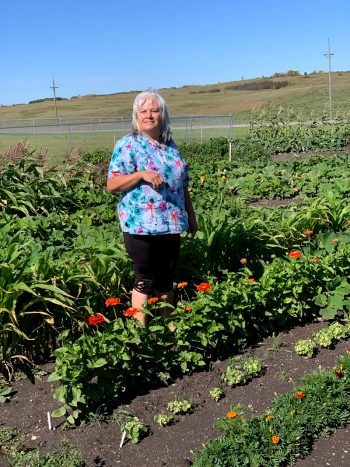 A resident of the Spirit Lake reservation tending her community garden. (Photo by Heidi Zeigenmeyer)

Separately from the Food Distribution Program, although in cooperation therewith, the reservation’s Cankdeska Cikana Community College is bringing gardening back to the members of the Spirit Lake Nation. Last year, the college’s Land Grant Department began a community garden project.

“There’s a lot of diabetes on the reservation, a lot of health impacts from having low-quality food. The goal was to support access to healthy foods,” says Heidi Ziegenmeyer, the land grant director and an instructor of natural resources at the college. While the College is not officially part of the FDP, both are part of a coalition working on health issues on the reservation.

Last year, the community garden rented plots to 10 families. This year, Ziegenmeyer is hoping to double that number. The land grant program also has a small John Deere tiller, which Community Ag Coordinator Paige Hook will drive to the house of any tribal member who would like to start a garden.

Both Trottier and Ziegenmeyer are also working on farmers’ markets, which will serve the dual purpose of giving Tribal members an opportunity to earn some extra money and a chance to gain more access to local, traditional foods. The FDP recently received a grant for a senior market, where seniors 55 and over would get a $50 voucher. The market would include traditional crops such as juneberries, chokecherries, wild turnips, and kohlrabi.

Ziegenmeyer is also planning a mobile farmers’ market with produce from the community garden that would follow the tribe’s mobile clinic, which travels to the far reaches of the reservation once a week. “We’d bring the food to the people,” she says.

The Next Generation of Native Growers

Being able to grow traditional produce is important, but not especially helpful if the knowledge about how to prepare it has been lost. For this reason, the FDP hosts nutrition and cooking classes, often using ingredients from the garden and in the grocery store.

They also offer after-school cooking programs for children in a demonstration kitchen—adorned with tribal artwork—that sits one floor about the grocery area. The kitchen has marble countertops, a large refrigerator, and multiple sinks for handwashing.

On a cold and sunny day in late fall, on the heels of an unseasonable blizzard, Nicole Sobolik, a social worker and nutrition educator enrolled in the Chippewa Tribe, stands in this space, explaining the three sisters to a group of elementary school children. “It’s a really special garden,” she says

After the lesson, Sobolik guides the kids through a recipe to make pumpkin pie in a Ziploc bag. First, they crush graham crackers in their bags. Then they combine milk and cooked pumpkin, carefully supervised by teachers so they don’t make too much of a mess. Once this pie-in-a-bag is complete, they squeeze the mixture into cups before putting some whipped cream on top and digging in. The room grows quiet for the first time all afternoon, and the only sound is that of plastic spoons scraping against plastic cups.

While this pumpkin came from a can, people like Trottier and Ziegenmeyer hope that eventually, these kids will get to make pie using squash grown in the community garden—or perhaps even in small gardens in front of their own homes.

This story received support from the Solutions Journalism Network, a nonprofit organization dedicated to rigorous and compelling reporting about responses to social problems.