An Enormous Land Transition is Underway. Here's How to Make it Just. | Civil Eats

An Enormous Land Transition is Underway. Here’s How to Make it Just.

In the next decade, 400 million acres of U.S. farmland will change hands. A land justice advocate sees a timely opportunity to counteract entrenched income inequality and systemic racism. 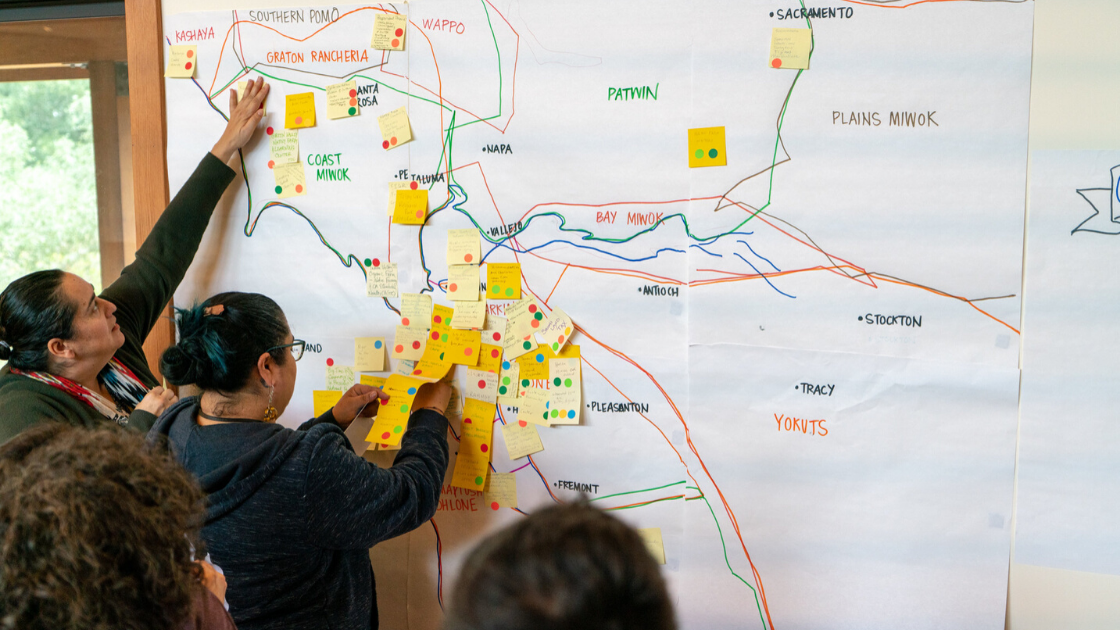 The land we occupy today has been stolen from the Indigenous peoples of this continent. This crime gets repeated every time land is bought and sold as a commodity. Anyone who has felt the sand between their toes on a beach, stood in awe of a mountain range, or laid their head to rest in a warm place they call home knows that land is not simply a commodity. Its value cannot be reduced to dollars and cents. In the case of the farmland that nourishes all of us, commodification has created a crisis in our food system that only a strong commitment to land justice can solve.

Farmland ownership is highly consolidated and racialized due to a long history of attempted genocide, dispossession, and slavery. Today, 8 percent of farms control over 40 percent of all U.S. farmland. The average American farm is now over 400 acres, (compared to 150 acres in 1940) and that number increases every year as smaller farms buckle under the weight of the capital-intensive industrial agricultural model. There is also extreme racial disparity between who labors on the land and who profits from it. Over 60 percent of farmworkers are people of color, largely Latinx. Meanwhile, white people own 98 percent of all farmland, or about 50 times the number of acres owned by people of color.

The symptoms of this unjust land ownership pattern manifest across our food system, disproportionately harming communities of color. We overproduce food, yet our people are chronically undernourished. Farmers get older and farmworkers die young. The use of technology on farms continues to go up, and as the greenhouse gas emissions from agriculture have increased 9 percent since 1990. At every turn, it seems the odds are stacked against a socially just future for farming. And yet, even as consolidation and racialized land ownership reaches what seems like its peak, a narrow window of opportunity is letting in just enough light for the seeds of justice to grow.

By 2030, as the current generation of farmers retire, about 400 million acres of farmland will change hands. For context, that’s 36 times the size of California’s Central Valley, often called the country’s breadbasket. How this land is stewarded will determine whether our food system can meet the demands of the climate crisis and sustainably feed us and future generations. Who gets this land will determine, in large part, whether we can repair the racial injustice on which our food system is built. Yet, while the transition is inevitable, justice is not.

As I write, the ultra-wealthy—including pension fund managers, private prison owners, and land speculators—are grabbing farmland as fast as they can. As Vann Newkirk notes in his must-read essay in the Atlantic, The Great Land Robbery, a single company—TIAA, one of the largest pension fund managers—now owns nearly as much land as all the Black residents of the Mississippi Delta region.

This trend has led to the continued legacy of dispossession of Black farmers, as well as the rise of absentee landlords like TIAA, which encourage monocultures and a return to sharecropping-style farming arrangements. Nonetheless, this ongoing transition of land represents an unprecedented opportunity for organizers in movements for food, land, climate, racial and social justice, who have a rare chance to redirect the flow of this land away from absentee landlords and into the commons.

To win, we need to mobilize more money than the public or private sectors have so far been willing to spend to acquire farmland for collective stewardship. This requires that we reject the notion of land as a commodity. The solution is to approach land stewardship following the principles of Indigenous leadership—to start by recognizing that land is not just a “thing” we use, but a relative we care for. Put another way, we need to democratize, decolonize, and decarbonize our collective relationship to farmland.

Several important projects are leading the way. And community land trusts—which provide a legal structure to remove land from the market and place it under community control—are a vital strategy. In New England and upstate New York, the Northeast Farmers of Color Land Trust is a community land trust led by people of color working to “rematriate land, decolonize ownership, and acknowledge land as a respected elder.” In Washington, workers from the farmworker union Familias Unidas por la Justicia formed a worker-owned coop farm. Now they’re establishing a land trust to own their farm as a community.

Tribal communities whose federal trust status has been terminated or never recognized have turned to land trusts as a strategy for regaining access to and control of ancestral territory. Many focus on food production as a way to reclaim and reconnect with cultural traditions. Agrarian Trust, a national organization of white allies, is building a decentralized network of community land trusts, called Agrarian Commons, to support land conservation for the next generation of farmers.

Last year, the Sustainable Economies Law Center—the organization I work for—became the fiscal sponsor for Minnow, a land project focused on preserving farmland, realizing land justice, and building leadership and power for people of color in California. This state has the largest agricultural economy in the U.S., fueled by a workforce of immigrants whose working and living conditions lead to a life expectancy one-third shorter than the average Californian. It’s also home to the largest population of Native people in the United States.

The price of farmland here has skyrocketed beyond the reach of most farmers. In the Sacramento Valley, for example, land values have risen 400 percent since 2005. Minnow exists to raise the cultural awareness and financial capital needed to facilitate a just transition of farmland into community control, under Indigenous governance, off the speculative market, and for farmers of color. Acting as part land trust and part land acquisition fund, Minnow will raise gift capital from philanthropy to purchase and permanently protect farmland, while simultaneously pushing for policy change that increases public resources for similar efforts.

The seeds of land justice and food sovereignty have been sown. What we need now is rain.

A just farmland transition demands no less than a billion dollar private and public investment in the next decade. Charitable foundations have both the capacity and the moral obligation to ensure that a significant portion of the land changing hands in the next decade advances community control, indigenous sovereignty, and climate justice. The $1 trillion that U.S. foundations control is inextricably linked to the dispossesion, attempted genocide, and enslavement that built the economy and generated their wealth. It can also buy a lot of land. Yet only about 7 percent of those trillion dollars is distributed each year, and hardly any of it goes directly toward supporting community ownership of land. Charitable foundations must take the opportunity to catalyze a just transition for farmland by taking action to respond to the call: What about the other 93 percent?

Meanwhile, the effective organizing by grassroots groups, including the National Black Food and Justice Alliance, Rural Coalition, National Young Farmers Coalition, and Climate Justice Alliance, has created space for a renewed national conversation about farmland ownership. Some lawmakers are joining in that conversation with legislative proposals such as the Green New Deal. We also see this trend in presidential candidate policy platforms, like those of Senators Elizabeth Warren and Bernie Sanders.

In 2017, the Law Center joined a group of farmers and advocates in California, united under the banner of the California Farmer Justice Collaborative, to pass The Farmer Equity Act. The Act was a call to action for the state department of agriculture to increase support for the state’s fastest-growing demographic of farmers—people of color. Last year, the Collaborative proposed further legislation to invest in land ownership opportunities for those same farmers through community land trusts and cooperatives.

In the next decade, we can rewrite the story of our collective future—one that manifests indigenous sovereignty, reparations, and a livable climate. Winning land is a precondition not only for a racially equitable food and farm economy, but for a real, thriving, and inclusive democracy. And, true to the definition of democracy, we all have a role to play.

Top image: A March 2019 gathering of 30 Indigenous sovereignty, housing justice, and food justice organizers convened on the territory of the Federated Indians of Graton Rancheria to discuss land justice as well as other issues facing Indigenous Californians. Photo by Mateo Hinojosa at The Cultural Conservancy.

Neil Thapar is the Food and Farm Program Director at The Sustainable Economies Law Center. Neil researches, promotes, and advises on alternative legal structures of ownership that promote affordability, community ownership, and long-term sustainable stewardship. From worker-owned farms to community land trusts to land cooperatives, Neil supports the development of a racially just food and farm system that de-centers the individual and re-centers the collective. He builds partnerships with a wide range of organizations to learn about and address legal and policy challenges to achieving transformative change. Neil is an ally-member of the California Farmer Justice Collaborative, a statewide group of farmers and advocates focused on empowering farmers of color to participate and represent themselves in California's food and farm system. From 2014-2016, Neil led the Law Center's Save Seed Sharing campaign, successfully protecting people’s rights to share seeds with each other. In 2014, Neil led the legislative campaign to pass the Neighborhood Food Act, expanding access to backyard food production for tenants and homeowners in planned developments. Read more >