The union has been fighting for higher wages, healthcare, and workers’ rights for decades. Now many of its members are concerned about losing their benefits and it has refused to endorse Bernie Sanders—or any candidate—in the Nevada caucus. 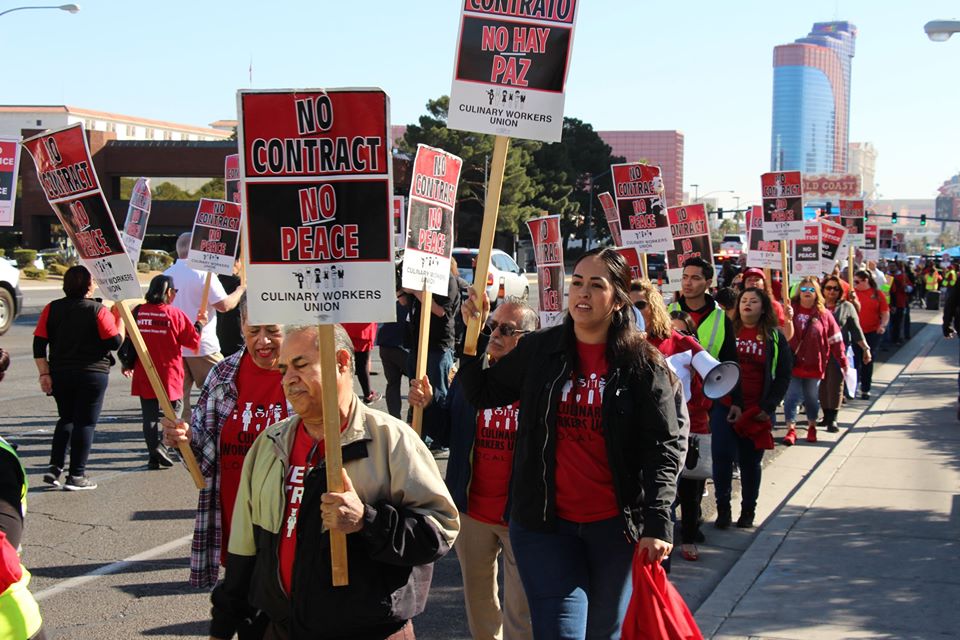 As an undocumented fast-food worker, Martin Macias has struggled for years to access decent healthcare. The 55-year-old Nevada resident, who does maintenance for McDonald’s, is not part of a union and his schedule doesn’t allow him to prioritize his health.

“Working at a fast-food restaurant, you don’t have days to take off to go to the doctor,” Macias said. “Sometimes I have to go to work sick. That brings a lot of bacteria to the workplace, and that’s a problem.”

A Mexican native who has lived in the U.S. for 33 years, Macias often relies on natural remedies to treat his ailments. Other times, he visits community clinics, which don’t always provide doctors’ notes for his employer. And before the clinics agree to treat him, he said, they demand to see proof that he can cover his medical expenses. A health insurance plan would eliminate many of these problems, but Macias says he can’t afford the $260 monthly bill.

Healthcare barriers like these led to tragedy five years ago when his wife, Tomasa, fell ill on the job. Undocumented and uninsured, she worked as a housekeeper in a Las Vegas casino.

“She was working and she had a stroke, and the first thing [the hospital staff] asked was if she was documented,” said Macias.

When she admitted that she wasn’t, the doctor delayed giving her a life-saving injection, leading to her death, according to Macias. 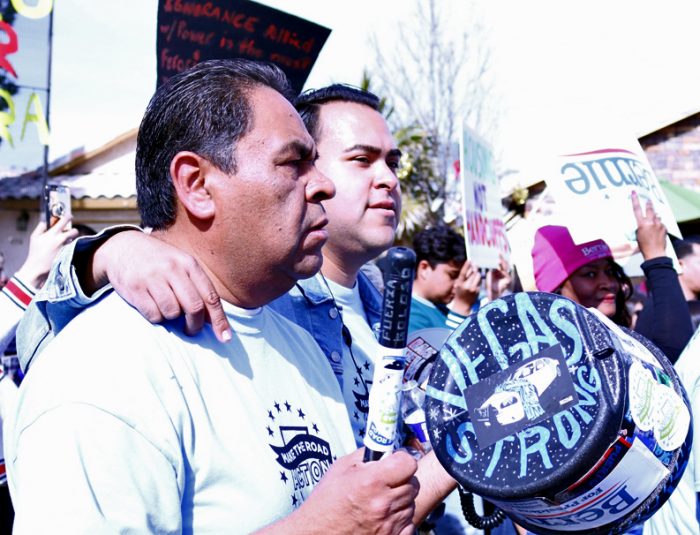 Now, the father of three and member of immigrant advocacy group Make the Road Action, says health care is his biggest priority as a voter. But his perspective on the topic differs markedly from that of Nevada’s Culinary Union (NCU), Local 226, which represents food workers like him. The 60,000-member union, which launched a healthcare fund for its members in the 1960s, has a significant presence in the state.

So, when the union recently opted not to endorse a Democratic presidential candidate, the move was seen as a blow not only to front runner Senator Bernie Sanders, but also to his rivals, who vied for its support. And NCU members’ open criticism of the Medicare for All plan—which would implement government-run universal healthcare and eliminate private insurance—has led to tensions with the Sanders campaign in the days leading up to the Nevada caucus.

“Workers should have the right to choose to keep the health care Culinary Union members have built, sacrificed for, and went on strike for 6 years, 4 months, and 10 days to protect,” Geoconda Argüello-Kline, Local 226’s secretary-treasurer, said in a Feb. 12 statement.

However, non-union food workers like Macias say that Medicare for All would literally be life-changing.

“Medicare for All is a plan for everybody,” Macias said. “In comparison with the other candidates’ plans, Bernie Sanders’ health plan pretty much includes everybody, even undocumented people.”

“For a hundred years, from Teddy Roosevelt to Barack Obama, this country has been talking about the need to guarantee health care for all people,” Sanders said when asked about the Culinary Union’s concerns. “We’ve got 87 million [people] who are uninsured or underinsured, we got over 60,000 people who die every year because they don’t get to a doctor on time… 500,000 people go bankrupt every year because they can’t afford medical bills.”

Sanders also promised, “never to sign a bill that will reduce the healthcare coverage [union members] have.” He vowed to “only expand it,” a point that Senator Elizabeth Warren echoed.

Local 226’s concerns about Medicare for All have emphasized its political clout in the Silver State while shining a light on the vast disparities in healthcare access between union and non-union culinary workers. 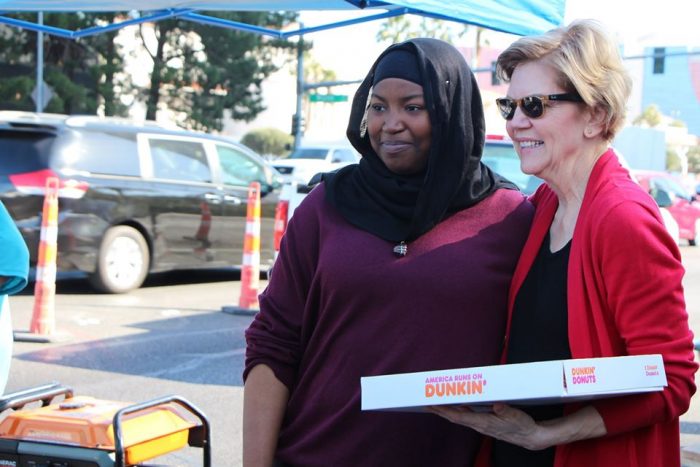 Senator Elizabeth Warren, Mayor Pete Buttigieg, Vice President Joe Biden, Tom Steyer, and Senator Amy Klobuchar all showed up at a recent rally outside a casino in Vegas to support the Nevada Culinary Union’s demands for a fair contract.

Nevada’s Culinary Union has been fighting for higher wages, healthcare, and workers’ rights for its members since 1935. The workers it represents come from diverse backgrounds—its membership is roughly 55 percent women, 54 percent Latinx, 19 percent white, 15 percent Asian, and 10 percent Black. The fact that women of color make up a large part of its membership has helped it succeed, according to Kate L. Bronfenbrenner, the director of labor education research at the Cornell University School of Industrial and Labor Relations.

“The tourism industry is not the main reason the union is strong, the large numbers of Black and Latino women in the union are—because those workers are most likely to stand up and file grievances,” Bronfenbrenner said.

These union workers include guest room attendants, cocktail and food servers, porters, bellmen, cooks, and bartenders, as well as laundry and kitchen workers. The nation’s largest local affiliate of Unite Here, Nevada’s Culinary Union has initiated several successful strikes, lasting from days to years. Most notable was the Frontier Strike, during which 550 hospitality workers walked off their jobs at the Frontier Hotel and Casino in Las Vegas while demanding more pay and better treatment. That action lasted from September 1991, to February 1998, and is still considered the longest successful strike in U.S. history. 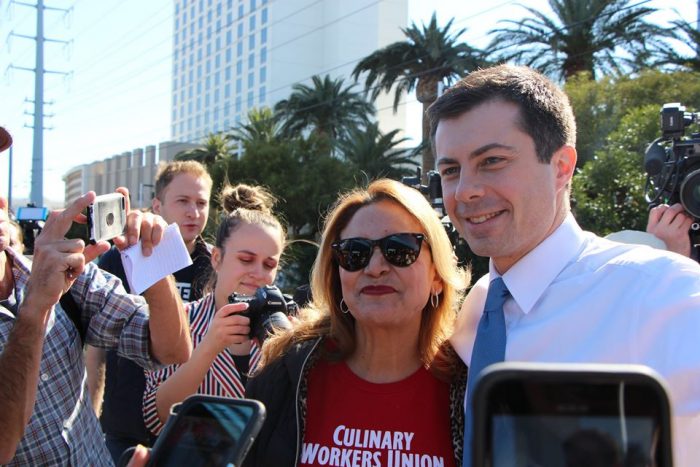 Mayor Pete Buttigieg poses with a member of the Nevada Culinary Union at a recent rally.

Bronfenbrenner pointed out that the union’s numbers—which have grown from 18,000 in the 1980s to more than 60,000 today—and history of organizing has led to its many victories.

“It’s a union that has incredible density in Las Vegas, which means it has much more bargaining and political power than unions normally have in the state,” she said. “It has that power because it has organized and kept organizing, and most unions don’t do that. They never stopped organizing, and their members built ties between the union and the community.”

Megan Jones, a Nevada-based Democratic political strategist who served on the staff of former Senator Harry Reid, pointed out that the uniqueness of Las Vegas has given the union particular leverage.

“This is a service industry town and the people who work for the Culinary Union are the lifeblood of that industry,” said Jones. “They work day in and day out to make sure that Las Vegas is one of the top tourism destinations for over 40 million visitors a year.”

Since the 1960s, the Culinary Union has offered comprehensive health coverage for its members and their families—currently totaling more than 130,000 people. And in 2017, it opened a health center to improve its membership’s access to primary, preventative, pediatric, urgent, dental, and vision care. With its 24-hour clinics, salaried physicians, modest copays, and direct contracts with hospitals, the plan has been described as far superior to most.

Late last week, Suzanne Poquiz, a former housekeeper at the Flamingo Las Vegas Hotel and Casino, visited the health center to receive treatment for her COPD-related respiratory illnesses. Health problems forced the 61-year-old to quit her job in 2013, but she continues to receive Culinary Union healthcare through her husband, a porter at the Mandalay Bay Resort and Casino.

“People like me, we really need healthcare, and the union pays most of my bills,” she said. When it comes to the caucus, Poquiz is rooting for Senator Amy Klobuchar, who happened to be touring the health center during Poquiz’s recent medical visit, because she thinks the Midwesterner will leave her healthcare plan intact.

“I’m going to stick with Amy,” Poquiz said. “Bernie Sanders said he was going to knock us off our plan because of Medicare for All, because it was for everybody.”

“I want to be clear,” she said. “I’ve been to the Culinary Union’s health care facilities. They’re terrific. You don’t want to shut them down; you want to expand them. You want to see them all across Nevada and all across this country.”

The Sanders campaign did not respond to a request for comment about Medicare for All.

What about the majority of culinary workers and other Americans—in unions or otherwise—who don’t have access to group healthcare plans?

“I feel sorry for those people,” Poquiz said. “I try to tell them they should join the Culinary Union.”

The union’s concerns about Medicare for All have made so many headlines that SEIU officials spoke out about it earlier this week to Fox News, calling it “a false choice.”

“While some working people have good health care plans through their jobs, many do not. Access to quality health care shouldn’t be based on luck, it should be a right,” SEIU officials said.

The leadership of Culinary Union 226 agrees that health care is a right, but its disapproval of Medicare for All has escalated political tensions in Nevada, the most racially diverse state to hold a nominating contest so far. Since Sanders is ahead in statewide polls, his rivals, including Buttigieg and Steyer, have taken shots at the Vermont senator in campaign ads.

On Wednesday, Buttigieg, Warren, Biden, Klobuchar, and Steyer marched with Culinary Union 226 workers fighting for a labor contract with Station Casinos. On the debate stage that night, Buttigieg followed up by attacking Medicare for All and accusing Sanders of being “at war” with the union.

Strategist Megan Jones said that in addition to fighting on the heathcare front, “The Culinary Union is interested in making sure we have a candidate who is prepared and vetted, who can take on Trump. It’s going to be a very tough general election, frankly, with what’s at stake.”

For this reason, and the fact that Democrats have several candidates to choose from, Bronfenbrenner said that Local 226 was wise not to endorse any of the contenders.

“They chose not to endorse to avoid dividing their members,” she said. “The labor movement is divided by age. Younger members are supportive of Bernie Sanders and older members are not.”

The generational divide in the union also leads members to view their healthcare plans differently, Bronfenbrenner continued. Younger members may not have had to fight for their healthcare benefits yet, while their older counterparts have. Moreover, younger workers may also be worried about their friends and family members who lack medical coverage. Those workers may be more likely to be in favor of the idea of providing everyone with healthcare.

Macias, for one, said that he feels that Culinary Union 226 needs to look beyond its members to other food-service workers like himself—and large swaths of the state’s population—who struggle to access healthcare.

“The Culinary Union [does] not stand for the whole Latino community,” he said. “Their plan wouldn’t include me going to the clinic. It doesn’t do anything for me.”