Photo Essay: Bringing the Butcher to the Farm | Civil Eats

Photo Essay: Bringing the Butcher to the Farm

For the past 20 years, farmers and ranchers on a remote Puget Sound island have held onto a lifeline of the first USDA-certified mobile slaughterhouse. The project has since spread nationwide. 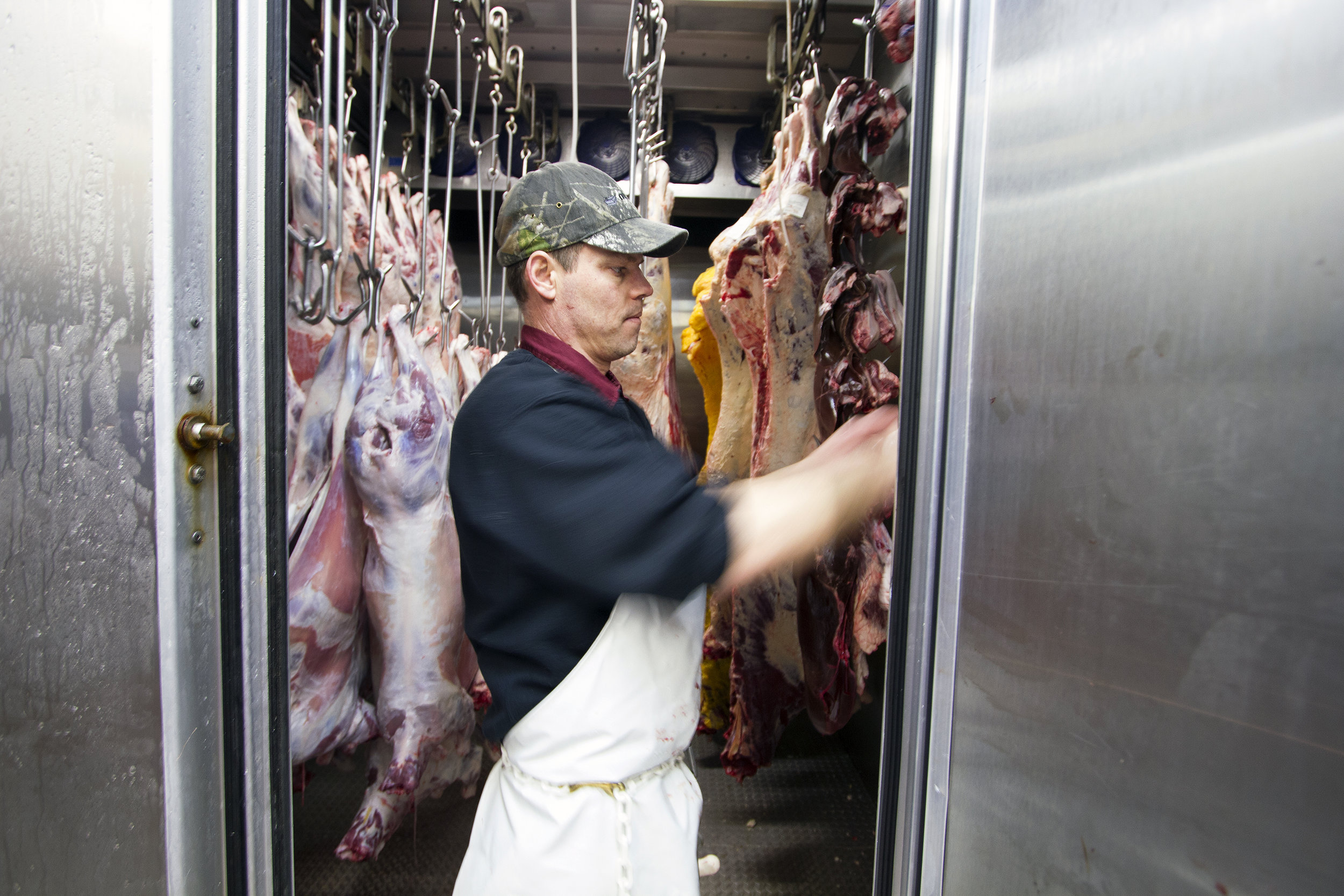 Ranchers on the remote San Juan Islands in Washington’s Puget Sound found themselves suddenly facing a major problem. In the 1990s, slaughterhouses and butcher shops were closing down at an alarming rate due to changes to United States Department of Agriculture (USDA) industry standards. The mom-and-pop businesses farmers had relied on for years were forced to make drastic and expensive changes or close, and many simply couldn’t afford to update their facilities.

This left the small independent farmers of the islands suddenly without places to process their livestock. For some, the closest USDA certified butcher shops would require them to ship their cattle by ferry to the mainland and then drive them roughly 200 miles to the nearest processor—or close down entirely, like the local butcher shops before them.

Just after the turn of the century, Bruce Dunlop, one of the farmers on the San Juan Islands affected by this change, and Jim Wieringa, manager of the Island Grown Farmers Co-Op (IGFC) in the nearby town of Bow on Washington’s mainland, had a bright idea: Why not bring a USDA-certified slaughterhouse directly to the farms?

Their idea evolved into the first USDA-certified mobile slaughter unit in the U.S., a literal slaughterhouse on wheels, equipped with a generator for power, running water, self-contained refrigeration, a winch to haul livestock, and the ability to process eight cows, 24 hogs, or 40 sheep per day. Designed by Dunlop and overseen by Wieringa, the original unit has since served more than 60 island and mainland farms in Washington state for nearly 20 years.

But Dunlop didn’t stop there, and over the last two decades he has replicated his mobile unit more than 30 times across the U.S., Canada, and around the world.

Regardless, they said, in the right circumstances, mobile units are a great alternative for farmers. “It can be stressful for an animal to move long distances, so this can be a more humane option,” they said.

For Michael Amado, president of the Hawai‘i Island Meat Cooperative (HIMC), humane slaughter and a lack of slaughterhouses were what made them decide to implement a mobile unit for the farmers of Hawai‘i. “There previously were more than two dozen fixed kill floors on the island; but as regulations changed, many were unable to comply and had to shut down. Which leaves us with the two fixed kill floors that we have today,” he said.

When they saw options running out for local farms, HIMC raised money publicly, and through state and federal grants, was able to launch its own mobile unit, which has run since 2014—complete with training from Jim Wieringa of the IGFC.

HIMC now helps to process animals from over 30 island farms that would have likely shut down otherwise due to the lack of processing plants.

“We’ve helped a large mix of farmers because of the lack of options, including one of the biggest ranches on the island, farmers with only one or two animals, and all of the misfit farmers that don’t fit into the bigger picture,” Amado said. All of which, he continued, would never have been possible without one of the most unique small-farm innovations out there—the cooperative’s very own slaughterhouse on wheels.

The photos below display a day in the life of the USDA mobile slaughter unit and the farmers and butchers with whom they work. 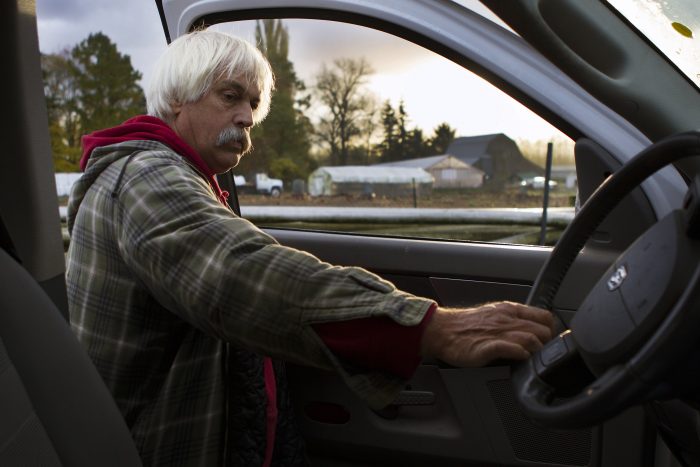 In the early hours of the dawn, a farmer and Island Grown Farmers Cooperative member in Bow, Washington, gets into his truck to meet the unit on site for slaughter. 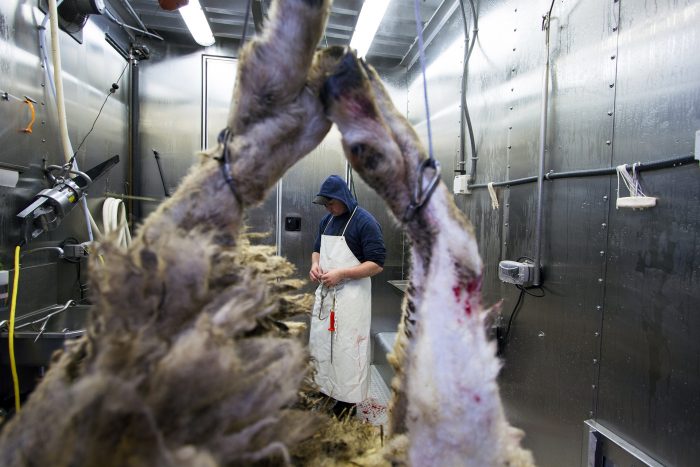 William Cote, butcher with the Island Grown Farmers Cooperative, takes a moment in preparing for the next step in processing a sheep inside the nations first USDA-certified mobile processing unit. 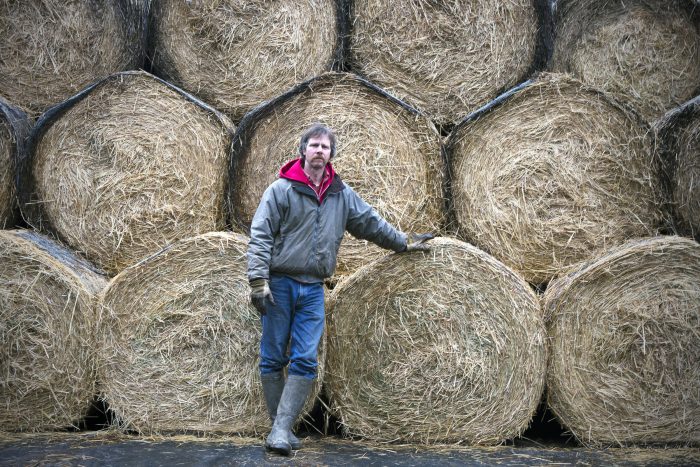 Scott Meyers, the owner of Sweet Grass Farm on Lopez Island, has been working with the mobile unit for nine years. He runs a herd of 120 Wagyu or Kobe beef on his 325-acre farm and sells his meat directly to his consumers. 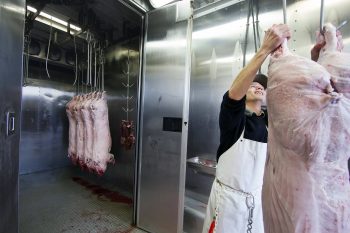 Jim Wieringa slides a freshly dressed pig into the truck to be transported to the cut-and-wrap facility. 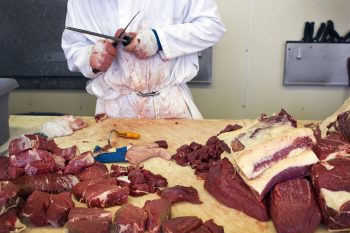 A butcher at the Island Grown Farmers Cooperative cut-and-wrap facility carves the meat for sale at the market. 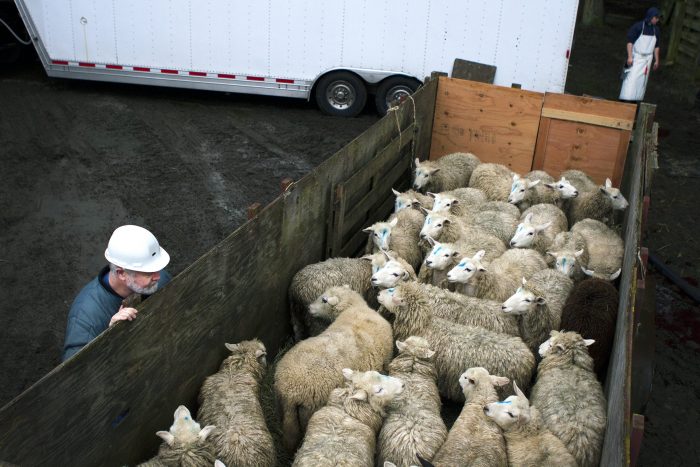 A pen filled with sheep wait for the butchers in front of Coffelt Farm Stewards on Orcas Island. One unit, one USDA inspector, and two butchers can process 40 sheep a day—“serving the needs of the islands and the mainland as needed,” said Ruthie Dougherty, director of the farm. She said she would like it to stay small and personal: “I think small is beautiful.” 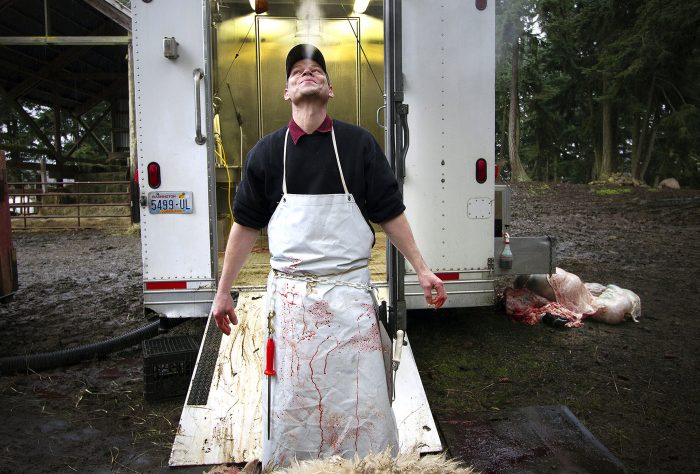 Jim Wieringa smokes a cigarette after slaughtering the last sheep of the day. “The mobile units won’t supply the world’s needs, [but] it will supply the local needs. It’s going back to the way things were, there were mom-and-pop shops all over, but they’ve disappeared over the years. And it’s starting to come back with these mobile units.”

Top photo: Jim Wieringa hangs the last of the fresh meat and edible organs in the cold storage room of the truck.

Lauren Owens Lambert is a photojournalist based in the Boston area whose work has a creative focus in documenting the human aspect of conservation and climate change research. Read more >