Farmers in Maryland and Iowa are investing in crops that improve water quality, soil health, and build resiliency in the face of climate change. 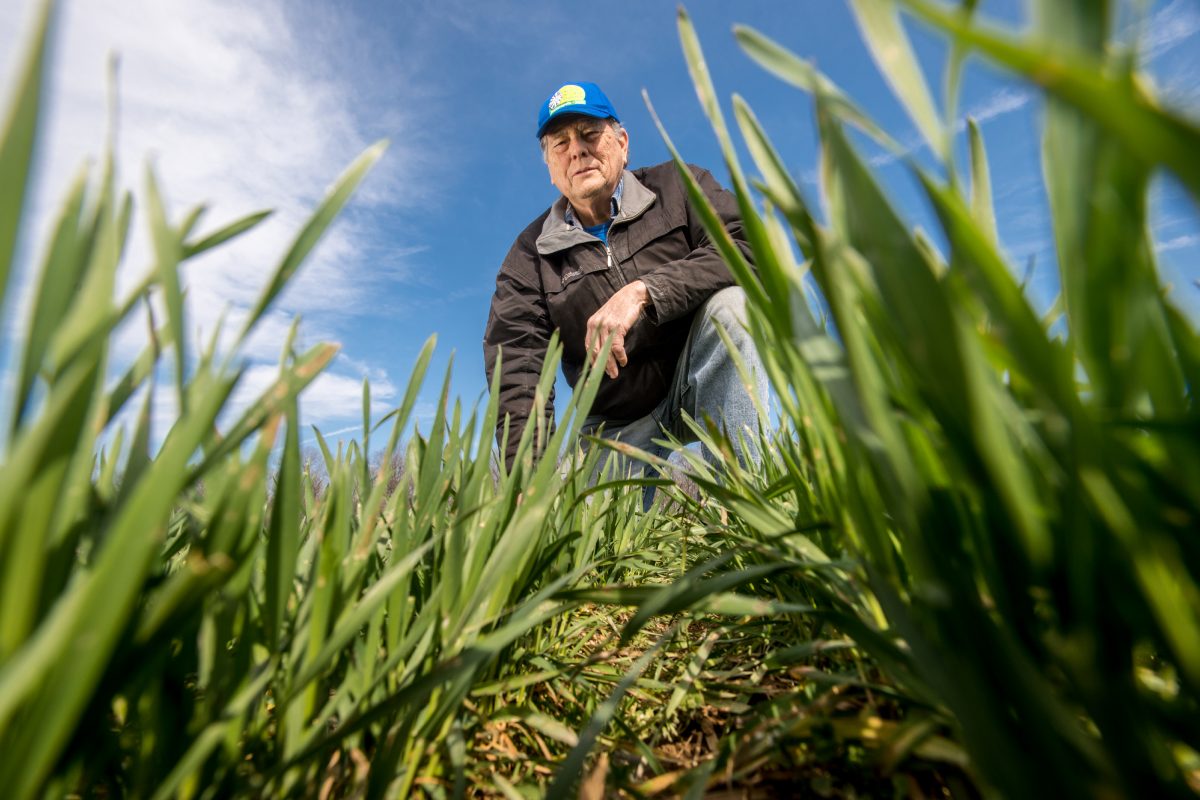 Lewis Smith farmed about 330 acres of corn, soybeans, and wheat near Easton, on Maryland’s Eastern Shore. He was the fourth generation to work the land, and while he carried on his family’s tradition, he began to do a few things differently in the 1980s.

While thousands of small and mid-sized operations like his were going bankrupt during the Farm Crisis, he began to experiment with eliminating tilling, the process by which most farmers turn over soil to control weeds and prepare for a new crop, for the time and labor savings. “For me, at the very beginning, it was a curiosity thing,” Smith said.

At the same time, researchers at the nearby Wye Research and Education Center at the University of Maryland, where Smith also worked on agricultural research for a time, were looking at cover crops as a strategy to reduce agricultural runoff into the nearby Chesapeake Bay. Smith thought planting cover crops could complement his no-till strategy, and he was right.

“There was an immediate benefit in moisture retention, because we don’t have irrigation. That’s one thing you see right away… [we] could withstand dry weather a little bit better,” he said.

By the time Smith retired in 2016, he was far from an outlier; Maryland had become a model of cover crop adoption. On a drive down the length of the Eastern Shore’s main highway on a chilly January day, the majority of the fields were covered in just-sprouted beds of crimson clover and winter rye. A few had signs stuck into the dirt declaring “Cover Crops… protecting the Bay.”

“It was a little slow catching on,” Smith said, “but it’s pretty widely accepted now.” 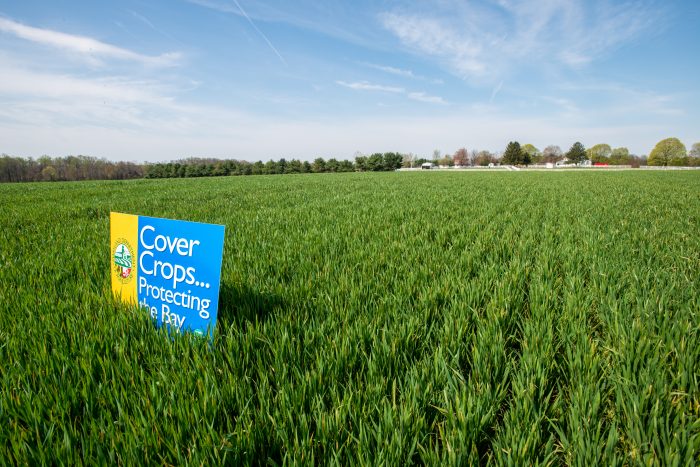 Indeed, cover crops are now one of the most common, accessible agricultural strategies for improving soil health and water retention and preventing nitrogen pollution in water and erosion—to the benefit of both the environment and the farmer. Some early science also shows that cover crops can improve the ability of soils to store carbon.

According to the latest agricultural census, the percent of U.S. cropland planted with cover crops increased by 50 percent between 2012 and 2017, from just over 10 million acres to more than 15 million. But those acres still only account for about 4 percent of the nation’s total cropland.

In Maryland, however, Politico reported that farmers planted cover crops on more than 43 percent of the commodity corn, soybeans, and cotton acres in 2017, and numbers reported by the state department of agriculture since then have been upwards of 50 percent. That percentage is the highest in the country by a long shot; other Northeast states report more than 30 percent of cropland in cover crops, but many Midwest states come in at under 5 percent.

Corn Belt states like South Dakota and Iowa, however, have exponentially more farmland to start with. Iowa’s 3.7 percent of commodity acres in cover crops, for example, amounts to close to a million acres, double Maryland’s numbers. And cover crop acreage increased in Midwest states between 2012 and 2017 at much higher rates compared to the Northeast, with Iowa’s acreage more than doubling in five years.

A closer look at what has driven cover crop adoption in these two settings—one where it’s become well-established over decades and another where current momentum is stronger than ever—provides insights into how local regulations, financial incentives, and climate-related impacts are causing farmers to put these lesser-known crops in the ground.

It’s About the Bay

Maryland’s cover crop story starts with the Chesapeake Bay, a rich ecosystem that combines freshwater from streams and rivers with saltwater from the open ocean. The Chesapeake watershed covers 64,000 square miles and contains more than 100,000 rivers and streams in six states and Washington, D.C. The Bay is a hallmark of life in Maryland, from a vacation spot to the source of the region’s famous blue crab.

In 1983, when the U.S. Environmental Protection Agency (EPA) released the results of a seven-year study that documented the Bay’s systemic decline, there was significant political will in the state to save it. That study identified eutrophication—excess nutrient pollution—as a noteworthy cause of the bay’s disrupted ecosystems.

“[Attention to] eutrophication problems emerged in coastal areas… and the Bay was one of the first places that it really got prominence,” said Kenneth Staver, a commodity grain farmer and research scientist at the Wye Center who has been studying nutrient flows in agriculture for 35 years. “So that sort of drove the focus here.”

Staver’s team examined dissolved nitrogen and phosphorous from fertilizer use on crops and looked how those nutrients traveled to the Chesapeake. They discovered that a lot of the nitrogen was getting into groundwater during the winter months, when precipitation moved through the soil and there were no plants in the ground to take up the water. “During the growing season, you have nitrogen out there because you fertilize the fields to grow the crop, but the risk of loss is not so high because the [plant] water use is so high,” he explained. 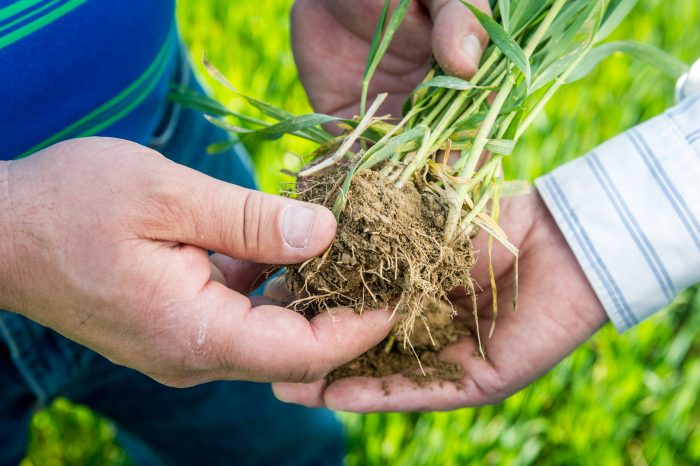 Planting a crop to uptake that water during the winter, then, made a lot of sense as a potential solution. “It soon became obvious that it was good to grow cover crops to pick up excess nitrogen that was leftover,” Smith said.

Staver said the first programs to help farmers with the cost of planting cover crops started in the ‘90s, but over the years, they became more generous and established. But farm pollution in the Chesapeake continued.

Then, in 2010 the EPA established pollution limits for nitrogen, phosphorous, and sediment in the Bay, called the TMDL (Total Maximum Daily Load) and all of the states in the watershed were required to submit plans to meet those limits by 2025. (A review of progress towards that goal was released in December, showing that the goals are unlikely to be met, but that Maryland has made significant progress while neighboring states such as Pennsylvania.)

Increasing cover crop acreage was a part of Maryland’s plan, and the state agriculture department now offers one of the country’s most generous financial incentives, paying about $45 per acre, with significant bonuses added for practices like early planting.

Cover crop seeds present a cost, and the planting process can be a real commitment, so those funds have helped drive the numbers up. “It was viewed positively as a practice … but it pretty much comes down to a financial issue,” said Staver.

Several programs now offer financial reimbursement for planting cover crops all over the country, through both state agriculture departments and the U.S. Department of Agriculture’s National Resource Conservation Service (NRCS).

Rob Myers is a professor at the University of Missouri’s College of Agriculture and the regional director for Sustainable Agriculture Research and Education (SARE) and has studied and published reports on the economics of the crops. He said most farmers pay around $30 per acre to plant these crops, but adds that he encourages them to look at investing in cover crops the way they invest in expensive farm equipment. That’s because other costs go down to balance out the price, bringing it down over time, to about $15-20 an acre in the second year, with the farmer breaking even after the third year.

“It’s a modest increase in yield that typically occurs as the soil health improves. And then the majority of farmers … start to find some savings in their input costs. They may cut back slightly on fertilizers or herbicides, or maybe they’re making less trips over the field for tillage.”

In the Midwest, communicating those potential benefits is key. While nitrogen and phosphorous pollution is a serious issue, it ends up in the Gulf of Mexico, where dead zones are out of sight for most farmers.

In 1997, the EPA launched a taskforce to address hypoxia (a symptom of eutrophication that causes dead zones) in the Mississippi River/Gulf of Mexico Watershed. In 2008, things picked up when it issued an action plan that called for states in the watershed to develop nutrient reduction strategies, including expanding cover crops.

“If I’d come into this 10 years [earlier], I don’t know if we would have been as successful. I doubt we would have been,” said Sarah Carlson, the strategic initiatives director for Practical Farmers of Iowa (PFI), a group that has been at the center of efforts to expand cover crops across the state in recent years.

In 2017, the department also launched a three-year demonstration project that offered a 5 percent crop insurance discount to farmers planting cover crops. An increase in federal funding through the USDA’s Environmental Quality Incentives Program (EQIP) has also helped spur recent expansion of cover crops in Iowa, while private companies including Unilever and Cargill are also paying farmers to plant them.

Those financial incentives, paired with PFI’s grassroots approach to farmer-led research and promotion, Carlson said, have worked in tandem to drive enthusiasm for the practice. “We hit a sweet spot with momentum for cover crops across the corn belt, we jumped on it with the early adopters, we had those early adopters spread the word, and then, at the state level, we had a lot of support for the message.”

Carlson also said that when PFI began working on cover crops, most farmers saw them as a solution to improving water quality and reducing soil erosion, but that over the years she’s heard more feedback on the economic benefits. “They started saying things like, ‘I’m going to spend less on herbicides,’” she said.

And while efforts to significantly step up funding for EQIP, NRCS, and other conservation funds may have stalled out in negotiations around the 2018 Farm Bill, another factor may end up driving cover crop conversion rates much faster than government support: an increase in extreme weather.

Last year, for example, when heavy rains caused flooding that disrupted planting, Carlson said farmers who had been planting cover crops for many years reported getting back to planting and harvesting their crops days before their neighbors, who watched with curiosity.

“There’s science that says we get better water filtration and soil structure with cover crops, but farmers might not know what that’s going to look like,” Carlson said. “It looks like pulling their equipment out of the mud [sooner].” 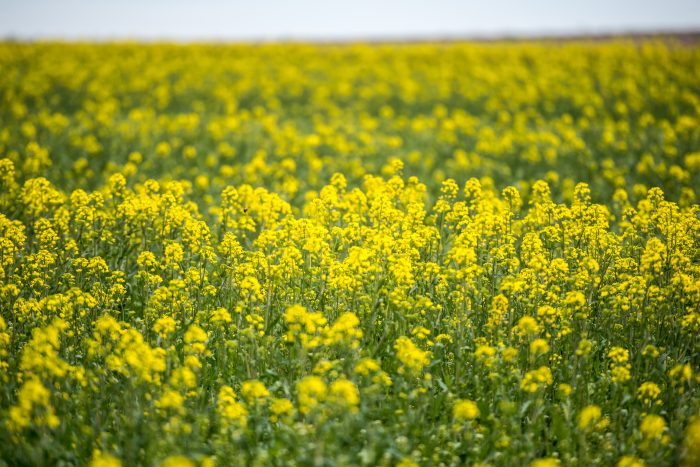 Canola flowering in Harford County Maryland. Courtesy of the SARE.

Myers, at SARE, says that while farmers who plant cover crops are slightly (1 to 5 percent) more productive in a year with normal weather, drought is a different story. In 2012, when farmers in the corn belt and parts of the Southwestern U.S. encountered a severe drought, those who had planted cover crops fared significantly better. In fact, their yields were 9.6 percent better for corn and 11.6 percent better for soybeans. In hard-hit states like Nebraska, Myers said, the contrast was even more stark.

Years of having a diverse set of roots in the soil meant rain could penetrate better, the soil could act like a sponge to hold the rain, and the mycorrhizal fungi that had built up in the soil could help the plants extract more water and nutrients. “If a farmer is in a situation where they’re more likely to have yield losses due to weather extremes, they are more likely to benefit,” Myers explained.

As climate change makes weather even less predictable, that factor could mean more cover crops will be going in all across the country in the years to come.