Feed the Mass Aims to Bring Affordable Cooking Classes to Everyone

Offering free and affordable updated home ec classes, the Portland, Oregon nonprofit seeks to fill the culinary and health gap in its community. 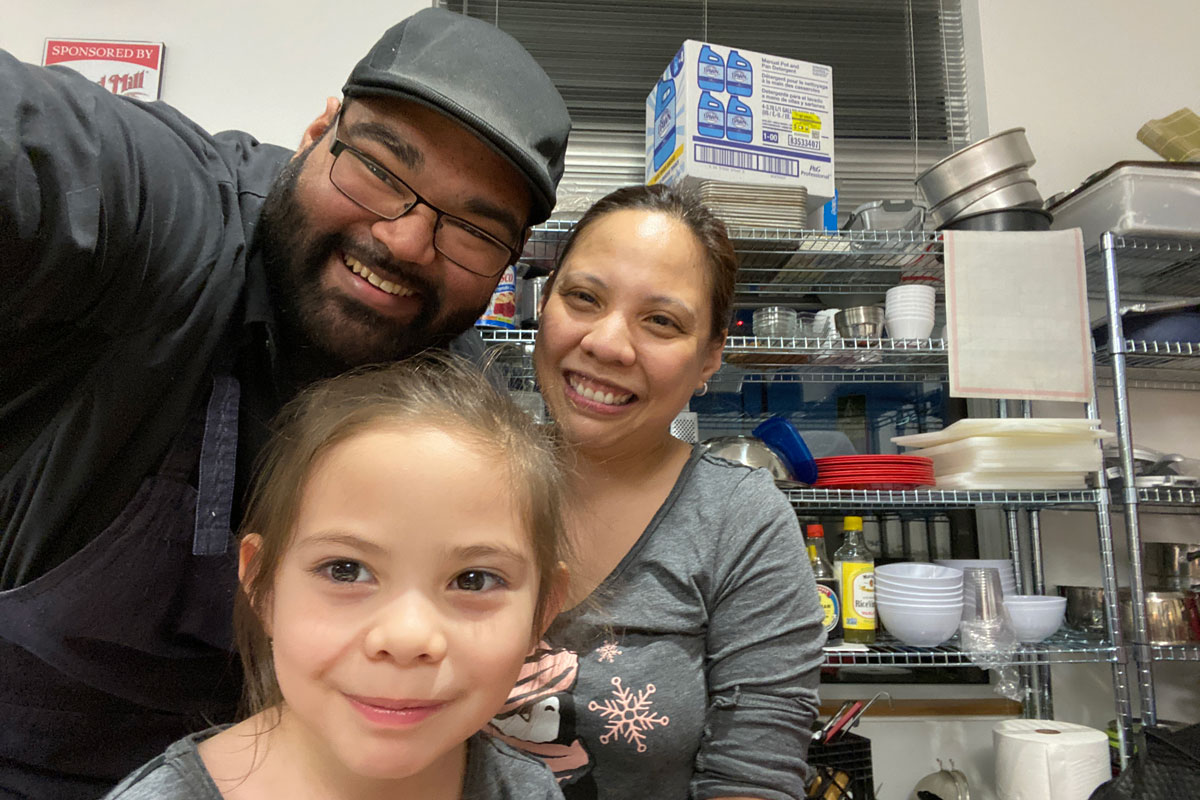 On a recent Monday night, Jacobsen Valentine stood before a classroom filled with around a dozen adults and showed them how to make tamales. After mixing Maseca flour with baking powder and salt, he added shortening. “You want to make it flaky—try to get all the lumps out so it feels like wet sand,” he said, before adding a little bouillon and folding the masa down with a sushi paddle.

This is just one of the many classes offered by Feed the Mass (FTM). Valentine, 31, founded the nonprofit cooking school four years ago because he saw a need for affordable culinary education in his hometown of Portland, Oregon.

At the time, there were plenty of cooking classes in food-focused Portland, but they all cost $60 to $100 to attend. Valentine, who was managing the local chain Killer Burger at the time, wanted to offer classes that were accessible to everyone, especially low-income folks.

Feed the Mass’ curriculum is focused on whole foods made from scratch. Valentine usually offers a vegetarian option, and also tries to accommodate those who are dairy-free or gluten-free. The classes cover everything from tamales and dumplings to vegetable soups and Mexican mole, and range from $20 for “Little Chefs” (for kids ages 4-10 and a parent or guardian) or Family Night classes to $30 for the community classes. Ambitious chefs-to-be can also buy a three-class pass for $75. The price includes all ingredients—and the students get to eat what they make, of course.

And for those who can’t afford the fees, Valentine offers full scholarships. “You have to have under $30,000 household income and write a short little essay [explaining] why you want [to attend],” he said. Nearly 50 people received scholarships last year out of 1,200 total students. The scholarships are funded through the class passes and two annual fundraisers—one in June and another in December.

Diet-related diseases are at an all-time high in America, increasing the risk of chronic illness and premature death. And although Oregon is a coastal state often associated with the farm-to-fork movement diabetes affects around 1 in 8 adults.

There’s a consensus among public health experts, doctors, and educators that any long-term solution to the epidemic of diet-related illness will have to include instruction in basic food preparation and meal planning skills.

“Research suggests that frequent consumption of restaurant food, take-out food, and prepared snacks lowers dietary quality, and that food preparation by adolescents and young adults may have the opposite effect by displacing poor choices made outside the home,” wrote two Tufts University nutrition scientists in a 2010 paper published in the Journal of the American Medical Association.

The paper argued that any long-term solution to the pediatric obesity epidemic will need to include a modern-day home economics curriculum in public high schools—”a version of hunting and gathering for the 21st century.” Though this hasn’t happened en masse over the past decade, affordable or free cooking classes like the ones at Feed the Mass are trying to fill the gap. 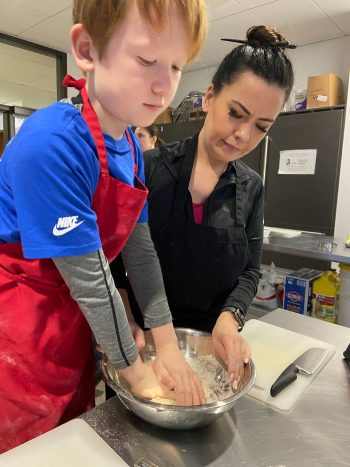 Maria and her son make dough during a Feed the Mass class.

Valentine chose the name Feed the Mass as a nod to the Biblical story from Mark 8. In it, Jesus feeds a crowd of 4,000 people with seven loaves of bread and a few small fish.

“It teaches us that if we share what we have, there will always be enough,” Valentine said. He grew up attending non-denominational Christian churches in Hawaii and Portland and currently attends Grace City Portland.

In most classes—even the ones that include kids—Valentine and his staff teach basic knife skills. Nekicia Luckett, a regular FTM volunteer, recalls working with an eight-year-old who had “great knife skills.”

In the tamale-making class, Valentine demonstrated how to chop an onion and then took out some pre-peeled garlic cloves. “Garlic, you devious bugger!” he said, eliciting some laughs from his students. He sliced the garlic into thin slivers, and said, “A garlic press is fine—but you don’t need all these fancy implements!”

Valentine often stresses that having a well-equipped kitchen doesn’t cost much—you can get all the basic pots, pans, knives, and cutting boards for $100. He’s begun selling chef’s knives for $15 because he realized many people who come to his classes don’t have this essential cooking tool.

The students chatted as they sliced up heaps of mushrooms, garlic, onions, and jalapeños for the black bean vegetarian tamales, or shredded roasted chicken for the chicken and cheese tamales. After methodically filling their tamales, and while they were steaming in an 8-quart Instant Pot, Valentine told the class that all the ingredients (including the corn husks) came to a total of $40. “That’s enough tamales for four to six families,” he said. “And we’ll have plenty for you to all take some home.”

Some of the students at that night’s class were regulars, but for many it was their first time at Feed the Mass. Kelcy Adamec, a first-timer, stumbled across the school while hunting for a class she could take with her husband, David; she was learning to make tamales on the first of three classes she would attend through her class pass.

“I was looking up cooking classes in the area and I loved that it was mission-driven,” said Adamec.

A man named Neil said his son-in-law had given him a gift certificate for Christmas. “I love to cook—and one of my goals this year is to start eating healthier,” Neil said. “Taking this class is better than a cookbook!”

Even though none of the students at the tamale-making class were attending on a scholarship, by paying full price for the class they were helping to fund the scholarship program.

Feed the Mass has had three different homes since it was founded in 2016, but it recently found what Valentine hopes will be a permanent location at the Faubion School in Northeast Portland. The K-8 charter school has partnered with Concordia University on a holistic, nutrition- and health-focused education initiative called 3-to-PhD. The school is also home to a Kaiser Permanente wellness center, a food pantry, and a Basics Market, a new affordable grocery store chain founded by former Pacific Foods CEO Chuck Eggert.

Starting in April, Valentine and his staff will also teach after-school cooking classes to Faubion students. In a recent survey taken at the Title 1 school, 60 percent of the students identified themselves as the primary cooks in their families.

Free and affordable cooking classes are rare across the nation, but the number of them appears to be growing—at least on the West Coast. In Portland, the Oregon Food Bank hosts Cooking Matters, a free six-week class that teaches beginning home cooks how to make healthy meals on a budget. 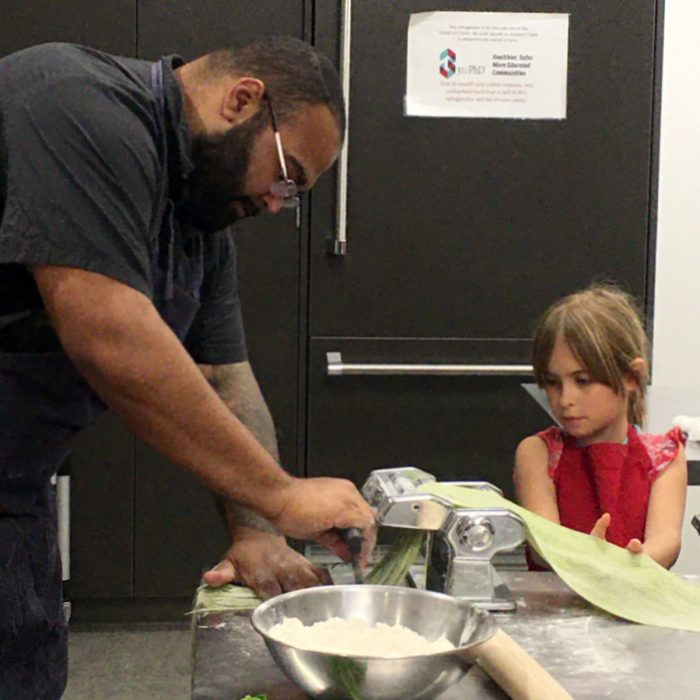 Basics Market, which now has two, and soon will have three locations in Oregon, offers 20 to 30 free cooking classes per week. Nonetheless, founder Eggert says there’s still a real need for more culinary education in this country.

“Most people my age, grew up going to home ec. People cooked!” Not so anymore, he says. Eggert collects old home ec. text books from the 1920s and says they’re full of advice about things like keeping the water you cook potatoes in and eating carrots with the peels intact as a way to get the most vitamins. “It’s those kinds of thing, as a society, we’ve gotten away from teaching to kids,” he said.

Joanne Lyford, who is the SNAP-Ed program manager in Portland, is confident that programs like Food Hero and Feed the Mass can help contribute to lifelong healthy habits, reducing and preventing obesity. “There is evidence that shows when children are exposed to fruits and vegetables, over time that will increase the likelihood that they will choose those foods over sugary beverages and foods with lots of added sugar,” Lyford said.

Valentine, who learned to cook from his mother and grandmother, is passionate about passing what he knows on to the next generation. He also teaches cooking at an alternative school where he’s advising nine high-schoolers on how to start a pop-up restaurant.

Feed the Mass does offer some less health-focused classes, like the ones that teach students how to make gingerbread and baked doughnuts, but Valentine tends to subscribe to Michael Pollan’s 39th “Food Rule”: You can eat all the junk food you want as long as you cook it yourself.

And as he and his class sit down and feast on their homemade tamales, dumplings, and tikka masala, his students inevitably end up talking to one another, creating connections around food.

“We give people the opportunity to become part of our community, whether they’re wealthy or poor,” Valentine said. “Everybody has to eat.”

Photos courtesy of Feed the Mass.