Long-Awaited Bill Could Stabilize the Farm Labor Market. Some Groups Have Big Concerns.

The Farm Workforce Modernization Act aims to provide legal status to more than a million undocumented farmworkers, but some say the bill heavily favors growers over workers. 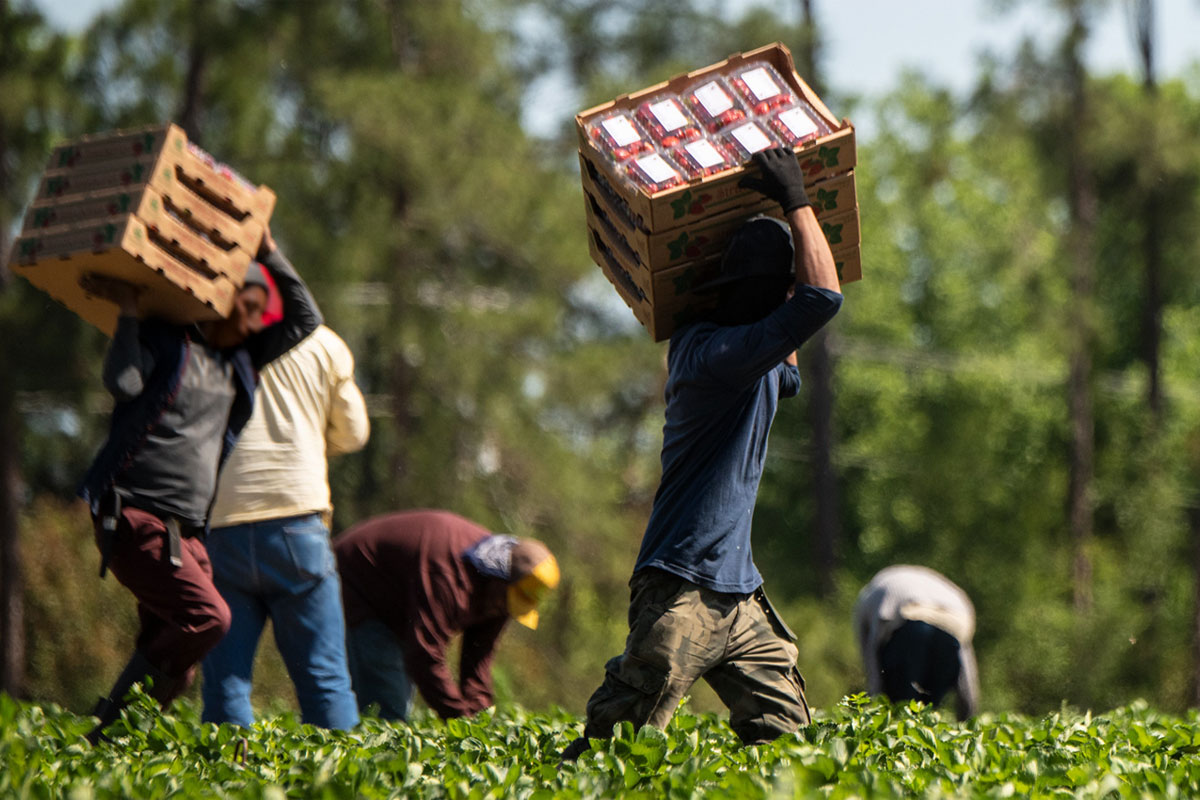 Silvia Garcia Sanchez, a farmworker from Fresno, California, says working in the fields has always come with some risk of harassment and deportation. But in recent years, as the Trump administration cast a much-wider net for deportations, that risk has gotten to be more than many people can bear.

In December, she took time off from harvesting oranges and mandarins and travelled with the United Farm Workers union (UFW) to Washington, D.C., to lobby for the Farm Workforce Modernization Act (FWMA), a new bill that aims to stabilize the agricultural labor force and provide legal status to more than a million undocumented farmworkers.

“People want to work without fear, they don’t want to be afraid every morning to leave their homes. They want to return every night to their families,” said Garcia Sanchez.

“We have hope that [the bill is] serious and it’s going to pass,” she said. “We can finally get the [legalization] process started. We have waited for such a long time.”

The FWMA was passed by the U.S. House of Representatives in December and has now been referred to the Senate’s Judiciary Committee. The legislation is a compromise negotiated by lawmakers, farmer associations, and farmworker advocates, including the UFW and Farmworker Justice.

And while comprehensive immigration reform bills have floundered in Congress for years due to Republican opposition, this narrower farmworker-focused bill was introduced with bipartisan support. Republican backers include co-sponsor Rep. Devin Nunes, a prominent politician in the San Joaquin Valley, California’s agricultural region.

The legislation is badly needed at a time when the viability of America’s farms is being tested by labor shortages and the ongoing trade disputes with China, said Chuck Conner, president and CEO of the National Council of Farmer Cooperatives. The bill, he added, ensures that farmers have an adequate supply of workers and strengthens the H-2A guest worker program to provide a stable flow of workers from outside the U.S.

“The agricultural industry is willing and ready to move in any vehicle available to us, whether it be comprehensive or narrow,” Connor said. “The labor situation is so dire within agriculture, we do not have the luxury of waiting for the ‘ideal’ process.”

But some farmworkers say the bill heavily favors agricultural growers by requiring the expansion of the already-flawed H-2A program, making the use of E-Verify—a system that allows employers to check workers’ immigration status online—mandatory across the industry and setting up a lengthy and expensive process toward citizenship.

“We need legalization, but we do not want to sell out our principles,” said Ramon Torres, president of Familias Unidas por la Justicia (FUJ), a Washington state farmworker union that opposes the bill. “We believe that we deserve amnesty without having it attached to the ability of an employer to say if we deserve it. We have worked the land for generations, and we don’t want to wait another 5 or 10 years to get permission to stay.”

‘People Want To Work Without Fear’

In 1986, Congress passed a comprehensive legalization scheme that included a special provision for those working in agriculture. From that point on, many newly legalized farmworkers left the fields once they obtained legal status, and went on to year-round, better-paid jobs. Growers again turned to hiring farmworkers who lacked work authorization, and a wide-open border insured labor was plentiful for several decades. 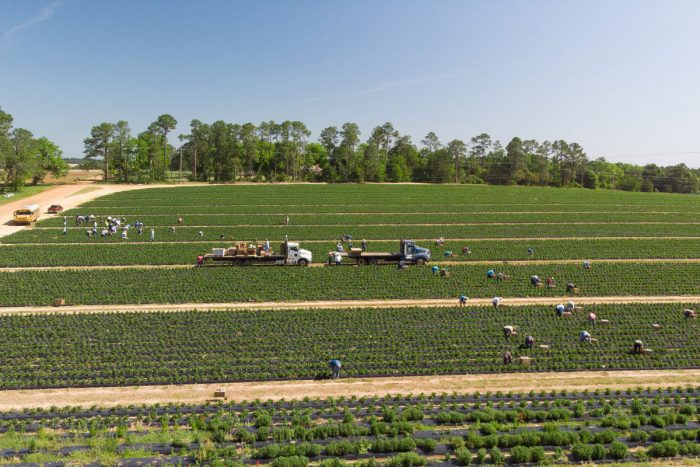 Today, about 2.5 million farmworkers toil on American farms. Most are Latinx and about half (49 percent) lack legal work authorization and residency status. In recent years, as farmworkers have aged and the federal government boosted border security and immigration enforcement, growers have faced a shortage of workers. They’ve had to increase wages, switch crops, invest in mechanization, and even leave some harvests unpicked, making labor costs soar and the search for a solution all the more pressing.

The Farm Workforce Modernization Act builds on previous failed legislation that focused on legalizing agricultural workers, including the AGJobs act and several iterations of the so-called Blue Card bill. Like these proposed bills, the FWMA aims to reform the guest worker program, but it goes a lot further than the previous attempts.

For starters, it would make the road to citizenship for undocumented farmworkers in the U.S. more arduous. Workers would have to prove they had worked in agriculture here for at least 180 days over the past two years to qualify for temporary residency and employment authorization. Those who were injured for long periods of time would not qualify.

Workers not eligible for the temporary work authorization could apply for a temporary H-2A visa if they found an employer to sponsor them. The legislation would also make 40,000 new green cards available annually for agricultural workers, including both year-round workers and H-2A visa holders. Employers would have to petition for their guest workers, and they wouldn’t be limited by a waiting period.

Some would need to wait a lot longer than in previously proposed legislation to earn a green card. AgJOBS, for example, required three to five years of work in agriculture to reach permanent residency. And the Special Agricultural Workers (SAW) program, which legalized farmworkers in 1986, required applicants to prove they had worked in agriculture for at least 90 days in the previous 12 months.

Under the currently proposed bill, farmworkers with more than 10 years of field work experience prior to the bill’s enactment would have to work in agriculture at least 100 days per year for four consecutive years. For those with fewer than 10 years of experience, the requirement would be eight years. At least a quarter of all farmworkers would face the longer wait period; three quarters of farmworkers have worked in the U.S. for at least 10 years, according to a U.S. Department of Labor survey.

Some farmworkers and the advocates they work with say the legislation would harm local workers and create a troubled future labor force by expanding the H-2A program. The program currently brings foreign guest workers on temporary work visas to fill seasonal ag jobs and is predicated on employers demonstrating a shortage of U.S. workers. Over the past decade, the H-2A program has swelled by more than 200 percent, from about 82,000 certified workers nationwide in 2008 to nearly 258,000 certified in 2019.

The new legislation would make some H-2A visas available for year-round jobs and would grant guest workers three-year visas. The bill would also dampen guest worker wages (most likely bringing down wages for all farmworkers) because it would suspend for one year the increase in the Adverse Effect Wage Rate, or the federal minimum wage for H-2A workers, and change how it’s calculated. The rate is meant to protect the wages of local workers, though growers say it’s inflated and produced using flawed survey data.

Last but not least, the program would give growers access to federal subsidies for building and running guest worker housing, which they are required to provide free of charge to H-2A workers. This would be a win for growers, especially in California where a bill was recently passed to do the opposite: prevent growers from using state farmworker housing funds for guest worker dormitories.

Such changes would make H-2A visas substantially less expensive and easier for growers to use, leading to an ever-increasing reliance on a program that advocates say is already rife with serious worker abuses and mistreatment. Many farmworker advocates point to the grim similarities with the bracero program, which brought millions of Mexican guest workers to toil in American fields during World War II and was halted two decades later due to worker mistreatment and described as “legalized slavery” by one officer at the Department of Labor, which oversaw it.

In fact, this shift already appears to have begun. In 2018, for example, the Department of Labor filed suit against Sakuma Brothers Farms, a Washington state berry farm, for giving preferential treatment to guest workers and discriminating against U.S. workers—including illegally rejecting qualified U.S. applicants for the jobs they gave to H-2A workers.

These changes would also have an impact on farmworker organizing, said Franks, because employers could choose to replace locals who are involved in union activities or otherwise deemed “problematic.”

“This could be seen as a retaliatory measure so workers don’t unionize,” he said. “Workers would have to put up with a lot more because they’re desperate to stay employed and get legal status.”

The shift from seasonal to year-round employment would be especially felt in the dairy industry, which pushed heavily for the year-round provision, Franks said. Dairy jobs are often year-round and well-paid, he said, and there is no shortage of local workers ready to take them on. Not coincidentally, Franks added, recent organizing efforts in New York state were led by dairy workers.

“This bill is punitive, it’s not fair, and it wasn’t written to benefit workers,” Franks said. “It comes from growers and the industry side and it’s using the political climate to move forward. Our farmworkers deserve better.”

Franks said Congress should pass comprehensive immigration reform that grants legal status to all undocumented immigrants. Such reform, he said, could be a lot more beneficial to those working in agriculture than the current proposal.

Whether or not the farm lobby would want the kind of comprehensive immigration reform Franks is pushing for is a big question. But either way, it’s clear that it’s not a short-term solution.

“The farm labor crisis is real and crippling, and the demand to provide a workable legislative solution is immediate and critical,” Tom Nassif, Western Growers president and CEO, said in a December statement that applauded the house for passing the bill.

Worker advocates who support the FWMA say it’s not perfect, but has some novel provisions that would benefit both local and guest workers.

For example, farmworker groups have long criticized the fact that guest workers can’t quit and find another job—rather, they are beholden to a single employer for their visas, transportation, housing, and employment. Advocates say concerns and abuse may be silenced because workers don’t want to be fired or blacklisted, which essentially ends their chances of working in the United States. 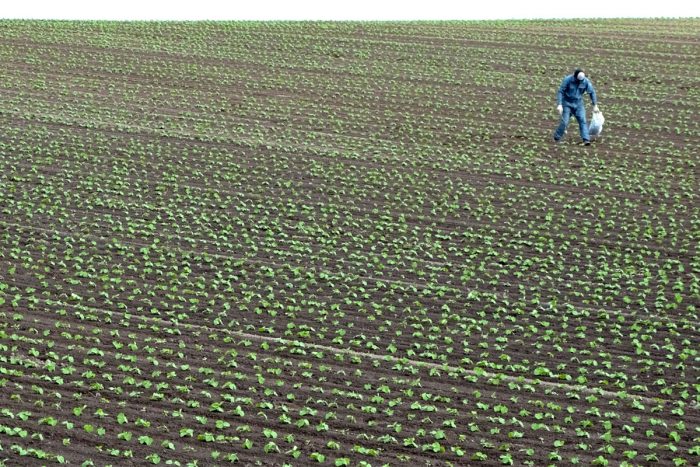 Under the new bill, up to 10,000 workers at a time would be able to hold a portable H-2A status, meaning they would be able to perform temporary or seasonal agricultural labor for any U.S. employer registered in the program. Both workers and employers could terminate the employment at any time, and workers would have 60 days to secure new employment before having to leave the U.S.

Leydy Rangel with the UFW Foundation, the nonprofit arm of the union that was also involved in the bill’s negotiations, says this win for workers is “part of the compromise made with growers, since we know H-2A workers are prone to abuse.”

In an effort to prevent fraud and abuse, the bill also would require foreign labor contractors to register with the government, creating a publicly available national registry. Year-round workers would be eligible for an annual trip home—with round-trip travel to their home countries paid for by the employers.

And all H–2A workers would be protected under the Migrant and Seasonal Agricultural Worker Protection Act, a federal law that allows farmworkers to file federal lawsuits to enforce their rights, and from which they were previously excluded.

For all these reasons, the FWMA has more than average support from both sides of the aisle, and for that reason it could have a better chance of advancing in the Senate than other similar bills have in recent years.

“This isn’t the legislation we would have written,” said Rangel with the UFW Foundation, “but it’s one we support.”

This article was updated to correct that the Migrant and Seasonal Agricultural Worker Protection Act is a federal law, not an OSHA regulation.