Claire Neaton and Emma Privat are supporting their community by protecting a way of life and Alaskan salmon.

The remote Aleutian Islands are a group of 14 large volcanic islands and 55 smaller islands, mostly belonging to the state of Alaska, known for challenging weather and strong winds. But that has never stopped sisters Claire Neaton (pictured at right, above) and Emma Privat (at left), 29 and 28 respectively, from fishing for halibut and salmon in the archipelago’s waters.

Neaton and Privat are commercial fishermen who grew up on an off-the-grid homestead in this remote region. In 2012, the pair founded Salmon Sisters, a seafood and apparel company that is gaining national recognition and helping feed hungry Alaskans via the Give Fish Project. (Like many female fish harvesters, they choose the term fishermen to describe themselves.)

The sisters fish for salmon, cod, and halibut alongside their family members, including their father who still fishes during the summer months. Currently, the family has four boats with crews of up to five people.

Alaska produces more wild seafood than all the other states combined—and its strict conservation practices and pristine marine waters set it apart on the global market, according to a 2017 report by the Alaska Seafood Marketing Institute. The state has written sustainable fishing practices into its constitution, and many entities—fishermen, scientists, conservationists, and government organizations—collaborate to make sure fish are caught by methods that maintain fish stocks and minimize harm to the plants and animals in the marine environment.

The sisters fully support and abide by the state’s strict conservation standards. While Neaton and Privat do not catch all five species of salmon found in Alaska, they are keenly aware of salmon’s cultural, environmental, and economic importance to the state, and they run their operation in ways that support independent fishermen and protect salmon as a resource. “People in coastal communities depend on the ocean for their livelihood, and their identities are very much tied to the sea,” Privat says. “Community life is centered around and inspired by the water and the life it provides.”

The apparel side of the company allows the sisters to continue to fish while also celebrating their industry and the lifestyle in Alaska. Salmon Sisters and its all-women team sells durable boots, hats, pants, and sweatshirts that depict the Alaskan way of life with nautical-themed prints that include fish, octopuses, mermaids, and waves. Their brand also partners with other fishing gear and sustainable goods companies like XtraTuf, Skida, and Rep Your Water, which provide gear for outdoorsmen while also increasing support for local conservation.

The sisters source their goods thoughtfully, from manufacturers that value fair labor practices, local production, and a commitment to recycled and organic materials, as well as sustainably sourced ingredients.

“We strive to tell the story behind wild Alaska seafood through quality products and design, and to strengthen ocean stewardship amongst our community,” the sisters say on their website.

Called Back to Alaska

Neaton and Privat grew up on a homestead near the water, and their family made its living from the sea harvesting fish. “We were given the opportunity to work on our family’s commercial fishing boat when we were teenagers, and from that experience learned about trust and the simplicity of life on the water and the honest work of a fisherman,” says Privat. 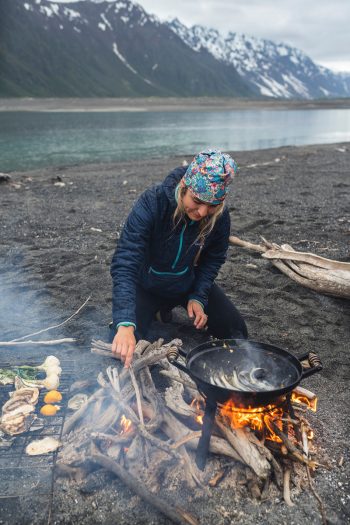 She describes their childhood as “unique, wonderful, and often difficult.” With a laundry list of chores, the sisters acquired a strong appreciation for working with their bodies and hands and in the company of their family.

“There was a lot of work to do to keep the homestead running,” Privat says, “like collecting and chopping driftwood for firewood and tending our garden and greenhouse, putting up salmon that we caught in our net, keeping our waterwheel and hydroelectric power running, making all of our food from scratch, picking berries, catching fish, and mending fishing nets.”

Both sisters left the homestead and Alaska to attend college. Neaton studied business and nutrition at the University of Vermont, and Privat studied English and art at Williams College and later received a Master’s degree in design from the University of Washington. She spent some time in Italy during school, where she learned to screenprint and began to create the products that would later become the foundation of the Salmon Sisters company.

After school, both sisters felt called back to Alaska. For them, and for many people in Alaskan coastal communities, the commercial fishing industry and ocean are less a livelihood and more a lifeline, passion, and calling.

Fishing, and the Land Hustle

Now, two of the family’s large, 58-foot boats fish for cod in the winter and salmon in the summer; the third 58-foot boat can be rigged to catch salmon or halibut. The other boat, a smaller 32-foot vessel, they use to harvest Copper River salmon including Sockeye, Coho, and Chinook.

Lately, the family is fishing mostly for Pink and Sockeye salmon in part of the Area M fishery, more formally known as the Alaska Peninsula and Aleutian Islands Management Area. To fish these species, they use a purse seine net and a skiff, setting the net between the boat and the skiff in a straight line, and over about 20 minutes, driving the two vessels towards each other, encircling the fish that swim into the net. They then draw the bottom of the net closed like a drawstring purse and lift the fish aboard the boat. Fishing in this manner requires trust, teamwork, and excellent communication amongst the crew. 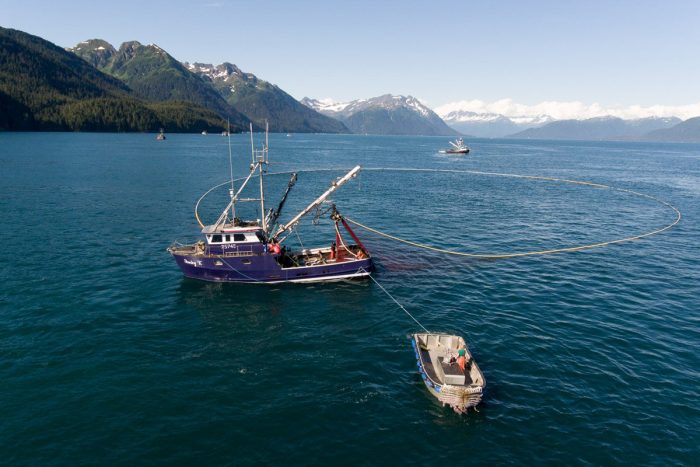 One of the Salmon Sisters’ ships at sea.

After harvesting their catch, Neaton and Privat sell and deliver their fish to seafood buyers with processing facilities in Alaska in towns near where they fish. The fish are taken to the processing facilities where they are cleaned and filleted, canned, steamed, or left whole; then they are typically shipped frozen to domestic and international markets. All the fish sold through the Salmon Sisters website is caught by the fleet belonging to the sisters’ family.

When the Salmon Sisters aren’t fishing, developing creative ideas for new outdoor gear, or thinking of ways to contribute to their community, they are embarking on what they call the land-hustle.

“There is a tremendous amount of work to be done onshore as a fisherman in the offseason,” Privat says. “There’s always boat and gear work to accomplish, maintenance and improvements. Boats are pulled out of the water, scrubbed, welded, painted. New technology is installed; old engines are replaced. Boat projects are nonstop.”

In 2017, the sisters opened their first brick-and-mortar store carrying clothing and seafood products in a shipping container in Homer, Alaska, and they began taking their seafood around the state in a mobile pop-up shop. They have since opened larger brick-and-mortar stores in Homer and Seward, and the shipping container shop has moved to Juneau.

In the shops, they carry a variety of seafood, all frozen, tinned, or smoked. Customers can also order Salmon Sisters frozen seafood through the stores and have it sent to their homes.

Shortly after founding Salmon Sisters, the sisters created the Give Fish Project to give back to their community. The project sets aside 1 percent of their sales of Salmon Sisters products to purchase wild Alaska seafood, which they donate to the Food Bank of Alaska. 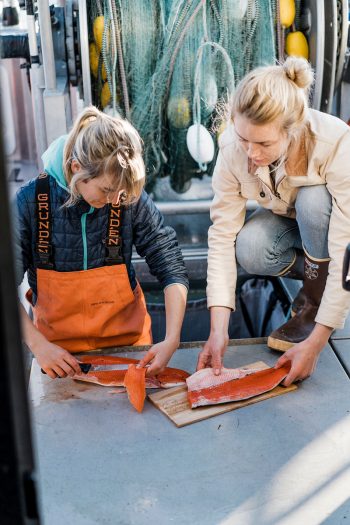 According to Feeding America, close to one in seven people—and one in five children—face hunger in Alaska. And only one in 10 Americans eat the recommended two servings of seafood each week, according to the Seafood Nutrition Partnership, a nonprofit whose mission is to inspire people to eat more seafood through outreach and awareness-raising.

Since the inception of the Give Fish Project, the Salmon Sisters have donated more than 100,000 cans of wild salmon to their Alaskan neighbors in need. Seafood provides healthy omega-3s and numerous micro- and macro-nutrients not found in other proteins. Additionally, it plays an important role in Alaska’s heritage and culture.

“When the salmon run is low, it is hard for people to stock their freezers with traditional foods,” says Cara Durr, the public engagement director for Food Bank of Alaska. “It’s important for their diets and tradition to have access to that food.” Donations from Salmon Sisters and their Give Fish Project are an important piece of that, she says.

As the climate and ocean change, as human development introduces new threats to the ocean’s health, as markets and the political landscapes fluctuate, Neaton and Privat emphasize that fishermen must speak up for their way of life and to keep their livelihood strong for the future.

“History has shown the effects of short-sightedness all over the world when it comes to a future for commercial fishermen and ocean health,” Privat says. “There has been an overall decline of fish stocks and healthy habitat due to human development, unregulated fishing, and policy that doesn’t take long-term sustainability into account.”

Amidst this, Alaska’s fisheries meet the Responsible Fisheries Code of Conduct set forth by the United Nations—the most comprehensive and respected fisheries management guideline in the world—as well as the Marine Stewardship Council and Fisheries Management Certifications. The management methods the state employs include stock assessments, regulated quota systems, habitat protection, and strict enforcement to ensure escapement goals are met. “Fishermen don’t get to fish until enough salmon have been counted by Alaska Fish and Game and made their way back to their home streams to spawn,” Privat explains. 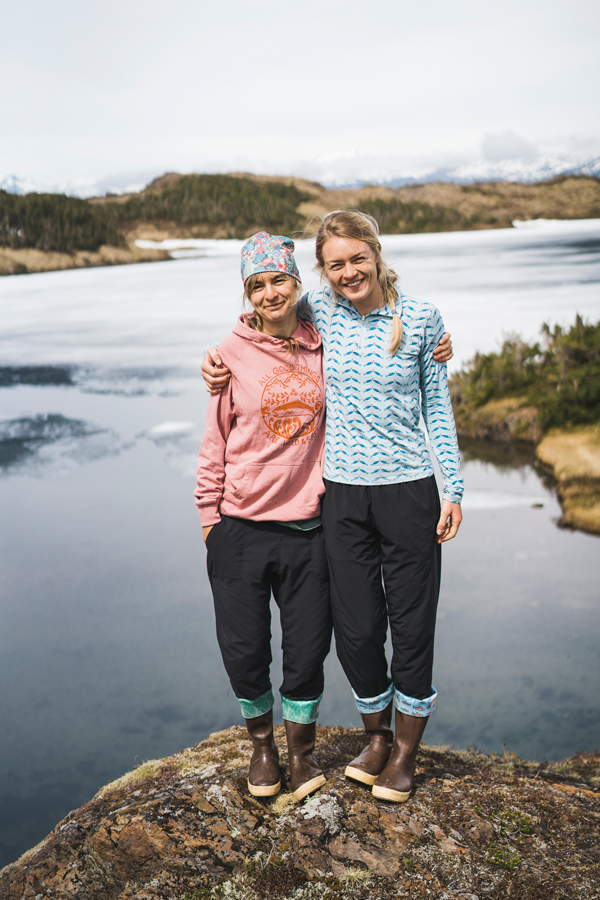 “We can act as stewards of the resources we depend on in many ways through advocacy, involvement in fisheries management and regulations, marketing efforts, community organizations, and education,” Neaton adds.

Privat encourages people who want to support fishermen in Alaska and elsewhere, to “eat wild Alaska seafood at home; share it with friends and family. Visit Alaska and see where your fish comes from, understand its coastal culture, talk to fishermen and hear about what their work is like harvesting seafood.”

She also advises people to “stay tuned in to issues that could affect the environment and fisherman’s way of life and act—the Pebble Mine in Bristol Bay is a good example.” Pebble Mine in Bristol Bay is a concern for many Alaska natives. If built, the pit mine for copper, gold, and molybdenum would be one of the largest mines in the world. Because of its size and location, it runs a very high risk of polluting Bristol Bay, which is in the heart of salmon country and which supports a $1.5 billion commercial and sport fishery, according to the Save Bristol Bay website.

“We are salmon people,” said Alannah Hurley, executive director of the Tribes of Bristol Bay, in a recent testimony. “But salmon are more than food for us. Salmon are central to our cultural identity, our spirituality, and our sacred way of life that has made us who we are for thousands of years in the Bristol Bay region.”

Through Salmon Sisters, Neaton and Privat are trying to get wild Alaska seafood, caught in a way that honors the environment and culture of Alaska, into more people’s hands. “Supporting our business,” Neaton says, “is also supporting the health of our community and our fishing fleet.”