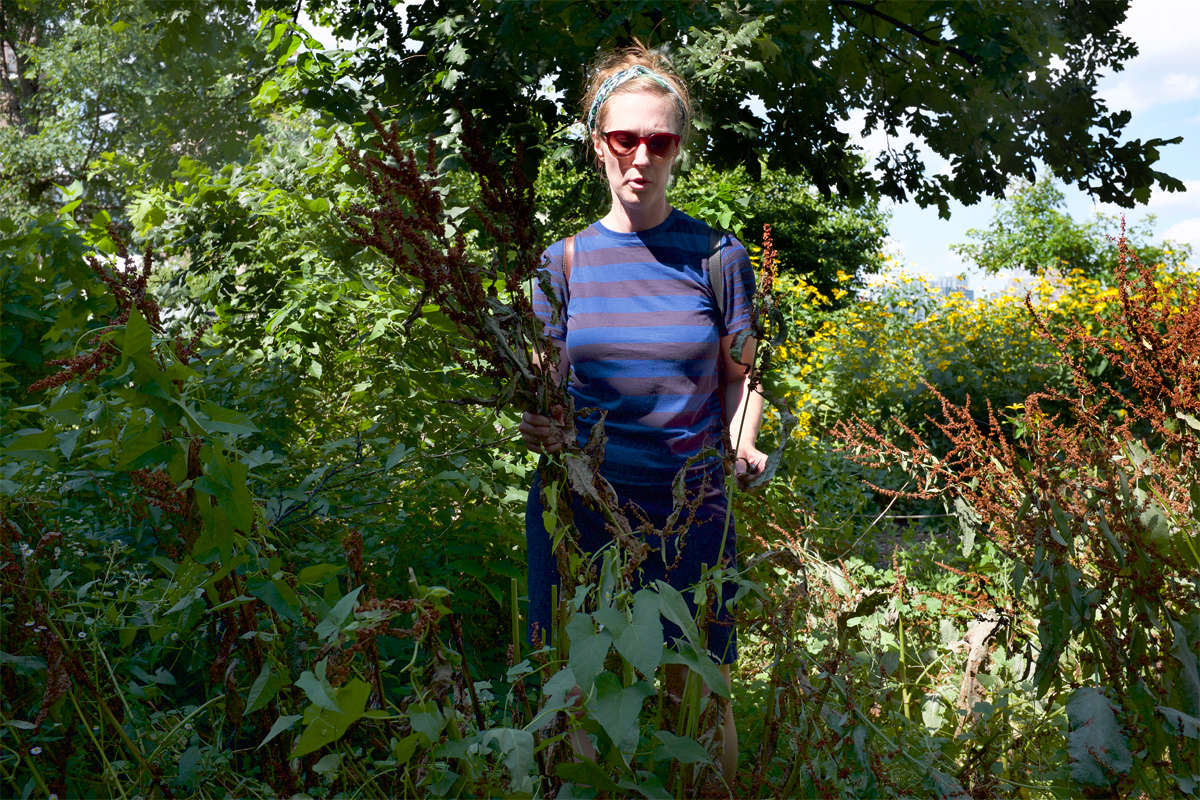 On an October morning in a small kitchen at the back of Swale House on New York City’s Governors Island, Candace Thompson scrambled to feed dozens of people gathering in the gallery, its floors slick from a relentless rainstorm outside. Responses for her “dirty brunch” had topped 115 people, an unexpectedly high degree of interest in the mostly foraged meal that included knotweed, shore crabs, and Chicken of the Woods mushrooms.

“[I’m] trying to exercise abundance thinking and accept the potential chaos of it,” Thompson wrote in a text the day before. “I don’t want to be responsible for an incident of mass hangriness.” 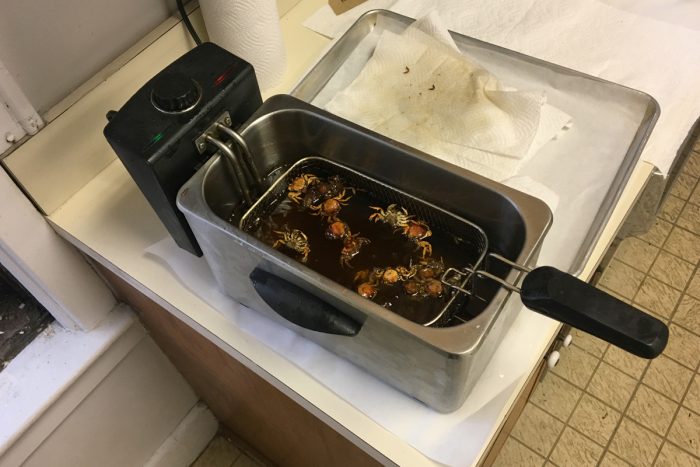 The bad weather may have been a stroke of good luck; only about 40 people—a mixed group of urban farmers, foodies, herbalists, artists, and ecological scientists—braved the sideways rain to make the ferry trip for The Collaborative Urban Resilience Banquet’s (CURB) final gathering of 2019. The banquets, coordinated and executed by Thompson, are part of a multimedia exploration of the edible, sometimes contaminated, and often overlooked natural world in urban environments.

Not all the food comes straight from the streets. At the previous public CURB meal in August, for instance, the main course was pigeon. Sourced from Graham Live Poultry in Bushwick, the squabs were marinated in a spice recipe provided by a friend’s mother via video chat from Egypt, then grilled up for passersby at a Brooklyn block party. This time, the ubiquitous bird’s eggs had been on the menu, but since the pigeons were molting and unable to produce in time, Thompson settled for quail eggs instead. It seemed likely that the mugwort they were prepared with had turned them a shade of aquamarine, leading to their listing on the menu as ‘Green eggs and fam.’

“I should probably, like, consult a chemist,” she quipped about the unexpected result while caroming about the kitchen with the volunteer food-prep team. But none of the guests seemed to mind, judging from the lack of leftovers. 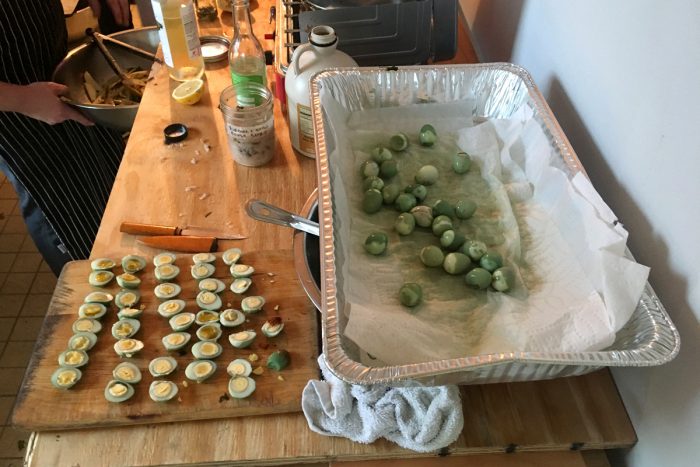 Launched in October 2018 as the thesis project for Thompson’s graduate studies in Integrated Media Art at Hunter College, The CURB centers around an active Instagram feed featuring videos of urban foraging runs, readings from progressive ecological literature, and interviews with soil scientists and other experts, all attended by various sub-projects like the periodically updated “herban dictionary.” Seasonal IRL gatherings like the one at Swale House are meant to bring city dwellers into contact with the edible natural world that surrounds them.

October’s brunch included palm-sized pancakes made with yellow dock gathered in Stuyvesant Cove Park on the Lower East Side—cut with flour for added volume—with fried mushrooms gathered upstate; Gingko berries, picked from along Johnson Avenue in Brooklyn, garnishing curried kousa dogwood fruits taken from Green Wood Cemetery; Asian shore crabs plucked from a rocky shoreline of Long Island and laid upon little beds of lamb’s quarter foraged from outside of Roberta’s pizzeria in Bushwick; and three varieties of crepe rolls made from the same yellow dock as the pancakes, rolled with jams made of persimmon from Green Wood Cemetery, june berries from the Gowanus Canal, and autumn olives from Donald J. Trump State Park.

The latter location undoubtedly wrinkled some noses, but seeing “Gowanus Canal” (a Superfund site) listed on a menu is enough to make any New Yorker concerned about the safety of what they’re about to eat. Participants at the evening’s meal had been warned that, although nearly everything on the menu was tested within E.U. standards for arsenic, cadmium, and lead (“clean enough,” as Thompson describes it), they were willingly participating in a gustatory experiment. Thompson, who says she has regularly served food to large groups for over 15 years, counts on the fact that she is serving the food free of charge as a way of sidestepping the difficulties of strict food safety standards.

“I’m not always entirely sure that standards are actually guaranteeing our safety,” she says. “People get food poisoning from Michelin star restaurants, and some of the best food I’ve ever eaten was kept for three days in a cooler and cooked on a car’s engine block. I don’t know, man. It’s all a grey area to me.”

In lieu of payment, Thompson asks for consideration and participation. In February, guests helped her cook; in May, they took part in a “remediation ritual” in the city streets; in August, they took a “schvitz” in a hot shipping container to consider the history of the global spice trade for 5 minutes before eating. On Governors Island, she was going to ask her guests to help collect acorns on the island’s Nolan Park for a future banquet, but braving the weather was deemed sufficient. Thompson believes it’s more important to get people to contemplate their food and where it grows than to be able to offer assurances that it’s completely free of contaminants.

“That’s just the fact with our global food system,” she says of PCBs, microplastics, PTFEs, PAHs and other common contaminants. “We’re consuming these things one way or another, the only difference when you come to one of my meals is that you didn’t pay for it and I’m up front about the risks. It’s then up to each person to think critically about whether they’re at a point where they want to take that risk. Is Kraft Foods that transparent? Is General Mills asking you to think about that?” 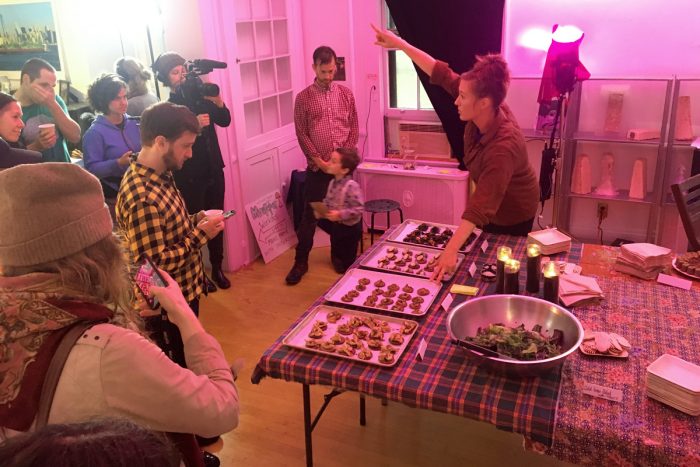 Thomspon sends samples of the foods she forages to Cornell University’s Nutrient Analysis Lab for testing. She says those tests often reveal that they are less contaminated than store-bought foods. A head of spinach she tested from the local grocery store showed higher lead levels than three wild spinach samples collected from the streets of Bushwick, for instance. She compared gingko nuts collected from Johnson Avenue, along which big rig trucks regularly thunder throughout the day, to cashews from the grocery store. The latter came back positive for lead; the former did not.

The picture of what’s safe to eat in an urban setting can be counterintuitive. Some of the cleanest dirt in New York City can be accessed by way of development projects—when ground is broken for a new building, the glacial soil dug out from underneath is sent to the Clean Soil Bank for use all over the city. Heavy metals, industrial waste, and runoff from roads count among the typical forms of city pollution. Urban foragers make a point of avoiding the “pee zone” along sidewalks where dogs mark their territory.

At one table in Swale House, visitors were offered free scans of soil they brought from home, facilitated by a representative of the Urban Soil Institute, who sat ready with a (very expensive) X-ray fluorescence gun, labeled with a radioactivity icon, looking like a prop from The Fifth Element. 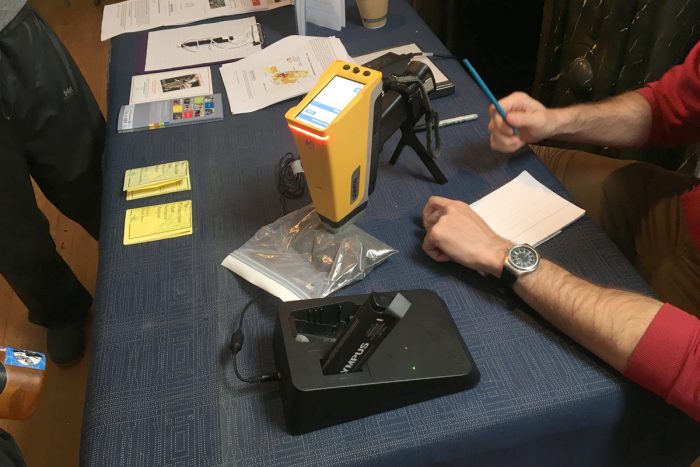 Brooklyn College has been collecting data on heavy metals in New York City soils for about 10 years, but just how risky any given plant or animal is to eat remains largely unknown.

“It really depends where it’s growing,” says Dr. Anna Paltseva, a soil scientist who works with Brooklyn College, and who participated in a panel discussion after the banquet. “What is the wind pattern, how is dust distributed from other areas, what is the original soil there, is there any industry nearby? New York City is very heterogeneous in its soil, topography, geology. Everything is so different from borough to borough, even households are different. Two neighbors may have different soil quality.”

Concerns about food safety are not mentioned in the city’s rules against foraging. The policy seems aimed at protecting public green spaces from being trammelled and picked clean, but as food law and policy scholar Baylen J. Linnekin says in an article in Fordham Urban Law Journal, “The language of the ordinance is both broad and vague enough that it does not expressly prohibit picking fruit from trees or plants.” That’s led to a lot of tension and confusion about how foraging is defined and how the laws about it are enforced.

As Linnekin details in the article, one of New York City’s most famous urban foragers, “Wildman” Steve Brill, was arrested in 1986 for picking dandelions in Central Park; the case was eventually dropped and Brill was hired to lead foraging tours as a city employee. In 2015, a man named Greg Visscher was fined for picking raspberries in a county park without a permit. That case, too, was dismissed on appeal because the city couldn’t manage to argue how picking berries actually harms a plant, or even to prove the existence of the citation Visscher was charged with violating.

For these reasons and others, Thompson isn’t too worried about the legal consequences of her foraging. “I actually look forward to the day when I get ‘busted’ by some park cop for collecting mugwort or garlic mustard,” she says. “Slap me with a fine, bro. I’ll send the city a bill for ecosystem services rendered.” She points out that the communities and cultures that have developed relationships with their “plant neighbors” also generally know not to overharvest. 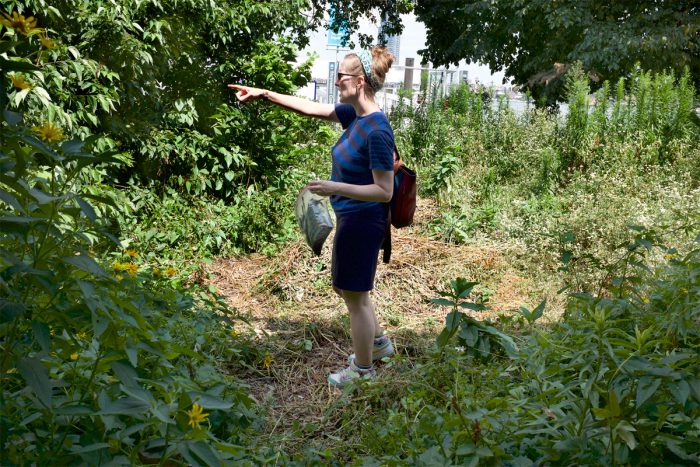 “Immigrant communities have done it forever,” she said. “I have been told that that’s actually why it is illegal —that those laws were put in place as a way to stop old-world foraging customs that immigrant communities brought here. [But] most folks who forage have an implicit understanding of their relationship with nature and, by and large, follow Robin Kimmerer’s notions of reclaiming ‘The Honorable Harvest.’ They don’t take it all; they know when and where and how to forage in ways that sustain populations.”

Part of The CURB’s mission is to point out that the plants and animals we live among, like so many of our human neighbors, are also immigrants. The Long Island shore crabs that bobbed in the deep frier like scalding apples on the morning of the banquet are thought to have arrived via the ballast of trade ships. Japanese knotweed came from Japan and is seen as invasive, a notion Thompson and others—such as Jackson Landers, author of Eating Aliens, and Tao Orion, who wrote Beyond the War on Invasive Species—aim to subvert.

Their approach leans toward eating our urban ecosystems into sustainable balance. Rather than simply removing invasive species, as has often been the response by municipalities and scientists, Thompson, Landers, and Orion all take more of a permaculture-inspired approach that honors the role every member of the ecosystem plays.

“We’re living in a radically altered, continuously altering landscape, and I’m not trying to figure out how we get back to some hazy, undefined, presumed perfect point where nature and man were in harmony,” said Thompson.

After working through several courses, the guests at The CURB’s Governor’s Island banquet gathered for a six-woman panel discussion that included soil scientists, mycologists, herbalists, urban foresters, and food justice activists. The discussion centered around how we might reconfigure our relationship to the natural world around us, from one of domination and alienation to one of partnership.

“People are calling amaranth ‘satan’s weed’ because it has grown resistant to herbicides,” said Alyssa Dennis, an artist and herbalist involved in the reappraisal of invasive species. “It was a staple grain because it produces 50,000 seeds in one pod. So, it’s like, ‘Where do we form this ecological literacy and get our hands back into it at a substance level and sort of reframe?’”

Thompson followed up. “It becomes a question of what we value, right? Pokeweed is from here, but people are like, ‘Argh, it’s in my way.’ Well, then, [next spring* you should] eat it.”

* Note: This article was updated to reflect the fact that pokeweed is poisonous without the proper preparation or unless harvested in the spring.