Home to an often-unsung network of women and non-binary leaders, the city was a backdrop for a recent dinner series that put them in the spotlight. 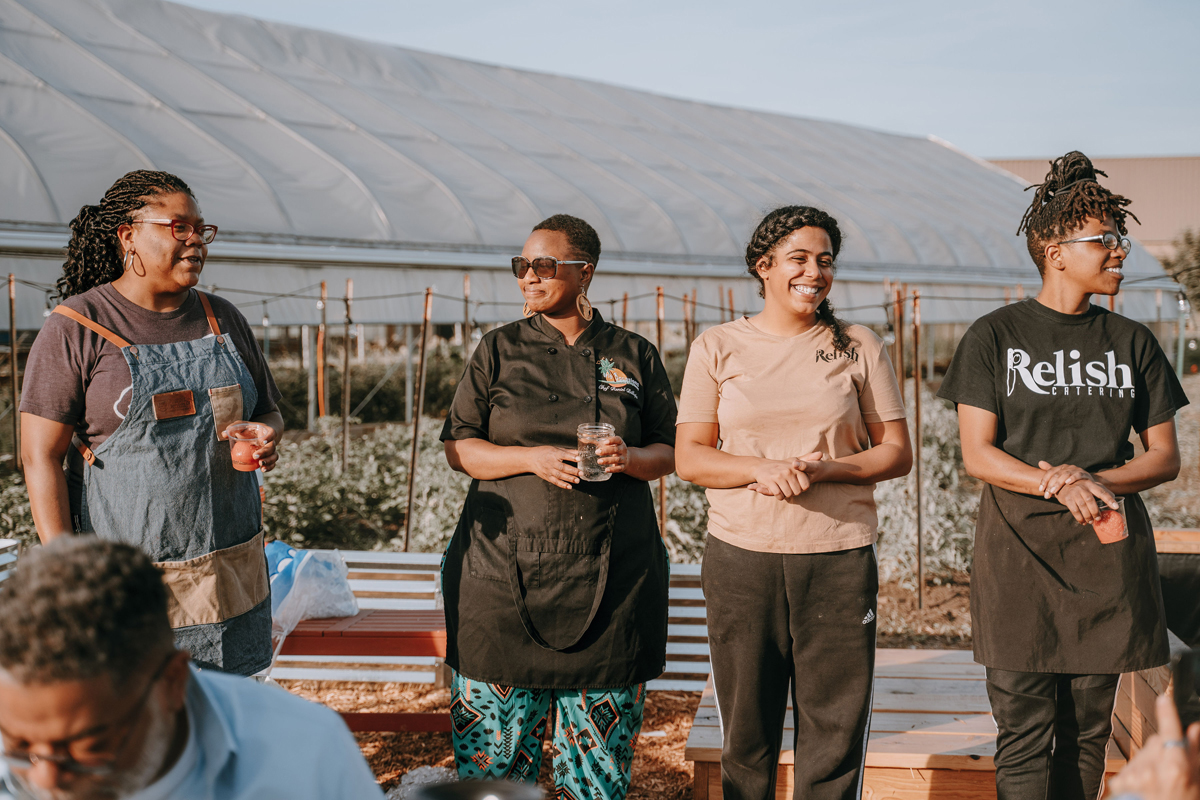 On a nearly 90-degree evening in late June, about 40 people sat at an extended table, draped with a white tablecloth and decorated with table settings, flowers, and personal mementos. They came to satisfy their appetites with a family-style, five-course dinner, held outdoors at the Keep Growing Detroit farm, a 1.5-acre farm nestled in Detroit’s Eastern Market district. That night, four women chefs and two women farmers led guests on a storytelling and culinary journey, guided by the menu theme, “The African Diaspora: The Transatlantic Slave Trade from Africa to the Caribbean to the Americas.”

The dinner marked the first in a summer-long series called Fruits of Our Labor, a showcase of the powerful role that women and non-binary chefs and farmers play in Detroit’s food system. Developed and co-hosted by women-led organizations Keep Growing Detroit, which supports gardeners and farmers in the city, and FoodLab Detroit, a nonprofit incubator for local food entrepreneurs, the series, which wrapped up in early autumn, included events themed around the practice of eating together, an ode to Detroit, and exploring shared and individual food memories. 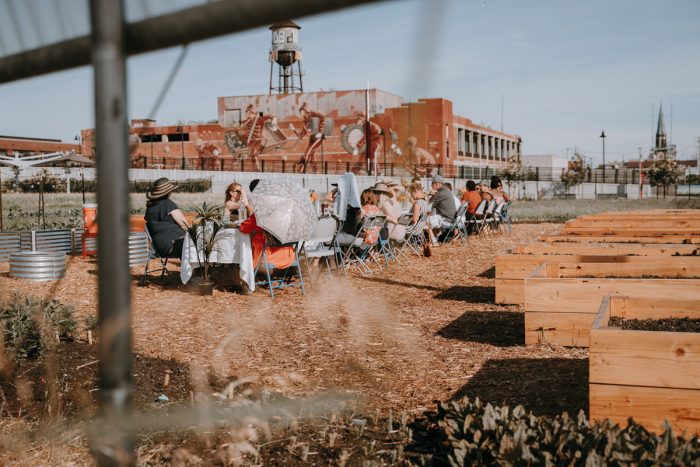 The dining arrangement for the Fruits of our Labor dinner series. Photo © Val Waller.

FoodLab Detroit and Keep Growing Detroit conceived of the Fruits of Our Labor dinners as a way to build a sacred space for the unsung heroes that are leading the city’s movement for a more equitable food system. And despite the obstacles stacked against them in the industry, women are working to create a food-sovereign city through collaboration and community-building.

“What does it look like for these women to come together as a collective unit to put forth their stories, their creativity, their culture, their tradition…and do it in a way that is also building community and not competition?” asked Devita Davison, executive director of FoodLab Detroit. 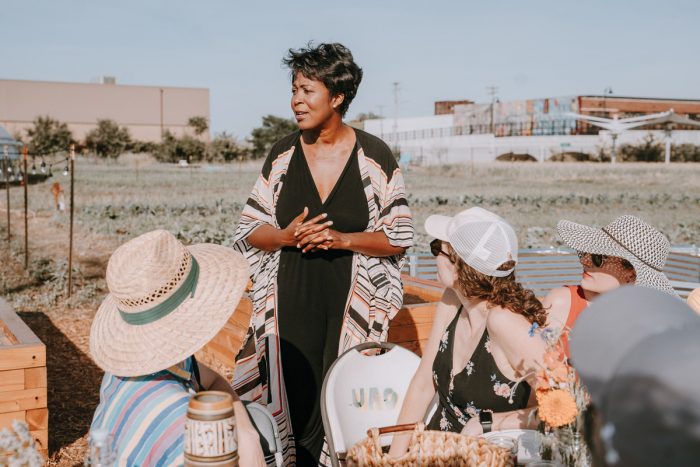 The evening’s menu followed a theme: Each dish featured ingredients that enslaved Africans brought from the motherland, which helped them to survive long, grueling days of labor. Reniel Billups, executive chef and owner of Irie Occasions Catering, started the dinner with an appetizer of journey cakes with black-eyed pea hummus, which was followed by salad of pickled beets and strawberry with watermelon vinaigrette from Le’Genevieve Squires and Brittiany Peeler, and a palate-cleanser of watermelon huckabuck from Ederique Goudia.

“Sometimes, in the culinary industry, you see competitiveness between the restaurateurs,” Davison said. “So we put all of them together and let ‘em do a dinner together, and now you get the best of both worlds. That’s collaboration. That’s community. That’s working together.” 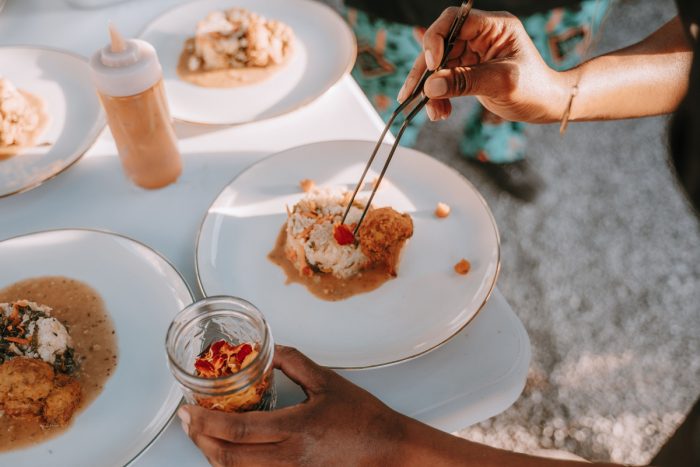 Before the guests took their first bite of a dish, chefs introduced it with a personal story relating to that dish and/or how they prepared it. Billups shared that her version of journey cakes—golden brown, elongated ovals made up of flour, cornmeal, and a bit of sugar, fried to a light crisp—was inspired by trips to her grandfather’s farm.

“Back in the day, my grandfather had a farm in the hills,” Billups said. “We lived at the bottom of the hill. It literally was a day’s journey to get to his farm. [This cake] holds up really well—it doesn’t get stale on you, so it travels with you, fills you up, so therefore it’s a journey cake.”

Throughout the meal—which also included a local-greens-filled gumbo z’herbes, battered lion’s mane mushrooms with African soul fried rice, yam purée and voodoo gravy, and a Jamaican rum cake with gooseberry jam and citrus cream—chefs and farmers shared their stories and their experiences, as camaraderie formed between the guests over dinner.

It’s well-known that women in the food industry grapple with any number of obstacles to succeeding as chefs, farmers, and entrepreneurs—including a lack of resources, hostile work environments, sexual harassment, invisibility, and competition. Women of color face all of these same obstacles, plus the compounding factors of overt, indirect, and systemic racism. 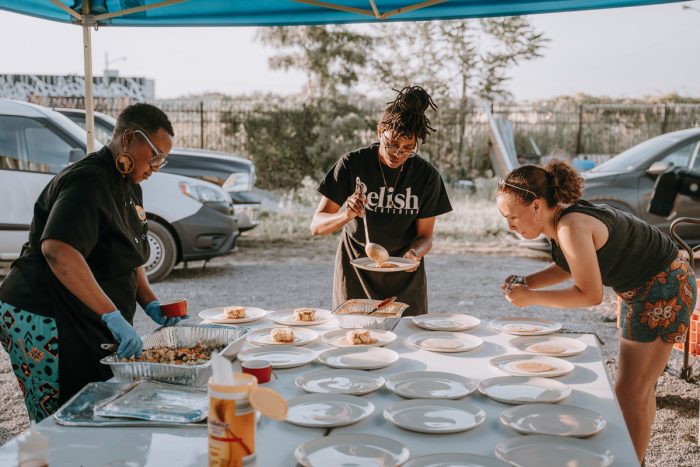 “When you start thinking about those individuals who lack power, who don’t own the land, who don’t own buildings, and who don’t have the infrastructure that’s needed to actually start and launch a food business, it’s typically Black women,” explained Davison. 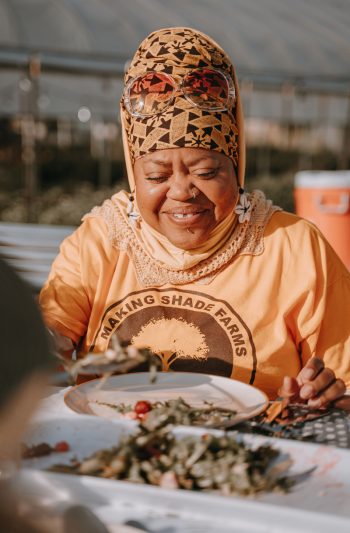 That creativity was on display at each dinner. At the third dinner, held in August, the star ingredients were garlic and in-season tomatoes, provided by farmers Diane Hoye of Ohana Gardens and Erin Cole of Nurturing Our Seeds Detroit. Using the theme, “Commensality: The Practice of Eating Together,” chefs Deveri Gifford, co-owner of Brooklyn Street Local, Kiki Louya, Rohani Foulkes, and Jessi Patuano of FOLK Detroit, Kate Williams, owner of Lady of the House, and Chef Nezaa Bandele, owner of Paradise Natural Foods, transformed the ingredients into heirloom tomato tarts with caramelized fennel and garlic bread crumbs, lasagna, and garlic tear-and-share bread.

“We’re growing a food ecosystem, and in order to grow an ecosystem we all have to work together,” said Bandele, who has been cooking globally inspired plant-based food in Detroit since the 1980s. Known as Mama Nezaa, Bandele is working to open a vegan neighborhood deli in the city.

For the dinner series, Keep Growing Detroit and FoodLab brought together women with diverse backgrounds and skills. For many of the women, it was their first time meeting and working with each other. They were divided into four teams, consisting of three to six chefs and one or two farmers. Teams also included two youth farm apprentices, who could gain exposure to the work and assist with restaurant operations.

“When we came together in the kitchen, it was just sharing information, sharing energy, sharing vibes, sharing pain,” said Bandele. “There’s no competition here. We were just like, ‘Let’s go feed them some really awesome food.’”

The dinner series highlights how women are working together to nourish and rebuild neighborhoods, and mentoring and employing one another. And they are disrupting the traditional model of the restaurant industry by changing the work culture, advocating against a discriminatory tipping system, and increasing wages. For example, earlier this year, the owners of FOLK Detroit, Louya and Foulkes, joined with executive chef Sarah Welch and Ping Ho, owner of The Royce and Marrow, to form a women-led hospitality group that puts treating employees well front and center.

“I really think that’s the key about the women that were involved in this [dinner series] is that there’s deeply held values around justice, around how we treat people, around equity, and wanting to bring that to the work that we do and in the city,” said Leah McCullough, owner of Lawn Gone Farm and one of the two farmers who worked on the second dinner in the series, held in July.

That dinner, themed “Plant-ed in this Place: Roots, Routes, and Relationships,” was an ode to Detroit. The menu included produce from McCullough and Olivia Hubert of Brother Nature Farm, and featured grilled halloumi wrapped in preserved grape leaves, fried green tomatoes and succotash, and mushroom-stuffed squash blossoms with hand-made pasta. The meal was prepared by Alison Heeres of Coriander Kitchen Farm, Bekah Galang of Avalon International Breads, Lea Addington of LIT Vegan Kitchen, and Meiko Krishok of Guerrilla Food.

Detroit has a rich history of urban agriculture, which has been systematically integrated into every community sector. It’s the backbone to the city’s food ecosystem: Today, there are 1,600 farms and gardens in the Detroit.

Ashley Atkinson, co-director of Keep Growing Detroit, says that, in a male-dominated industry, the women can use their relationships to lean on each other for business and emotional support. She also believes that when restaurateurs and cooks have relationships with farmers, it makes the city’s food industry better.

“I think that’s really only possible when the chefs not only know the farmers, but are willing to use the fruits and vegetables [when they don’t look appealing] or are about to go to the compost unless someone uses it,” Atkinson explained. “That kind of thing isn’t possible if there aren’t relationships.” 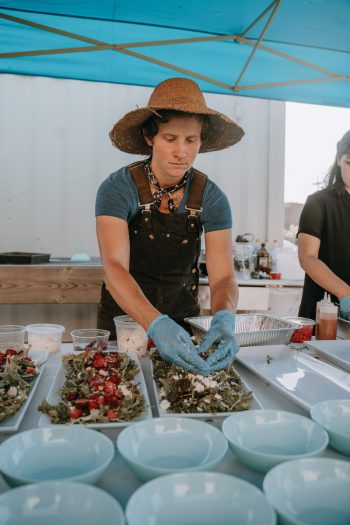 Beyond the relationships, the dinner series also gave space to recognize the nucleus of the city’s food system—the women farmers. McCullough, who grows 65 varieties of 35 different vegetables, says she liked seeing women farmers uplifted and celebrated, since farms are often associated with a man.

“I can be guilty of this as well, but when I think of the farmers around the city, I most often think of the male farmers,” she said. “Even when male and female partners are farming together, it’s often the male farmer’s name that gets associated with it.”

Erin Cole, co-owner of Nurturing Our Seeds, agrees, and says the dinner gave her a chance to be seen, absent of her husband.

“Normally, I walk in the shadows of [my husband] Magnetic Sun, and with him shining so brightly, honey, that’s a hard act to follow,” she laughed.

“It’s women that are really doing the work,” Cole added. “They don’t see us all the time and we don’t get the credit that we deserve, but I think that night gave us a chance to not only showcase our talents, but also for people to truly see us and see who we are.”

The final dinner of the series was themed “Food Memories–Back to Where We Started.” Dishes included flat bread with salata mechwiya, freek tbikha, and ma houria, red curry, and breadso ice cream with amaranth tuille, honeyed apples and rosemary were prepared by chefs Welch and Phoebe Zimmerman of Marrow, Azeezah Ford of FOLK Detroit, Harriette Brown of Sisters on a Roll, and Warda Bouguettaya, owner of Warda Patisserie. The chefs were supported by farmers Deana Wojcik from The Mushroom Factory and Emily Staugaitis from Bandhu Gardens.

Based on the response to the dinner series—from diners as much as the chefs and farmers—Davison told attendees at the final dinner that a second series was in the works for 2020. For Atkinson, continuing the series offers a chance to build on successes from this summer.

“The most amazing thing about the dinner series has been the relationships blooming between these women,” said Atkinson. “I’m really excited about seeing some of the chefs create relationships with some of the farmers that didn’t exist before.”

Brittany Hutson is a Detroit-based writer and freelance journalist who has covered small business, entrepreneurship, personal finance, real estate, higher education, and community development for publications such as Black Enterprise magazine, Essence, The Wall Street Journal, Shelterforce, and others. Her food writing covers the intersections of entrepreneurship, culture, and community, and has appeared in Tostada Magazine and Edible Brooklyn. Her writing can also be found at her personal blog, Fed & Bougie. Read more >