Pittsburgh Grows Urban Gardens in the Fight Against Gentrification

Urban ag groups and organizers are fighting food apartheid and building economic self-sufficiency and resilience in their communities. 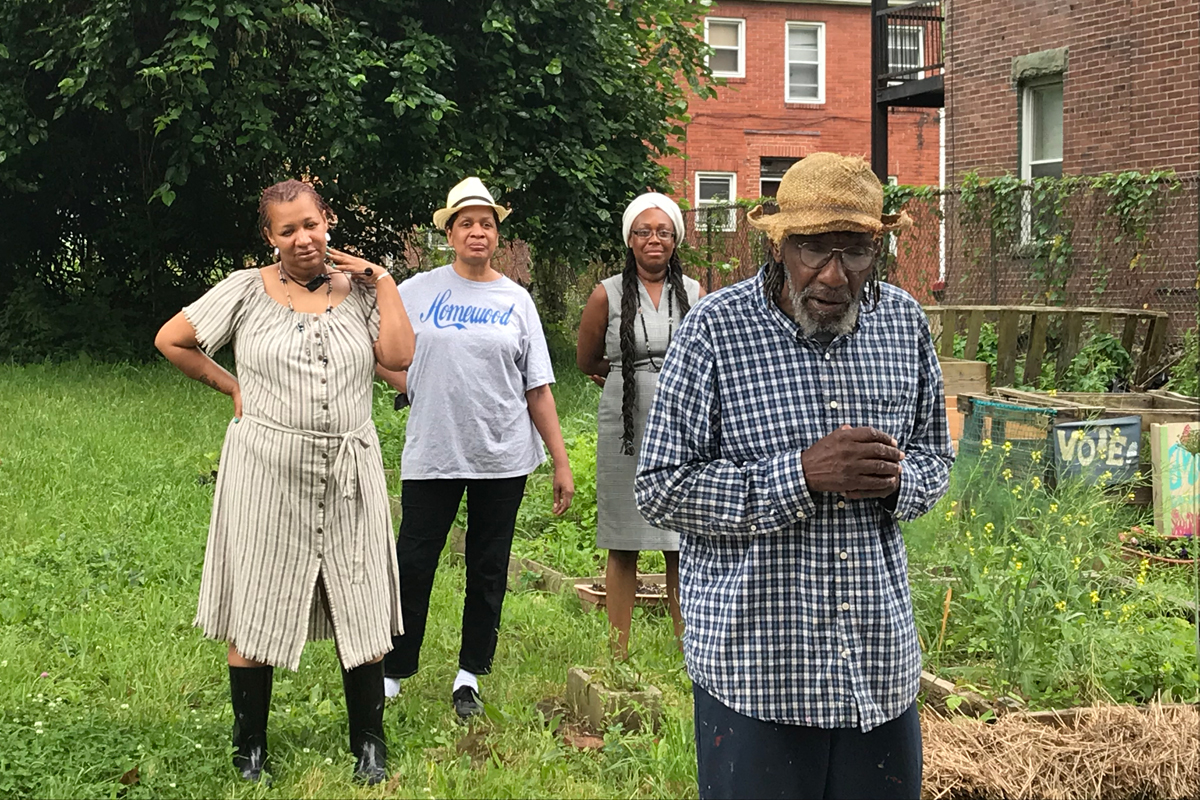 “Like most Black people my age, I’ve always been in the midst of gardens,” says 72-year-old Ayanna Jones, between running a group of students to the bus station and harvesting crops at her community garden. “My grandparents had chickens, a mule, a garden. My grandmother canned.”

Jones is the CEO and founder of Sankofa Village Community Garden, one of several Pittsburgh grassroots organizations that aim to empower their communities. Farming and social justice have been themes throughout her life. After attending Cheyney University of Pennsylvania, the first historically Black higher-education institution in the country, she moved to Washington, D.C. in 1979—living a few blocks away from Frederick Douglass’s house—and growing food was central to her community. 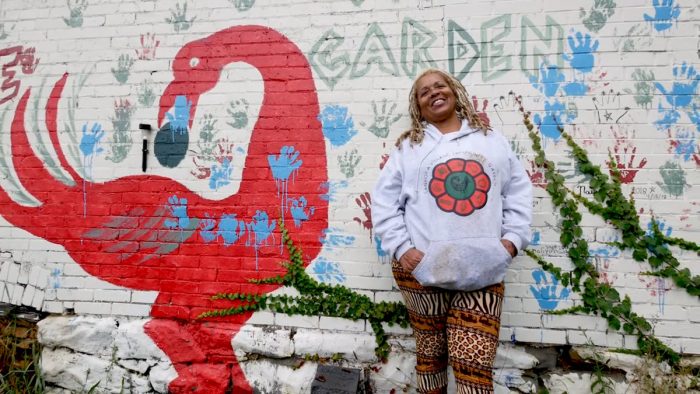 “In D.C., everyone on our row had a garden or grew something,” says Jones. “I started enlisting the kids in the community [to help garden]. I’d look up in the morning and see kids sitting in my backyard. Not one or two, but like 10.”

When Jones moved back to Pittsburgh in the late ‘90s, she brought with her the lessons she’d learned from D.C.’s vibrant Black culture. She studied to become a master gardener and founded Sankofa Village. A few short years ago, the property at the intersection of Susquehanna and North Braddock in the Homewood neighborhood of eastern Pittsburgh was just an empty lot; today, it is home to 23 beds of vegetables, shared by community volunteers and young adults who help Jones tend the tomatoes, cucumber, peppers, and basil.

A few days after the last harvest of this year’s luffa plants, the entire farm will shut down and move a half block up the street, to a new property with three lots, a children’s play area, and greenhouses for year-round production. This new location will help Sankofa Village put down deep roots in the community by providing more opportunities to teach economic skills to neighborhood youth.

For an example of how Sankofa Village works to fill in the gaps in this under-resourced neighborhood, stop by the garden in the summer. At the peak of the growing season, Jones and her students put the week’s harvest in bags on their fence for anyone to take. Although Jones doesn’t know how many pounds of food she harvests each week, she’s emphatic that “every bit of food” gets eaten. She also teaches financial skills to community youth through a regional paid summer jobs program called Learn and Earn. Last summer, nine students participated in the program.

Homewood was once home to wealthy industrialists, including brothers Andrew and Thomas M. Carnegie. In the 1960s, when the city displaced 8,000 residents and 400 businesses in the nearby Lower Hill District to make room for a hockey stadium, many of the people who were displaced settled in Homewood. As a result, the neighborhood’s demographics went from 22 percent Black in 1950 to 66 percent Black in 1960. By 2010, the neighborhood was more than 90 percent Black. 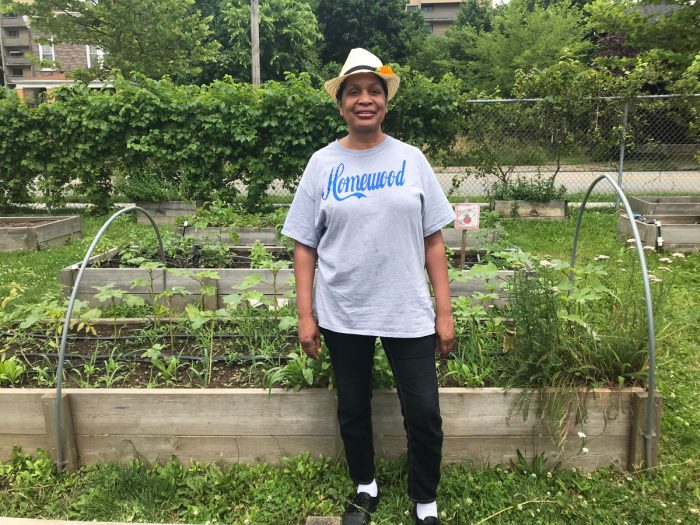 Other predominantly Black neighborhoods in Pittsburgh have recently faced development pressures that make it difficult for longtime residents to remain. For instance, three years ago in East Liberty, just a mile from Homewood, a $50 million development project forced 200 residents out of their homes to make way for a complex that will house a new Whole Foods store. The neighborhood is now home to an Ace Hotel, a Warby Parker glasses shop, a new location for the hip restaurant chain Honeygrow, and other upscale dining and shopping options that are largely out of reach for low-income folks.

But in Homewood, the lessons of the Lower Hill and East Liberty are still fresh, and Jones and many others are determined not to let their neighborhood suffer the same fate. In addition to Sankofa Village, several other grassroots organizations throughout Pittsburgh aim to empower their communities, including Black Urban Gardeners and Farmers Cooperative of Pittsburgh (BUGs), The Oasis Project, Operation Better Block, The Pittsburgh Food Trust, Grow Pittsburgh, and others, which comprise a group called The Homewood Food Access Working Group.

Community-driven efforts like these are on the rise in cities around the country that face development and gentrification pressures. And in Pittsburgh, food-access groups like Sankofa Village are working to provide the kind of community development that will ideally lead to economic development, which in turn will help current and long-time residents take more solid stakes in their neighborhood.

Improving a Community Through Food

Raqueeb Bey, the founder of BUGs, and an urban agriculturalist and advocate for the underserved in Black communities, also runs a farm in Homewood. Along with farm manager Celeste Taylor, she currently grows food on 31,000-square-feet.

Like Sankofa Village, BUGs also focuses on using their resources for economic development. Currently, they’re launching a pilot re-entry program for women coming out of the Department of Corrections. The first stage of the program, which aims to help participants build job skills and financial independence, will include five women, and Bey hopes to see it scale up over time.

Perhaps the brightest light on BUGs’ horizon is developing a food cooperative for Homewood. Bey has teamed up with several economic development organizations in Pittsburgh to secure a building and parking lot for the facility, which could radically improve residents’ access to food as well as keep money within the community. 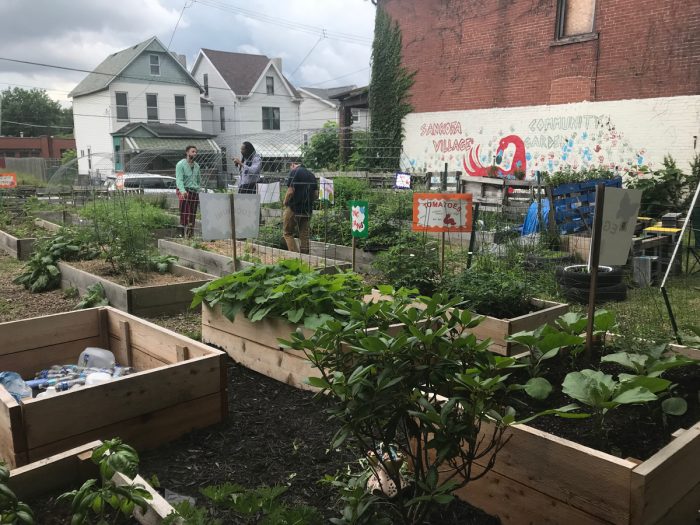 Currently, Homewood residents have few grocery options–there are a couple of Giant Eagle supermarkets within a few miles, as well as the Whole Foods and Trader Joe’s markets that have sprung up in East Liberty. Additionally, the East End Food Co-op is a short drive from Homewood in neighboring Point Breeze. However, there’s nothing within their neighborhood, and for residents without cars, getting to the market can be a challenge, especially during Pittsburgh’s long, harsh winters.

The coop isn’t just a play for better food access, but more economic opportunities for neighborhood residents. With the increase in services and amenities comes increased interest in the community, which in turns drives up housing prices and often forces renters to relocate. Some advocates are concerned that without the increased economic opportunities, the gentrification that has taken place in The Hill and East Liberty may also impact Homewood.

Tamara Dubowitz, a researcher at The RAND Corporation, a nonprofit global think tank, recently conducted a study funded by the National Institute of Health to look at what happens when a supermarket opens in a Pittsburgh neighborhood with poor food access.

“We said, ‘Okay, the Hill District is getting this grocery store,’” says Dubowitz. “We wanted to understand what it meant for residents in terms of where they shopped, what they bought, and what they ate.” She wanted to track the way the community changed, and since Homewood wasn’t slated to get a grocery store, they used Homewood as the control neighborhood.

The study found that the Hill District did undergo some changes, but upon digging deeper, Dubowitz found the notable differences weren’t between the people who went to the new Shop ‘n Save and those who didn’t—rather, it was between those who owned homes and were able to stay in the neighborhood, and those who didn’t and were forced out because of increasing rents and prices for services.

“In the past few years, the Hill has undergone all kinds of changes,” said Dubowitz. “There have been major investments in housing, which have improved life for some people but relocated others. What we’re finding is that for people who own their homes, satisfaction has actually increased.”

Given the long history of racist policies that determine who can own a home in cities around the country, organizers in Homewood—and other neighborhoods around Pittsburgh and elsewhere—are focused as much on food access as economic development. That’s where programs like Sankofa and BUGs enter the picture, by providing jobs and training in the Homewood community, and a greater chance for resident ownership by teaching young people financial skills that will help them down the road. Jones says that a food co-op can be a commercially viable business enterprise, and she also sees the potential for financial solvency in community gardens. 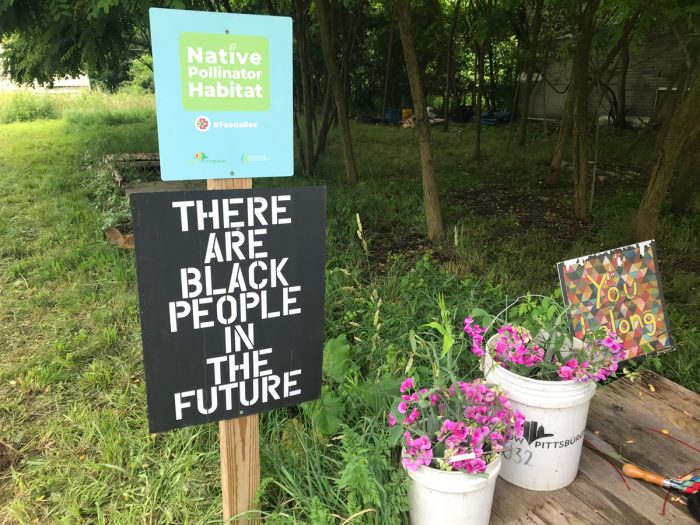 “In five to 10 years, there are going to be new career opportunities to grow hemp, hops, hardwood, and even medical marijuana,” she says. “Our kids need to have that opportunity. They can make $45,000 a year as growers. We need to get these kids ready for that.”

In order to create some higher-value opportunities for her students, Jones has planted a portion of her farm with luffa, a vine in the cucumber family that forms the basis for natural luffa sponges. She sells the sponges on the farm, but has plans to sell them wholesale to retailers around the city. She’s also helped her students learn how to make soaps, which bring a much higher price on the market than produce.

Although the money from the sale of the luffas and soaps is useful, perhaps the real value comes from the case studies they provide, which teach important business skills. By offering job opportunities and financially viable business models, she’s bringing the potential for neighborhood equity to a community that has, for generations, been disenfranchised by those who own the land.

“We know gentrification is coming,” Jones said. “But let’s come to the table at the beginning of the planning process.”